Kashgar is not a big city be Chinese measures, but definately by Swedish. We loved being in a proper city again. It was wonderful to walk on busy pavements, drop into shops and just look at the city life. Our shopping tour got us two out of three things we needed.

Hard drive
We take a lot of photos and make many videoclips. The hard drive on our computer is soon full and we needed to do something about that. The solution was to go to a shop and buy a new external hard drive which has now enabled us to make some free space in the computer’s hard drive. The shop in the department store where we bought the new hard drive looked very much like one of those in good old Panthip Plaza in Bangkok.

SIM-card
The day before leaving Kashgar we also bought a chinese SIM-card to use in our iphone. It ”only” took two hours to explain what we wanted but still we haven’t got any answer to the very important question of how to re-load it with more money… We hope our new SIM-card will enable us to communicate more frequently with e-mail and blog updates even from our cosy tent.

Pump
Our pump shows signs of wearing out so I cycled to the only good bike shop in Kashgar only to find that they had no pumps for tubes with car valves… Maybe I should have tried at the local bazar instead – at least the bazar in Osh had the kind of pumps I was looking for.

Time to go
We liked our cosy hotel room in Kashgar and didn’t really want to leave. However, the visa clock has started to tick and China is a big country so there was only one thing to do and that was to get up on our bikes and start cycling. 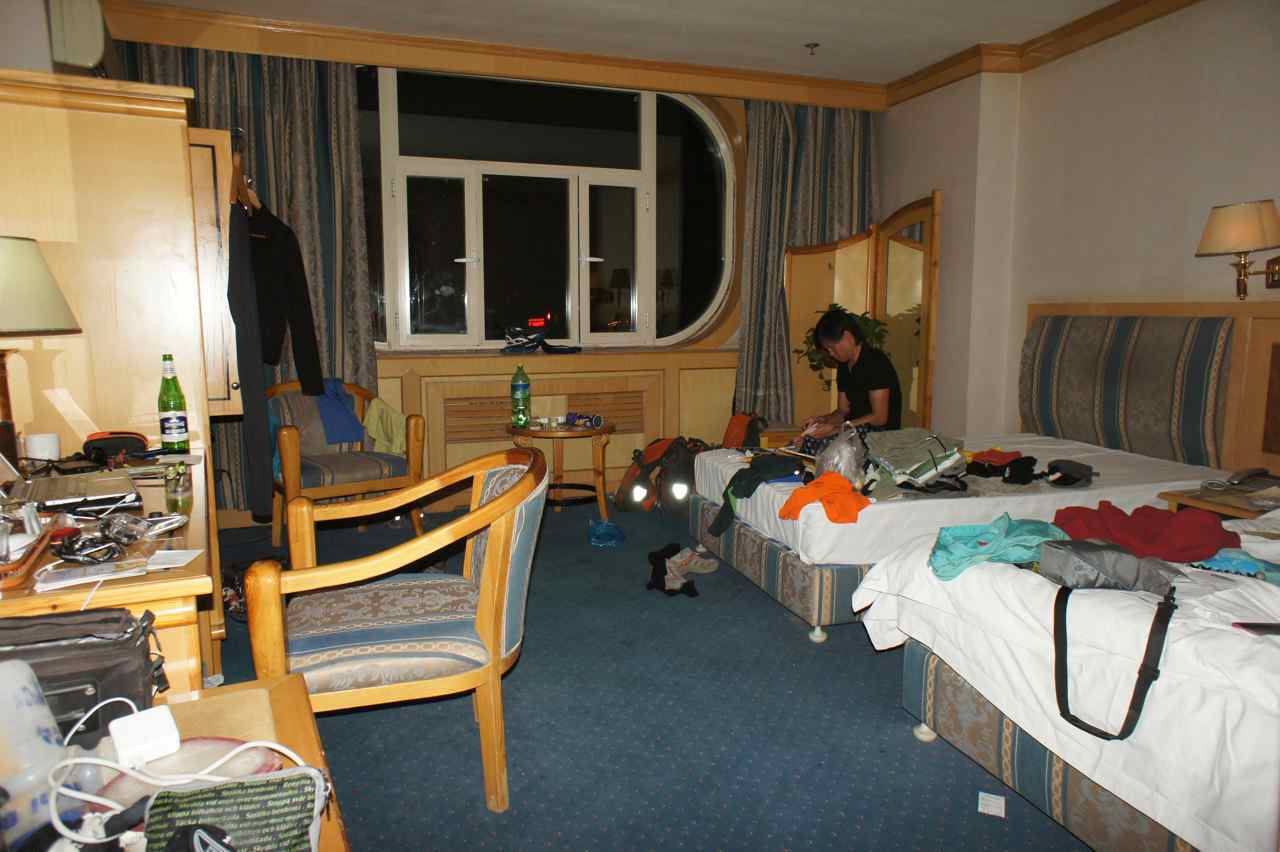 Our nice hotel room in Kashgar. We thought it was nice be we would soon find better ones

Our strategy for China is to push a little bit harder than usual in the beginning in order to crack the backbone of the distance through China within a month. The first part doesn’t have so many sights and we think it is the landscape that is the attraction and this we can enjoy from our saddles. 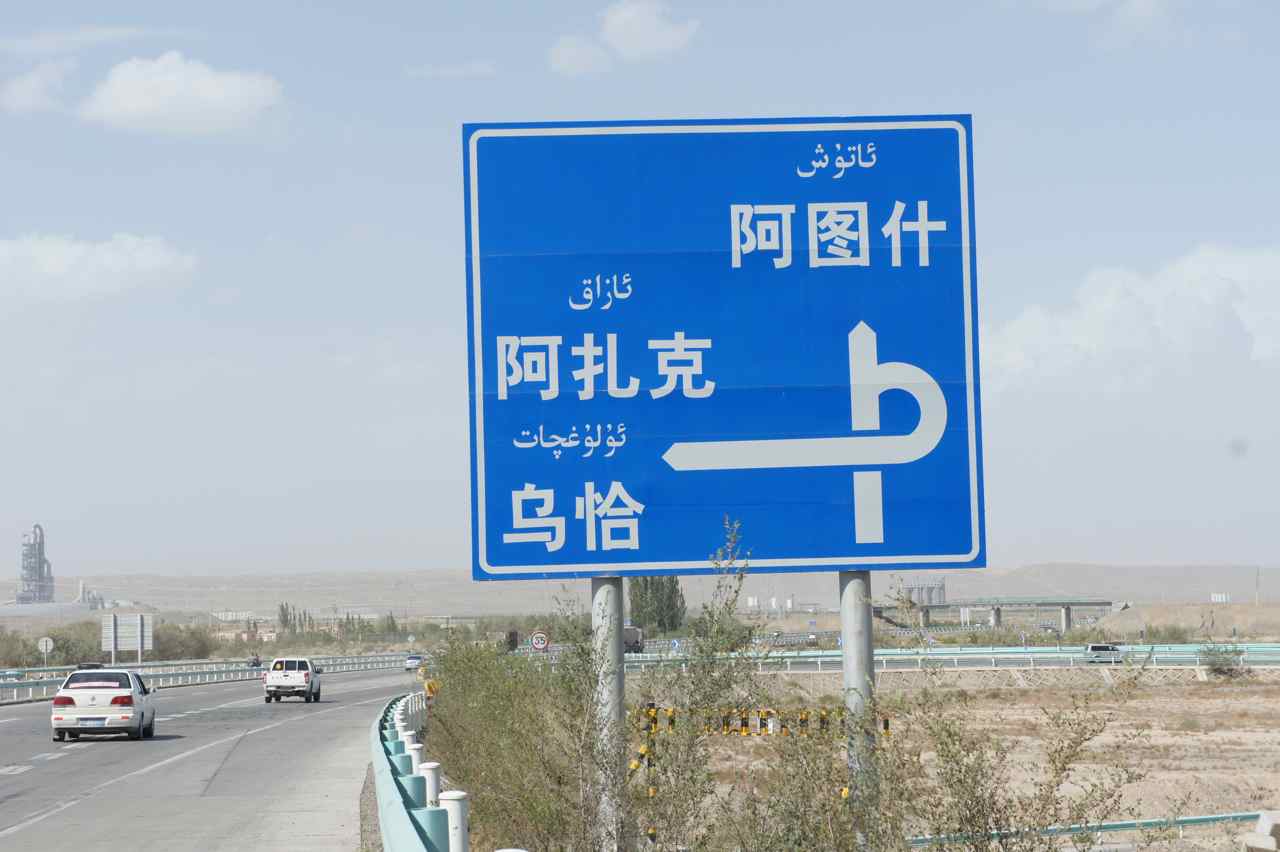 Day 101
We had spoiled ourselves at the hotel in Kashgar and when we looked out of the window the morning we were leaving we saw a cloudy sky and it looked like it was cold. Once outside it turned out to be not only cool but also windy.

Our last minute shopping adventures resulted in a very late start from Kashgar. It looked more like a bush landscape and we only managed to get the 45 km to city of Artux.

When looking at the map we thought that Artux would be a smaller community, like a small town on the countryside that would perhaps not even have a hotel. Maybe it is small when measured by chinese standards, but when measured by Swedish it was a big city. It was already late and rather than riding past the city we decided to go in and try to find a hotel. The one we found was very nice – it was even better than the one in Kashgar 🙂

Day 102
This was another cloudy morning and the temperature was cool (20-24 degrees) and if it hadn’t been for the headwind it would have been a perfect day for cycling.

The eastern bound road north of the Taklamakn desert was more boring than we had hoped. The mountains on our left side was nothing special and on our right side the desert didn’t look like a proper desert. There were also almost no gas stations and restaurants along the way where we could buy supplies or eat. When we finally arrived to a village after about 100 km we stopped to have dinner and buy lots of water before continuing to find a place to pitch our tent, which turned out to be 15 km outside the town.

A stealthy camp site behind some bushes

Eventhough the wind got less strong in the late afternoon we wanted to anchor the tent thoroughly. This turned out to be a difficult task since the ground was a loose mix of sand and soil and we had to move the tent a few times to find a spot where the tent pegs would get some grip.

When we went to bed the wind was completely gone – a very ironic situation after having struggled in the headwind and then worked hard to anchor the tent…..

Day 103
We woke up to the sound of rain and a strong wind on the wrong side of the tent. It wasn’t difficult to decide to stay in the warm sleeping bag for another hour. When we finally crawled out of the tent we discovered it was cold and windy from the wrong direction and still a bit rainy.

This kind of weather is completely different from what we had expected. We are riding along the Taklamakan dessert and it is supposed to be hot and dry, not cold and rainy…. 🙁  We do wonder if it is the end of summer that we are experiencing or if it is just temporary bad weather.

The road had an intense traffic but it also had a wide shoulder to ride on. The problem was that there were so many sharp small stones on it and in the late afternoon the inevitable happened – I hit a sharp stone and my front tyre got flat.

We didn’t see much of the scenery during the day. The cloud base was low and the clouds obscured the mountains. Looking at the mountains is our only form of entertainment and now they were hidden behind the clouds. 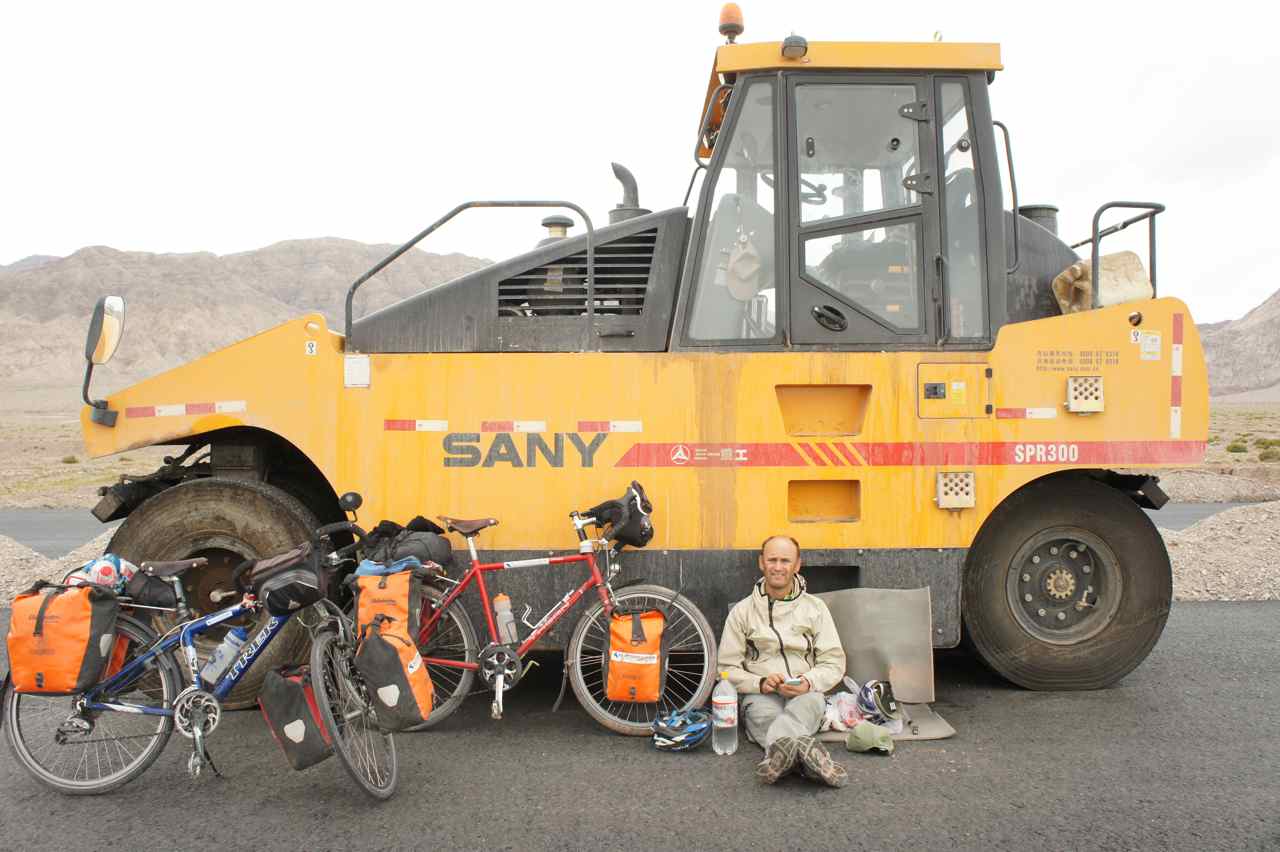 Resting beside a construction machine during the windy Day 103

The road leading to Kashgar on the northern side of the Taklamakan dessert is being rebuilt. It is actually more correct to say that they are building a completely new motorway beside the old road. The new motorway is sometimes very close to the old road and sometimes up to a kilometer apart. When we saw a local motorcyclist turning onto that un-finished motorway we decided to follow and found an almost ready motorway that was completely emtpy. Pity that we found out about this road too late in the day.

Just like yesterday we didn’t pass any gas stations or villages at all until the end of the day when we arrived to a village which seemed to live on being a food stop for truckers and long haul buses. After having ”lagman” (noodles and meat) for the second day in a row we left the town with our water bottles filled.

After having gone through the evening routines the wind ceased. We started to seriously ask ourselves if we should start to ride on the half finished motorway during night time instead. 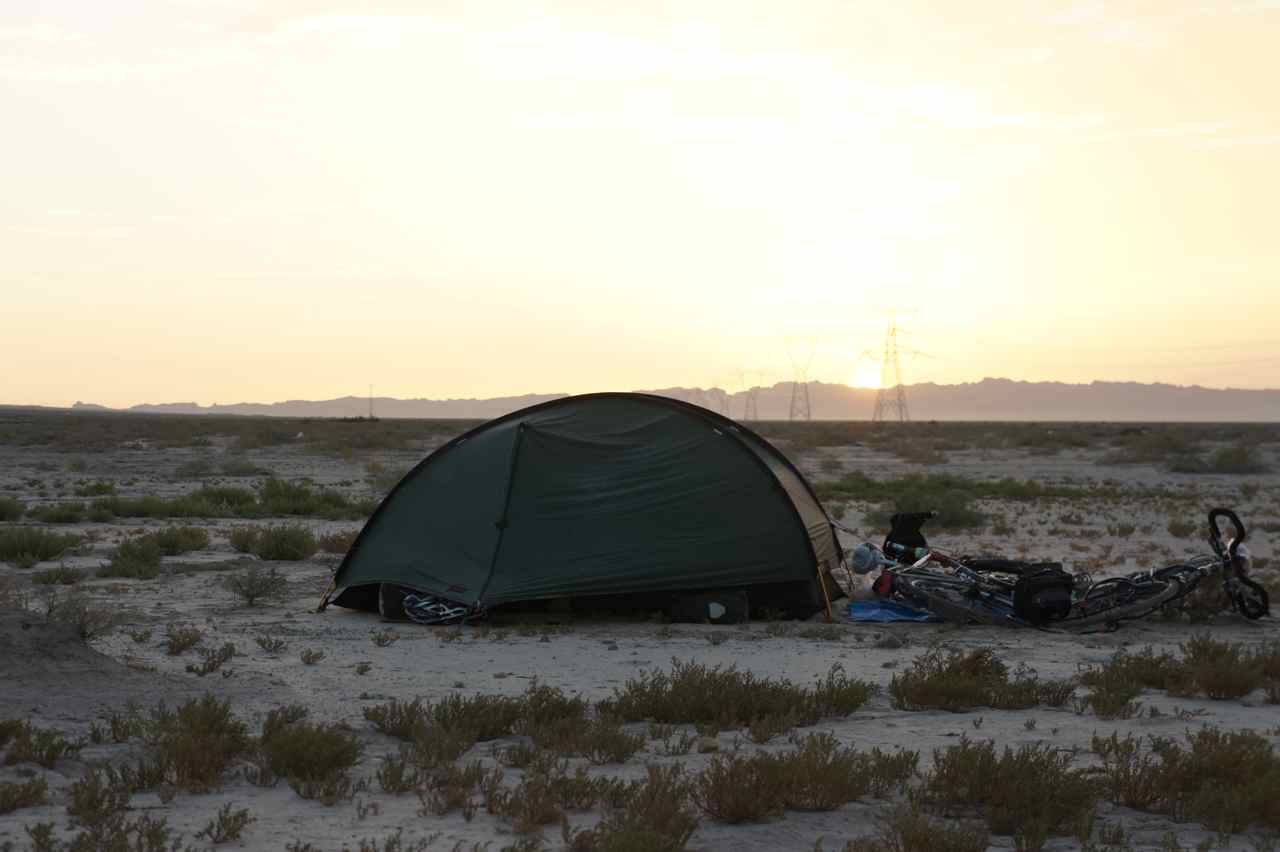 Our camp at dawn of a promising day

When we sat and had a cup of tea before going to bed the truck traffic increased quickly over just half an hour. There are always a lot of trucks on the road, but now there was an endless caravan. It would be a nightmare to drive a car and try to overtake those trucks. Maybe there is some kind of regulation banning them from using the road during daytime.

Day 104
This morning was very different to the two previous mornings. Sunshine and best of all – no wind. The bad mood and low motivation of yesterday was gone and replaced of enthusiasm and happiness. 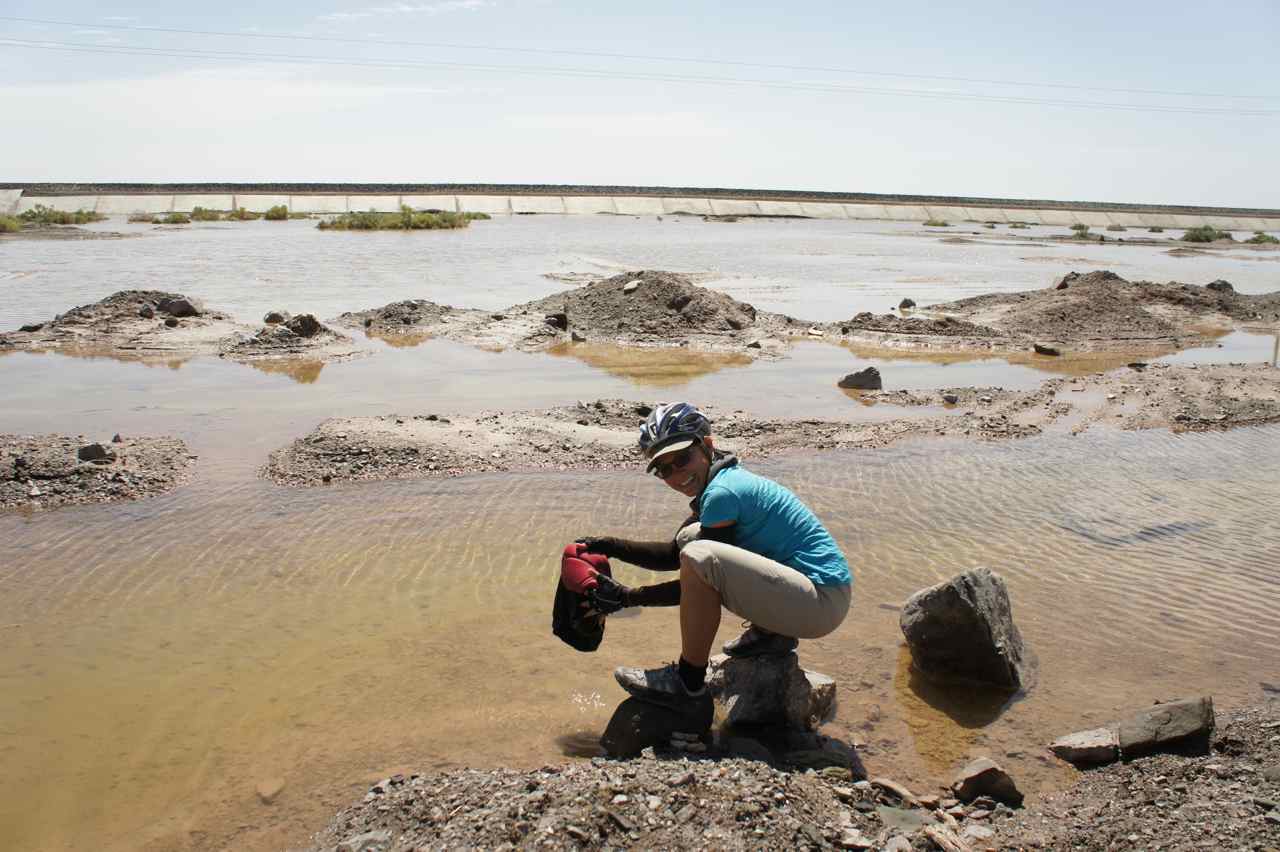 This day we decided to ride on the un-finished motorway from start. There was no traffic apart from some vehicles being used by the road workers so we had to road all to ourselves. We could ride at high speed (around 27 km/h) and after our lunch break we decided to try to push a little harder in order to reach Aksu which would make a total distance of about 200 km. 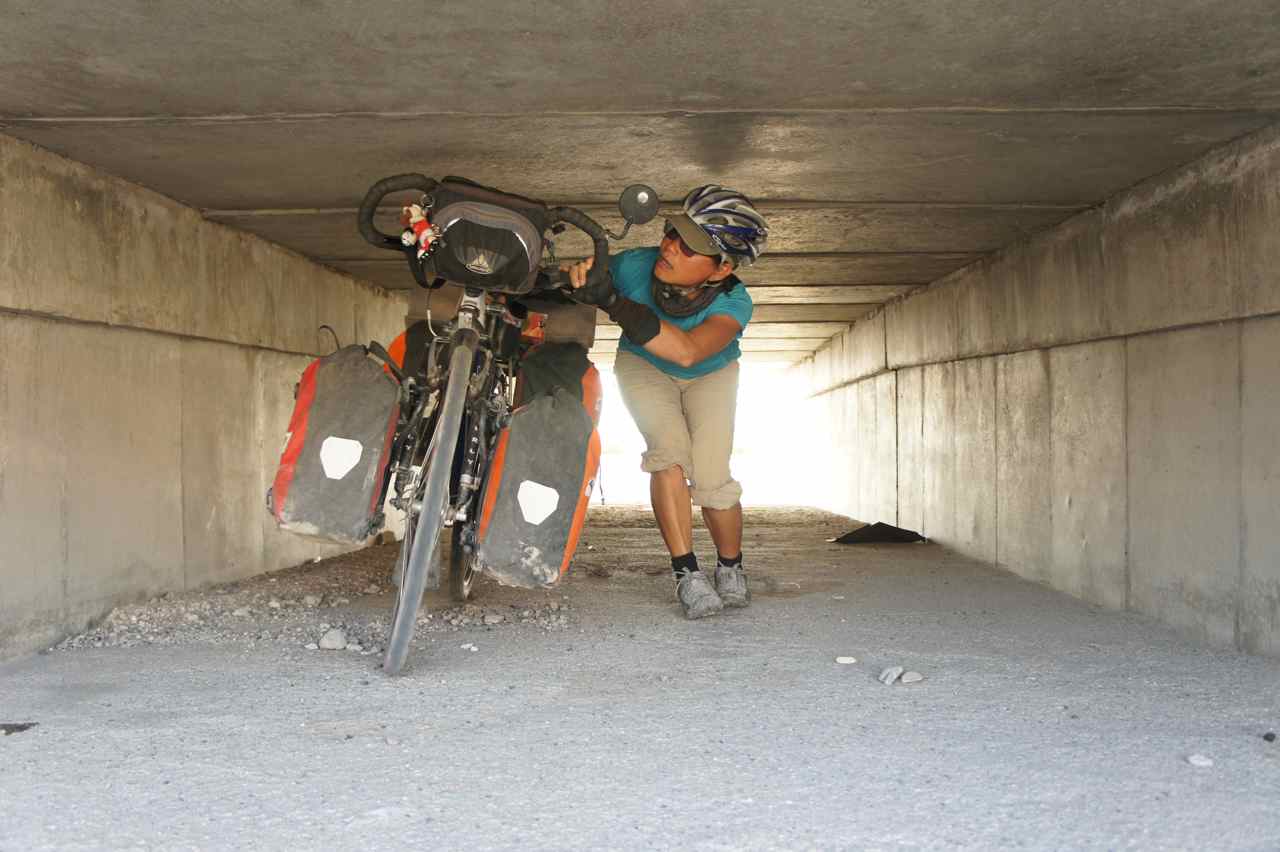 Knowing it is important to eat and rest before getting hungry and exhausted we stopped and had a break every 25-30 km. We still had the motorway to ourselves but late in the afternoon we understood that it would be a race to get to town before sunset and we almost made it. At least we managed to get past the industrial suburbs and into the city center before it got dark. 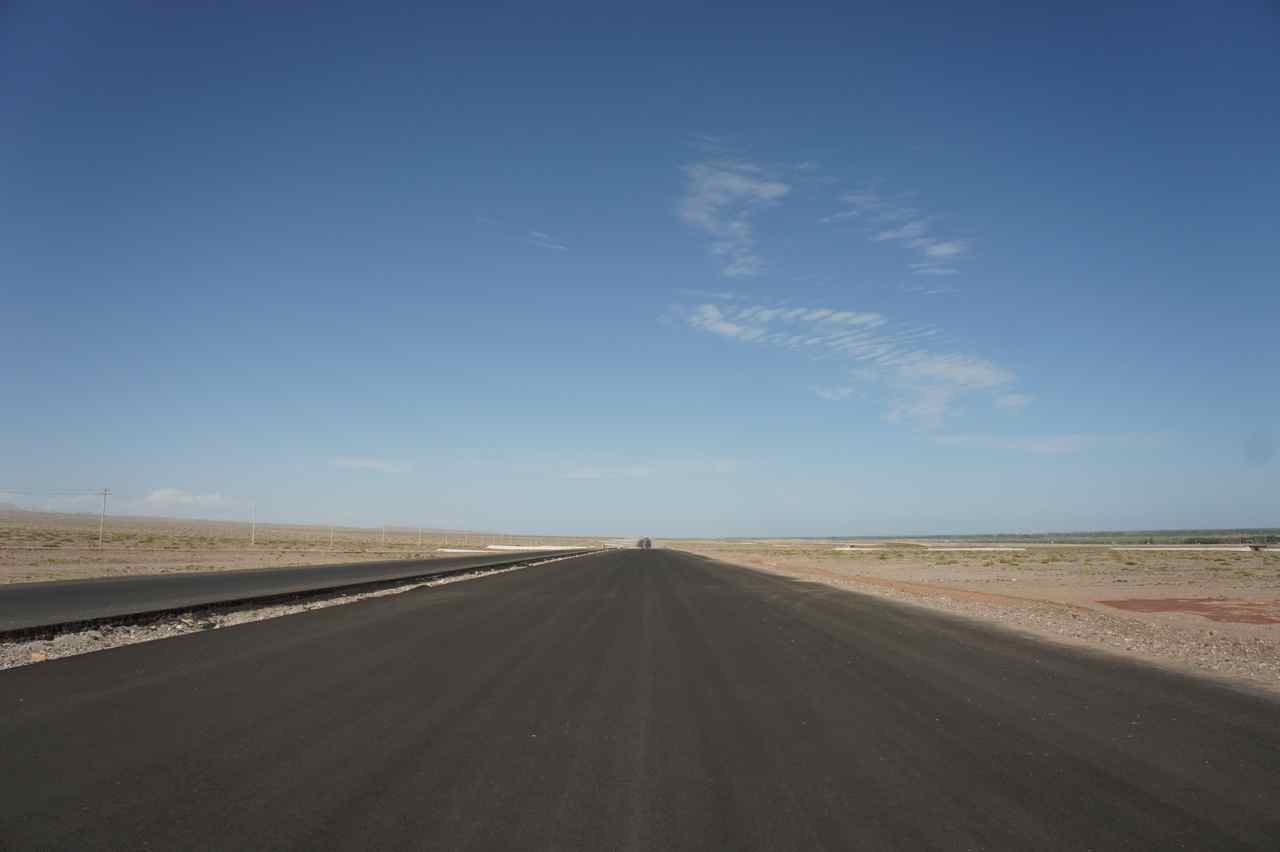 We wanted to stay at a hotel and had made notes of the addresses to a couple of hotels. When we checked in at Pudong Holiday Inn, we found the best hotel room so far during the entire trip and the price was only 30 € for both of us including a huge chinese buffet breakfast. Our plan is to camp 2-4 nights and then stay at a hotel and the hotels we have stayed at in China have been better and better so let’s hope that this trend continues.