We got lost when we left Korla and didn’t find the way back to the motorway. Instead of riding on the smooth tarmac we ended up leaving the town on a small dirtroad that took us through the industrial areas at the outskirts of town. There was an intense traffic of trucks and we felt much more unsafe on this little side road than on the big motorway and our intention was to get back to it as quickly as possible. 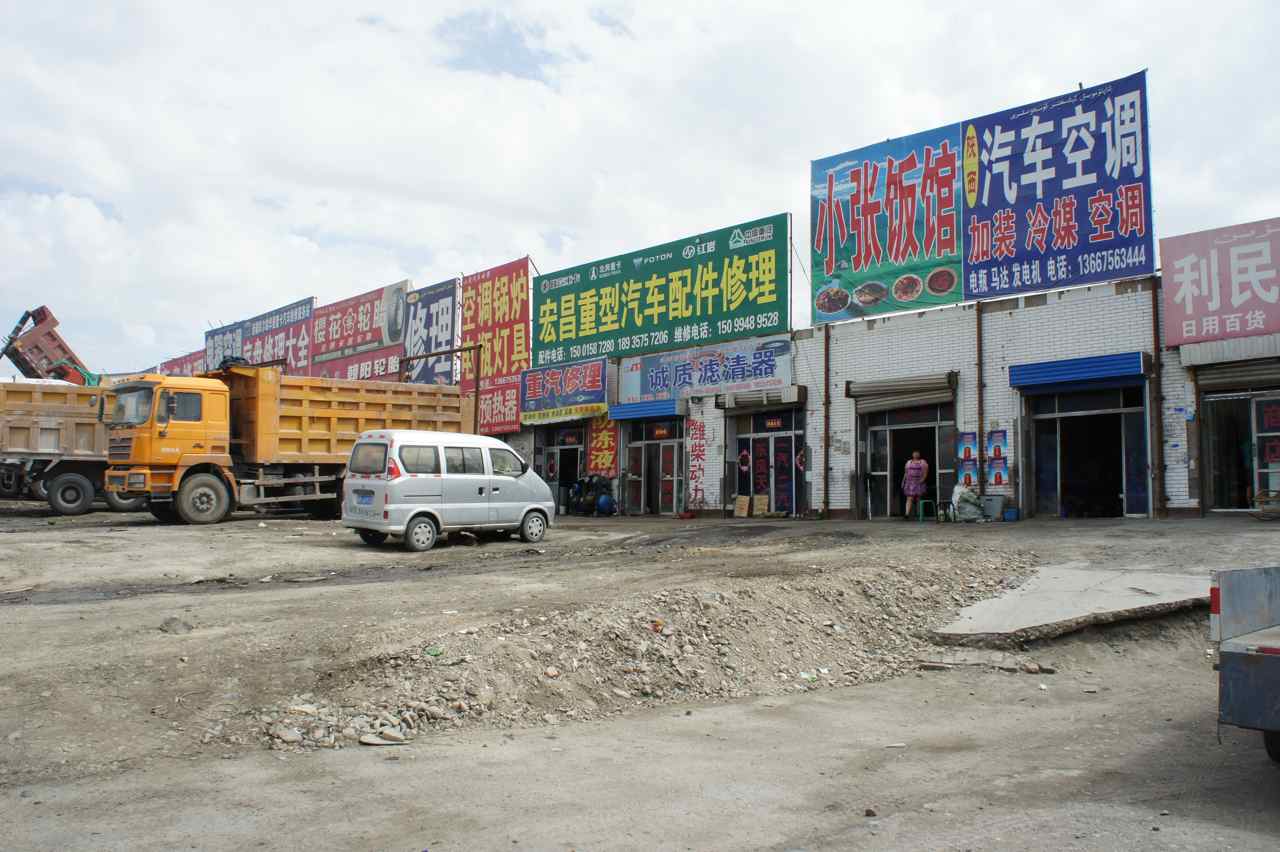 Shops in the outskirts of Korla

Although Korla is a oasis city with lots of greenery, parks and tree lined avenues, the desert is not far away. Right after having left the industrial areas of the town we got this view which clearly shows how close the desert and the city are to each other. 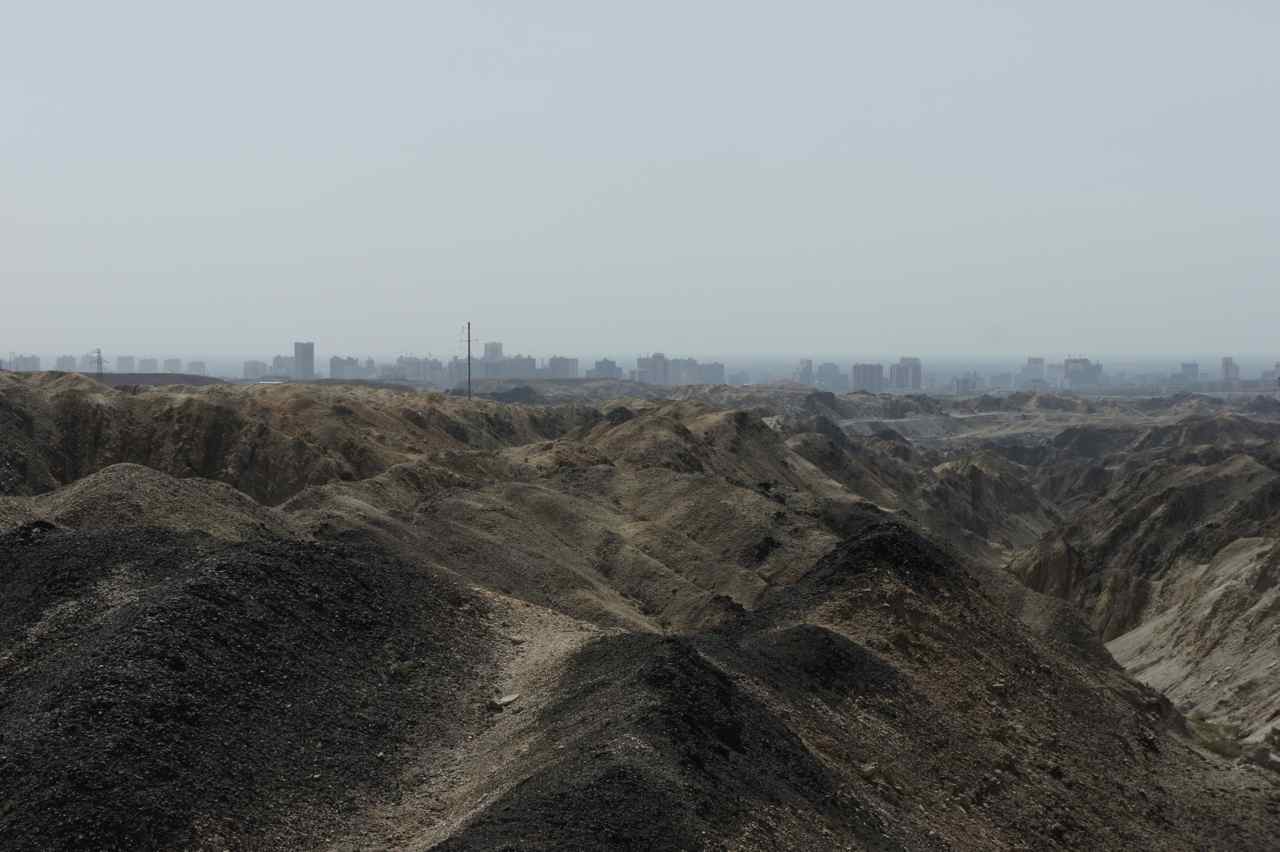 Leaving town on a backroad took us through some very beuatiful mountain areas. The road was steep and the surface was just gravel but there was very little traffic and we could enjoy the scenery undisturbed by cars and trucks.

We followed this little backroad as it twisted itself through a valley, but all of a sudden it was going to pass under the motorway. There was a staircase down from the motorway and we wouldn’t allow ourselves to miss an opportunity like this and quickly carried our bikes and luggage up to the big and nice road where we could continue at a much higher speed.

The desert is dry – that is actually the definition of a desert – but there are exceptions. When we approached the city of Yanqi we went across a bridge over a river leading from the Tian Shan mountains to Lake Bosten. This lake is half the size of lake Vättern in Sweden and we saw a number of signs for seaside (lakeside?) resorts with pictures of kids playing on banana boats…..

When we passed this stream we could see herons and other seabirds in or around the water. Seeing a heron in a desert is something I never would have expected. 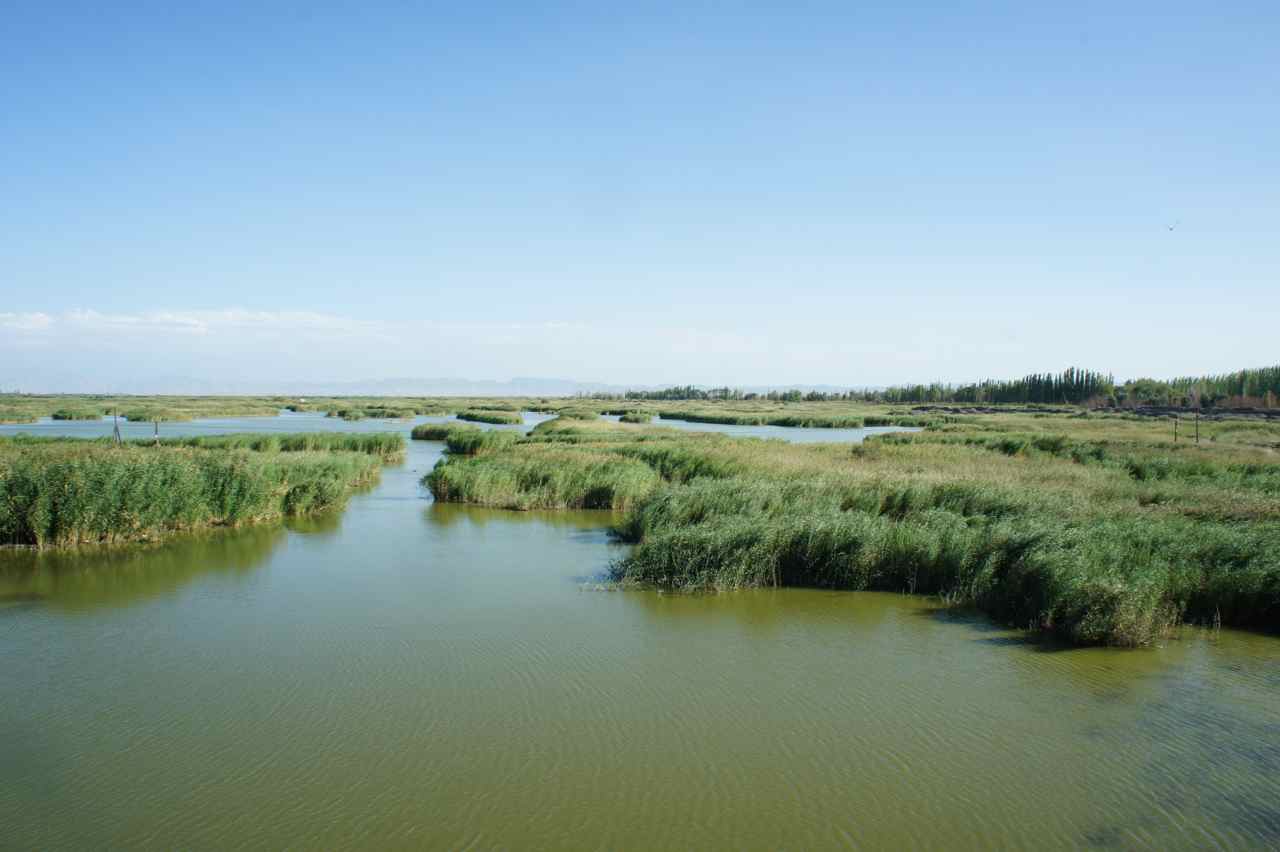 The heron has just left….

When we got closer to the city of Yanqi it turned out that even this city would have been a big city by Swedish standards. It has a lot of high rise buildings in the centre and in the surrounding areas we could see numerous construction sites where large apartment blocks were being built. 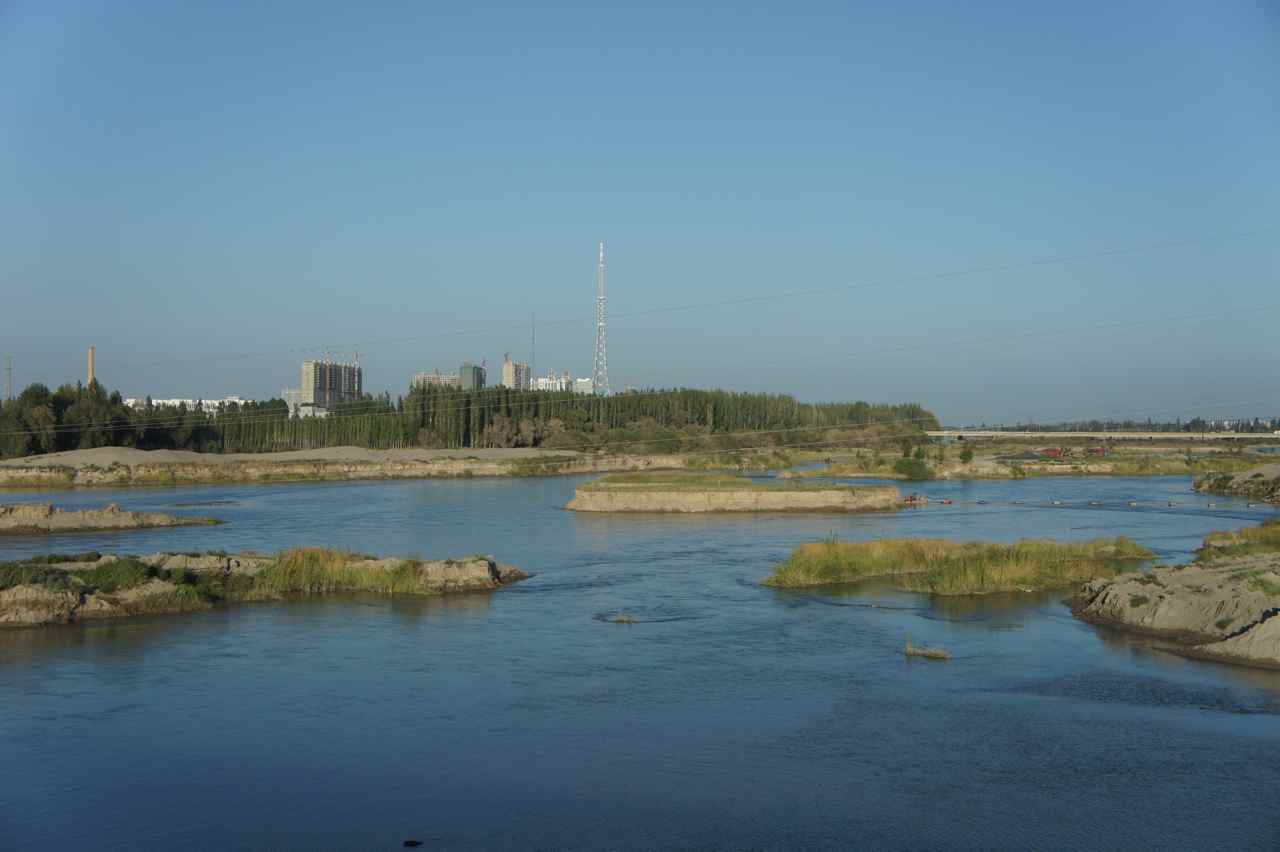 Yanqi behind the river

Korla and Yanqi are not far apart, only some 60 km. Our intention was to have a half day of rest and start late which meant we couldn’t expect to get any further than Yanqi. We didn’t want to camp and went into the city to find a hotel to stay at. For the first time we ran into the trouble all foreigners traveling to cities off the beaten track in China sooner or later have to face – finding a hotel. Hotels in China needs a special license to be able to host foreigners.

The first hotel we asked wouldn’t host us but told us try at another further down the street. On the way there we found another one that labelled itself as a business hotel. Wej went in to ask but was denied and told to go to another hotel. The front desk staff helped her by drawing a map how to get there. 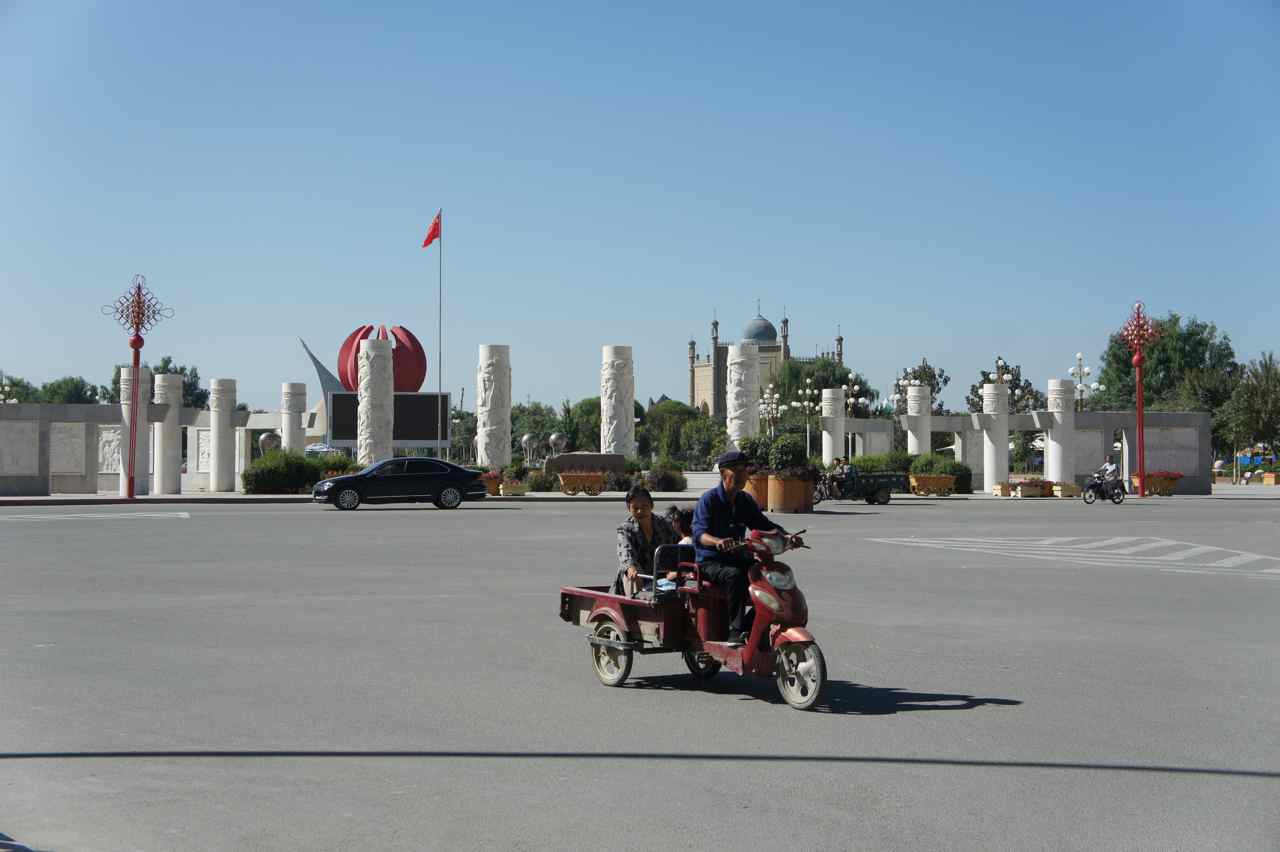 From our hotel next to the “people’s square” in Yanqi

We find it very interesting how a hotel in an country so reliant on export as China is, can call itself ”business hotel” while not being able to host a foreigner.

When we later arrived at the only hotel being able to host us Wej went inside to check in while I waited outside. A young boy at the age of around 5 walked past me holding his parents hands. He was so surprised to see me and stared so intensly that his eyes almost popped out. When he had passed he almost walked backwards staring at me while his poor parents seemed to be embarrased for his behaviour.

As we made eye contact the parents lost their embarrasment. I told the boy to come and shake my hand and his parents encouraged him. He walked slowly as if he was approaching a kid eating monster…. 🙂

All the way we have got used to be the odd ones, but here in China it is only me. Wej blends in and everyone seems to think that she is chinese, which is not completely wrong. Nobody expects me to be able to speak chinese so every time Wej is approached by curious people I can take a step back and pretend to be a kid eating monster.

The ride from Yanqi towards the town of Hoxhud was not very interesting. It was the same old motorway and the same old mountains. After a stop at a gas station just after a tollstation we continued towards the next service area some 110 km away where we intended to camp. 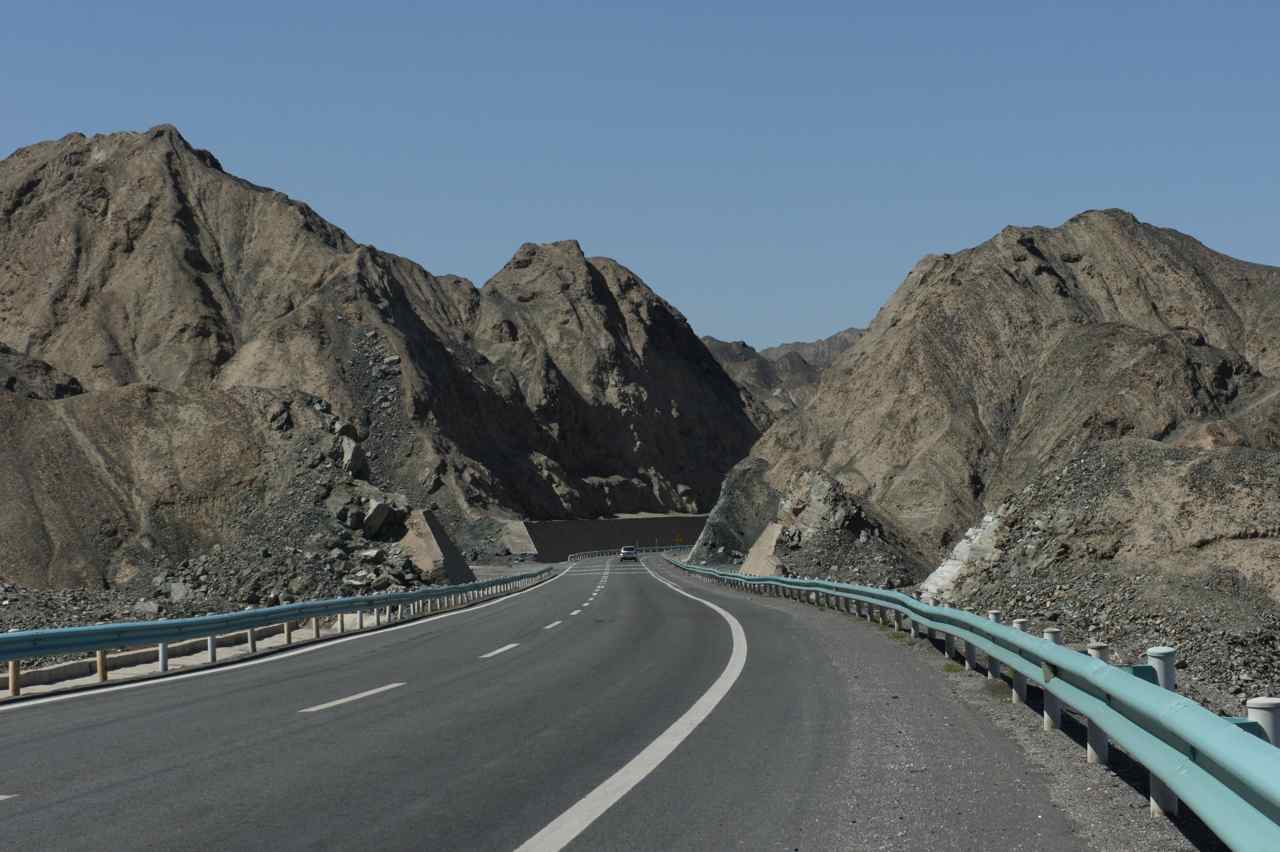 Heading to the mountains

Before reaching that service area the road crosses the mountain ridge that we having been cycling along for almost two weeks and that we have got bored starting at. When going across those mountains we got some very nice views. The landscape changed from rather boring to very fascinating within only a few kilometers. 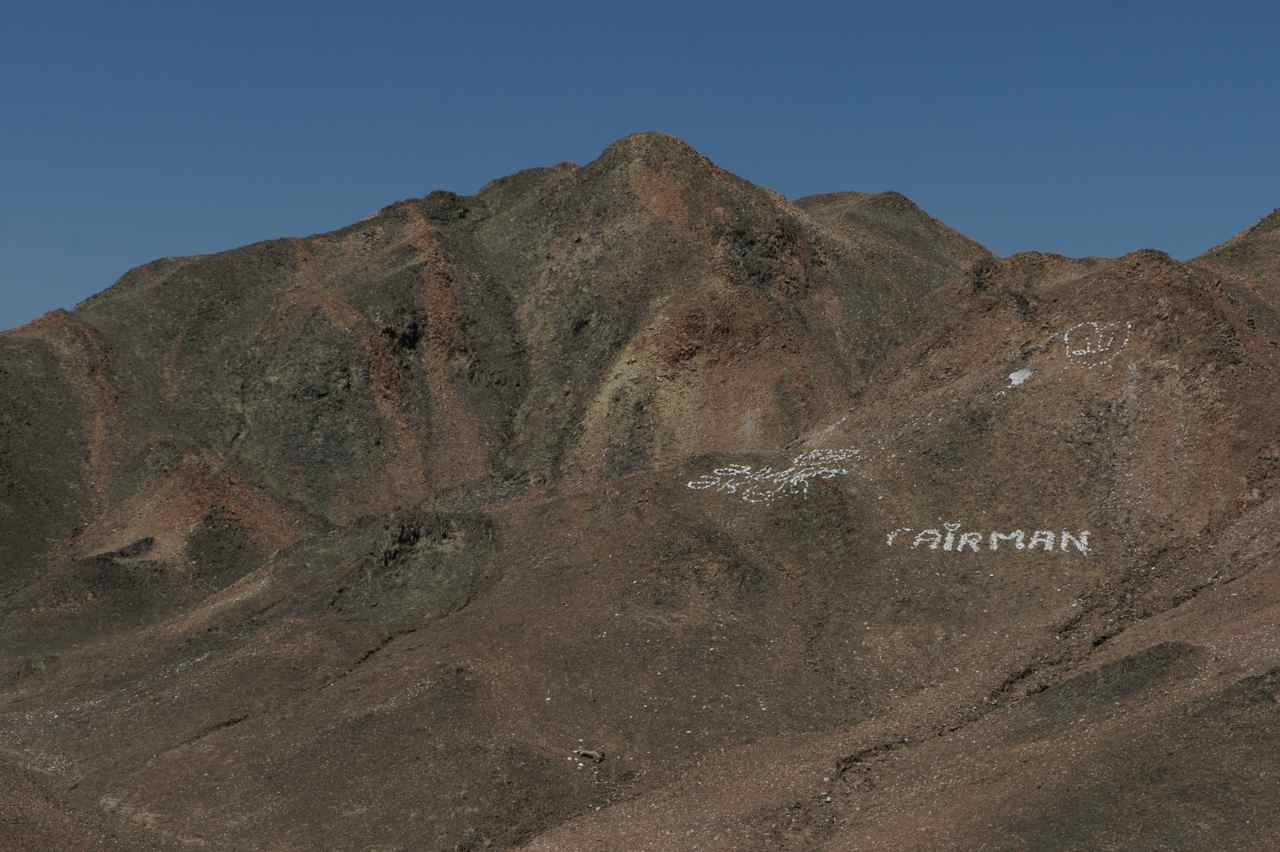 New type of grafitti – white stones on the red mountain side

On the way down we got some very nice downhill sections where we overtook many trucks that descended from the mountains at very low speed using their lowest gears. At one of the turns we saw something we didn’t know what it was. It looked like a ramp beside one of the sharp bends of the road. When we got closer we saw that the ramp was signposted many times and covered by a thick layer of gravel which made us believe that this was a ramp where runaway trucks that have lost their capactiy to brake can get their vehicles to a stop. 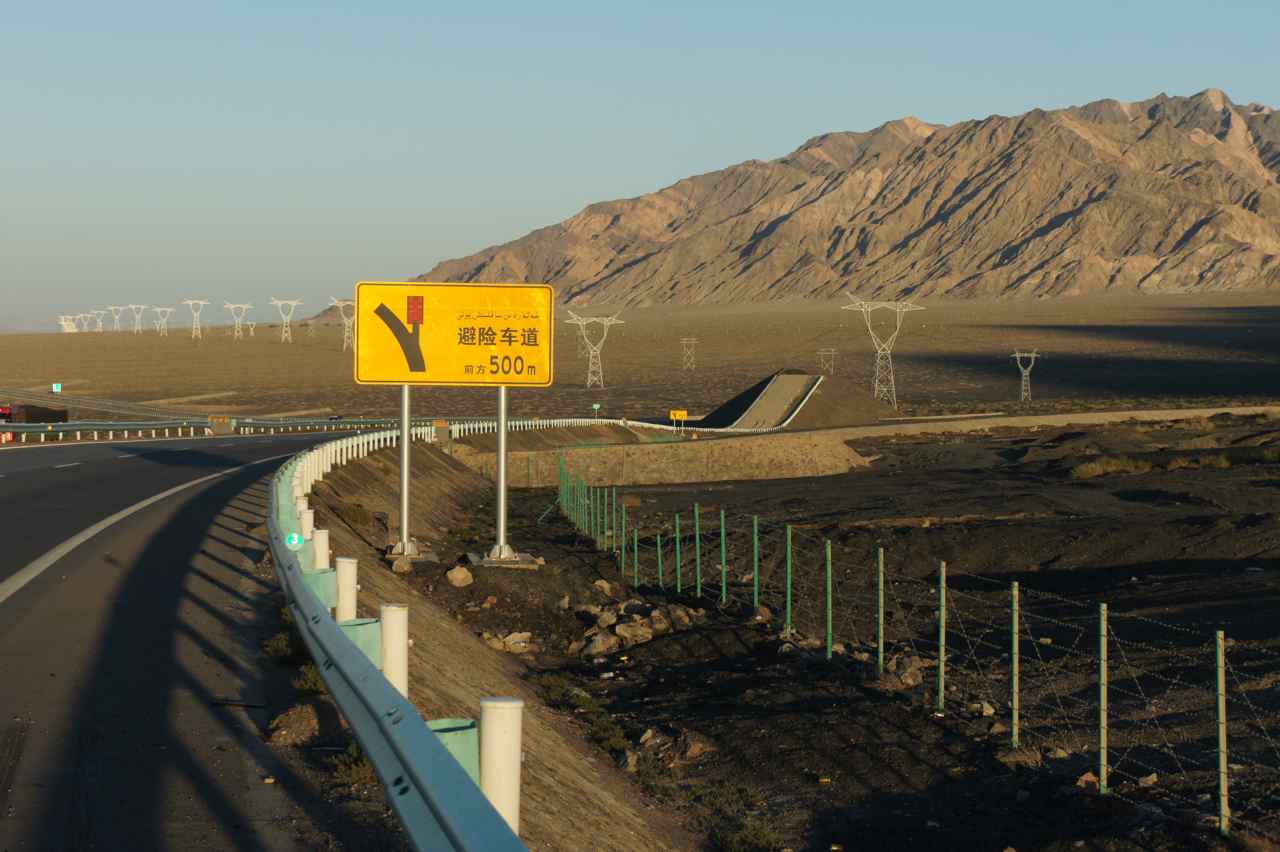 Ramp for runaway trucks to stop at 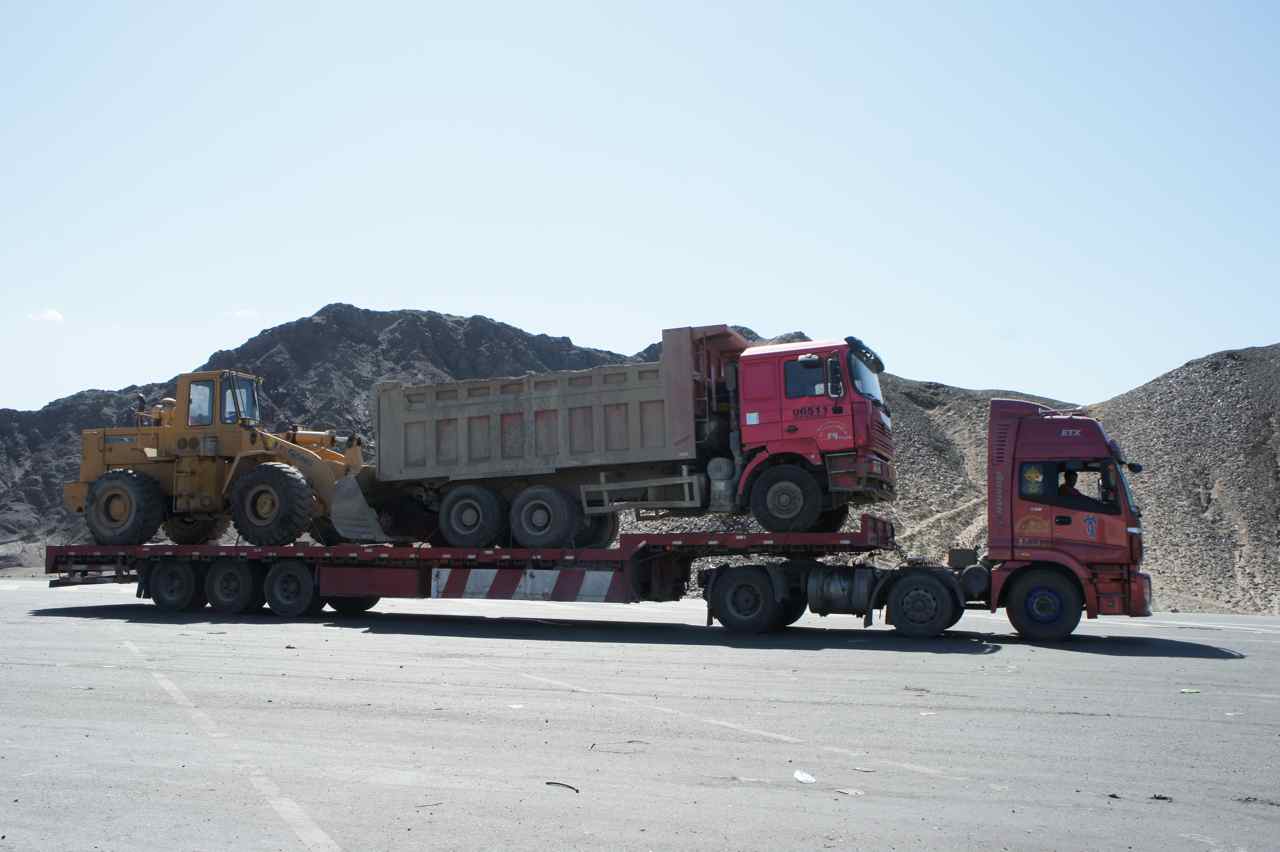 If two empty trucks are going the same way, then it’s smarter if one carries the other… 🙂

I have never seen such ramps before but I have now learnt that they are common in mountainous regions throughout the world.

On the day we cycled to Toksun we started at around 1000 meters altitude and climbed up to 1750 meters. It was a smooth climb on the shoulder of the motorway. We stopped many times to take photos of the very beautiful landscape. When it then was time to descend we would loose very much altitude. Toksun is located in the Turpan depression which is the lowest lying area in China. The deepest part of the depression is around 150 meters below the sea level. 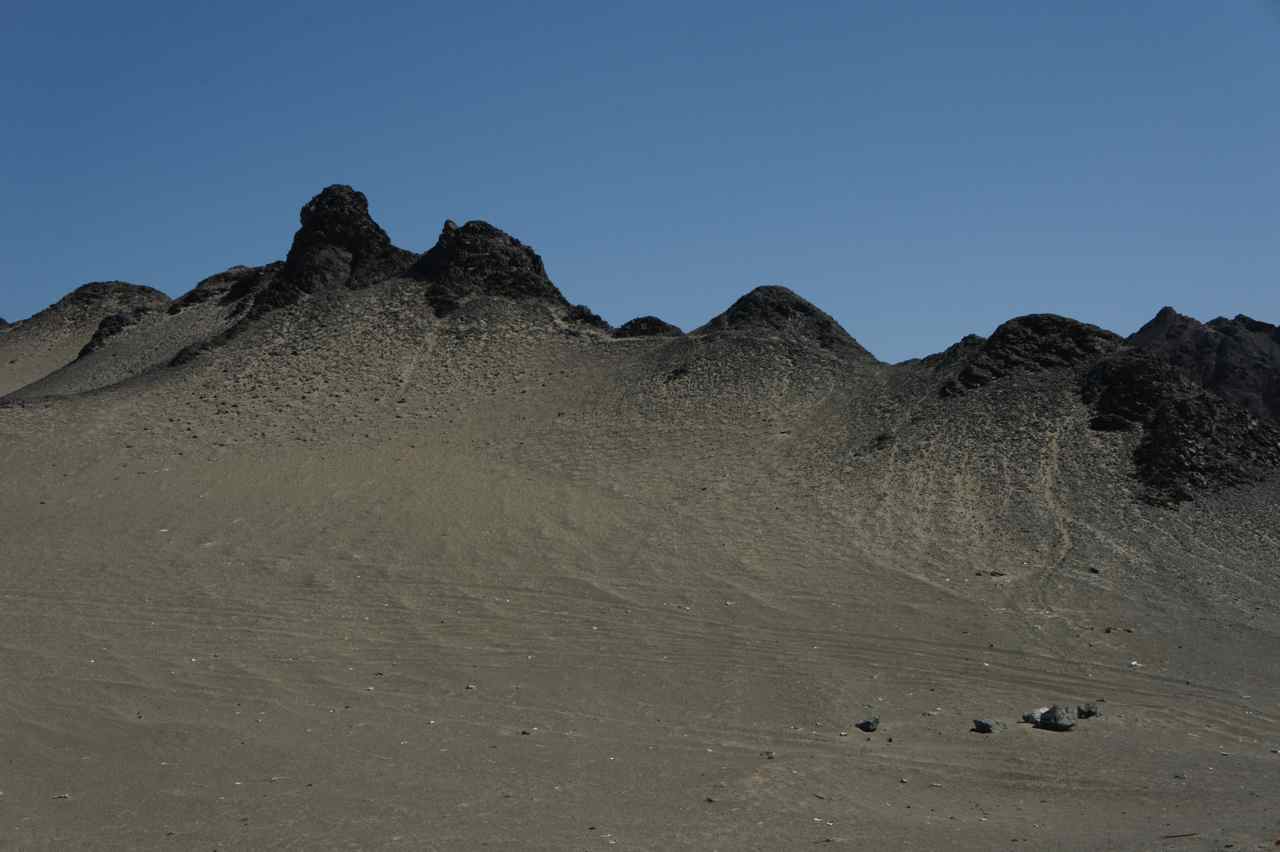 Beautiful shapes in the desert

When we descended we felt it got warmer and warmer and when we reached the outskirts of Toksun the heat was almost unbearable. Just as we rolled into the first eatery at the entry to the town I got today’s first flat tyre. I only had to walk the bicycle 5 meters and could fix it in the shade at the restaurant. It wouldn’t have been fun to change innertubes in the heat outside that restaurant so I didn’t complain. If to get a puncture in extreme heat it is good to get it 5 meters from where you would have stopped anyway…. 🙂 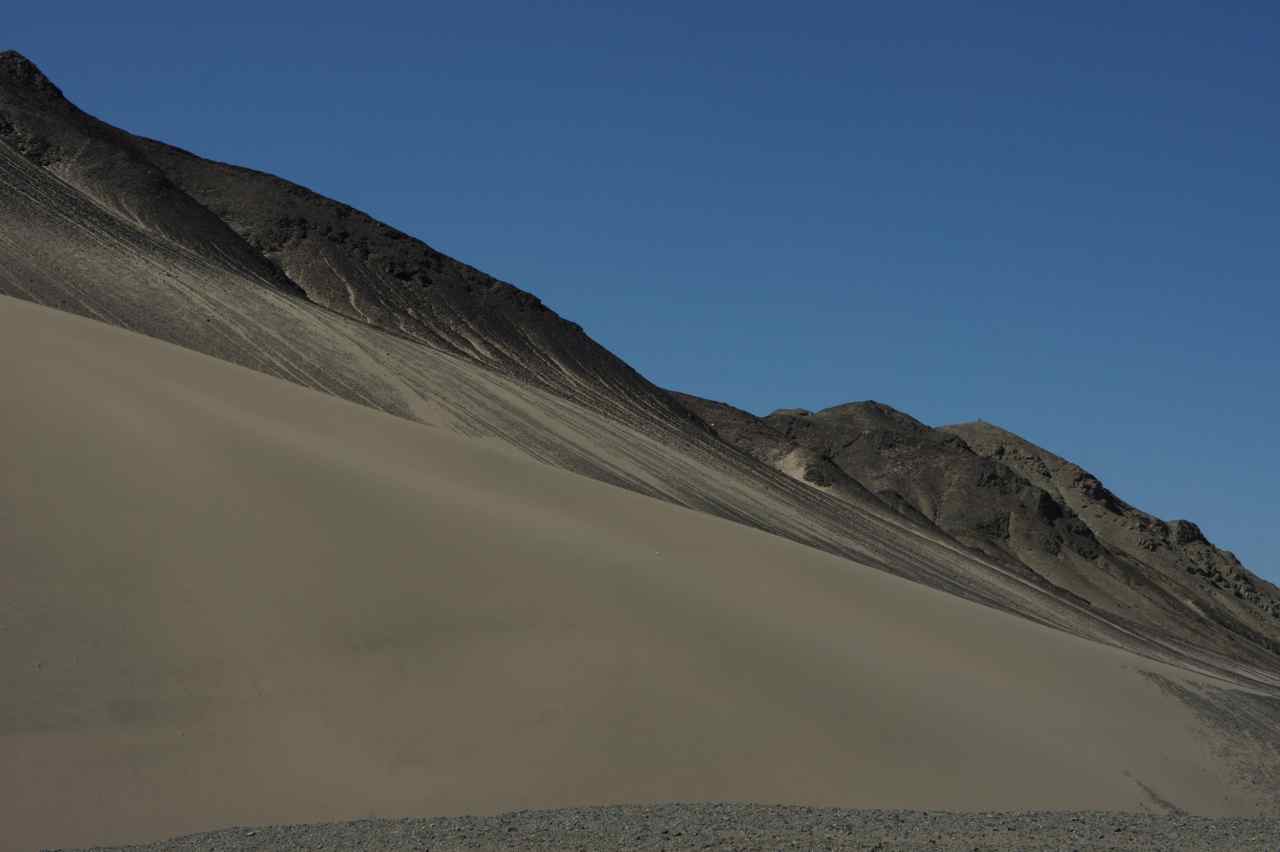 We stayed quite a long time at the restaurant to both eat and wait for the cooler evening hours. We planned to cycled through the city and camp outside, but in an intersection I got today’s second flat tyre. Since the sun was just about to set we changed to a new innertube in less than 10 minutes – we are improving our team work when it comes to fixing flat tyres…. 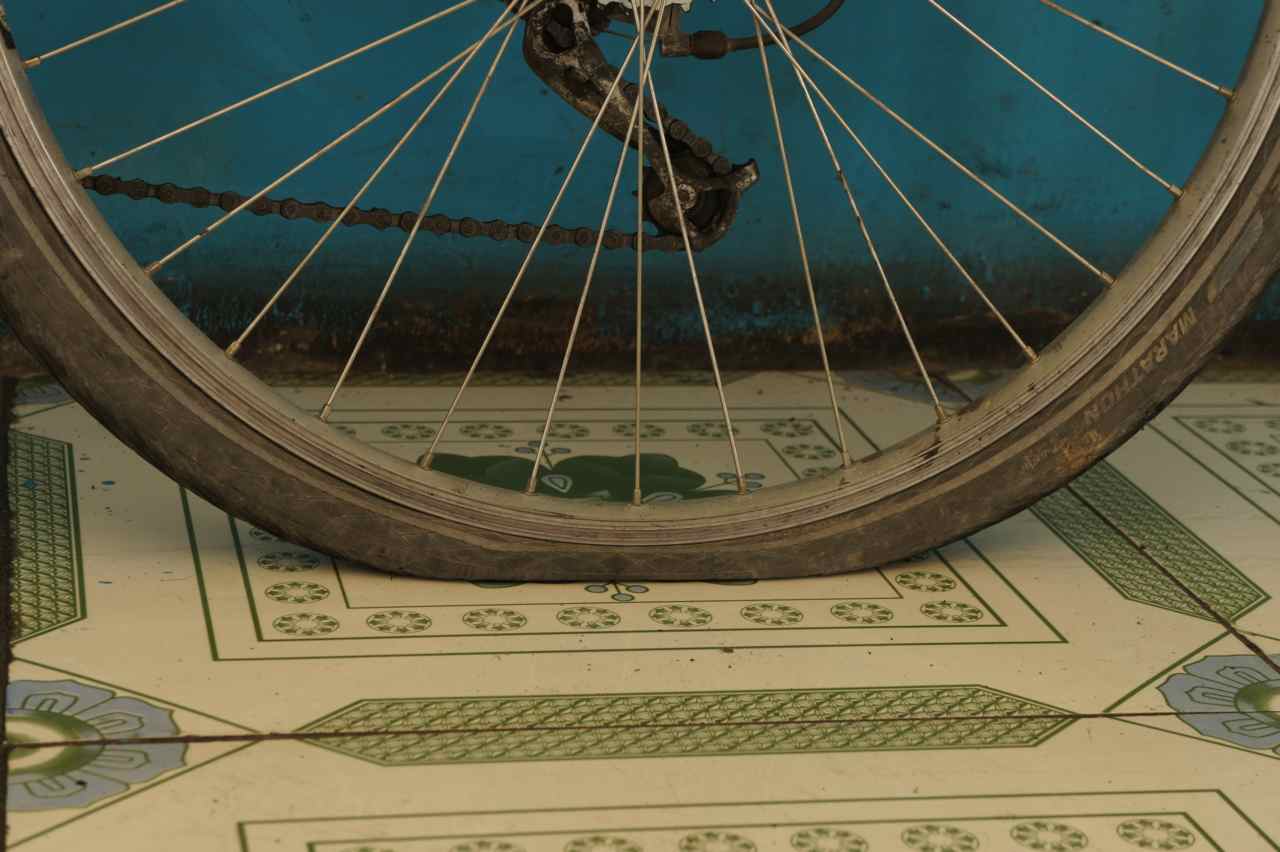 After some 5-6 km I felt that the wheel we jsut repaired got softer and softer and I suspected we had been too quick when repairing it. Too tired to fix it we turned into the first camp spot we could find which turned out to be next to an onion field.

The ride from Toksun to Turpan took us over a vast plain of stony desert. On the way down a hill I saw wind turbines. Not one, not 10, not 1000 but thousands. They were placed in the desert and they all faced to direction where we were going 🙁