A tale of rain and hills

Right now we are in an intensive cycling period and we try to cycle as much as possible and avoid any long stops. There are two reasons for this and one is that we want to get south and away from the autumn as fast as we can and the other one is that we need to think of our visa extension which need to be done somewhere around Chengdu by the end of this month or early October.

We try to not have any rest days now, but put in some days with easy cycling or days with only half the normal distances. The day when we left Minhe was such a day. We checked out from the hotel at 1 PM and started cycling at 2 PM. It was downhill and tailwind on good roads and to cycle 66 km under those circumstances was just like having a restday. The ride was not very exiting and after the last few days of cycling in a fantastic landscape there is really nothing comparable to say about this day’s ride. It was 66 pleasant kilometers on a busy road without any exiting sights along the way. 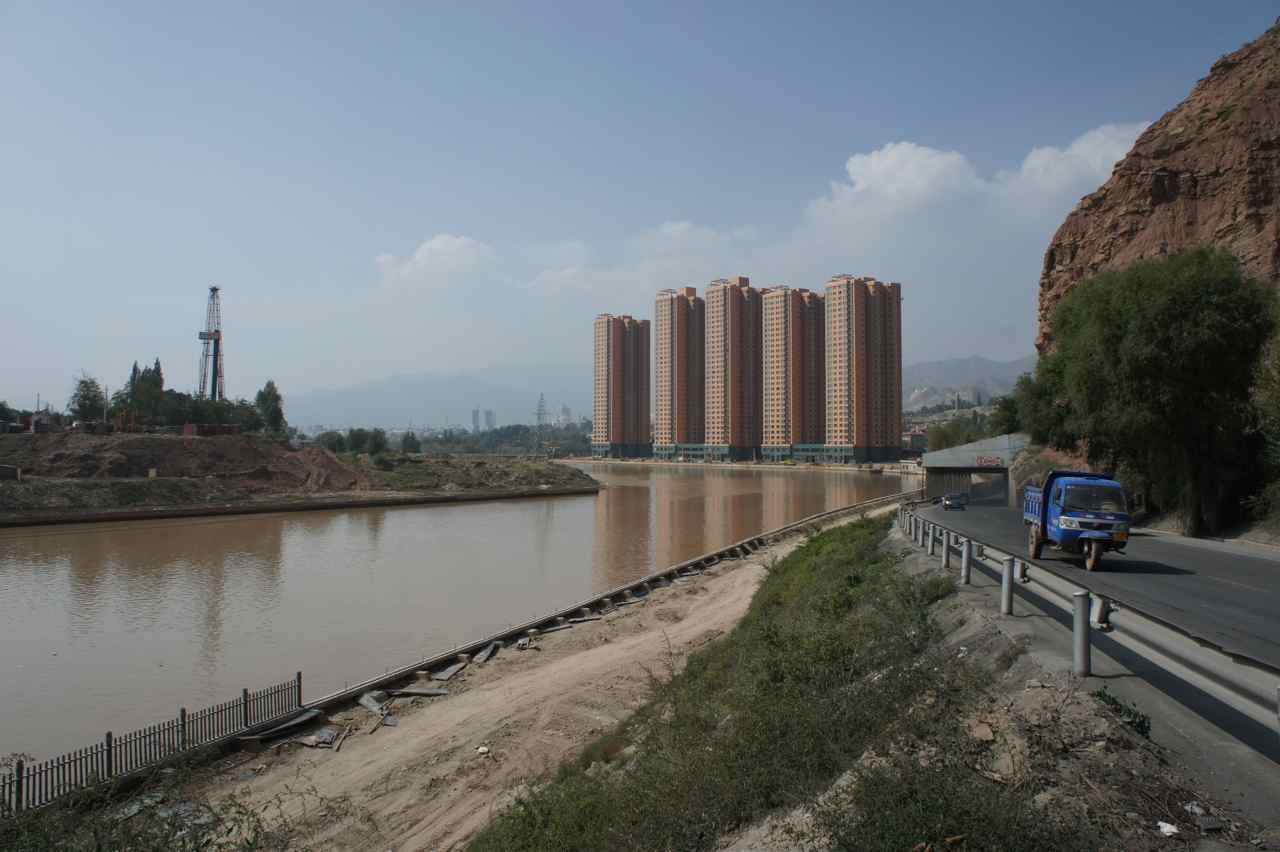 A view of Minhe as we left the city. Almost in every town we pass we can see tall buildings under construction

Our Polish friend started before us and we didn’t expect to catch up with him the same day. Later that day we learned that he had made an navigational error and were 40 km behind us instead of the same distance ahead of us. Taking the wrong turn is never fun and it happens to all touring cyclists. Our most recent experience was when we lost some 50 km due to a wrong turn at an intersection in Uzbekistan.

In the late afternoon we finally reached the banks of the Yellow River. We crossed it twice in two days but the second crossing was on a much more spectacular place than the first one and we count this as our midpoint on our way through China.

For those of you who check our daily map section we have now split the maps in China part 1 and China part 2 because there would be too many maps under one single country. The split was planned to be done when we reached the midpoint, i.e. the Yellow River.

We have now camped three nights in a row. Our first camp site was right outside a sleepy village on the shore of the Yellow River and just at beginning of the first of the two major climbs we were to deal with the coming day.

Finding spots to pitch the tent is still easy and this one was one of the most convenient so far. It was on a little hill behind an abandoned house and although close to the road it wasn’t visable. 100 meter away there was a little stream of clear water that we could use for washing ourselves in. 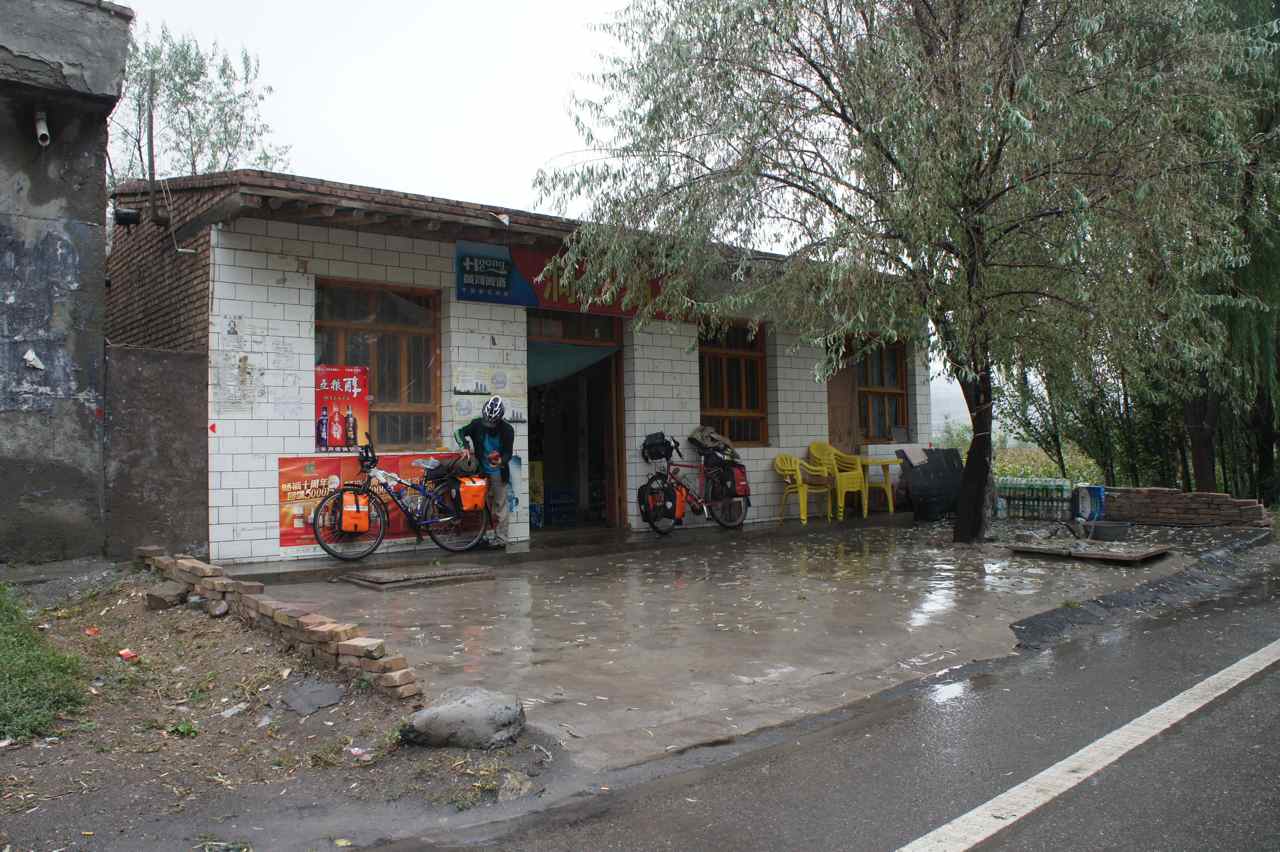 The next morning we woke up to the sound of rain falling on the roof of our tent. It is never fun, especially when you camp on a dirt hill which would be very muddy when it rains. We stayed in bed half an hour extra and when we finally got out the rain had stopped. After having cycled for about 1 km it started again and we did the 10 km climb of 600 meter in heavy rain. Not very fun when we have sent our rain proof jackets to Bangkok…..

At the top of the climb there was a short tunnel and on the far side of the tunnel we found a little shop where we stopped to ask for hot water in which we poured instant coffee. We were soaking wet and didn’t really look forward to the 17 km downhill speed. Wet clothes, cold weather and high speed is a freezing combination. But it was a joy to roll 17 km without having to turn the pedals even once. 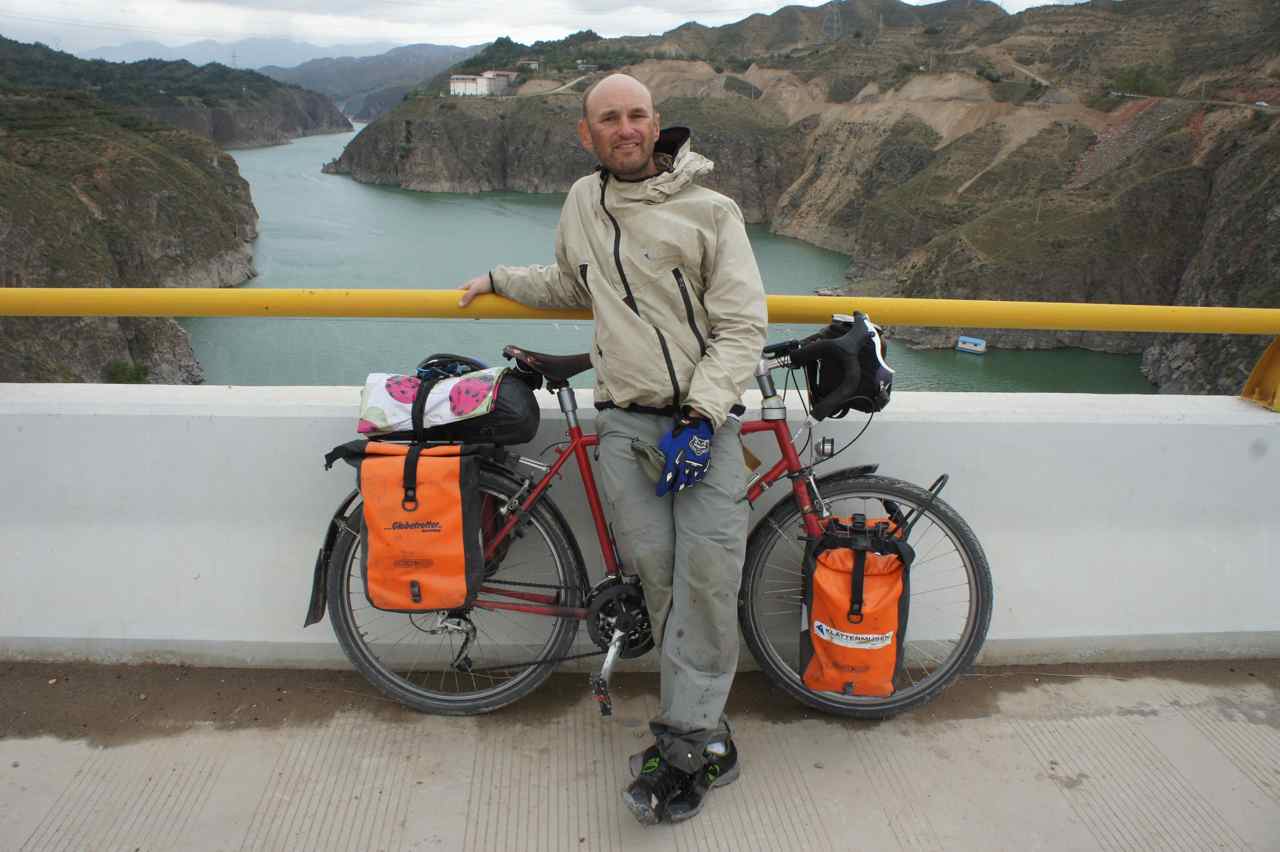 We were now back at the Yellow River and went in to the city of Yongjing to find some warm place where we could eat and dry our clothes. To our great satisfaction the rain stopped while we were having lunch and 7 km beyond the city center we came back to the Yellow River which here had very high banks and the bridge spanning across the river was very high. 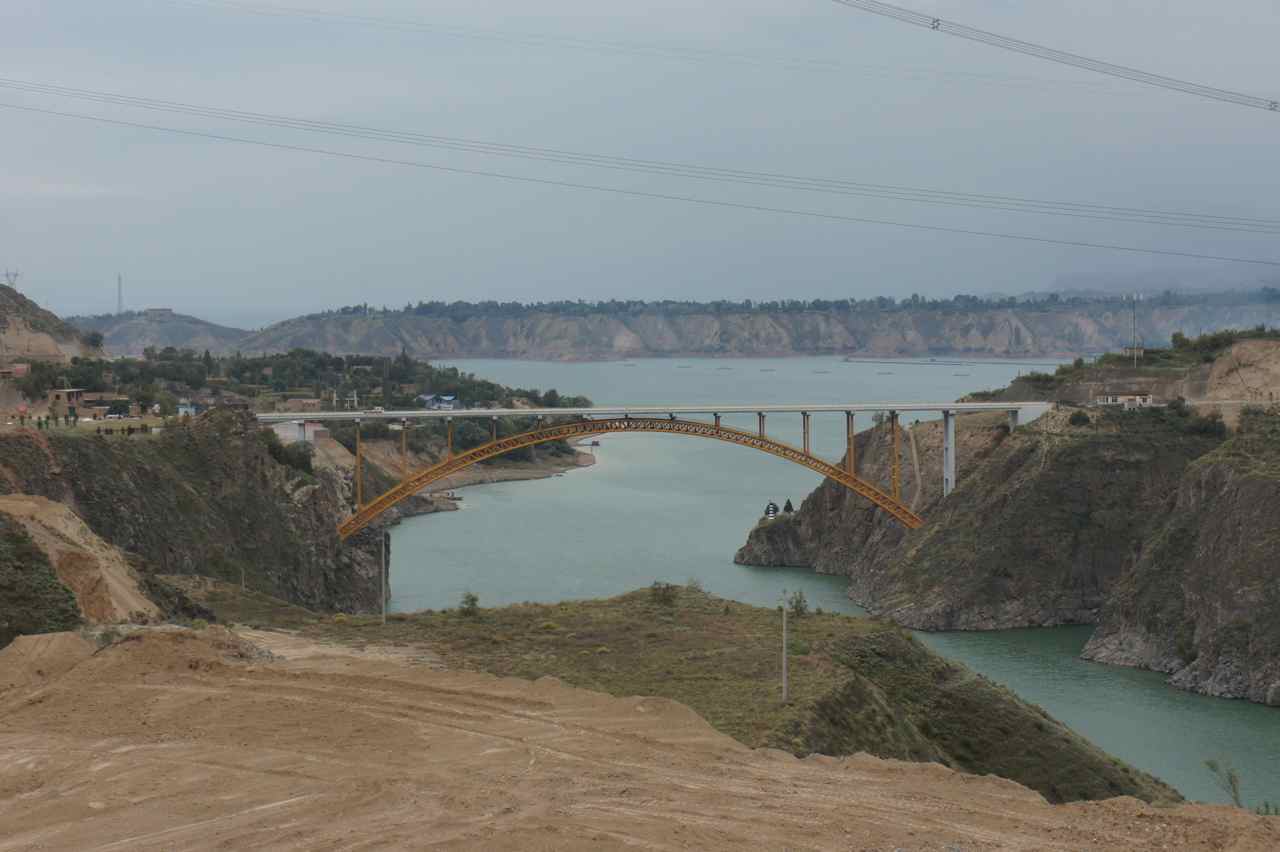 Immediately after crossing the yellow bridge over the Yellow River we started climb number two this day. This climb was a 20 km long and took us up almost 900 meters along the sides of the mountains with an endless number of terraces. It was still cloudy and sometimes a bit foggy and the photos we took didn’t come out very good. 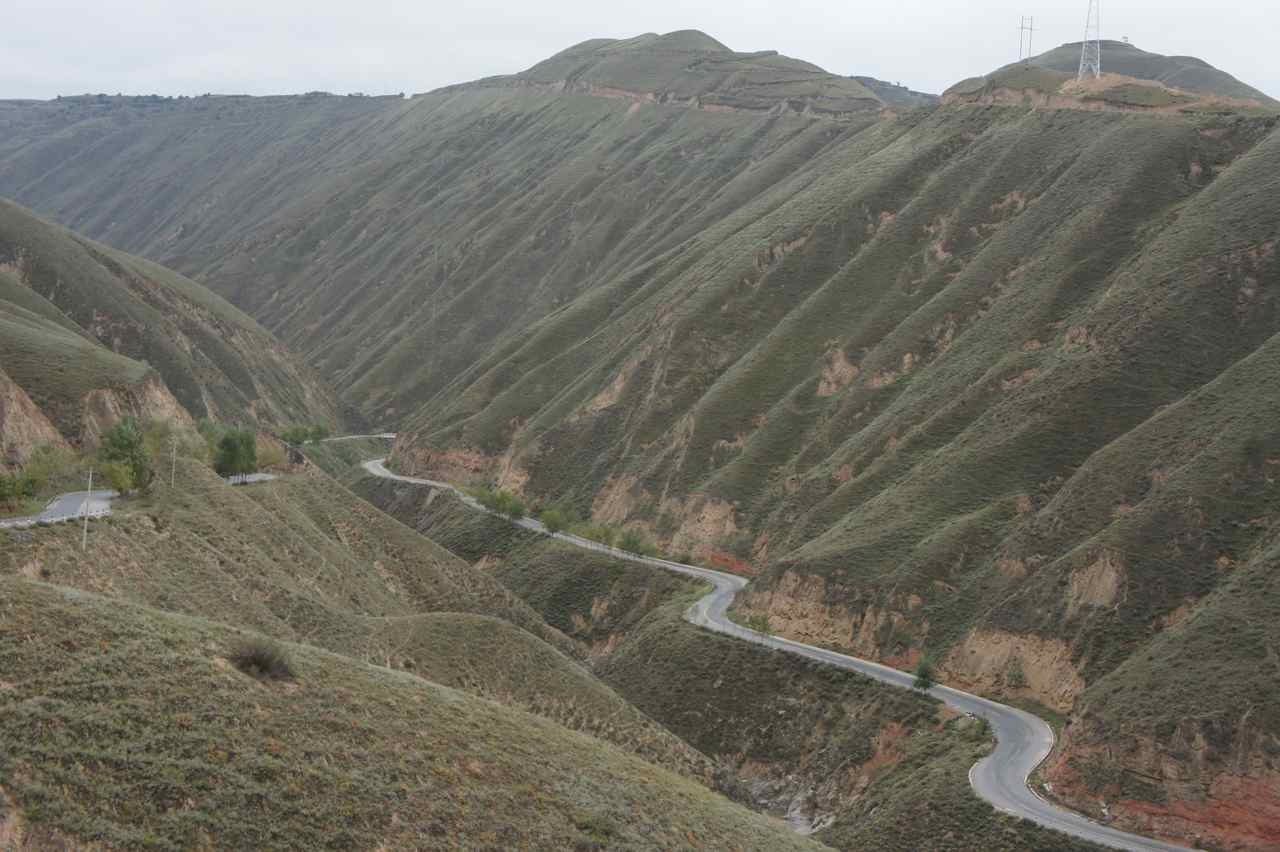 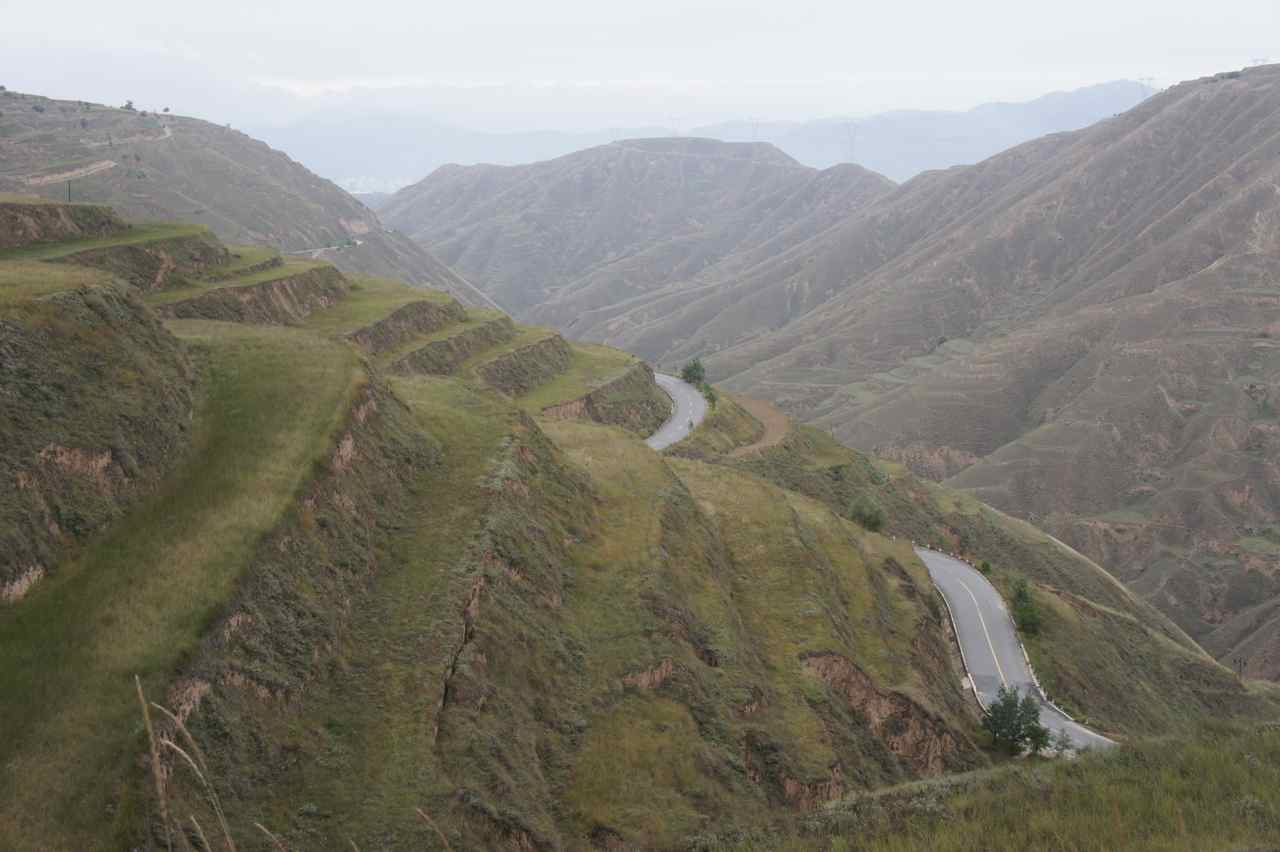 The road follows the terraces 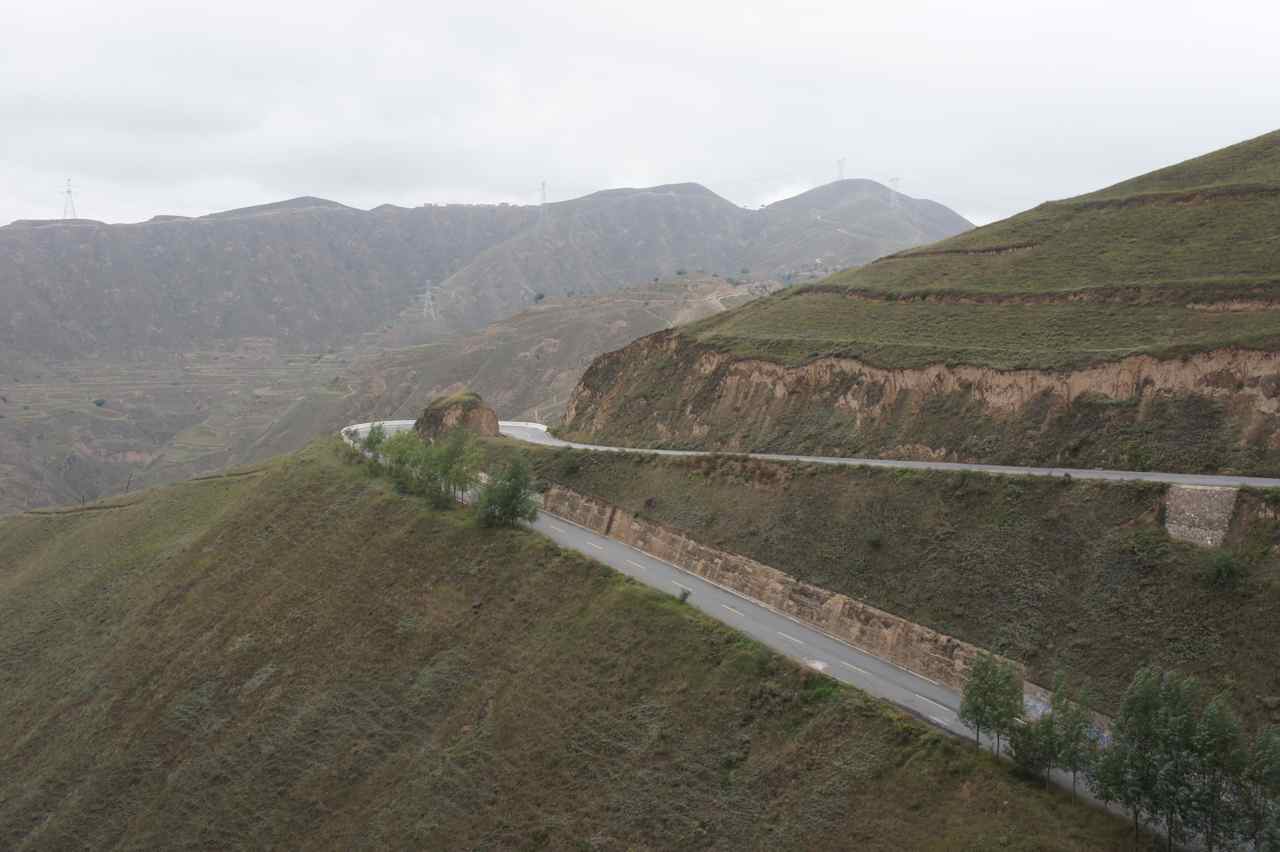 Once we had got up on the mountain we thought it would be a smooth ride, but no….. There were lots of very small climbs and after all previous climbing that day they felt like killer climbs. We actually prefer one very long climb where we can keep our pace for a long time instead of many small ones where it is necessary to change speed, gears, cadence and everything else that breaks the rythm. 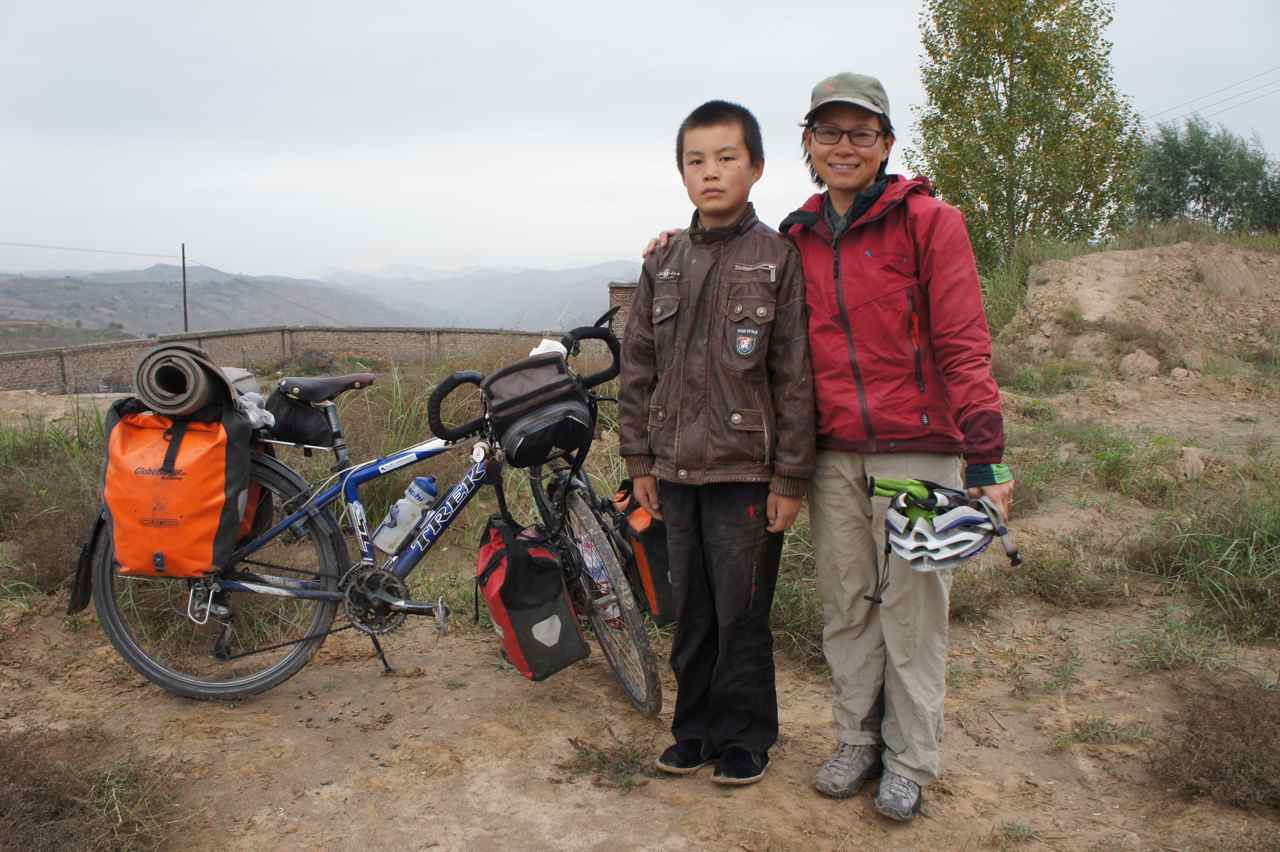 Our aim was to cycle 130 km and reach the town of Linxia, but after having cycled almost 100 km and climbed 1900 meters it finally got dark and we had to find somewhere to camp. This time it turned out to be a flat area just before the last village the start of the descent down to the city. We were close, but riding on those roads in darkness is a bad idea so we had to stop.

The following morning we woke up to the sound of……. raindrops falling on our tent…..
Fortunately it stopped and we could pack our gear and rush the remaning 25 km into town where we bought some ponchos and had a long lunch break. When leaving town we came to a roundabout that was very muddy due to ongoing roadworks. There were lots of traffic and in the midst of all this Wej got a flat tyre on her rear wheel. 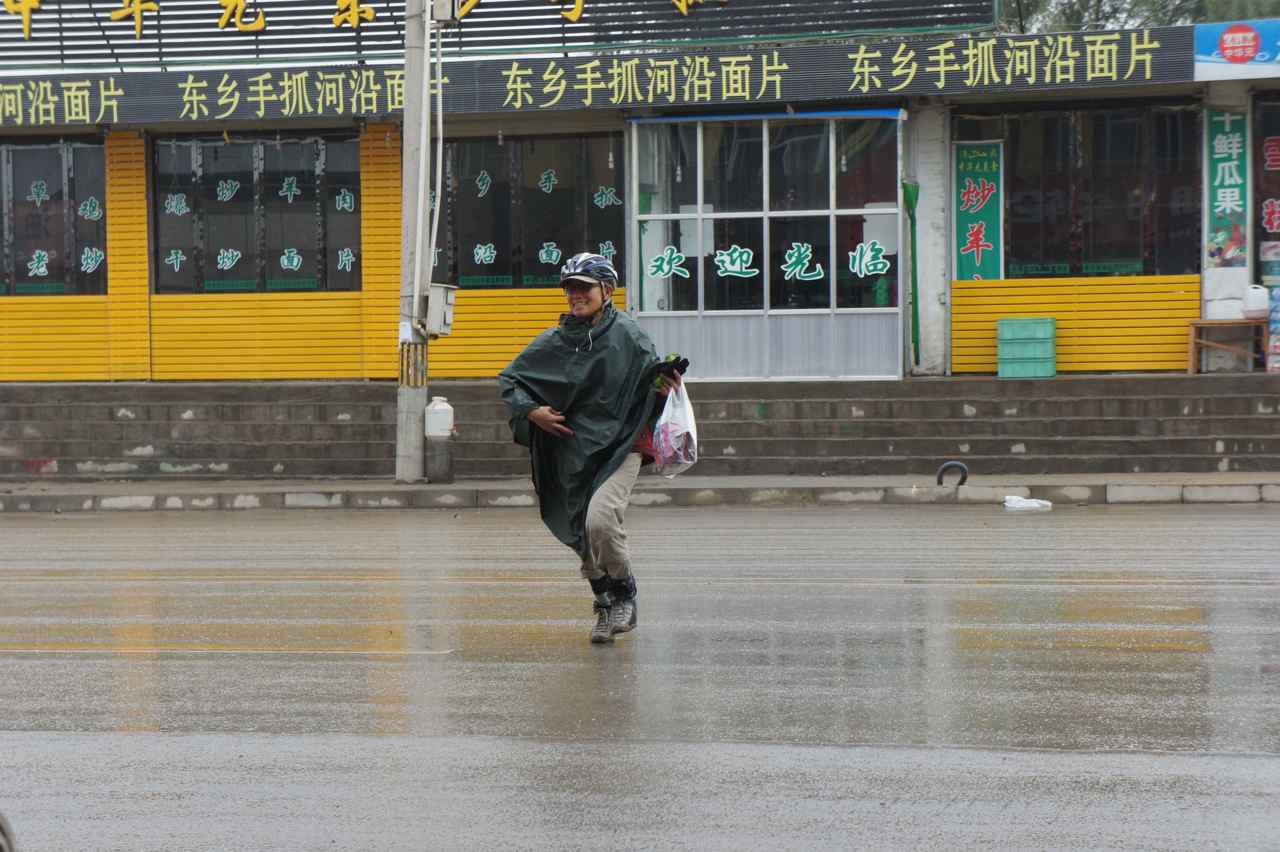 Wej in her brand new 3 € poncho

We had already done 30 km and it was another 100 km and 1200 meters climb to the next city (Gannan) which we knew was too far for us so our intention was to camp. In the middle of nowhere we suddenly found a tourist information office along our way. We stopped and went in and since it was raining again (now we had ponchos so it wasn’t a problem) we asked for nearby hotels. The staff told us there was one 30 km further on and we rushed there only to find it was a simple and dirty guesthouse that was closed. There was nothing to do but to pitch our tent beside the streem a few hundred meters away. 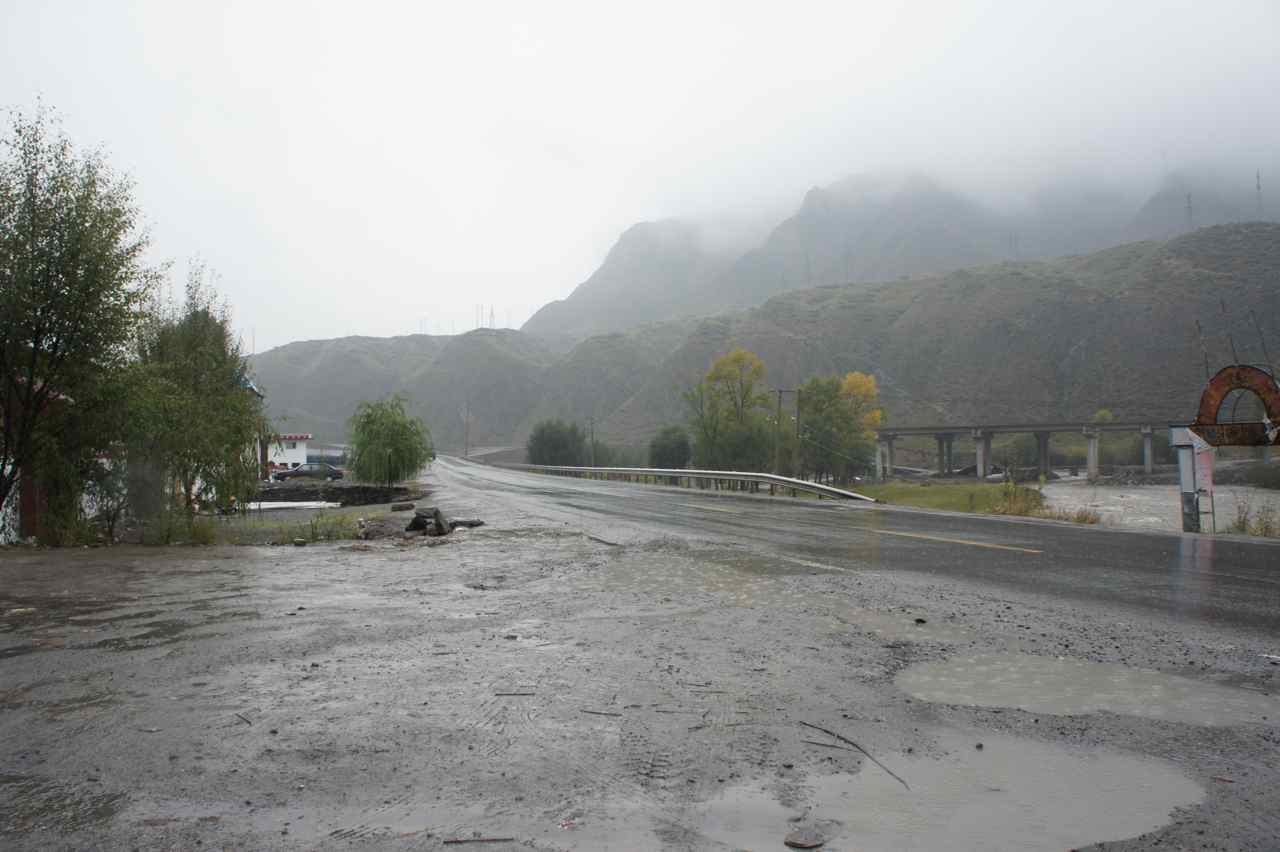 Rainy morning. We came here to enjoy the views and the autumn colours of the mountains but got only rain. Our last campsite was at the green field beside the trees in the centre.

This time it rained when we went to bed and it still rained when we woke up. The surrounding hilltops were completely covered by clouds that poured out its content over us. It was 35 km and 500 meter climb to the town of Gannan where we intended to stay at a hotel, take a half day off and do some laundry and dry our gear. It was raining and uphill but we had a tailwind and our ponchos worked like sails…. About halfway Wej got yet another flat tyre, but this time at a very convenient place right beside a tunnel under the highway that is under construction. We could change to a new innertube without having to get wet. 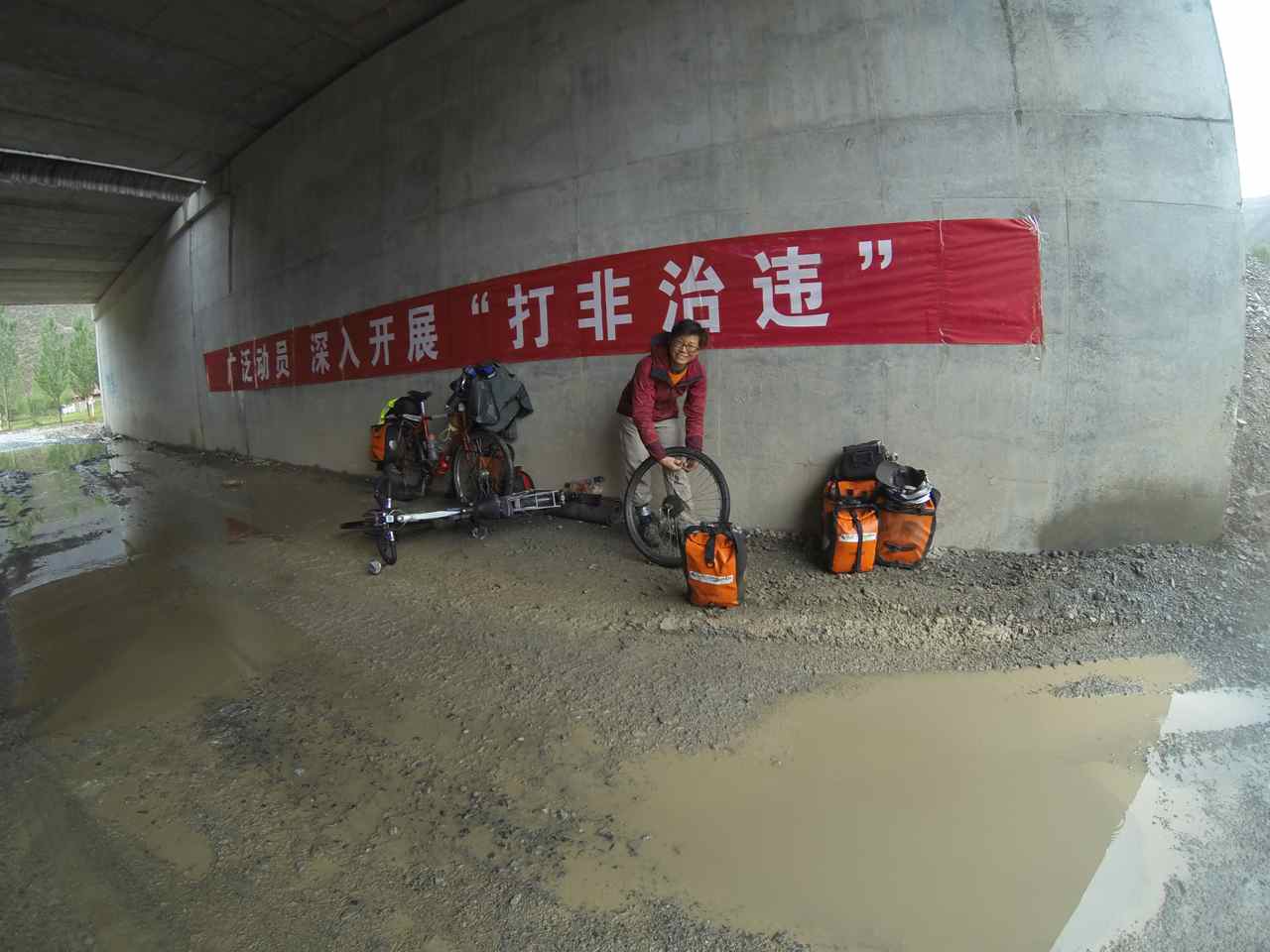 Arriving in Gannan we tried the first hotel we passed by, but it had no license to host foreigners. They informed us about two hotels which have the license, but when we cycled past the first one we saw that it was undergoing a complete renovation and the second hotel turned out to be fully booked. The rain had stopped but after three rainy nights in our tent we were not in the mood for this sort of games and the staff at the fully booked hotel called the police to ask what to do. The police told about a third hotel with license to host foreigners and sent out an officer who was on lunch break to show us the way there.

This afternoon I also got a text message from Fisher, the chinese cyclist we cycled with a few days ago. He sent a message to tell us that there had been an earthquake in Menyuan where we stayed together less than a week ago. It was 5.1 on the Richter scale which is not too strong. Nobody seems to be hurt, but we are glad we weren’t there when it happened.