When we pulled open the curtains in the morning Wej exclaimed ”look at the street, it’s dry”. It stayed dry for the time it took for us to get ready to cycle and about 10 more minutes. At first the rain was not even annoying, but the rain drops got less and less tiny and after a while it was raining heavily. We quickly changed to rain gear.

The terrain around Krakow is hilly to say the least. We went up, down, up, down and up again and soon we were in Wieliczka on the outskirts of Krakow where the salt mines are. My gloves were completely wet and my hands were freezing so we had to find somewhere to rest where we at the same time can keep an eye on the bikes. It happened to be at the local kebab shop.

In the afternoon my gloves got wet again and we wanted to stop somewhere. All of a sudden we passed a parking lot where a guy had a barbecue going and was selling freshly grilled sausages. Without saying a word to each other, we turned around and parked our bikes beside his van. 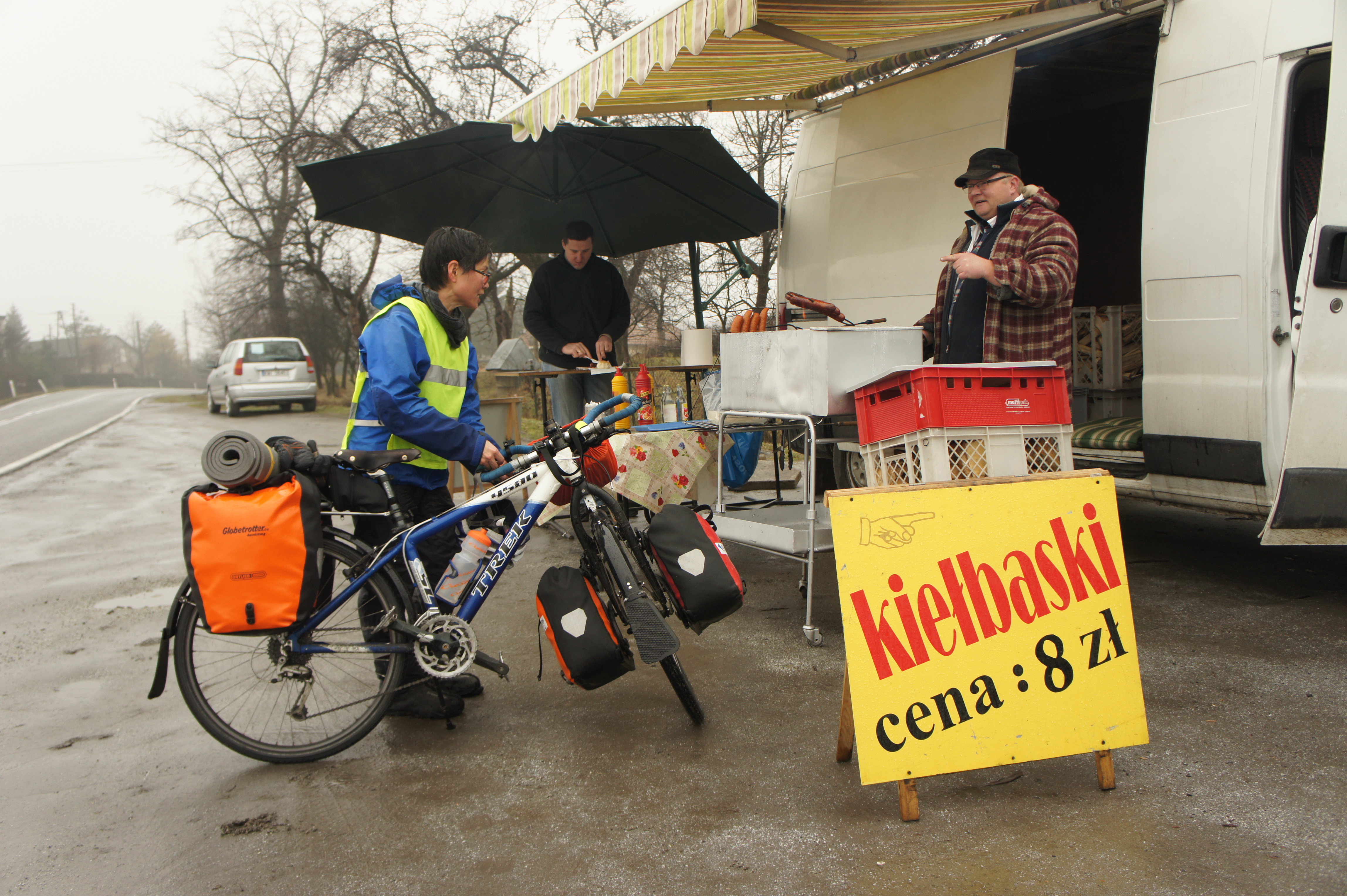 We don’t know the man’s name so let’s just call him the sausage man. He was a very funny and happy guy who knew a bit of German and Russian and since he had had seasonal work in Sweden he also knew a lot of Swedish words too. It is wrong to say we could communicate freely with eachother, but the guy was so joyful and joking all the time and it wasn’t hard to really like his easy going attitude. When I was eating my sausage he was grilling more sausages speaking to himself in Polish, when he suddenly shouted:

Anyone who grew up in the late 70:s and watched the Muppet Show would immediately have made the same association as I did. The Swedish Chef exists for real and sells grilled sausages at parking lot on a countryside road in southern Poland….. 🙂 🙂 🙂

We had a great time with the Sausage Man when another customer came by. It was a young lady and when she ordered her sausage I understood that the Sausage Man told her that we were riding our bikes from Sweden to Bangkok. She then turned to us and asked in perfect English where we were going to stay tonight. Since we had given up the plan to reach Nowy Sacz we said Limanova and she replied that it was her home town. She presented herself as Lidia and soon we were invited to stay at her house. Lidia had to go back to work first and we agreed that we would call her once we got the town. 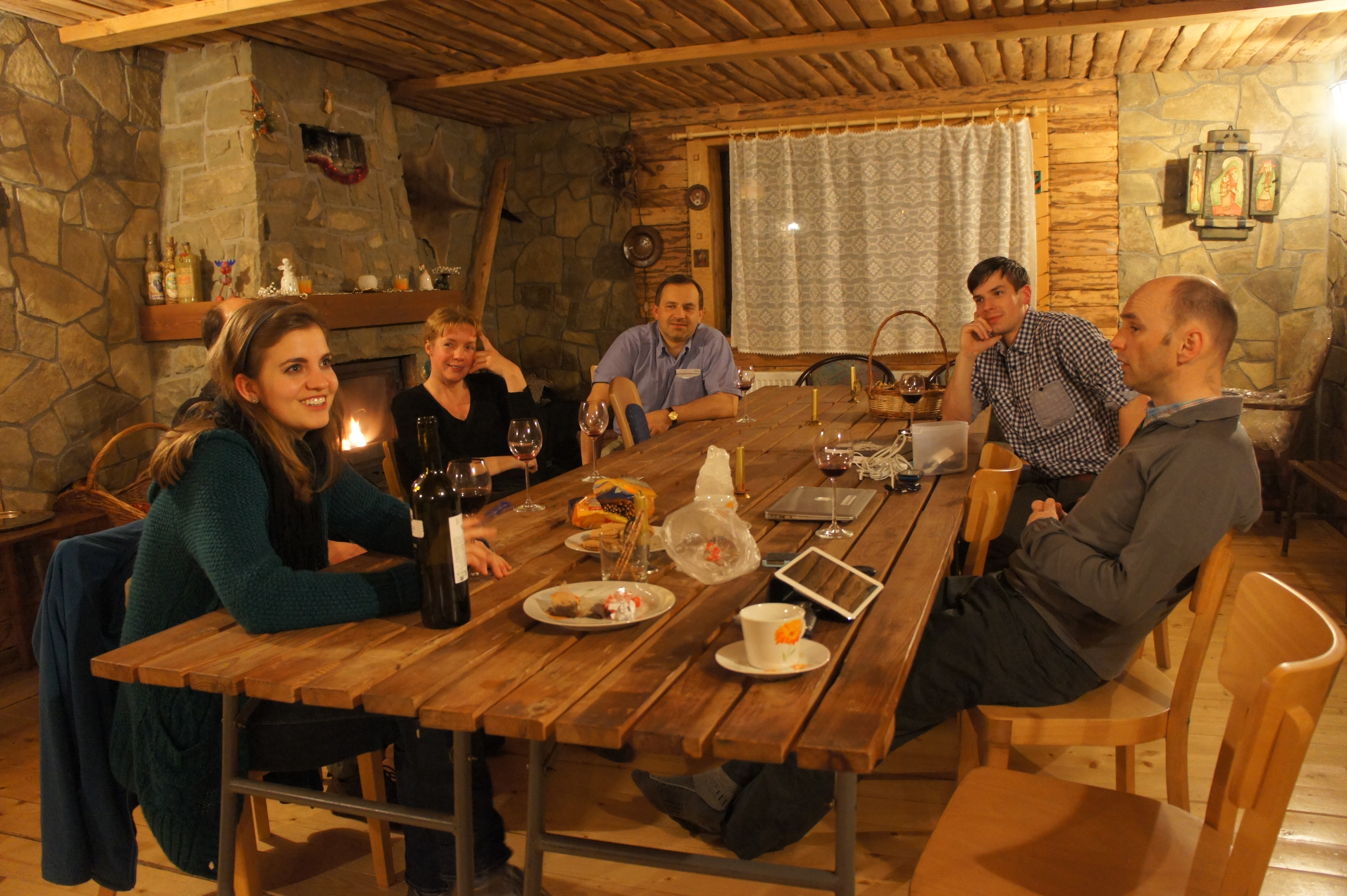 The road to Limanova had a giant climb and when riding up it started to snow. It was a pity because I believe it would have been a very beautiful landscape with rolling hills and great views. Now we couldn’t see further than 300 meters.

Lidia and her husband Benedykt are really sporty people. They do rock climbing and have a climbing wall on their house. They go kayaking and Benedykt is definately more crazy about cycling than we are. In the evening Lidia’s parents and another friend came by and we shared a bottle of wine while discussing adventures. Lidia’s father appeared to be an experienced mountaineer who has climbed big peaks in the Himalayas so there were plenty of topics to discuss. 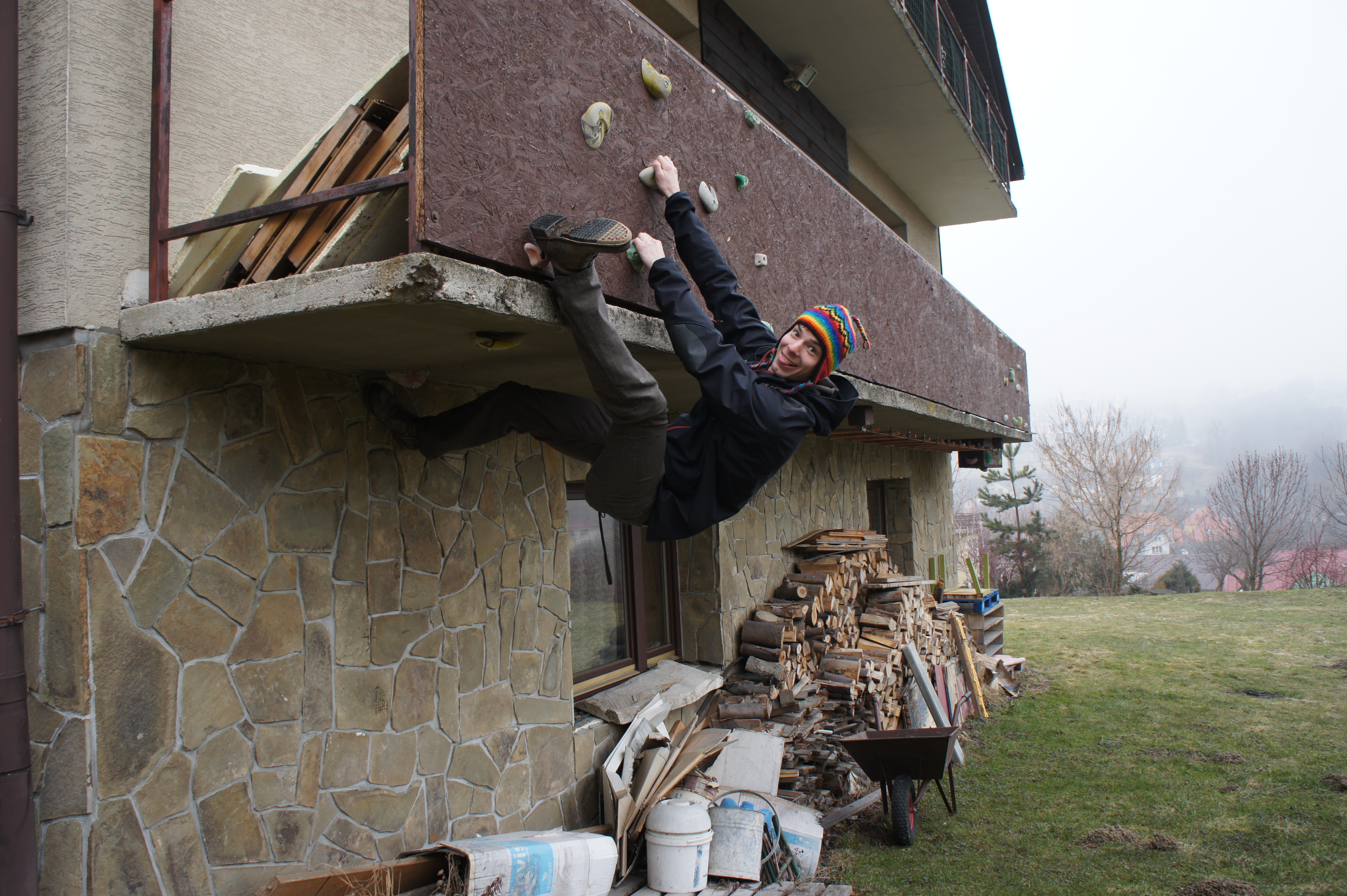 Benedykt on their private climbing wall 🙂

It once again strikes me how fortunate we are to meet all these nice people. Apart from being openminded ourselves, the key to all the interesting meetings is that we travel slowly on our bicycles. If we came by car, people would probably not have been as interested in us and we would have missed many opportunities to get to know the locals, which after all is the purpose of this journey. Sightseeing is fun but can basically be done from the computer at home. What counts is the meetings, or as Benedykt said tonight.

”You can take a photo of a nice sight, but never of our conversation.”

So thank you Sausage Man for the good sausages and giving us some good laughters and thank you Lidia and Benedykt and your parents for inviting us to your lovely house. When visiting Sweden you now where you need to go, and there are even places to rock climb around Göteborg 🙂 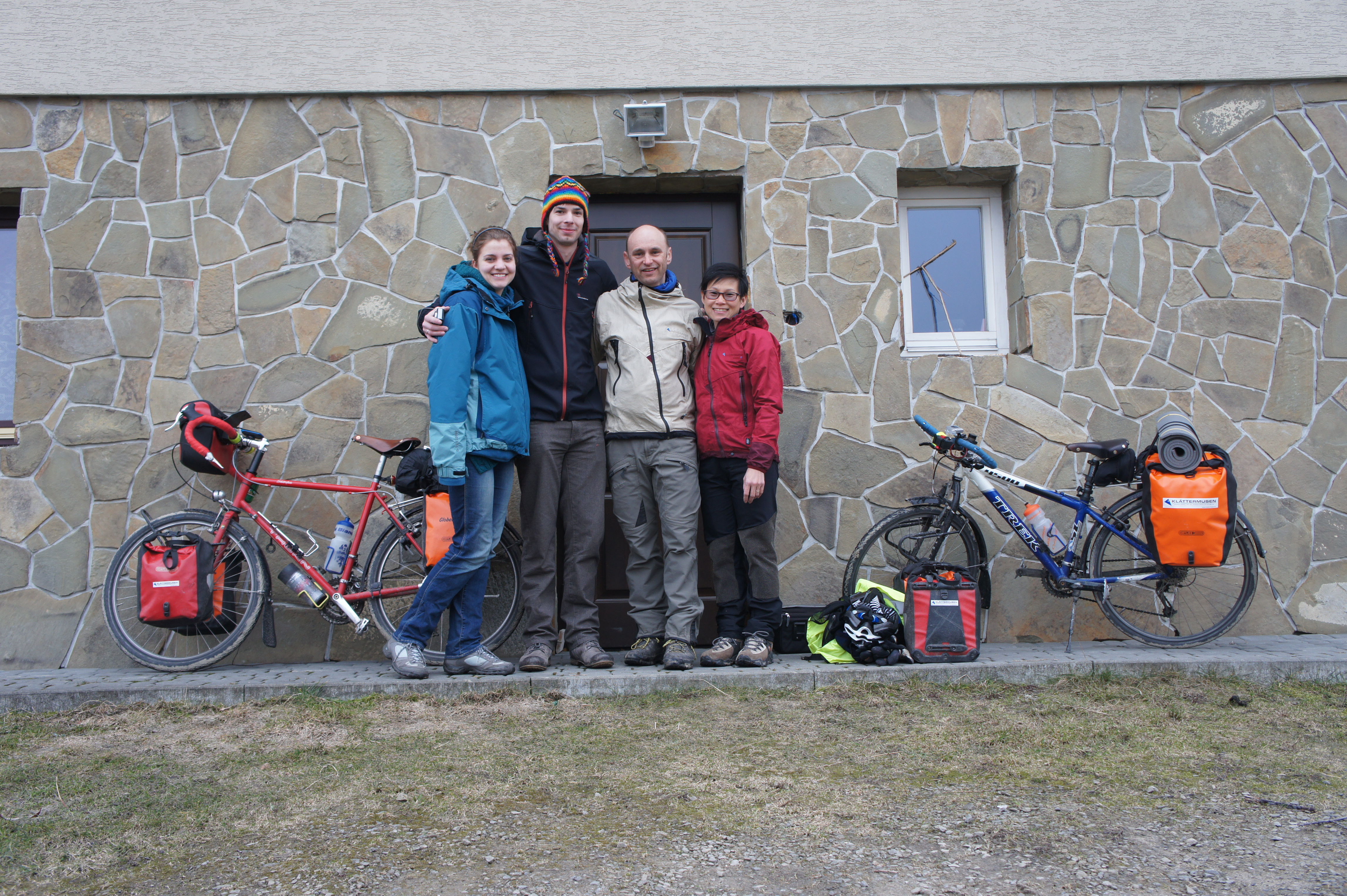