When we woke up we found the tent very moisty inside. This tent is a Hilleberg Rogen which is a light weight 3-season tent that Hilleberg released only last spring. Hilleberg is known to make top notch state of the art tents and the Hilleberg Nammatj we have before is designed for expeditions in extreme conditions and I am sure the Apollo project would have used Hilleberg tents had there only been air and rain on the moon…..

Our old tent is a bit large and heavy for this trip that will take us mainly through warm areas and when Hilleberg last year finally went into the market for 3-season tents we decided to buy this one and save 2 kg of weight. However, these 2 kg of weight saving has come with a price, ventilation is not as good, the fabric and poles are not as strong and there are fewer storm strings.

We have only used this tent for 3 nights before so we knew that ventilation was not as good as the old tent, but it can easily be solved by opening the zipper in the door some 20 cm in the top end. Unfortunately we forgot this and had to use our towel to wipe the tent dry inside.

After packing our gear we went to the nearest town to find something to eat for breakfast. We stopped at the main square and I went into a small shop and used my limitied russian vocabulary to ask one of the shop keepers for yoghurt, bread, cheese, sausage and coffee. The 60+ lady smiled and ran around in the shop to pick all things I wanted. When she saw Wej moving our bikes outside she asked if we were cycling and I told her we were on the way to Istanbul. Her immediate reply was ”big muscles….” 🙂

We sat down at a few benches outside the shop to have our breakfast when the lady came out to us. This time she was accompanied by a young man who spoke very good English. Finally she could interview us about our trip and she also gave us a bag of candy and a box of something called ”Turkish delights”, which was some super sweet yelly candy that went perfect with the coffee.

Soon we started to ride again and we went into the beuatiful city of Veliko Tarnovo. It is situated on slooping hills and when approaching it from below one can see a mountain covered by houses in many colours facing the sun. The town seems to be a tourist attraction and we went in to the centre to have something to eat, check our mails and update this blog (we write blog texts in the tent). Pizza seemed to be the cheapest food and we ordered a set with pizza and coke each. Being used to pizzas of smaller size we were surprised that the pizza was so big. We couldn’t eat it all and asked for a doggy bag, which turned out to be a pizza carton box. We strapped it to Wejs bike and started got about 50 meters when I found that my rear brakes were not behaving properly 🙁

I stopped and inspected it and the brake pad on the right hand side were gone…… !!!
Last time I changed it was at a gas station somewhere in central Romania and it was -5 degrees and snowing heavily. I remember my hands were so cold that I couldn’t fit the little lock pin that will keep the pad from falling out if I would ever roll backwards and brake at the sme time. When braking and rolling forward it is no problem. Apparently I have been rolling backwards and braking during our ride up to the city centre – the problem is just that I can’t remember it happening and I should, because I am very bad at cycling backwards….

We quickly changed my brakes by mounting a new pair of brake pads and started to roll down the steep road from the city centre when it happened.

I got my first flat tyre on this tour. I had started to believe we would make it to Istanbul without flats. Of course it was on the back wheel and for the second time in 15 minutes we had to stop and get all our tools and spares out to change my innertube.

When going south from Veliko Tarnova one has to cross a mountain range (Stara Planina). There is one major road across it and some smaller side roads. We stopped and discussed which way to go and since there was very little traffic we took the main road.

We discussed the reasons why there was so little traffic. After a while Wej said:

– “Maybe there are so few trucks because it is Saturday.”

Of course this was the reason and it proved to me that we have finally got away from being caught in the week circle of working Monday-Friday. We have lost count of what day it is and my new year pledge for this year was ”no Monday mornings in 2013”. I seem to have come a far way to reaching that goal. 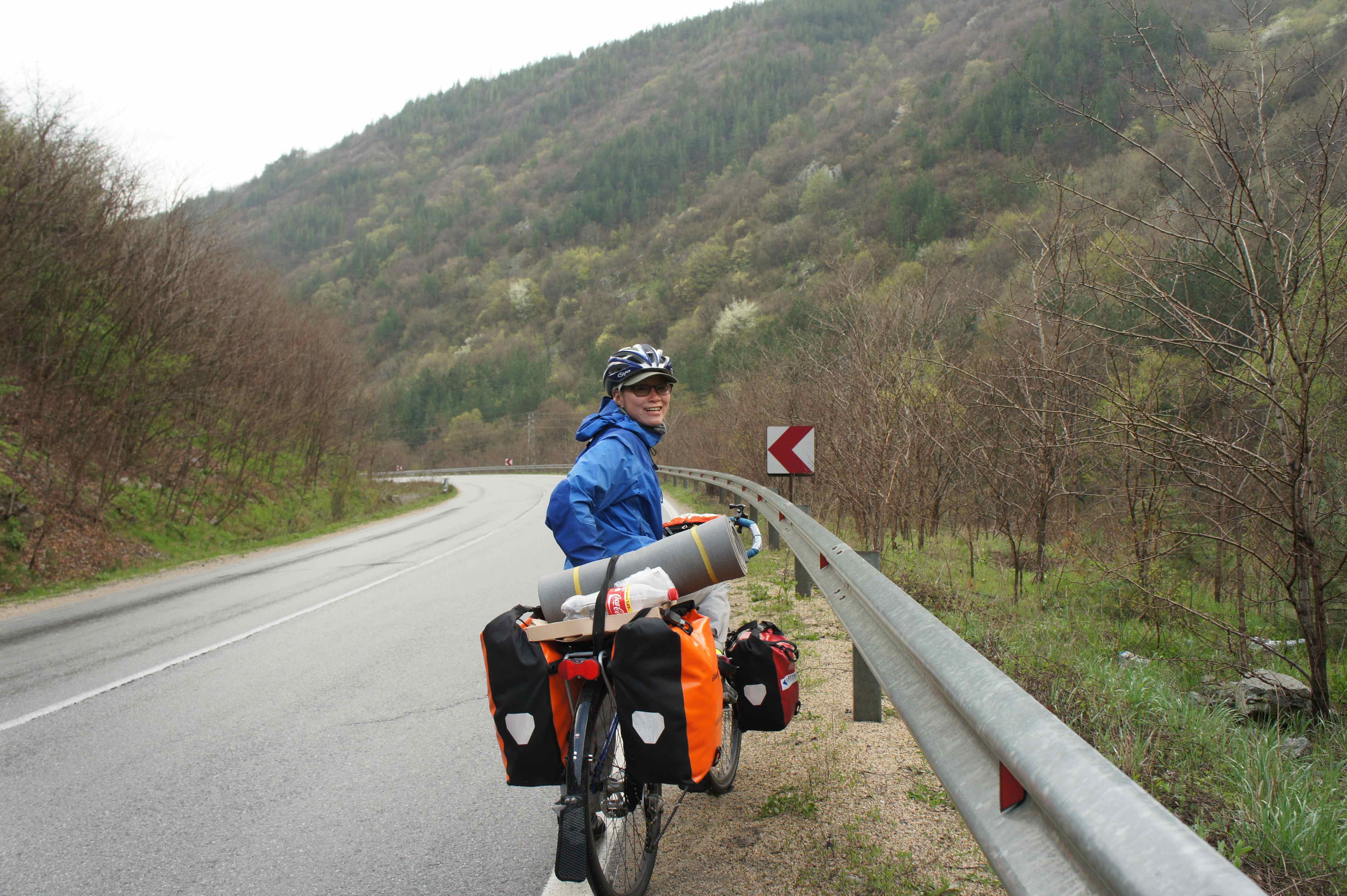 Wej on the way down from the pass.

The climb up the mountain range was acutally not so bad, at least until we were on the final climb to the pass which was a climb of 350-400 vertical meters and just below the top it started to rain. Even if it was a light rain we stopped and put on our rain jackets. When we reached the top there were two small restaurants. We needed to fill our water bottles and we went in to one of them. When we sat down the rain started to pour down, just like a monsoon shower. Lucky us to be inside because it wouldn’t have been fun to be outside fighting the hill when that shower started.

The ride down from the pass was wonderful. We didn’t need to pedal for many kilometers. The first town after the mountain ridge is Gurkova. When riding into the town we found a sign telling ”Motel, Restaurant, TIR-parking, 900 m”. We wanted to sleep inside this nigh but couldn’t find the motel. After asking three persons including a police officer, they all said there was no motel in town. We went to the TIR-parking (overnight parking for truck drivers) and there were no rooms there either. Then we went to the restaurant across the street and the owner said we should go to the motel in the centre!! We said we know there is no such motel. He then checked with his staff who confirmed this. The man told us to wait and went in to his restaurant to check with more people. When he came back he told us there is a hotel in a nearby village and made a map for us.

It was getting dark and we cycled the 4 km to the village as fast as we could. When in the village it seemed very small and we saw no sign of any hotel. Wej went in to a cafe to ask and they said there was no hotel in the village. It had never been and will never be, the village is too small….

It was now almost completely dark and since we suspected there might not be any hotel after all we had memorized a few good tent spots on the way in to that village. We hurried back to one of them and started to put up our tent.

We saw flashes on the sky and but the thunder seemed to be far away. It started to rain lightly and blowing. We got up our tent in good order and had just sat down inside when the thunder storm hit us. The thunder was not close (about 2 km by the time difference between flash and sound), but the wind was seriously strong and the rain was heavy. I went out to try to secure the tent better, but once again I ran into the problems of a 3-season tent. If we had used our old tent instead we would have been sitting inside reading a book while letting the wind and the rain pass. Now we were sitting on one side each with rain jackets and pants on prepared to run out to fix things.

The wind pulled out the tent pegs from the ground and I had to go out to put them back a couple of times. We sat like this for about two hours and then it was good to have our remaing pizza slices in a doggy bag 🙂

Finally it stopped to rain, but the wind was still strong and we woke up a couple of times by the wind pressing the entire tent down to our faces. A bit scary, but now we know a bit more about our new tents abilities…