It was a wonderful morning and it was going to be a wonderful day too. We left the guesthouse at 8.30 and slowly navigated out of town. We wanted to avoid the big highway and our map told us that if we went through something that appeared to be a residential area, we would both make a shortcut and avoid the big road. At an intersection we met a bunch of older guys who were chatting to each other beside an old car. They asked where we were going and when we told them the name of the village, they used sign language to indicate that we couldnt’t go that way. The language barrier made it difficult to understand why until one of them said:

This mix of Russian and German was enough for us to understand that there was some problems with the road. We have ridden on many ”daroga kaputt” before and after our experience in Tajikistan a few years ago we are still waiting to see the ”daroga” that really is too ”kaputt” to ride on. 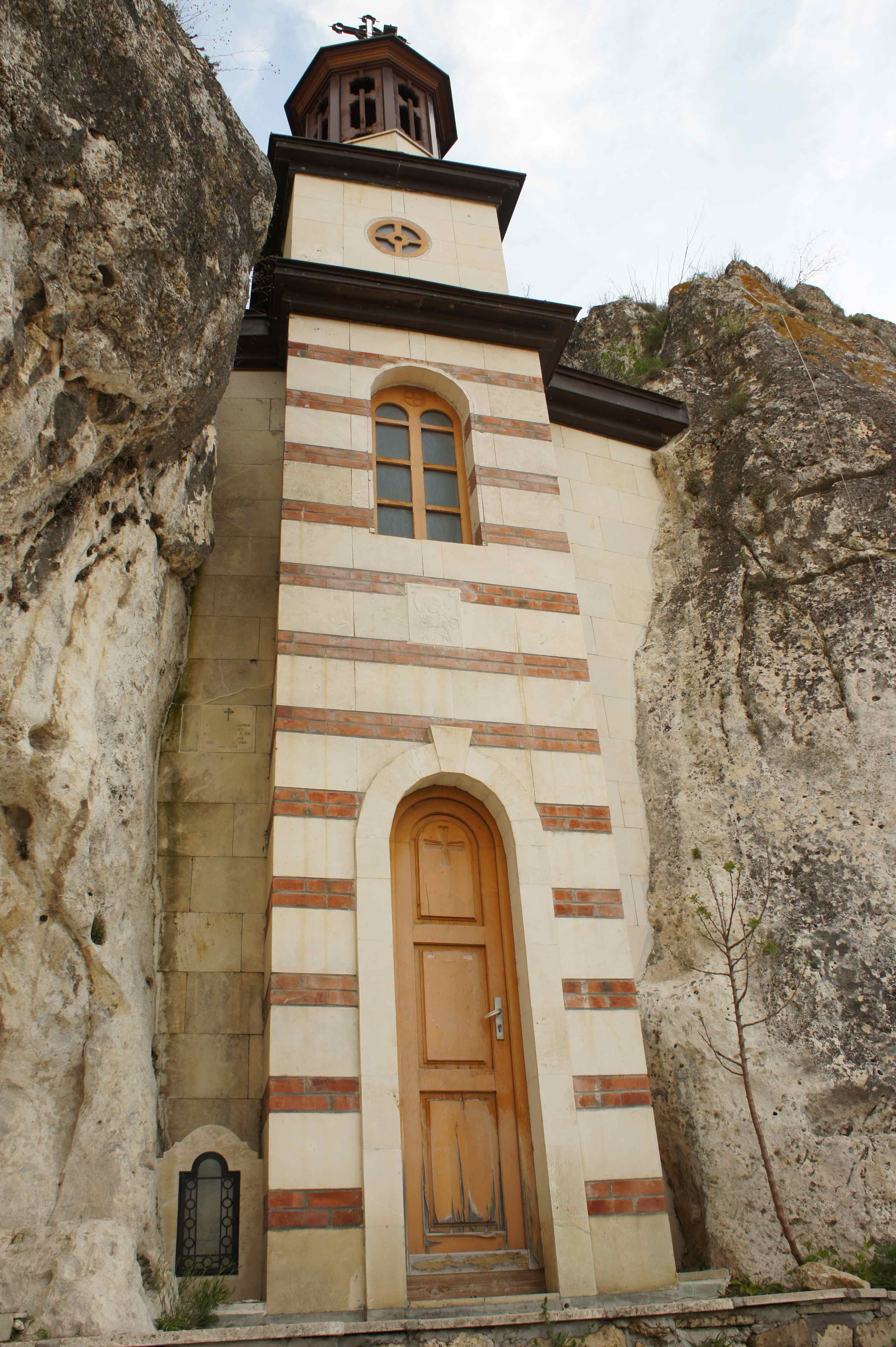 Church carved into the cliffs

The men pointed at the big highway and tried to indicate that we should go there instead. We were not interested in that and tried to look like we didn’t understand. Then one of them jumped in to an old Lada car and pointed that we should cycle behind him. Game over, the ”daroga kaputt” won this time and we rode out behind the old man in his car. He drove slowly in front of us for about 2,5 km, made a turn to a smaller road, stopped and pointed to show the direction to the village we had told him we were going too.

It is amazing how nice and helpful people are and we felt a bit ashame for pretending not to understand the guys. They just wanted to help us and the couldn’t possibly know that our definition of ”daroga kaputt” is different from many others’.

The mission for the morning was to visit one of the many sites just south of town the guy at the tourist information had recommended. They all seemed to be interesting but we had to choose one of them and we picked the monastery carved into the side of a big cliff. Narrow steps were cut out from the rock and we climbed up to admire the various chambers and the impressive view of the neighbourhood. 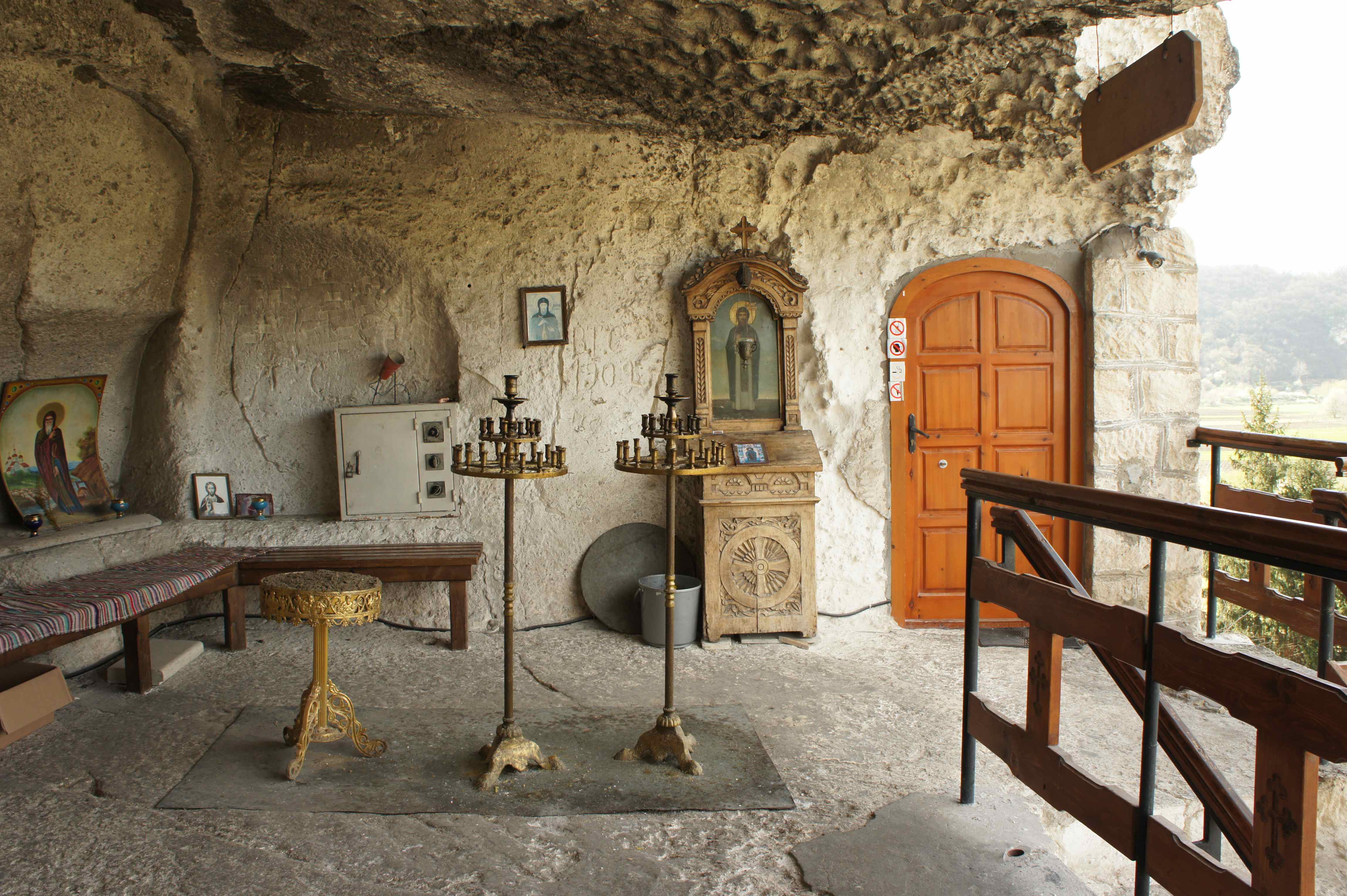 Prayer chamber carved into the rock at the monastery

After visiting the monastery we continued along the small backroad. Not many cars passed us and for once we could enjoy the pleasure of cycling beside each other and talking about things without having to shout. Flowers were blossoming along the road and birds sang in the trees. Could it be any better?

People are busy working on the fields, sometimes in large groups and sometimes alone. At one occasion we saw a horse carriage parked at the roadside but it seemed to be empty. When we got closer we saw a head of a man in the carriage and when we passed he raised and we saw that he was holding a water bottle in one hand and a small vodka bottle in the other. He then raised the vodka bottle in a way that couldn’t be misinterpreted. He simply said ”cheers” to us.

A short while later we noticed that he had turned his carriage around and made his way in the same direction as we were going. We normally ride faster than horse carriages but this time it was upphill and we were slow. The man and his horse approached quickly and soon we could here the sounds of the horse which was galloping at full speed. The guy overtook us with a big smile, waved and left us behind. At the top of the little hill he let his horse walk down, but once we closed in on him and were in position to overtake him he made his horse run at full speed again. This happened a few times before he stopped at the road side and let us pass.

We felt pity for the poor horse and we still wonder if it drunk driving with your horse carriage is a legal offense in Bulgaria.

Some time before lunch it happened….. It got too warm and I had to stop and put on my shorts. When fighting the snowstorms and icy roads 2-3 weeks ago I was dreaming of this moment when I would start cycling wearing only shorts and T-shirt. Now that time has come and we really hope this weather will stay a long time. We have got our fair share of poor weather so we think we are worth some nice cycling weather now.

Not only the weather was good today. We managed to stay away from the big roads and instead the road we travelled on got smaller and smaller and sometimes it took an hour between the cars we met.

We had no definate goal for today. We knew Velik Tarnova would be 130 km from Ruse and after spending time on the sidetrip to the monastery we knew we could make it there but it would be a bit tough in the end. We then decided to prepare for camping and we went in to a small grocery store to buy some food that we could cook. 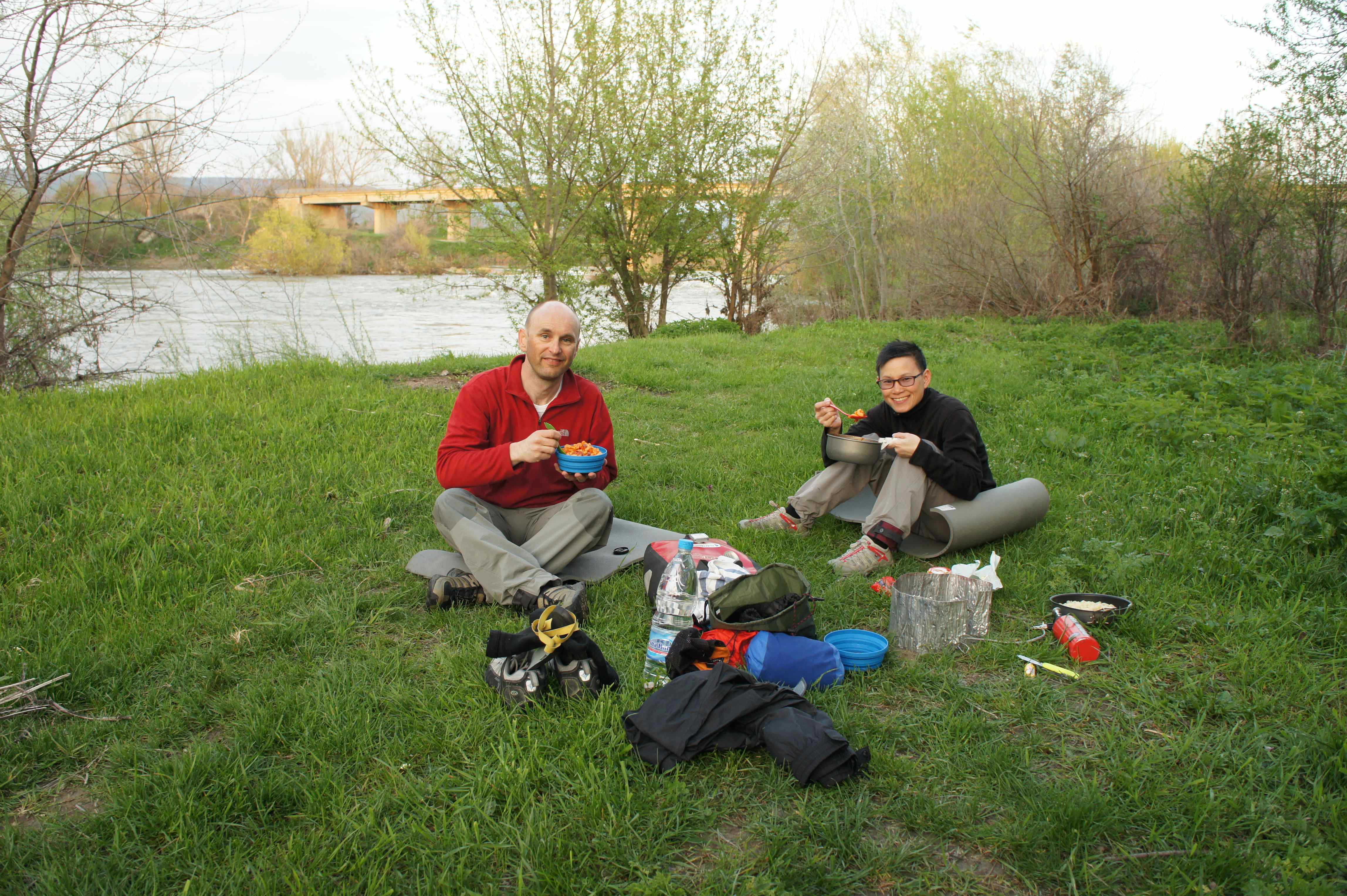 Camp site 1 on this trip

Only two kilometers beyond the village were we shopped spagetti, tomato sauce and some sausage we found the ideal tent spot. It is along a river with nice flat areas and lots of trees and bushes on its banks. A perfect location, and even better is that a couple of hundred meters away there is a place where there is natural running water and people come to fill big flasks of water. Perfect place for doing the dishes,

We are experienced campers since long ago, but this is the first night on this trip. Although we had gone through our luggage about 10 times before departing were anyway a bit anxious that we had forgotten something. And we sure had….. We had not forgotten the tent or the sleeping bags, but something that is almost as important.

We had forgotten our foldable coffee mugs.

If anyone is going to Istanbul within a few days or knows anyone who is going there, then please send two plastic foldable coffee cups to us….. You will be rewarded with a postcard and eternal gratitude 🙂