Taking week long breaks upset our morning routines. After our brief visit to Sweden it took us a few days to get them back. Our week in Istanbul had the same effect. When we left the city we intentionally started to cycle at 2 PM to avoid the morning rush hours and we slept so long that we almost missed the hotel’s breakfast times.

Yesterday we planned to camp but ended up in a guesthouse because of the late start from Istanbul and late arrival to the town of Sile. This late arrival once again meant late bedtime followed by a late wake up.

We used our camping stove to boil some eggs in our room bring along and have as us lunch together with sandwiches. The guesthouse was located in a small square in Sile and had a partial view of the Black Sea that looked very blue this morning. 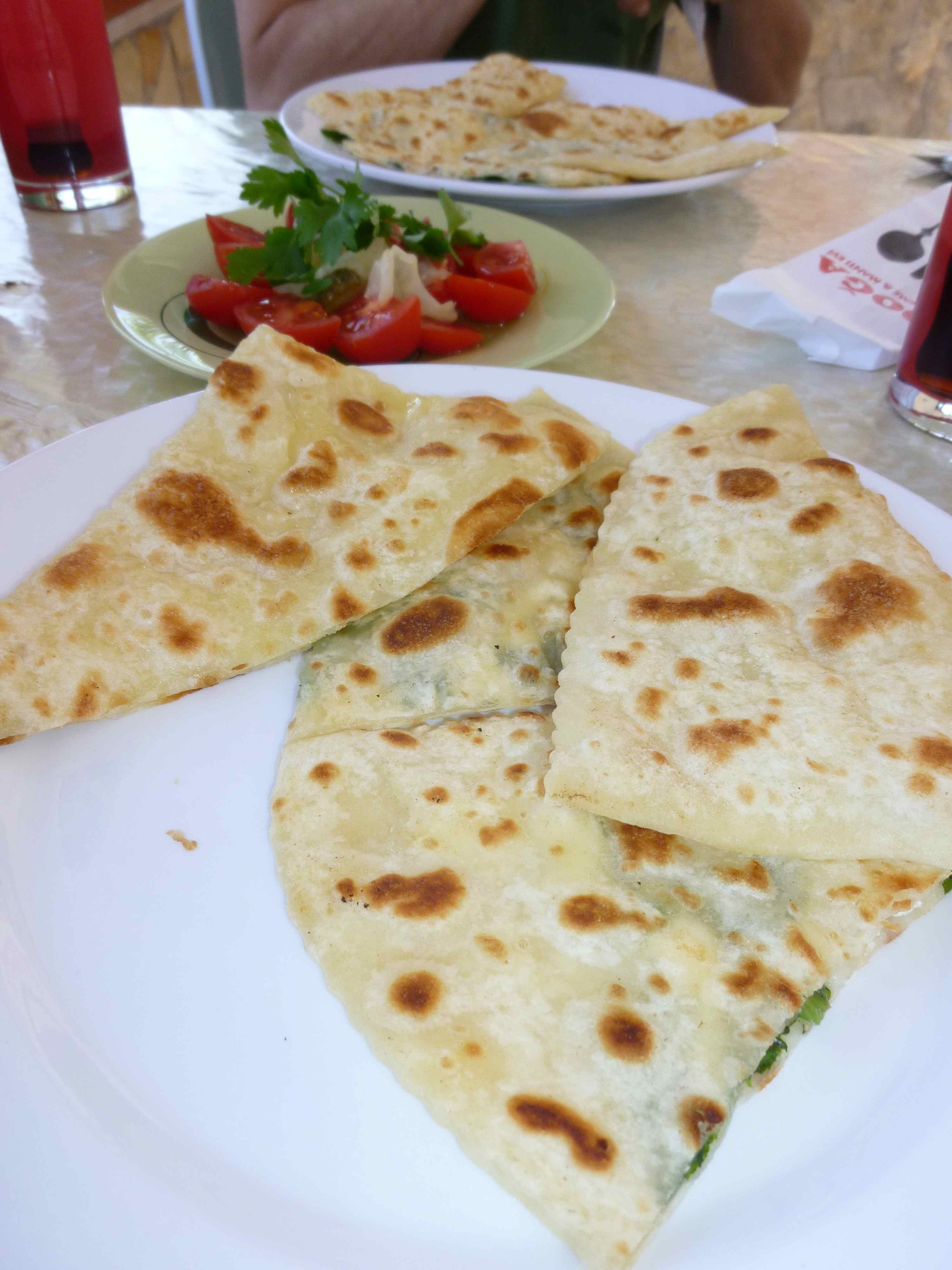 After only 7 km we got hungry and decided to keep our eggs and sandwiches for dinner instead and stopped for lunch at a small restaurant in the next village. We had ”Gözleme” which is a flat bread wrapped around cheese or meat and then fried. Very tasty indeed.

The first big upphill section started not long after our lunch break. The road took us up and down between 50 and 200 meters altitude. It also had lots of sharp turns and resembled a giant rollercoaster. It was a bit hard to ride but the surroundings were so beautiful that we didn’t think much of tough it was. 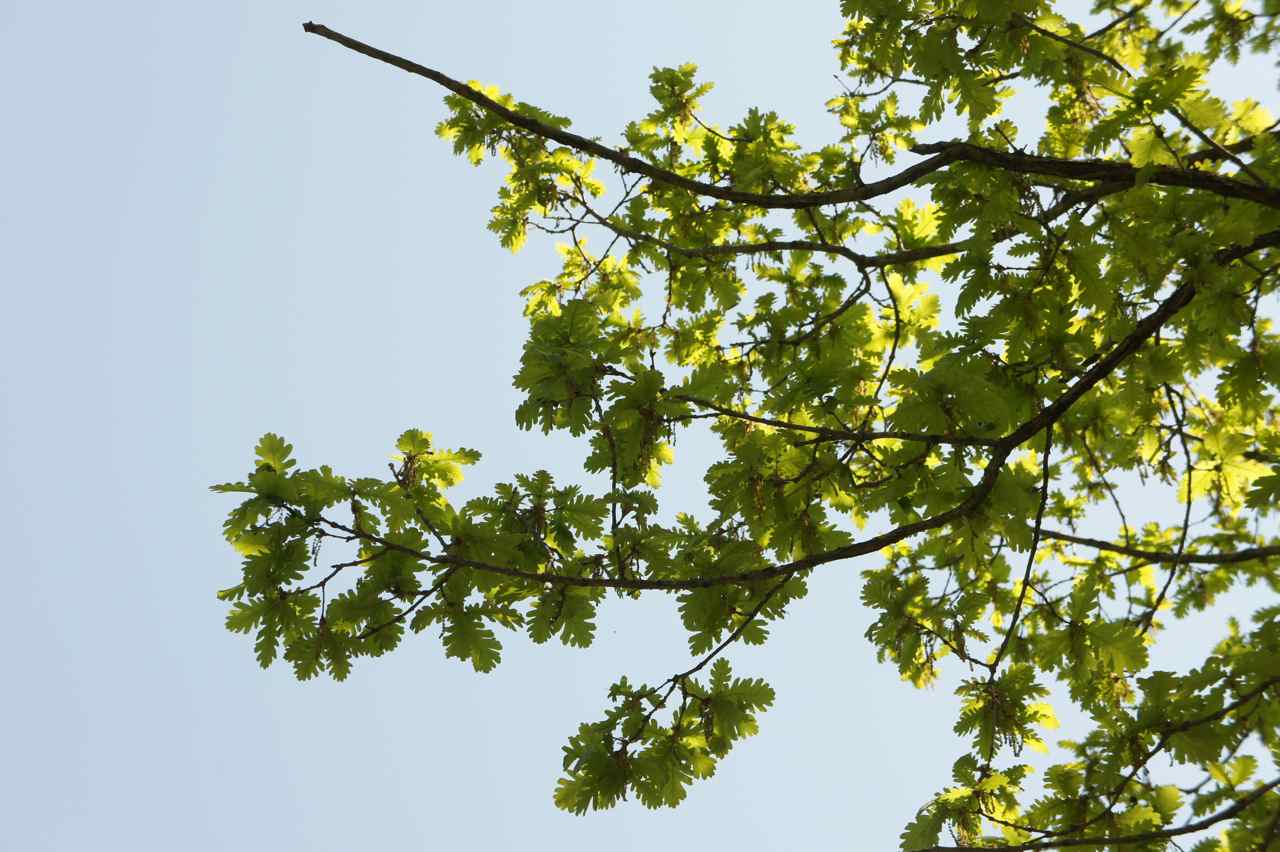 We had been told that this part of Turkey is very green and indeed it was. After we left the farmed areas and entered into the forest we felt like being somewhere else. The lush forest still had a light green nuance that certainly will be dark green in a few days. At some sections of the road oak trees dominated the forest and with all yellow and white flowers on the ground it looked quite a bit like southern Sweden during the peak of the summer.In other parts of this beautiful road pine trees dominated and we got a feeling of being high up on the mountains of northern Thailand.

We saw a lot of cattle along this way. Sometimes the walked around freely and ran into the forest when we cycled by. Other times they had bells and grazed the grassed fields. Their ringing bells that told their owners were they were a nice contrast to the sounds of the Harley Davidson motorbikes that went past us at regular times. This road seem to be good for not only cycling but also riding motorcycles. 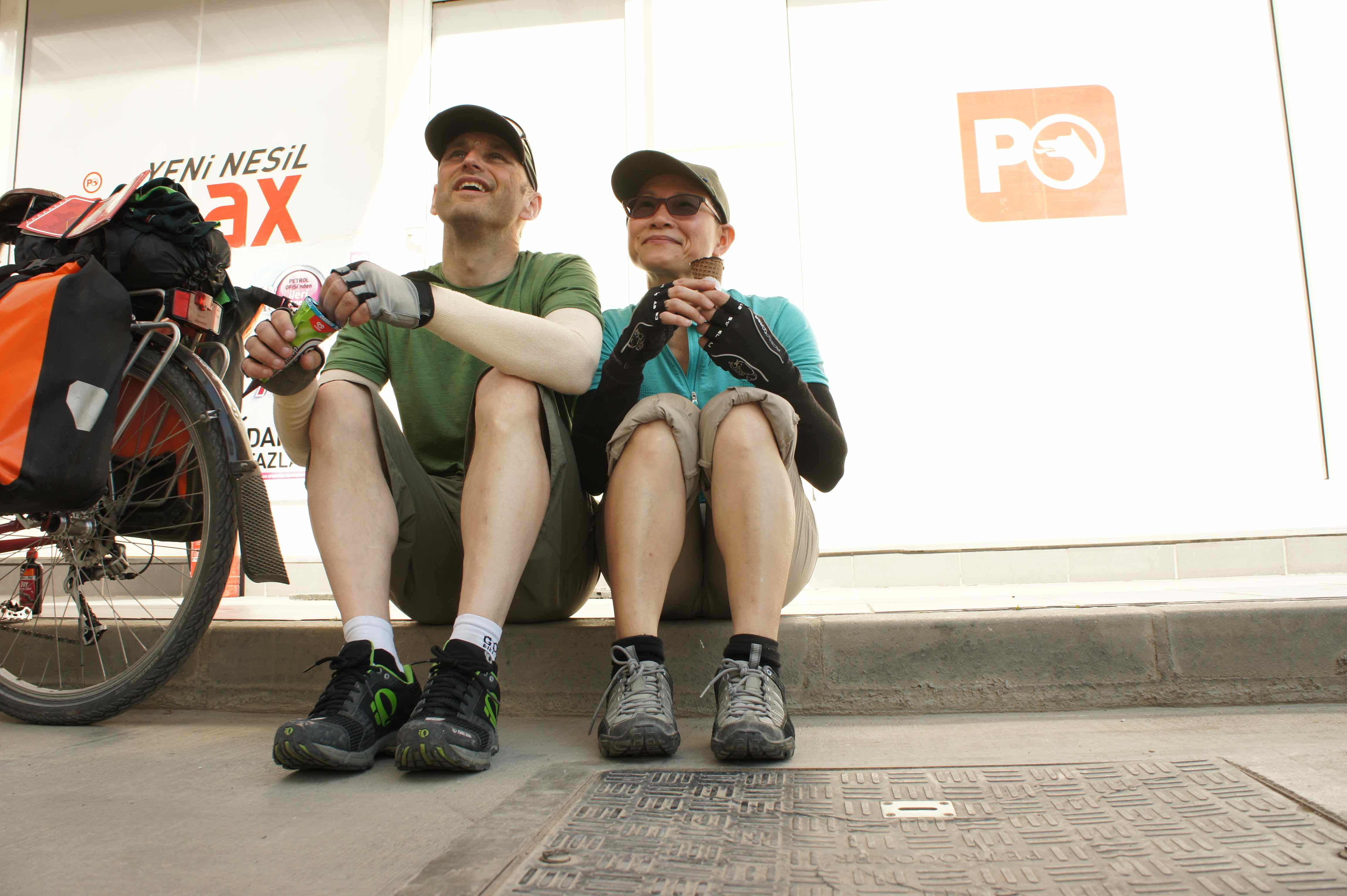 Icecream break at a gas station

We really loved the 20-25 km of cycling through the forest between the town of Sile and Teke village and we hope we will see a lot of similar landscapes further on.

We decided to quit cycling early today in order to be able to go to bed early and get back into normal morning routines. In the next town (Agva) we stopped at a gas station to go to the bathroom and while there we met two guys on motorcycles who we had tea with and talked to for more than an hour. One of them worked in the medical industry and had lived i Copenhagen for half a year. In Agva we bought some fresh vegetables to have with the spagetti dinner we intended to cook. 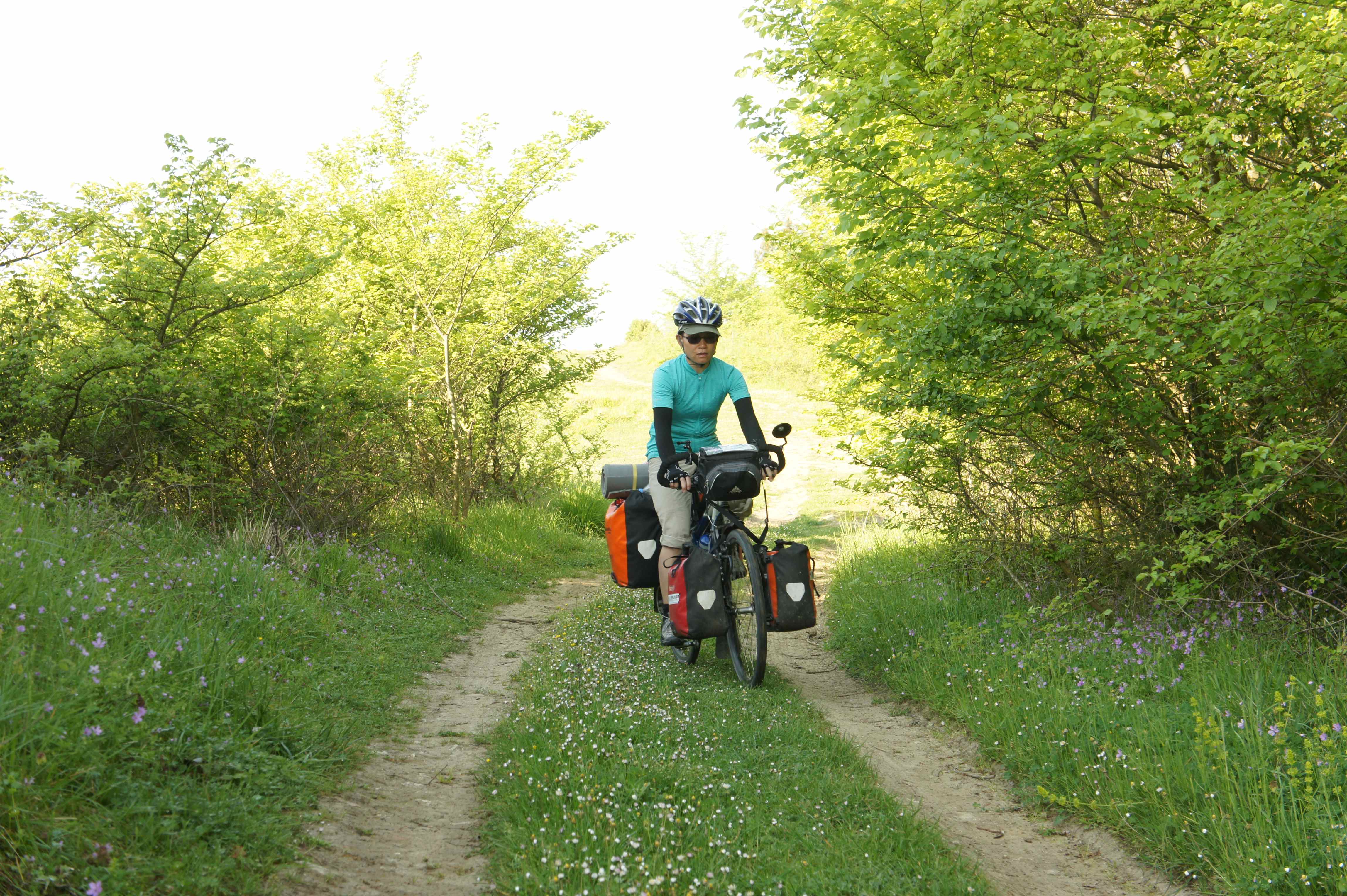 There are a few villages just outside Agva and after the last one on a hilltop we found the perfect spot to pitch our tent. The villages was within sight and after dinner when working with tent a flock of some 20 storks flew past our hill at low altitude. They are magnificent when they come sailing towards you at low speed and land on the tree tops below the hill. We don’t know much about storks, but maybe the trees on this hill was their bedroom. They took a few more flights around the hill in the sunset before they finally settled for the night. I have never seen so many storks flying at the same time and never so close. It seemed like they were playing around before going to bed and we really enjoyed watching them from a close distance. 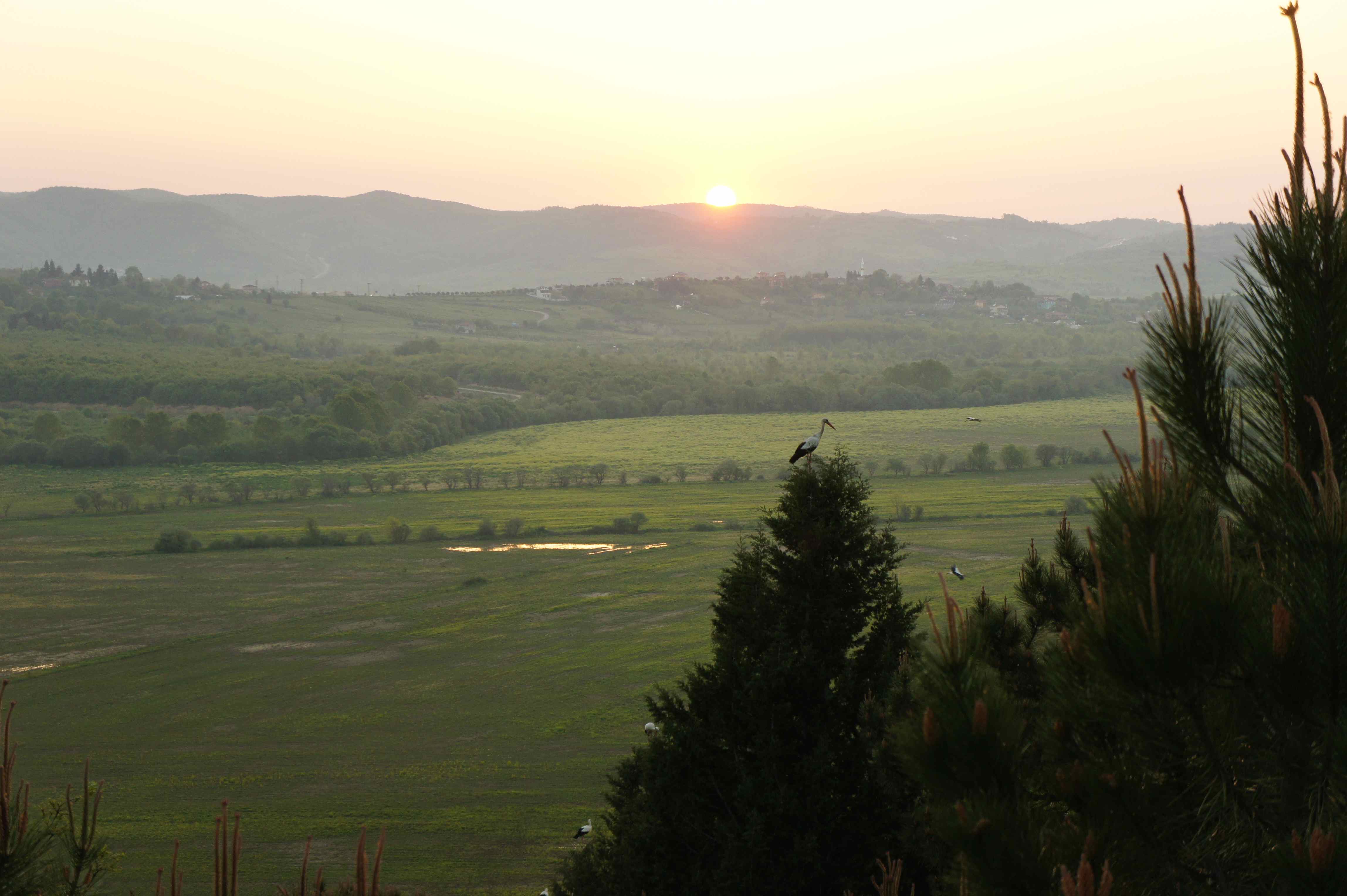 Sunset and storks (look closely at the tree top and around)

I am writing this in the tent and as mentioned there are a couple of villages not far from this hill. Late in the evening and with only a few seconds time difference we heard the calls for prayer from the mosques in the surrounding villages. I have lived in an area of Bangkok where a lot of people from Thailand’s deep south live and I then got used to hearing calls for prayer from mosques, but even in that area the Buddhists were still the majority. Being in a country where Islam is the major religion and calls for prayer can be heard from various directions even when staying in a tent on a hilltop is truly exotic. 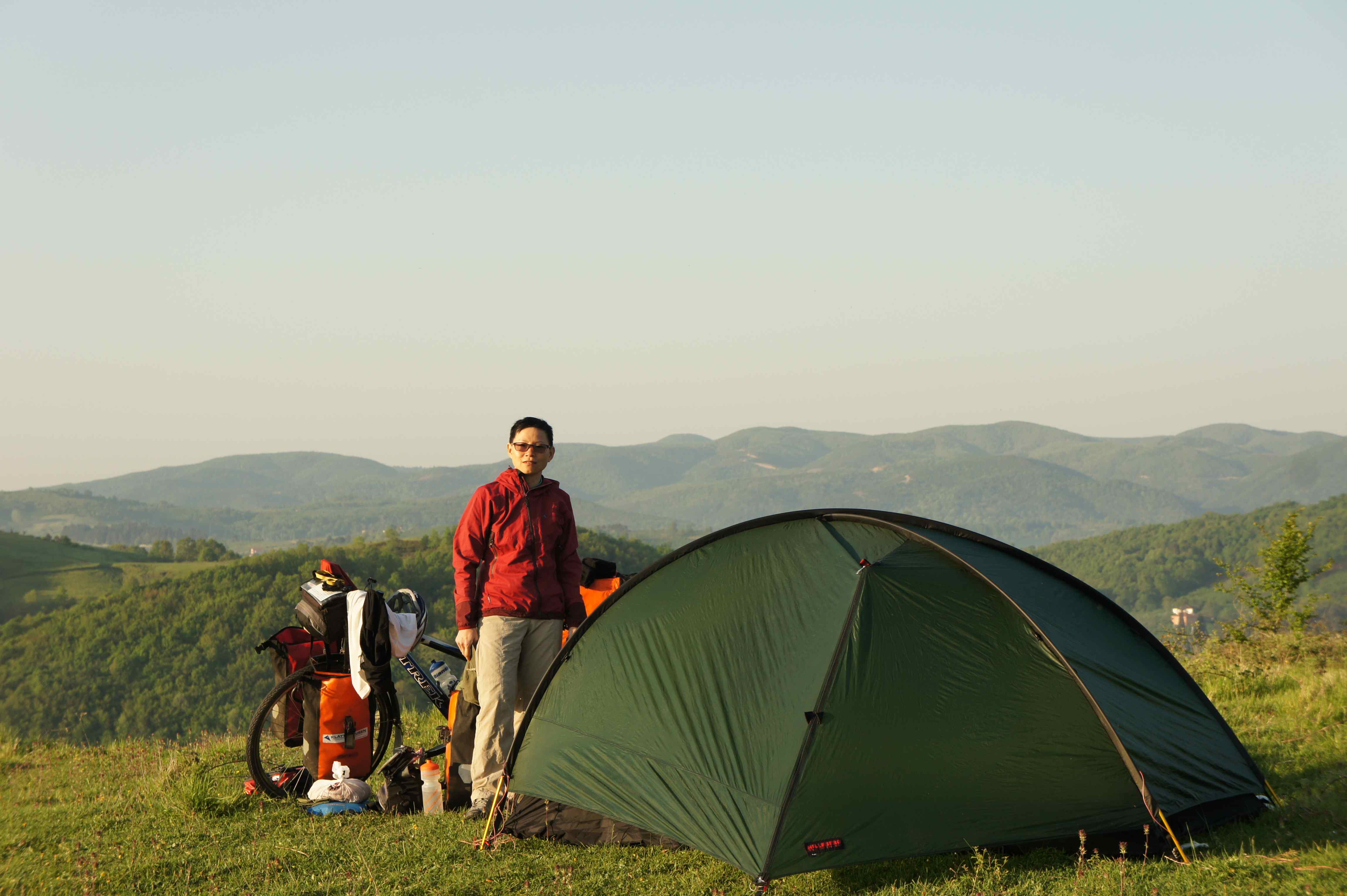 Room with a view…