Earlier during this trip I wrote my blog posts in the evening of the same day. Now that routine has changed and I tend to write the day after instead. It is so hot during the day that taking a break to avoid cycling during the hottest hours and instead do the writing, photo management and other administrative things such as cycling and budget follow up seems to be a smart way to use our time. This time I just can’t avoid showing you how I am sitting writing this very blog post at a cafe in the town of Akcakoca with the Black Sea below me. There is however no internet here so the picture will be old when you see it. 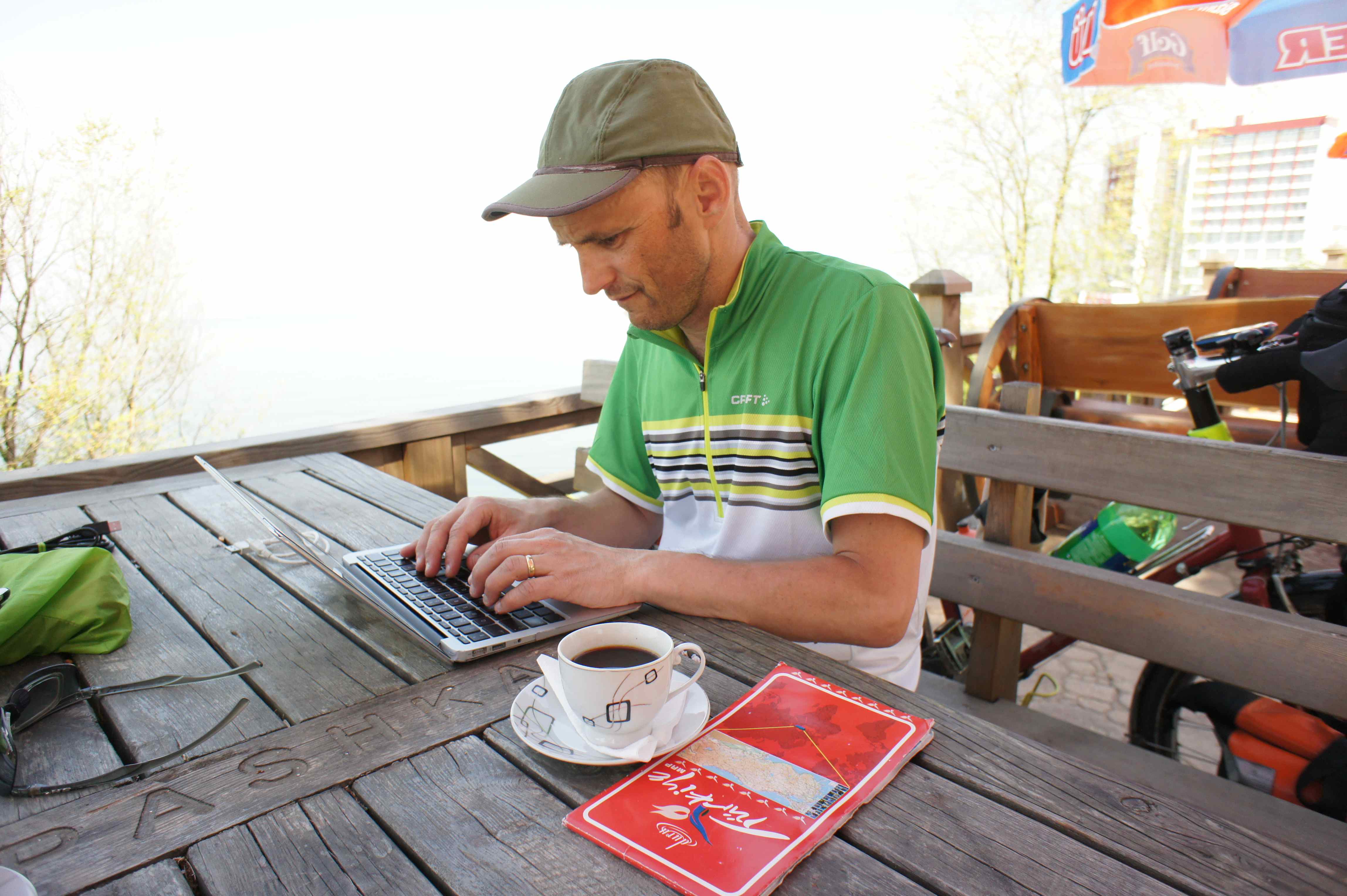 Back to Day 42 – the day of the neverending rollercoaster.

The hilltop we camped at was at 75 meters altitude. Immediately after starting cycling we rolled down to 25 meters altitude and stayed there for only a few meters before starting climbing towards 200 meters where we also stayed for only a few meters. The day was characterized by numerous small hills that took us up and down without any really flat parts in between at all.

The climbs were not very high, but they were many and very hard in the mid day heat. We like to cycle in mountainous regions, but all short climbs today were on hills and not mountains. Going up to immediately go down again made us feel like never getting anywhere and everytime an uphill struggle ended with a quick descent we said to each other

– “is this downhill really necessary? Can’t we stay at the altitude we’ve just gained?”

Not long after we started and were racing down a hill we saw a stone on the road. The one who rides first always warns the one riding behind for upcoming obstacles on the road such as potholes, large stones or crushed bottles. This time I was cycling first when I saw what I thought was a stone in the middle of the road. I pointed at it to warn Wej but when I got close to it I saw it was a turtle. Being in a curve in the middle of the road where sometimes large trucks pass is not the best place to be if you are a turtle. Wej who like most other Thai people consider turtles as sacred animals carefully carried it to the side of the road and released it in the grass close to a little pond. 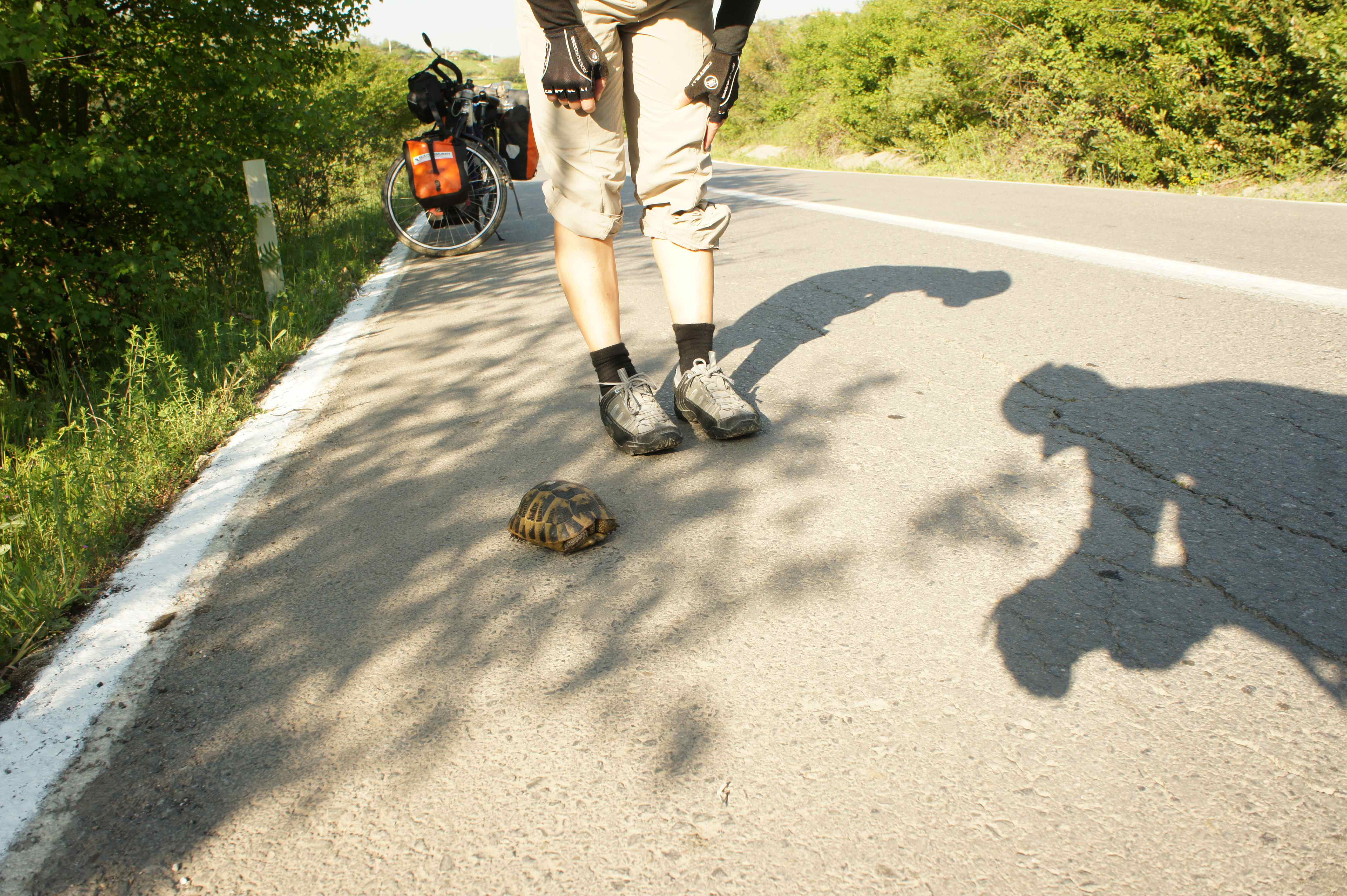 After some 30 kilometers we needed a break and found a small gas station. We love gas stations and if we had counted all stations we have visited so far I think we would be somewhere around 150 by now. This station was not as fancy as many others but it had the free bathrooms for visitors to use and a tea house where the villagers sit and drink tea, gossip and play cards. Now the villagers were sitting outside, but being a little bit cooler inside we prefered to stay there. The owner was a young man and like at so many places before in Turkey he served tea and coffee free of charge. It seems like the hospitality of the Turkish people has no limits. 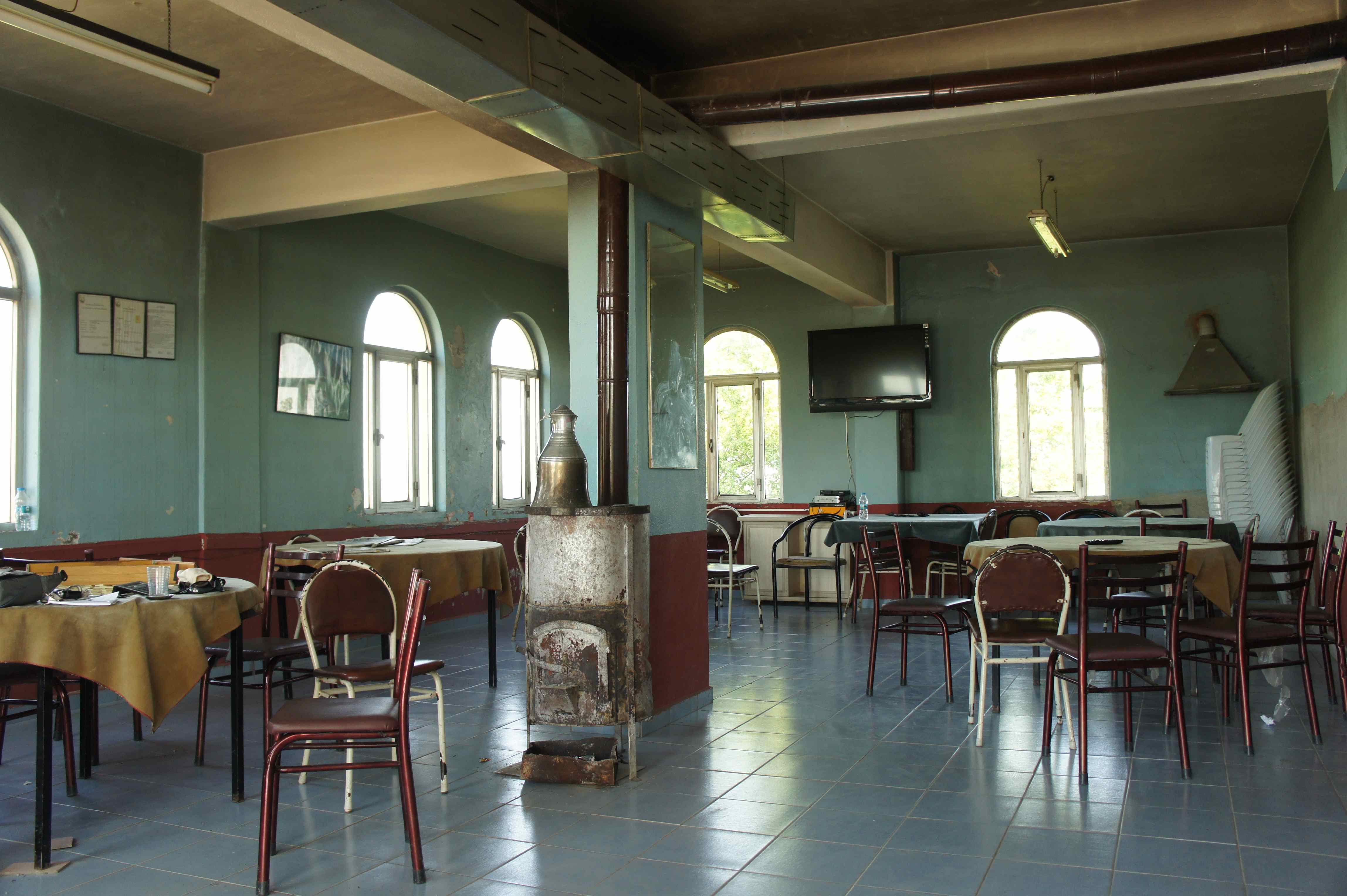 The cafe with some nice shade.

The last few nights we have cooked our own food on our multifuel stove. The fuel bottle was almost empty and this little gas station with the very personal service by the owner himself seemed to be the right place to buy 0.5 litres of petrol. The cost was 1.82 Turkish lira (7 SEK or about 80 euro cent) so the fuel price is not much different from in Sweden. We will see how long this bottle lasts but if we only use it a few times per week it will last for a month until we need to refuel. 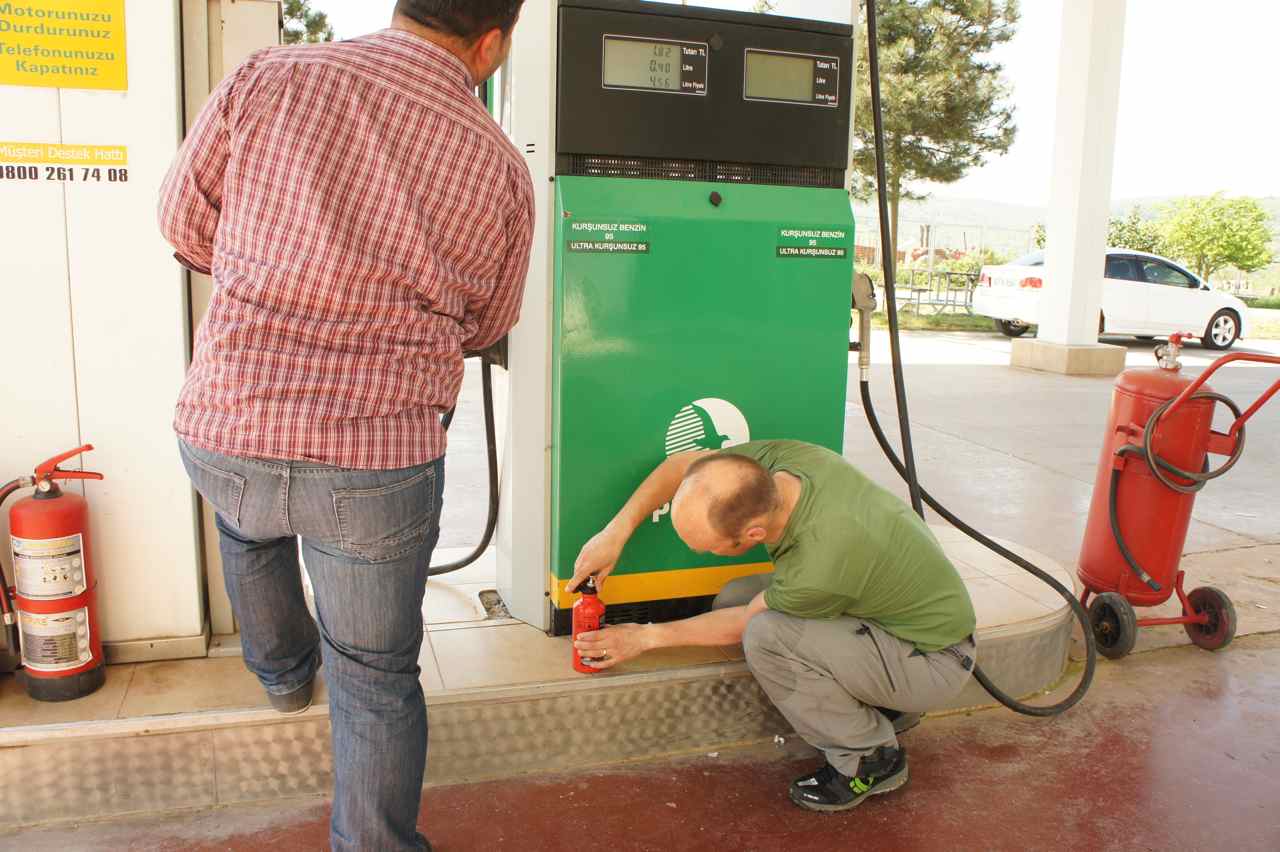 We stopped in the town of Kandira to have lunch at one of the döner restaurants in the city centre. I really enjoy going to restaurants and try to communicate what I want to eat and then compare if I got what I tried to order or something else 😉 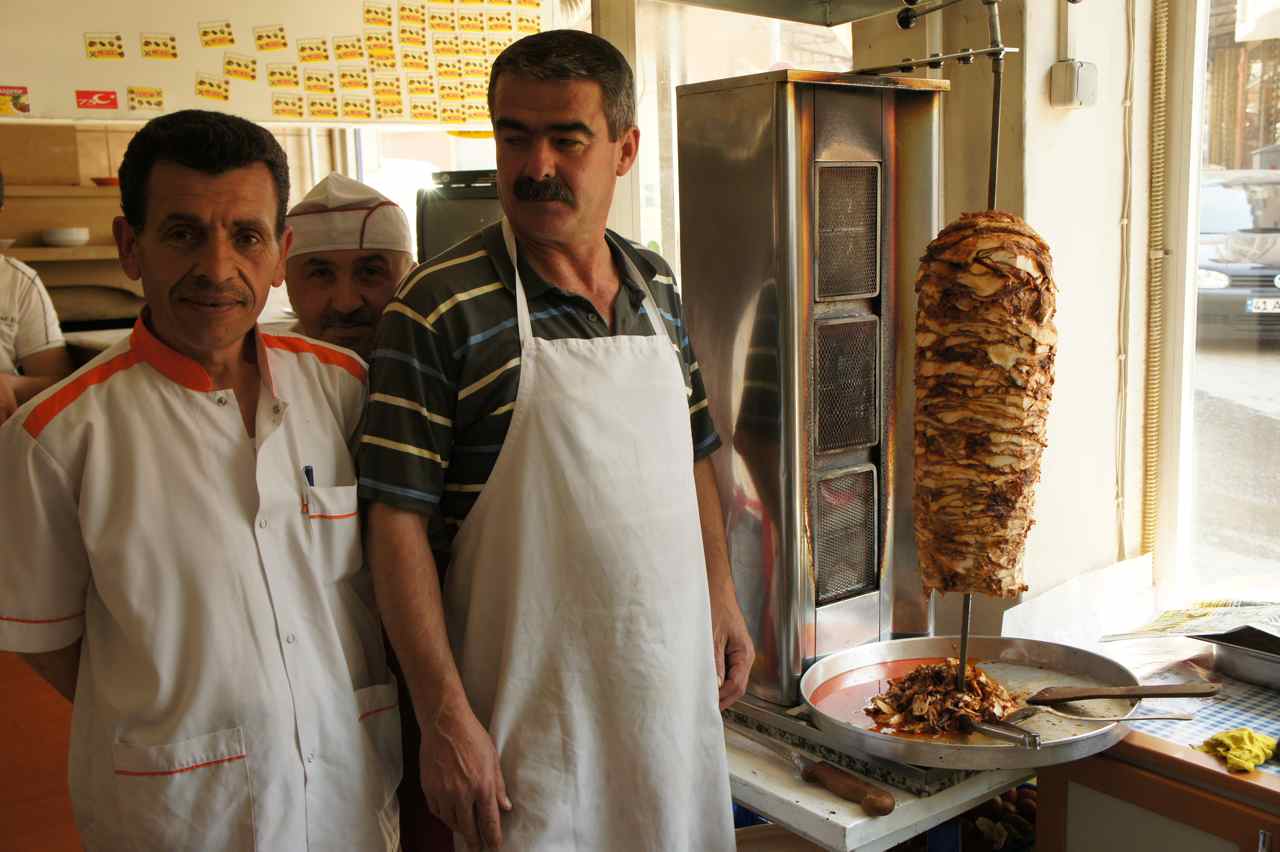 The guys and the döner roll in the lunch restaurant.

At the main square of Kandira there was a fountain with drinkable water. We filled our bottles and also rinsed our caps, gloves and sunprotecting sleeves. We put them on all wet and it was a relief that lasted less than half an hour when everything was all dry again.

It seems like a majority of the people in Turkey smoke. Someone said to us that smoking is in the blood of the turks. I guess that all that smoke brings other stuff into the blood as well but at the square in Kandira I found a sign that appeared to be part of some anti smoking campaign. 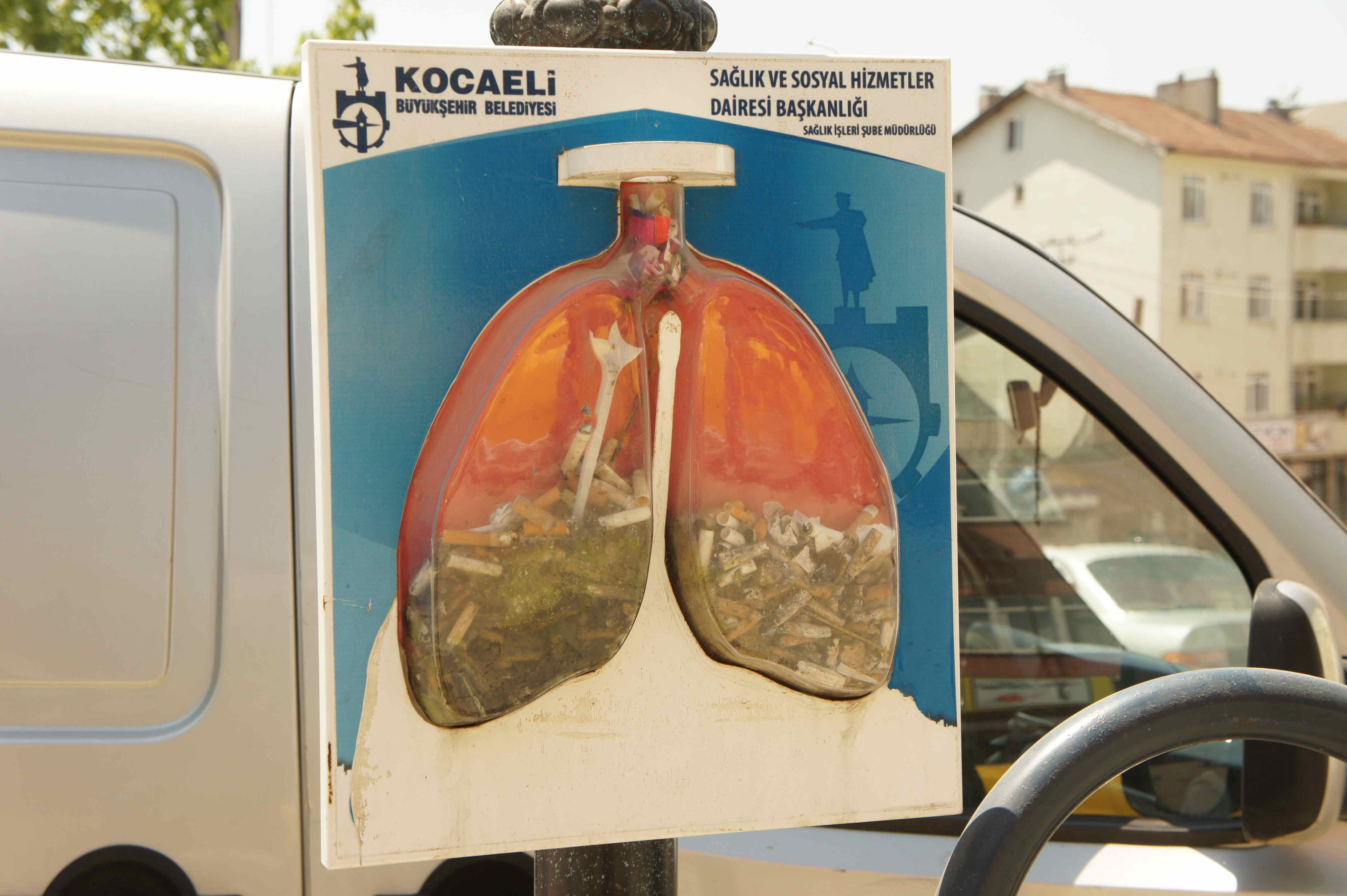 It seems that the Turks have taken measurements to keep their energy costs down in these times of ever increasing prices for oil and gas. Solar collectors with panels on the roof to let the sun heat water for use in kitchens and bathrooms seem to be very popular and can be seen on many roofs both in towns and on the countryside. 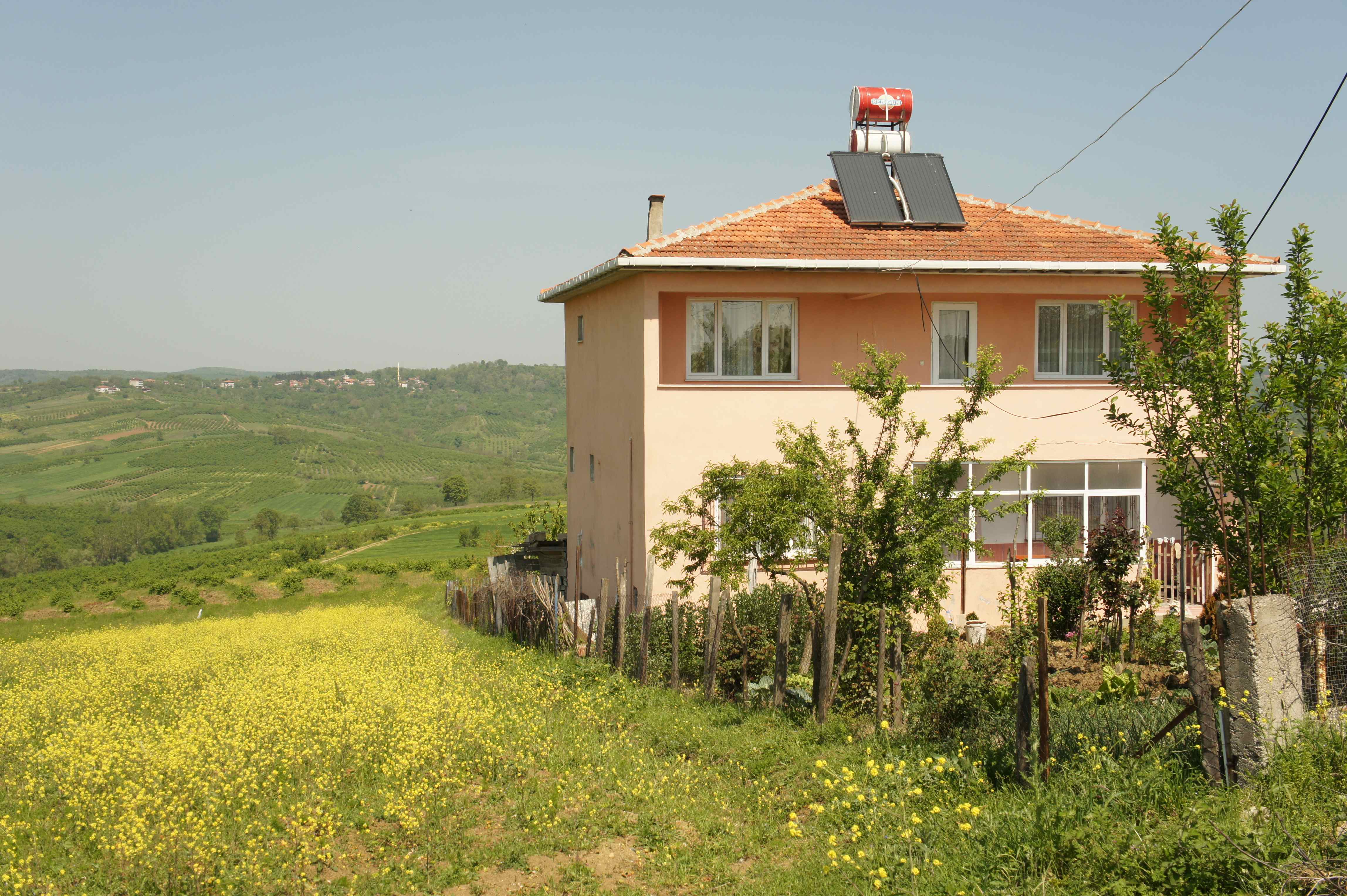 Solar collector on the roof.

After a long break to have icecream, update our blog and finishing a huge two litre bottle of sprite (we wanted the bottle itself since it fits perfect in my large bottle cage) we continued to buy some vegetables to use in our dinner. The dinner is usually spagetti with canned tuna, tomatoes and some fried onions. Not very delicious but simple to make and cheap.

It was much cooler in the evening and when we finally got close to the coastal road along the Black Sea we started to search for a good spot to pitch our tent. It was not hard at all. On one side there was a huge road construction going on and we could easily have put up the tent there, but we would have been very visable to everyone passing by. Instead we opted for the opposite side, close to the forest and among some low bushes. The ground was flat and nobody could see us, nobody but half of Turkeys population of mosqitous which forced us to make a quick cooking and evening procedure. 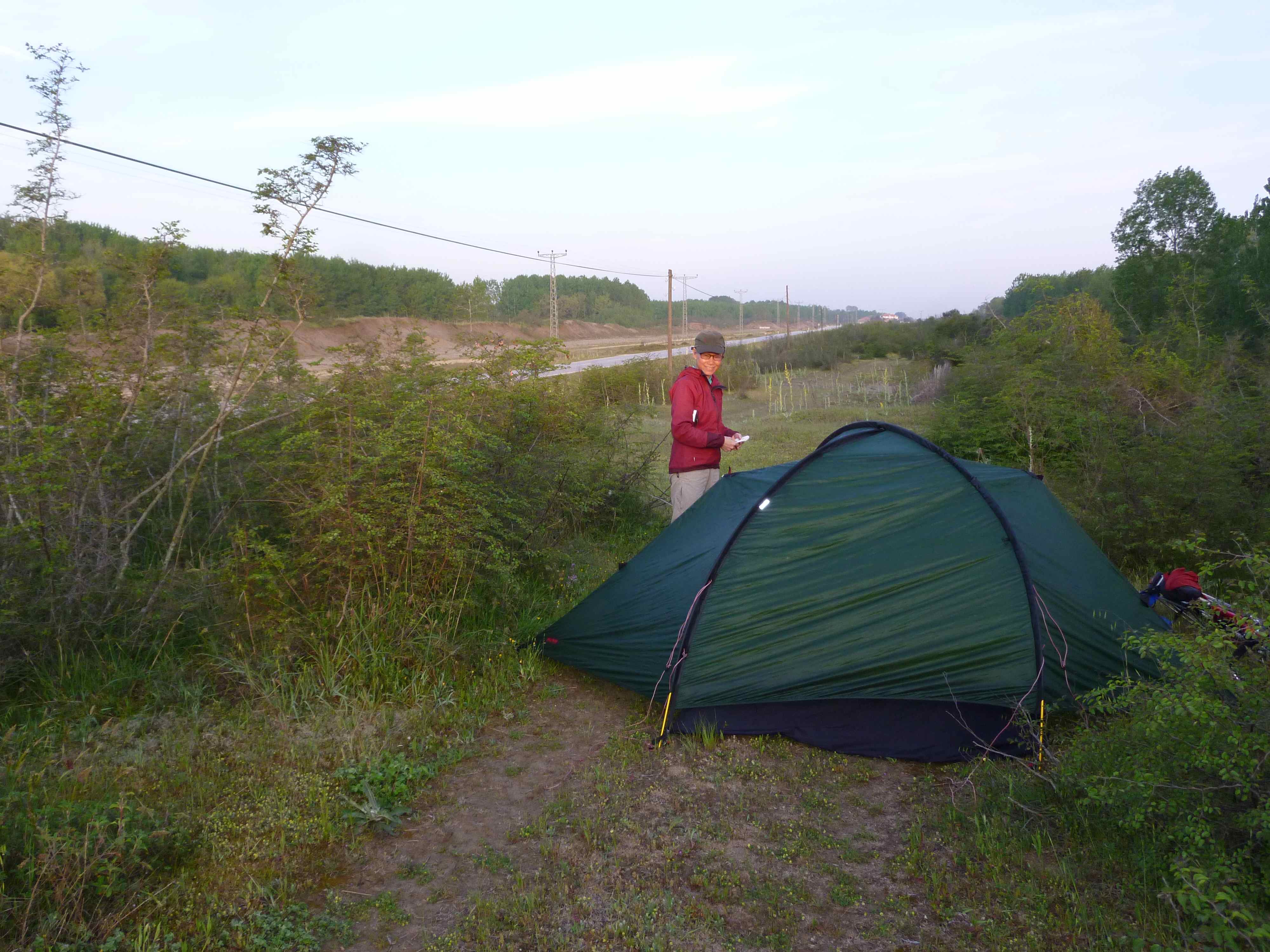 Camping close to the road and behind some bushes