It was nice to have an unplanned rest day. Elhovo didn’t have much to see and we had not planned to do anything either so we spent our rest day looking after our equipment, do some research on the internet and sleep. My duty is to clean the drive trains (chains, chainrings and cassettes) and the surgeon latex gloves I brought along are very useful. Working with oily things for two hours without access to proper oil dissolving soap is otherwise equal to many days with black fingers. 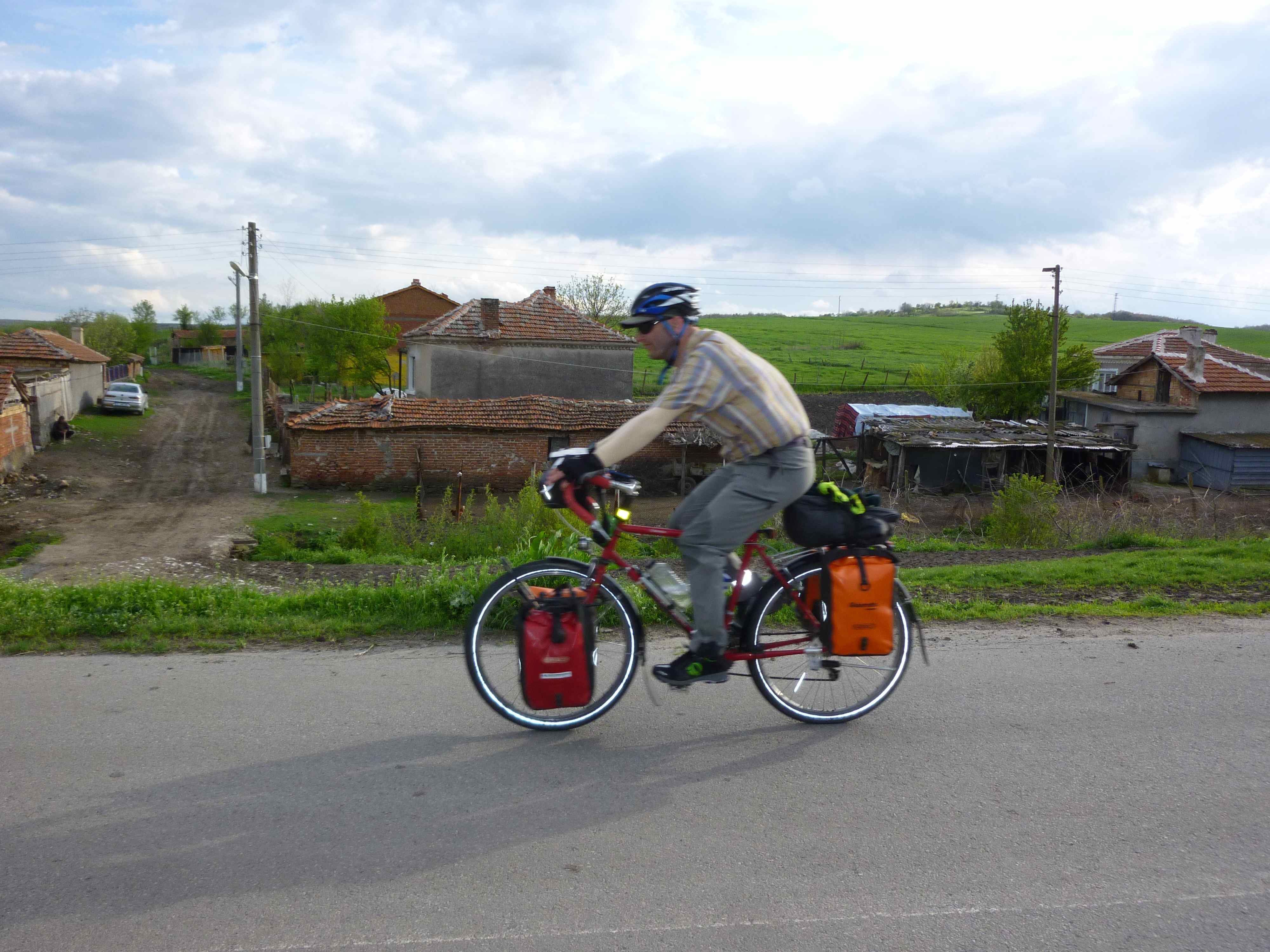 Wej took this photo when I speeded past her down a slope. When I saw her aim the camera I never thought it would work, but it did.

Late in the evening we searched the warmshowers hospitality network and found a host in Kirklereli some 60 km into Turkey. Sending a request less than 24 hours in advance is to try your luck, but we quickly got a reply that we were welcome after 6 PM the following day.

The weather was boring. Grey sky, 8-9 degrees and windy. The distance from Elhovo to the border was 24 km and with little traffic on the road and a nice tailwind on our backs the ride towards the border was very smooth. When approaching the border area we caught up with a seemingly endless que of trucks waiting to cross the border into Turkey. The line was about 2 km long and we saw absolutely no reason why we should wait at the end of that line so we rode past all the trucks – we then felt just like the turtle in the story about the rabbit and the turtle…. 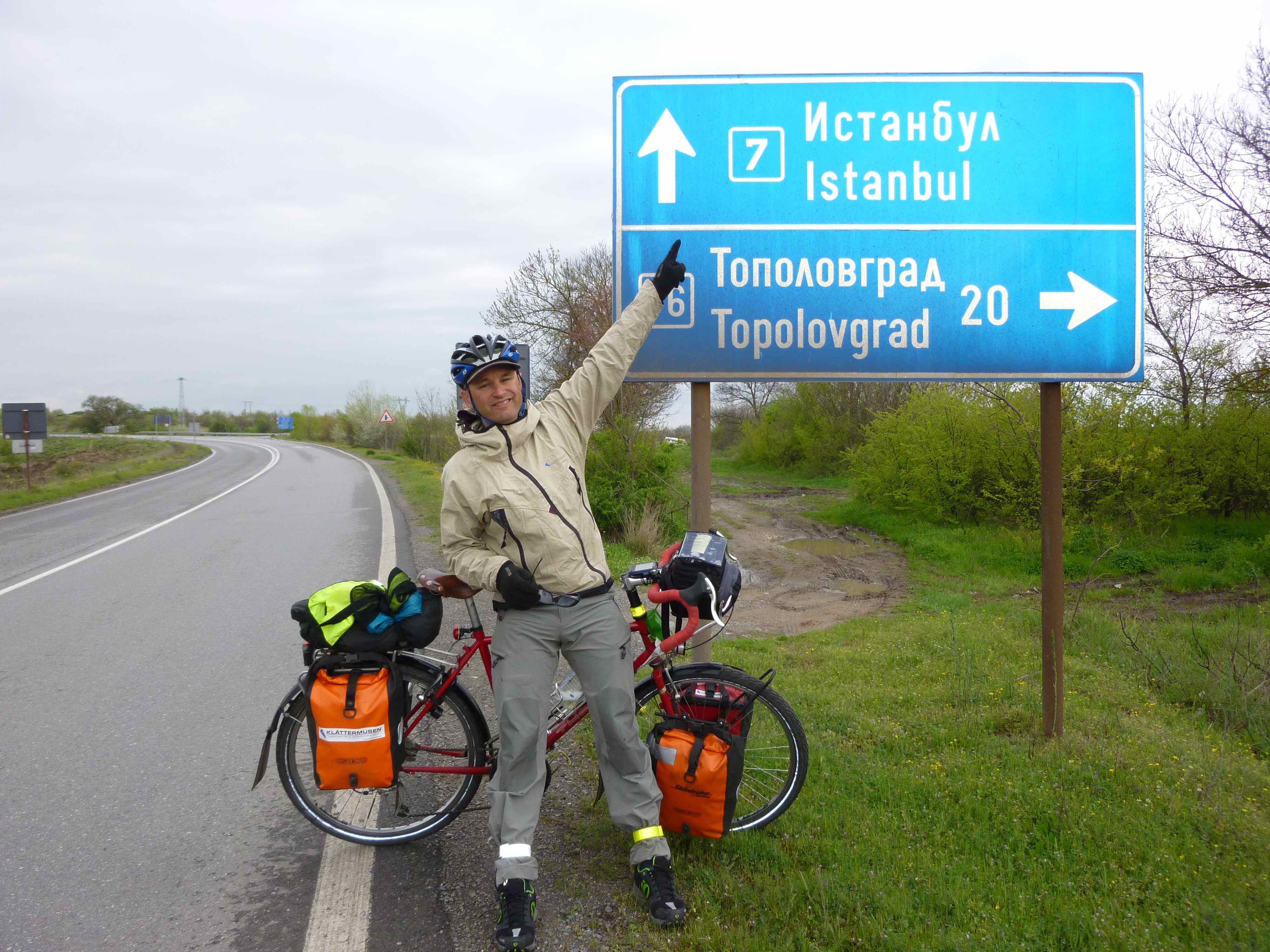 First sign of Istanbul somewhere between Elhovo and the border

In the immediate border area there was no movement and we thought the trucks had to wait for the border guards lunch break or something, but no….. As soon as we turned up a guy came out to check our passports. Actually we had to show our passport 5 times. First we showed them to the Bulgarian border police, then we rode 50 meter to the Bulgarian customs officers who checked them again. We then continued through 100 meter of no-mans-land before the Turkish border police checked our passport. That was a slow procedure as he was checking each passport for several minutes – not strange that the line of trucks were so long.

After being cleared by the Turkish border police we rolled 50 meters to another little building where a guy checked our passports again. We don’t know for what reason or what authority he represented, but after a short glance in the passports he waved us thorugh. Then we continued another 50 meter to the Turkish customs where the passports were checked a 5th and last time before we were properly inside Turkish territory. This guy asked if we had come from Bulgaria. Hmmm – what to say??? I wanted to reply “where else do you think we could have come from?”, but me experience is to always smile to border guards so my answer was. “Yes we came from Bulgaria” and pointed to the Bulgarian side 100 meters away. 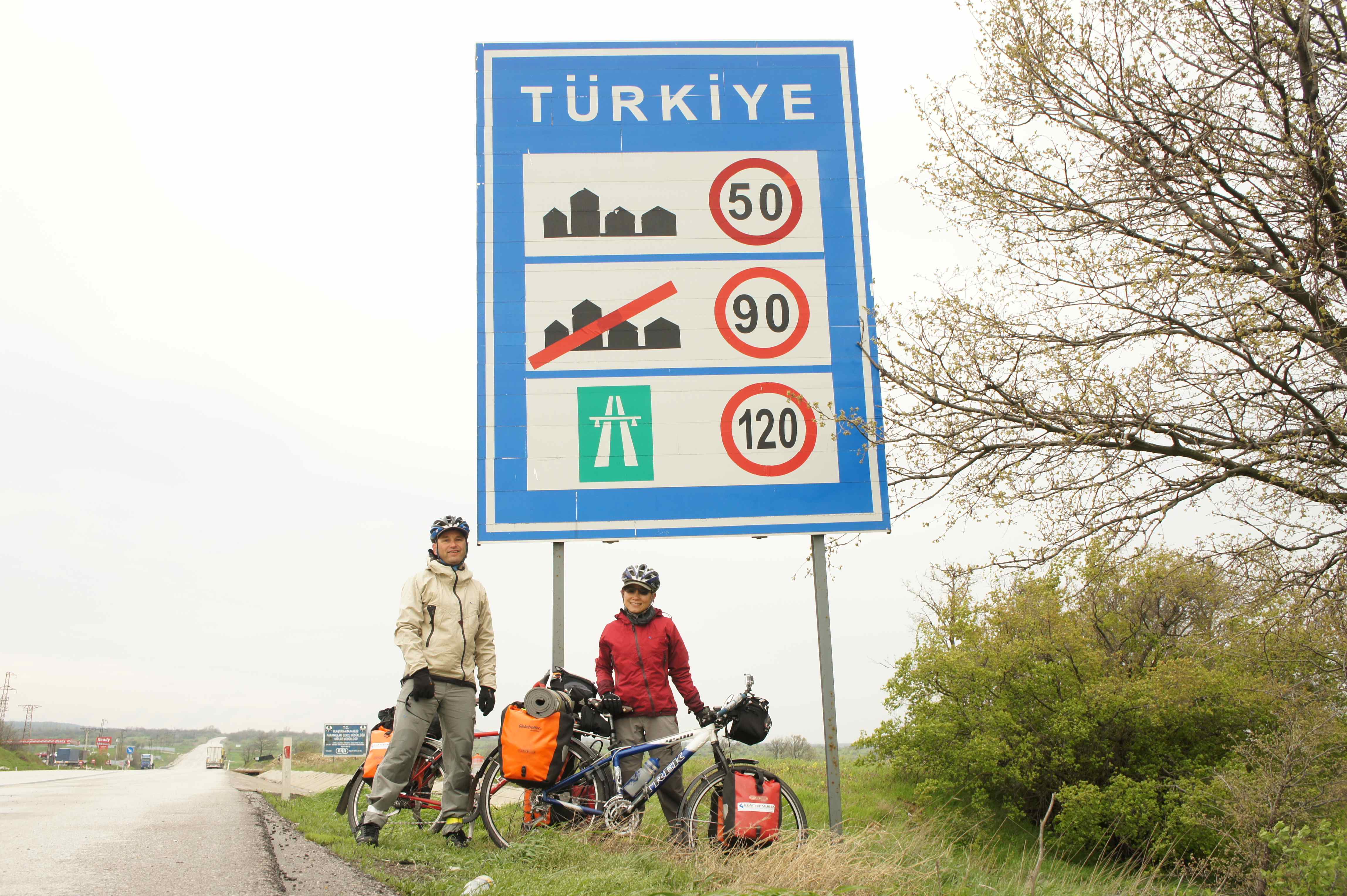 The entire border procedure took about 20 minutes and during this time we were mainly standing still and my toes went numb. This is by no means any new sensation to me – I am very used to numbness in my toes after cycling through an icy central Europe, but I must admit that I did not expect my first action in Turkey to be a quick entry into a restaurant just inside the border to get my feet re-heated…

Although a simple roadside restaurant, it did set a new standard for our lunches and we look forward to a lot of more culinary explorations. 🙂

Riding from the border was super smooth. A wide road with smooth asphalt and nice shoulder for us to ride on. One could think that there would be many trucks from the line overtaking us all the time, but this never happened. Few trucks came and maybe they are still waiting in that line. 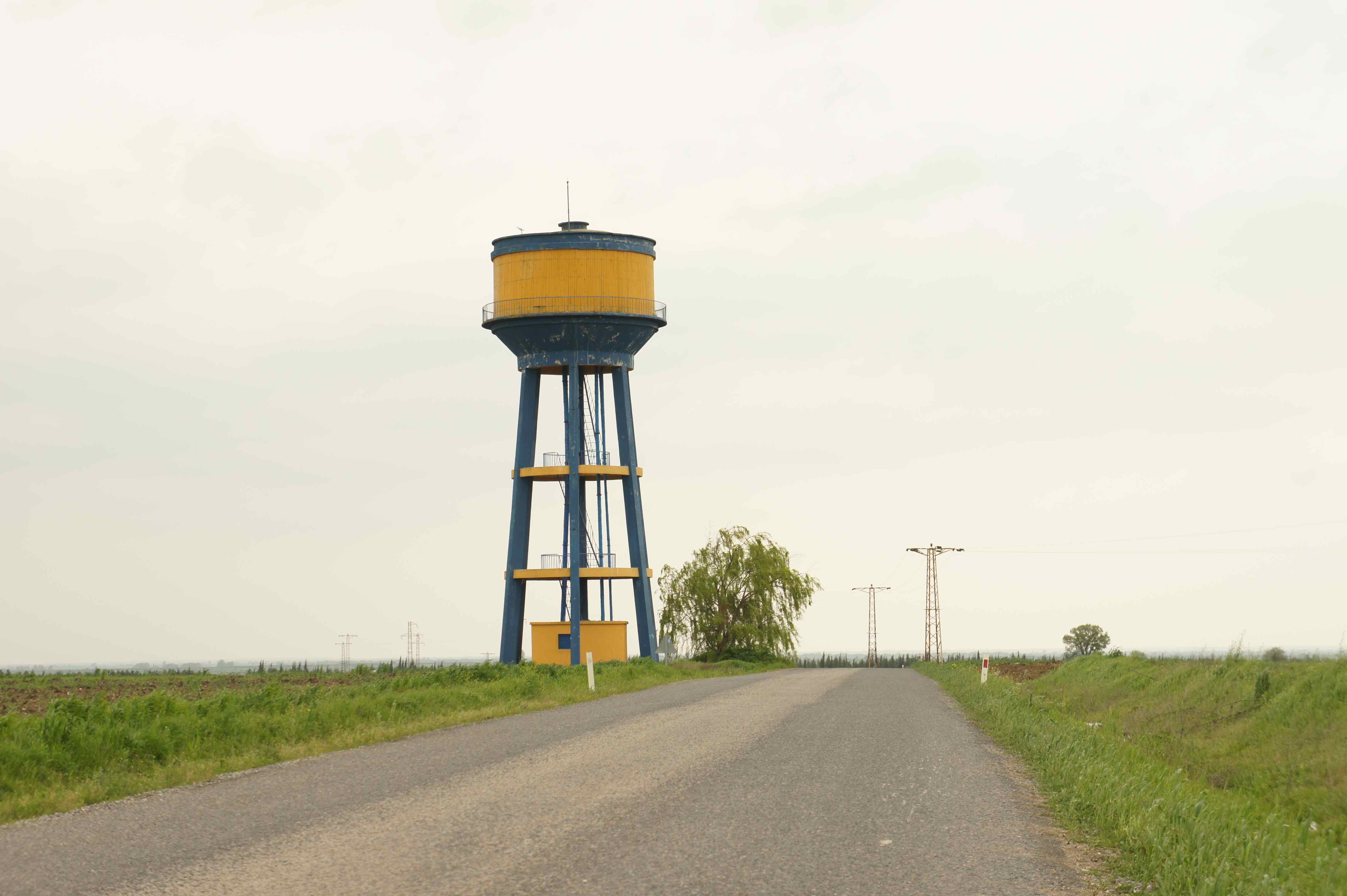 A Swedish water tower on the turkish countryside? Or is it perhaps the latest design of Ikea stores???

After 30 km we left the big road and turned to a smaller road leading through villages and along farmlands. It is interesting how so many things can change by just passing the imaginary line a nations border really is. Horse carriages were gone and there were a lot more tractors than we ever saw in Bulgaria and Romania. There were fewer dogs that ran around freely and those that were running around neither barked, nor chased us. Church towers were replaced by minarets and in every village we passed old men were sitting at a table to drink tea and chat with each other. The countryside seemed to be more alive in Turkey than we had experienced during the last days in Bulgaria and Romania.

The tailwind we used to have turned to a strong side wind once we had turned to the smaller road. Tailwind is always best and headwind the hardest, but strong wind into the side is probably the most difficult to handle since it affects the balance.

After a navigational error the side wind was gone and replaced by a strong headwind that promised to make our remaining 15 km tough. We wanted to make sure that we didn’t go in the wrong direction so when we saw a group of men in front of a building we stopped and tried to ask for directions by pointing forward and say the name of the town we were going to. We got affirmative answers but were quickly invited into their lunch room to have some tea. We had absolutely no common language to use when talking to each other, but still we were invited. This was our first encounter with the famous Turkish hospitality. 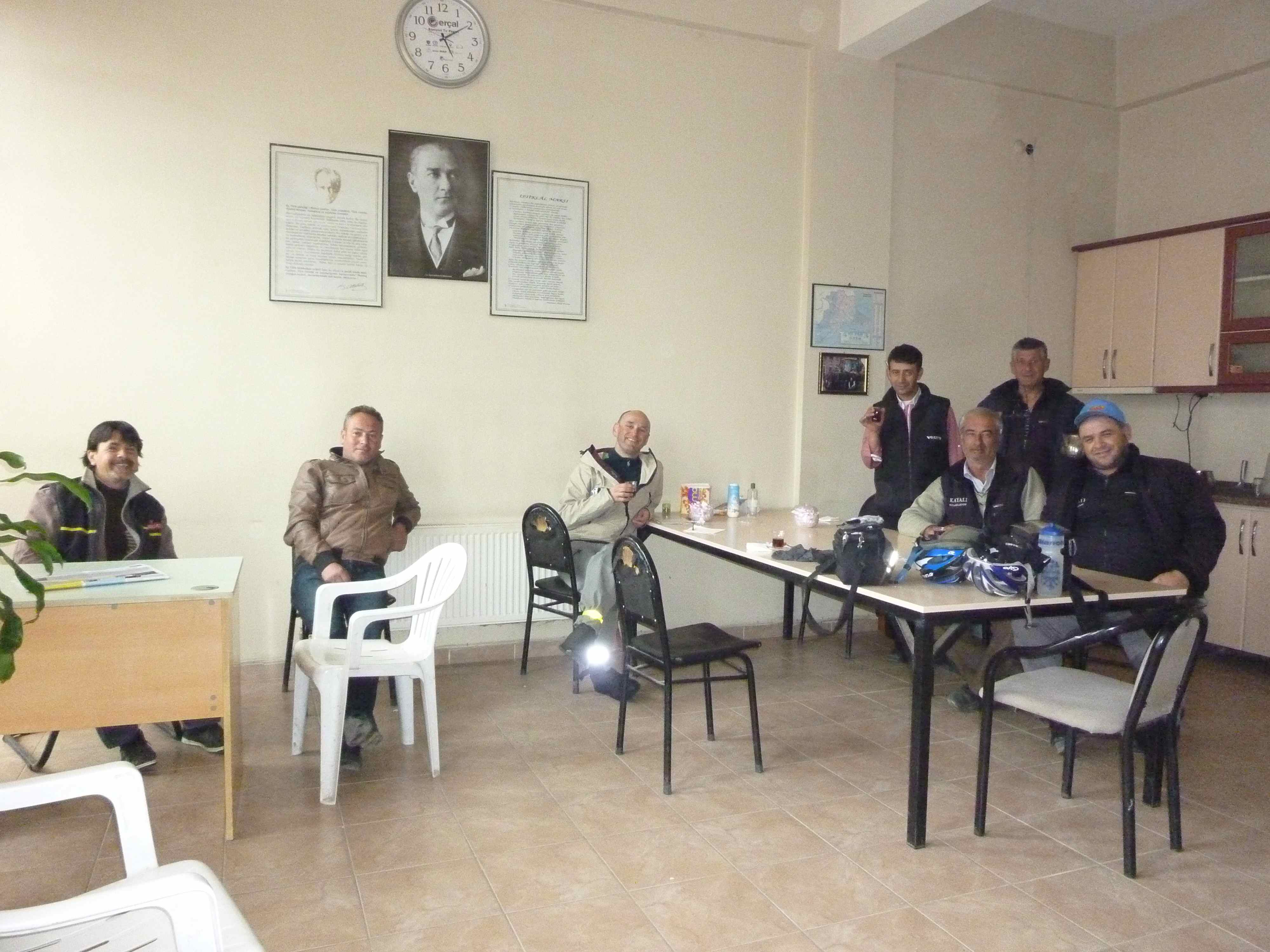 Invited for tea at the co-operative’s lunch room

5 km before arriving into Kirklereli city we sent a text message to our host Selcuk telling him that we were approaching the city. When standing at the main square we sent another one telling where we were and less than 5 minutes later Selcuk came walking. We walked with our bikes to his house where his mother had prepared a lovely soup with green peas and woodcock (Morkulla in Swedish). I have heard that its meat should be really tasty but had never tried it before. Now I can confirm that it truly has a very delicous taste.

Long discussions about everything followed with Selcuk and his parents and these kind of meetings is the most wonderful parts of a trip like this. We will do our best to continue to have as many meetings like this as possible.