Our host Selcuk only needs 20 minutes from waking up until leaving for work. We had some tea with him, talked a little and then said good bye when he left. We were now alone with Selcuk’s parents whom we had no common language with. They were very nice people and at the breakfast table we got our first lesson in Turkish.

We pointed at things on the table such as tea, coffe, spoon, salt, tomatoes, cucumber, cheese and Wej took notes in her little notebook. When she had noted enough of breakfast related words, we took the lesson further and asked for road travel related words such as left, right, road, straight ahead, bridge, hill, intersection etc. 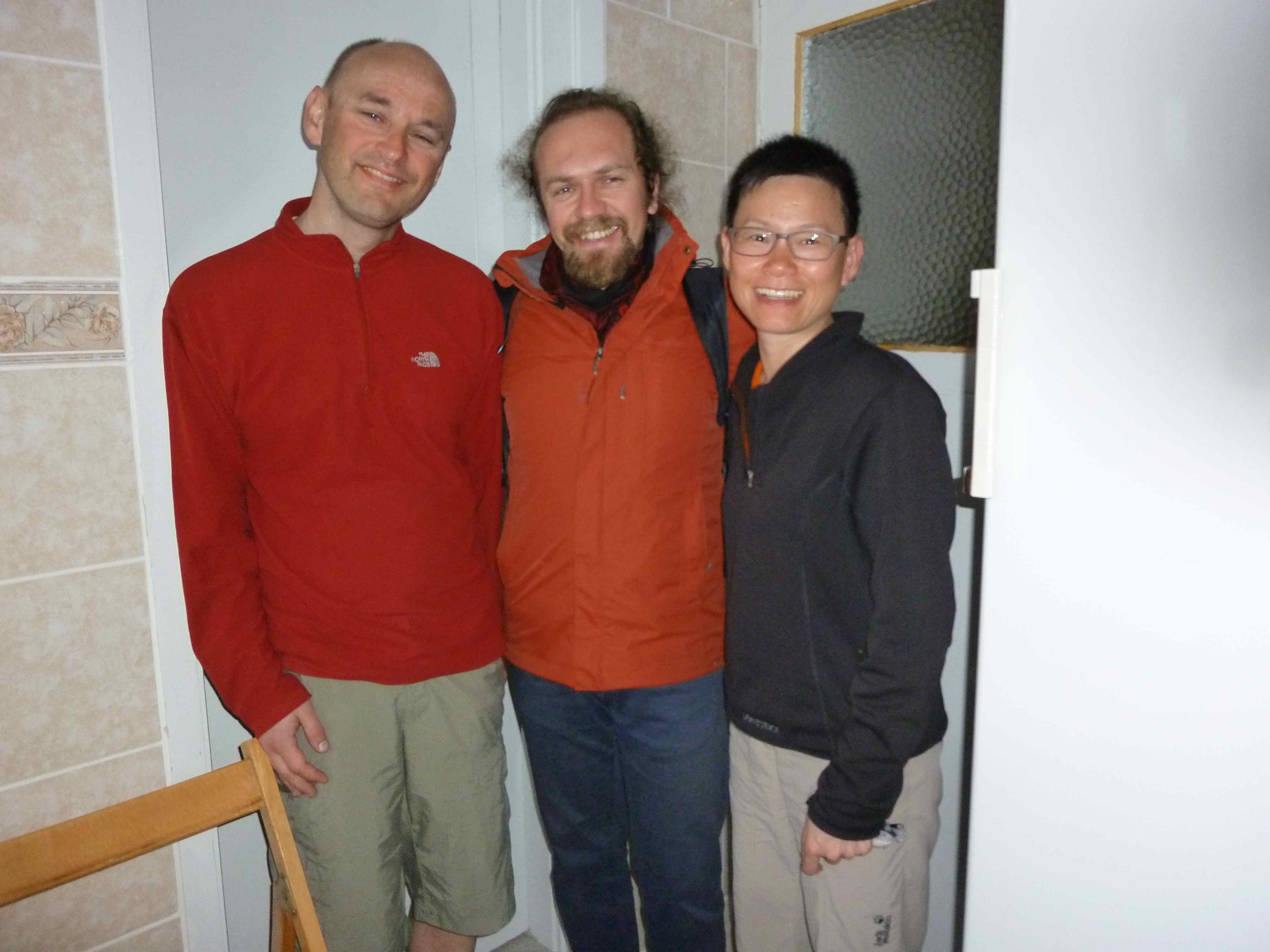 Saying good bye to Selcuk when he left for work.

Getting to know the nouns was not difficult – we only needed to point, but when we tried to get into adjectives such as hungry, full, hot, cold the lesson turned into a game of charades. It was very funny indeed and all four of us laughed a lot.

When it was time to leave Selcuks father jumped up on his motorbike and drove ahead of us to guide us through the city center to the road we planned to ride on.

Staying with Selcuk and his parents was really fun and interesting and we enjoy this kind of meetings very much and hope to get many more along our way. 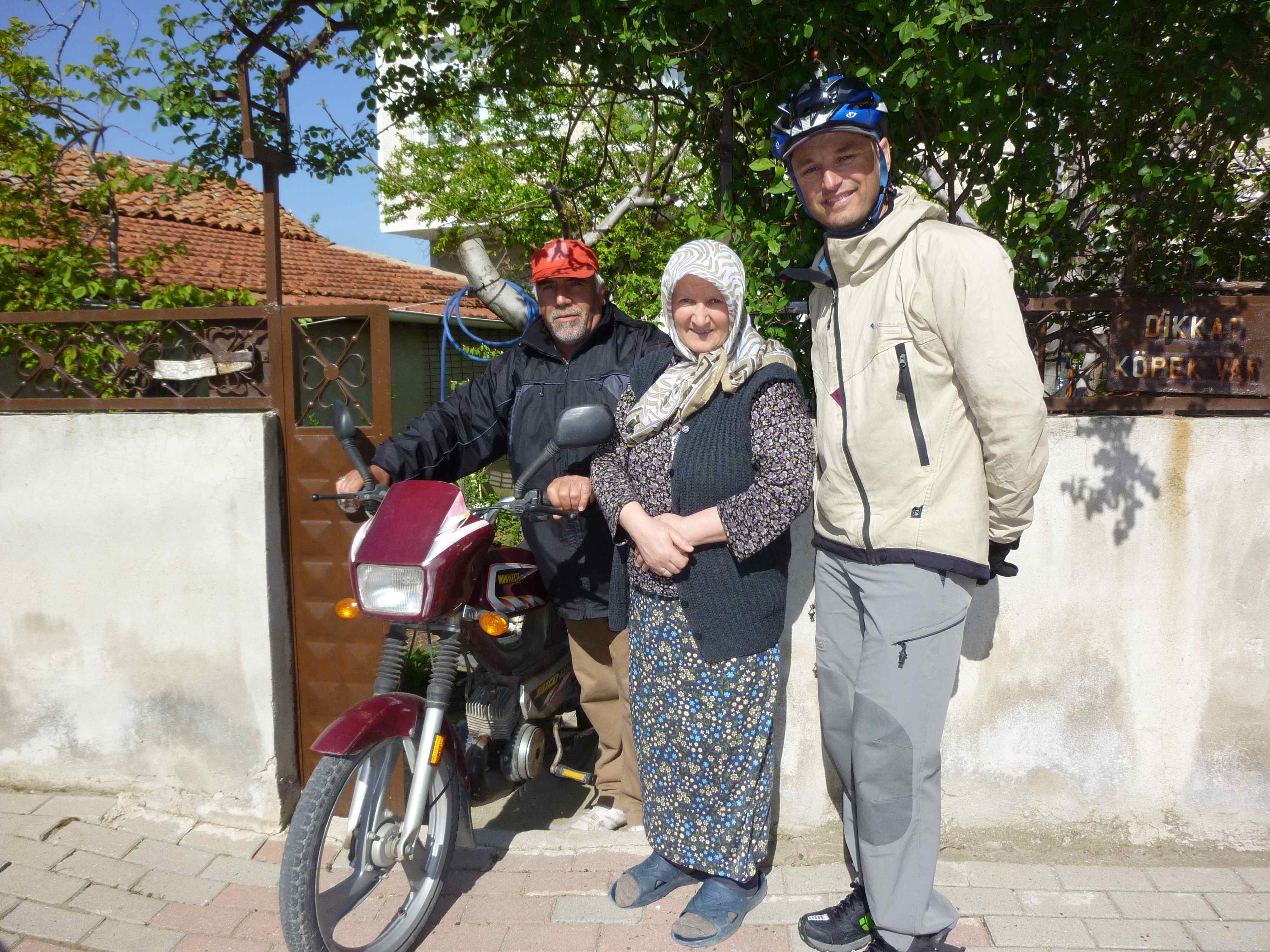 We would like to say a big big big THANK YOU to the Aslan family for your hospitality. We wish you all the best for the future and to Selcuk we’d like to say – Good luck with your plans to build that cottage. If you visit Sweden, please drop by our home.

Selcuk had adviced us to visit some places along the way. We didn’t have time to see them all so we chose a small Roman amfiteater that was discovered and excavated only 10 years ago. My knowledge of the history of the Roman empire definately needs to be refreshed so I’ll try to spend some time doing some googleing about it. Carrying a computer and access to internet makes it easy to catch up on things one have forgotten 🙂 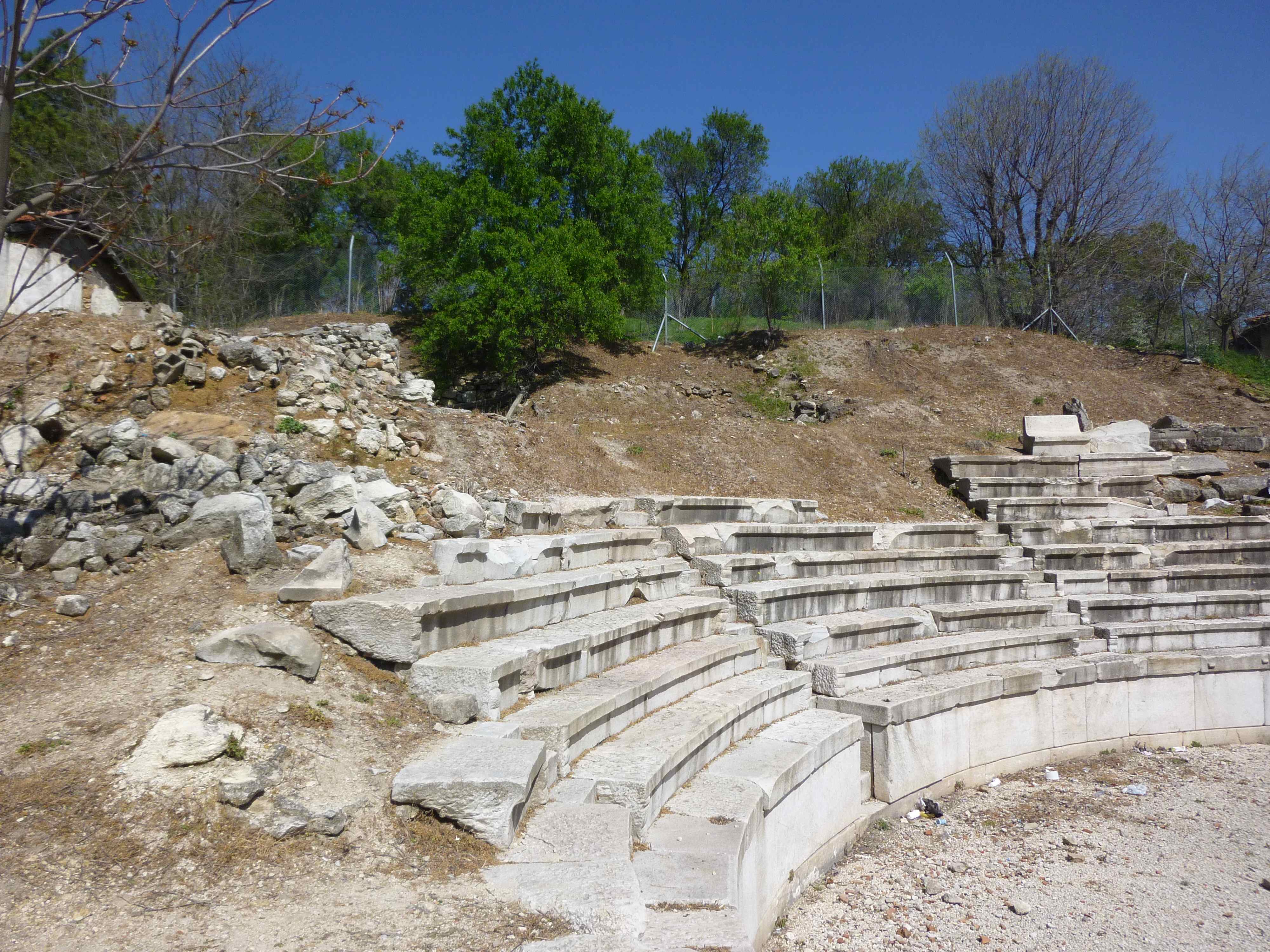 In the afternoon we rode through small villages and a kids on the school yard shouted ”hello” and ”what’s your name”. Sometimes we stopped to have a word with them and other times we waved and ride through. Apparently not so many tourists visit that area.

We wanted to go as far as possible in order to have Istanbul within reach the following day, The wind had grown stronger during the late afternoon and either the road had turned or the wind shifted direction and provided us with a nasty headwind. We then decided to turn to another road in order to go southwest instead of straight to the west – this gave us a pleasant tailwind during the late afternoon.

Our whish to reach as far as possible led to the decision to camp and since we didn’t know if we would get running water to do the dishes we stopped in a town to have dinner. Watching the bikes from the inside of the little restaurant was impossible so we decided to sit outside. When cycling in the sunshine it was nice, but sitting outside in the shade was terribly cold. Our termometer only showed 7 degrees…. Who said it couldn’t be cold in Turkey? 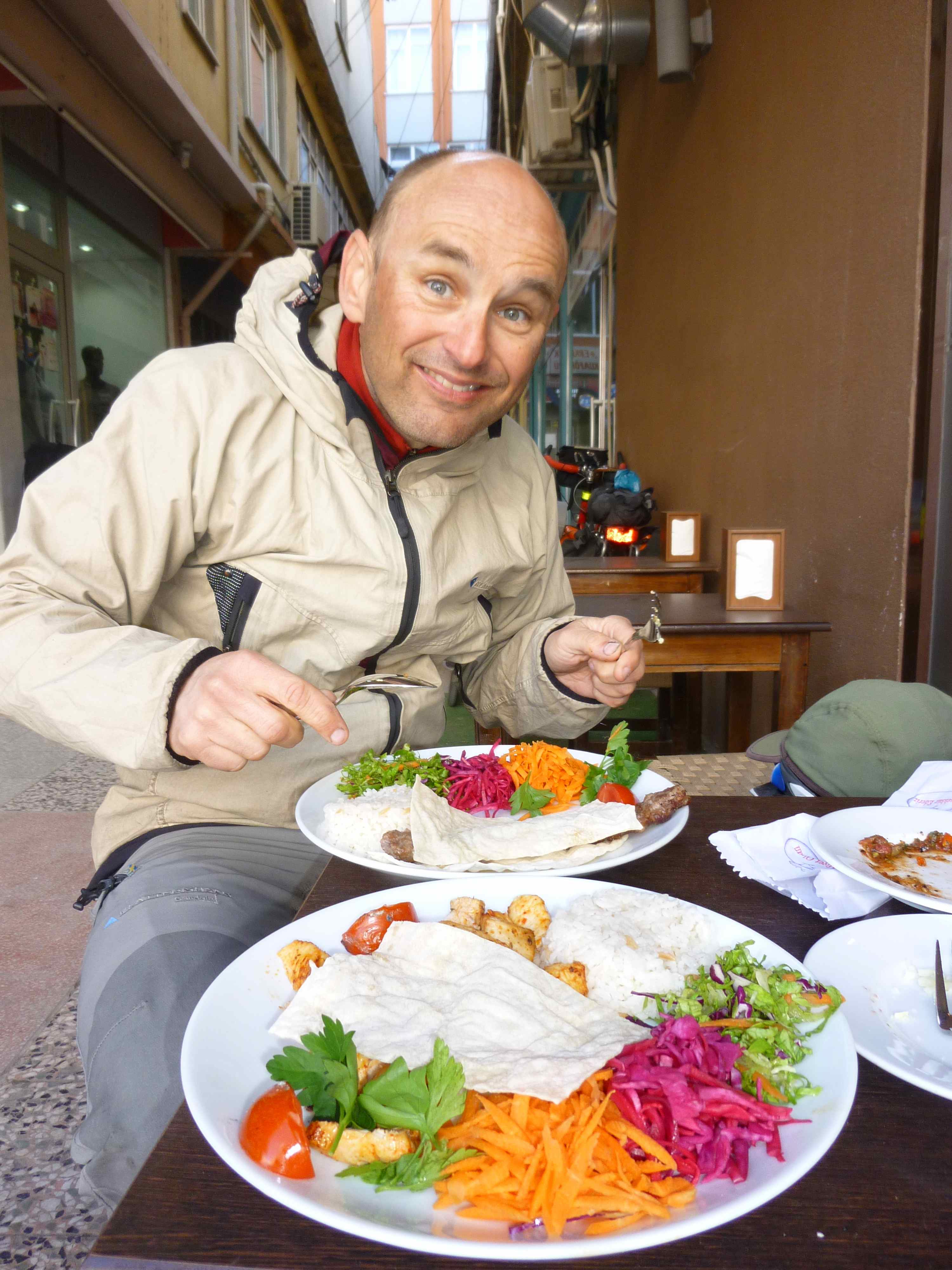 Freezing outside the restaurant while enjoying tasty food

We then continued in the direction towards the Marmara Sea. When only 30-45 minutes of daylight remained we went in to a gas station to fill up water and go to the toilet. The guys working there immediately welcomed us in and offered us hot tea and asked where we were heading. Wej explained that we were heading to Istanbul and then to her home in Bangkok, then she smiled her most charming smile and asked the guys if we could put up her tent behind their gas station. The answer was yes and they showed us a place behind a storage container.

As soon as the tent was up, sleeping bags rolled out and mattresses pumped, we walked back to the gas station to have more tea, eat our sandwhiches and boiled eggs that Selcuk’s parents had given us, brush our teeth and so on. Now the night shift had started to work and they also wanted to hear the strange story about cycling to Bangkok. 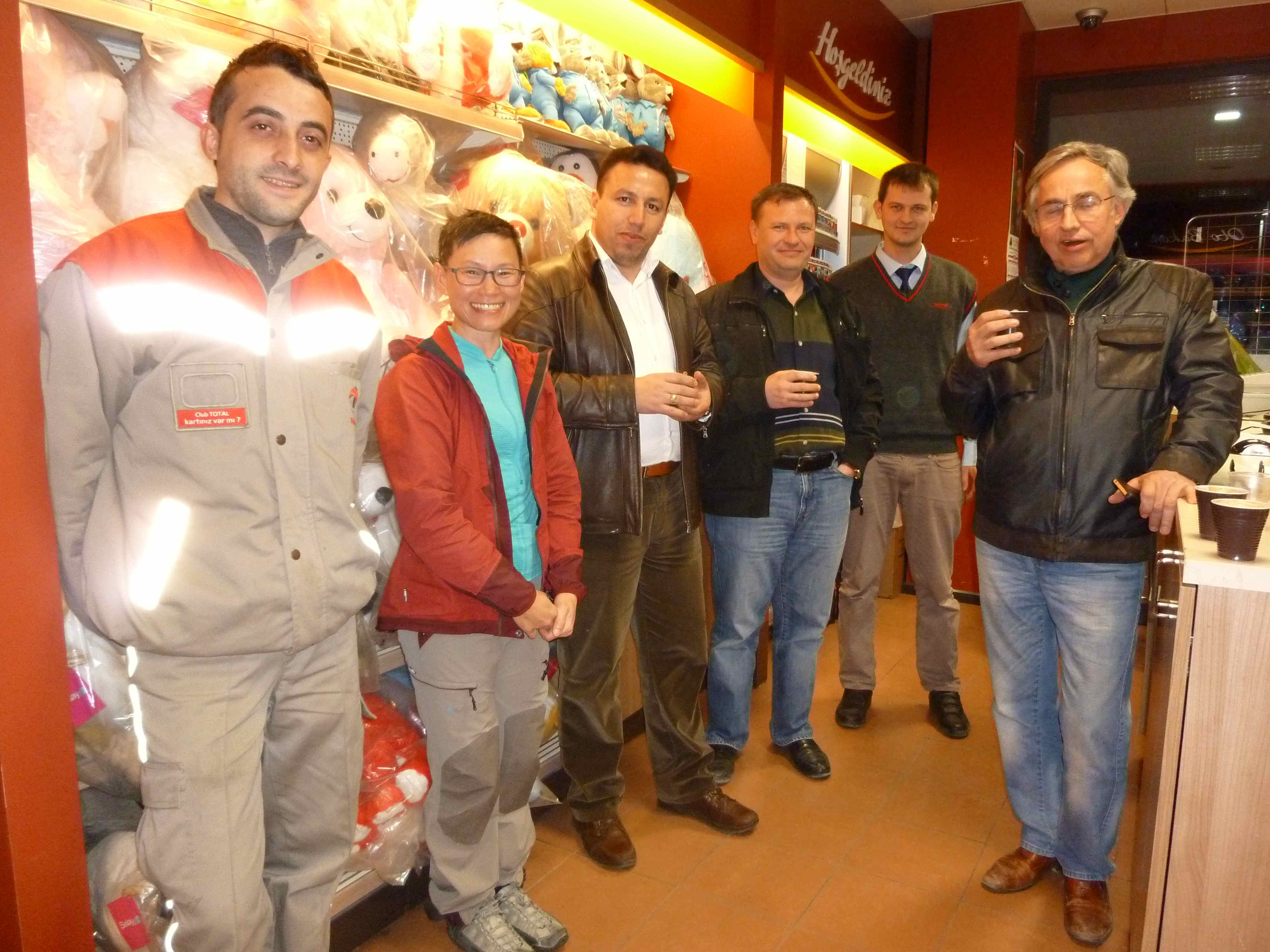 Wej, the staff and some customers at the language cafe turned gas station

Since there were not so many customers at that time of the evening we had plenty of time to communicate. When having the lesson with Selcuk in the morning we pointed at things and noted in the note book, but now we used a more modern way to communicate – google translate…. 🙂

The cashier had a computer with internet and we all stood around it typing in our questions and answers while also using sign language. Using the google translate the 25 year old cashier proudly even managed to tell about his pilgrimage to Mecka earlier this year. Our conversations were fun and we all laughed a lot since google translate sometimes make strange translations.

The gas station provided free coffee and tea for customers at a machine outside the shop and the gas stations staff ran out to fetch more cups to us all the time. What a great hospitality…. We think Turkey will be a nice experience. 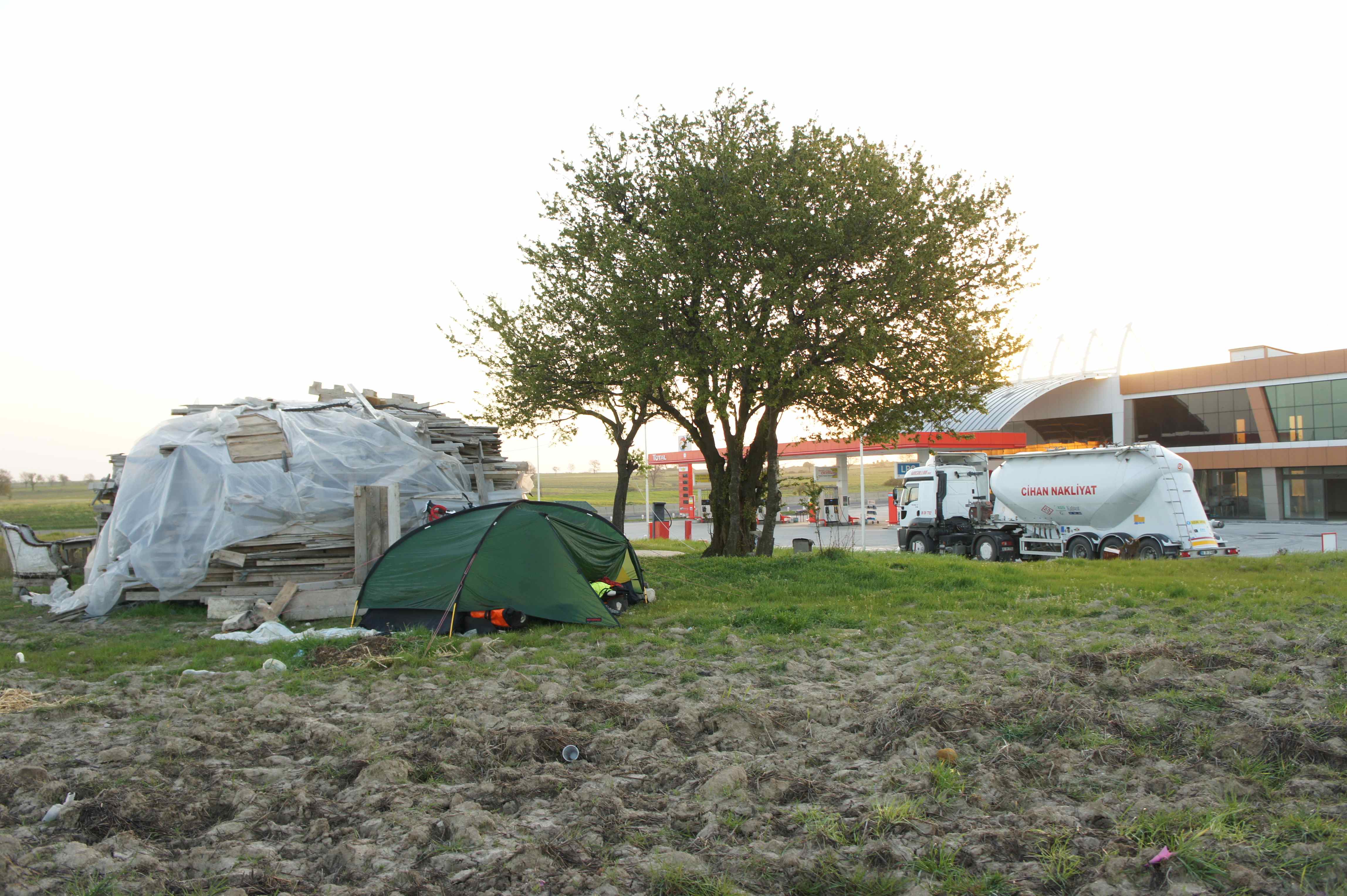