Entry Istanbul –  a tale of a nerve wracking experience

Today was a special day and this story will only be about the road and almost nothing about meeting nice people and other non-cycling related experiences….

The gas station we camped at was 110 km from Istanbul. Not that we think that a distance of 110 km is too long, but when going in to a mega city on a hilly road with intensive traffic, it can be a too big bite for a day.  We were where we were and there was nothing to do about it than to start extra early so we told the staff at the gas station that we would wake up at 6. Our alarm clock was set on 5.45 so at 6.00 we were already awake when one of the guys came and shaked our tent to tell us it was time to wake up.  In hotels you can order a wake up call – I don’t know what the same service should be called when camping at a gas station 🙂

We packed our things and walked with our bikes to the gas station where we were offered coffee and a sandwich. We also ate the remaining boiled eggs that we yesterday had got form Selcuk’s parents. The hospitality shown to us is so far amazing. 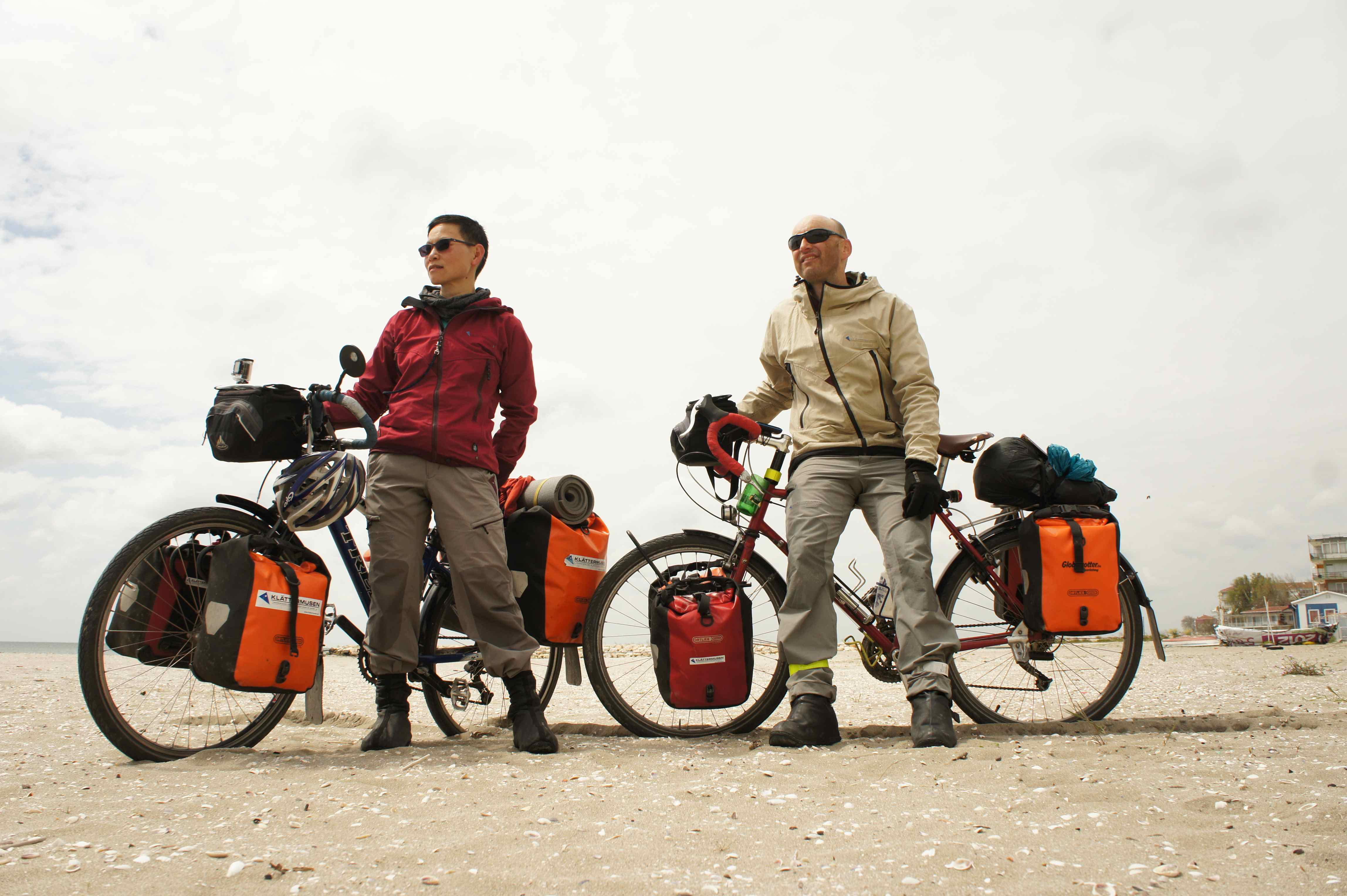 Finally at the beach of the Marmara Sea

During our first 20 km we rode on a big road with a wide shoulder. There was no wind and mainly downhill towards the Marmara Sea. It was a special feeling to see the sea again after only having seen rivers for a month. Last time we saw the see was in Gdynia in Poland (not counting our short trip to Sweden where we went sailing with friends).

The road along the Marmara sea was big and to start with not so busy and it was possible to cycle on it without paying any extra attention to the surrounding traffic. The hills were not very long or very steep either so it was a smooth ride for some 20 km, but then it all started…..

Istanbul has 15 million people and is on par with Bangkok when it comes to population. We have cycled a lot in Bangkok as well as in and out of that city a number of times so we know what cycling in a lively megacity can be like. Like in Bangkok, Istanbul has several highways and motorways that lead to the city and we chose the one that goes along the sea shore.

The traffic got more and more intense the closer we got to Istanbul but as long as there was a paved shoulder to cycle on there were no problems for us. But sometime when there was about 60 km left to town the shoulder was severely damaged and since we didn’t dare to ride on the road itself we cycled on the gravel beside the road. It was like riding on a single track with a fully loaded touring bike with trucks, buses and cars passing by continously. To add to our burden, we also faced a steady breeze straight into our faces. 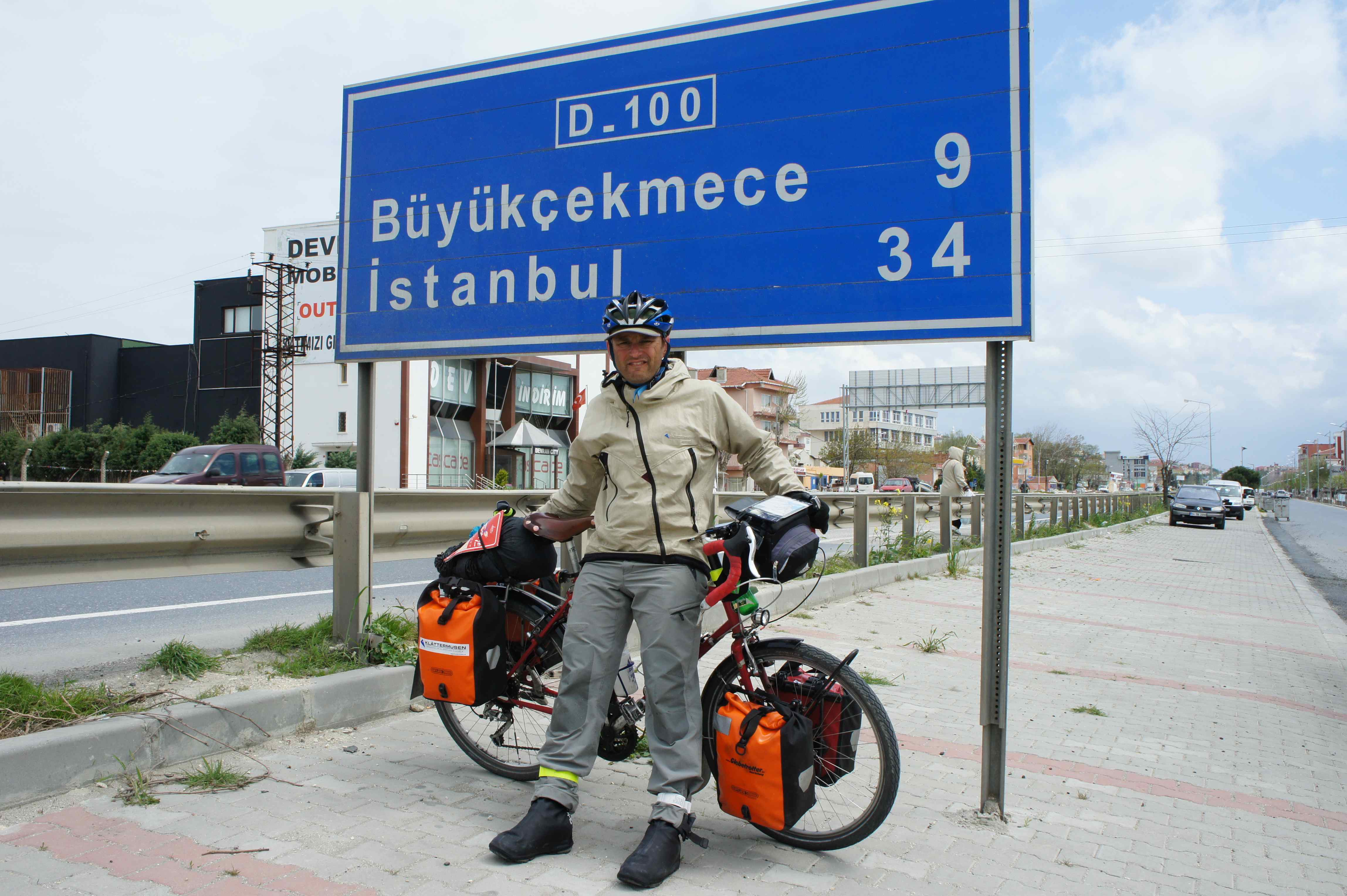 The big road to the left and the local parallell road to the right. Never has 34 km felt that long.

At that time we felt that we should have woken up already at 4 AM and started cycling at 5.30 instead in order to be sure to make it into town before darkness fell.

The surrounding traffic was so loud so it was difficult to communicate. Wej rode behind and used her mirror to check if any large vehicle was approaching too close. Whenever she discovered anything she blew her whistle to warn me. My job was to navigate on the gravel shoulder so we didn’t fall into any potholes or cut our tyres on any of the crushed bottles littering the roadside.

From time to time the shoulder was paved again and we could increase the speed and whenever we passed by some town or suburb we cycled on the parallell local road in order to avoid the busy big main road. Being able to ride on a paved shoulder and on those local roads allowed us to get some brief relief from the 10000% concentration that we needed to muster when riding on the big road.

Altitude profile of the ride into Istanbul. Note the hill after 75 km.

After 75 km we saw it towering in front of us…. We were rolling downhill on the highway when we saw a suburb with the size of a small city climbing on a huge hill. The town was split in two halves by the road we were riding on. We were informed about this climb that started from sea level and ended at an altitude of 200 meters above the sea level. From a climbing perspective 200 vertical meters is not anything special, but after riding for 75 km whereof 50 km was with headwind and on an extremely busy road and sometimes on the gravel track beside, we felt a lot of stress. We had also read in internet forums that there was no parallell local road to it so we approached the climb with extreme respect and cautiousness.

The neverending traffic passed by on our left side while there was an steel rail as a fence our our right side. We didn’t want to go too close to the traffic, but neither go too close to the railings either and run the risk of any of our panniers touching it and causing us too loose balance. We rode very slowly and careful and after having climbed 50 vertical meters there was an opening to a local road. This was in contradiction to what we had read but after a quick look on the GPS it seemed like we would be able to do a large part of the climb on the local parallell road.

Once we were off the highway it was just like any other climb, but immediately before the top of the hill we had to go back to on to the highway and on the top of the hill the road split like a Y. Both our map and GPS told us that we needed to go to the left, but how to cross such a huge road when cars come at high speed all the time? It seemed impossible for us to take the road to the left and we decided to take the road to the right instead and hope that we could get back on track at a safer place.

Now we were in the outskirts of metropolitan Istanbul and traffic was just like Bangkok. Intense, numerous, fast and drivers not used to bicycles. Forbidden or not, but as soon we saw a pavement we went up to cycle on it. I think we cycled 20 km on suburbian Istanbul’s pavements, passing crowded bus stops, low hanging signs or billboards, water posts and big poles that made the passages narrow. Sometimes we had to ride on the big road, but it worked well. 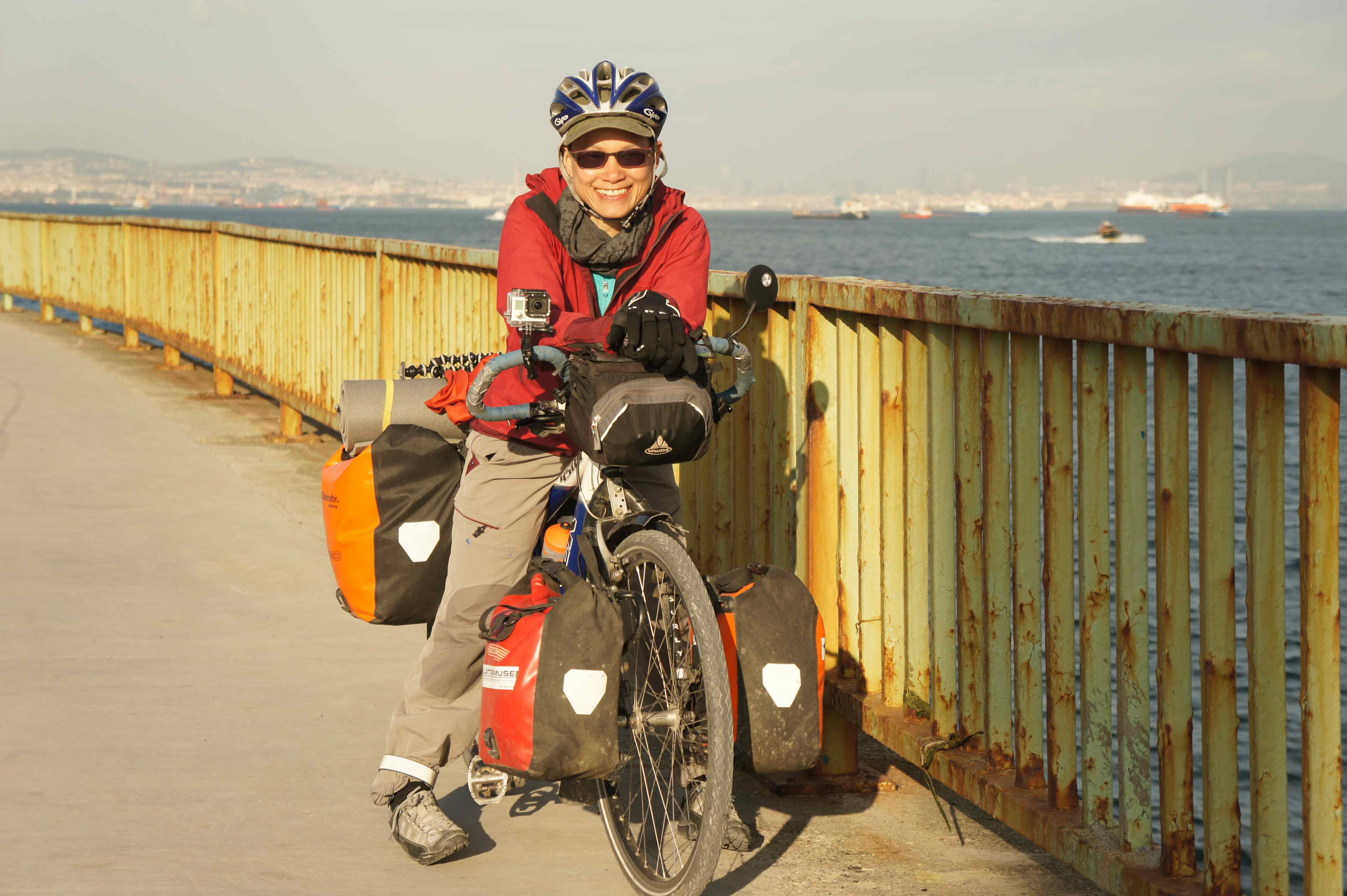 Finally in central Istanbul. Only 2 km to go through the hotel

We knew the airport were 14 km from our hotel and the aircraft we saw flying in looked bigger and bigger so we made a steady progress in our approach of the city. A few kilometers before the airport we came to a sign saying ”Beach road” or something similar. It pointed to the right while the big road continued to the left. We turned right and the heavy traffic immediately disappeared. The beach road was a normal road along the Marmara Sea and the traffic was not intense at all. Soon we passed the airport and then the kilometers started to pass by a lot quicker. When 9 km remained there was even a cycling path along the shore and we could enter central Istanbul cycling side by side talking to each other.

Our friend Gökhan who lives in Istanbul and who visited us during his cycling trip in Sweden in November (!!!) last year had helped us to book a hotel. We entered the hotel’s address in our navigator, left the cycling path and threw ourselves into the messy traffic in old Istanbul. At that point of time I was glad for having cycled a lot in Bangkok because cycling in Istanbul traffic was very much like cycling in Bangkok. The only difference was that Istanbul has steep hills while Bangkok is dead flat.

After arriving to our hotel we could finally take a deep breath and say to each other:

The ride was only 115 km which is a normal distance, but the traffic situation had caused our minds to be on full alert the entire day and when the tension subsided we felt completely exhausted physically as well as mentally. We were happy to have been able to safely ride into Istanbul and thereby conclude the first segment of the journey to Bangkok, but we felt too tired and almost empty inside to go out and celebrate it. After a quick shower, we went down to the first kebab/döner eatery we could find, ordered something quick and went back to our room to sleep. 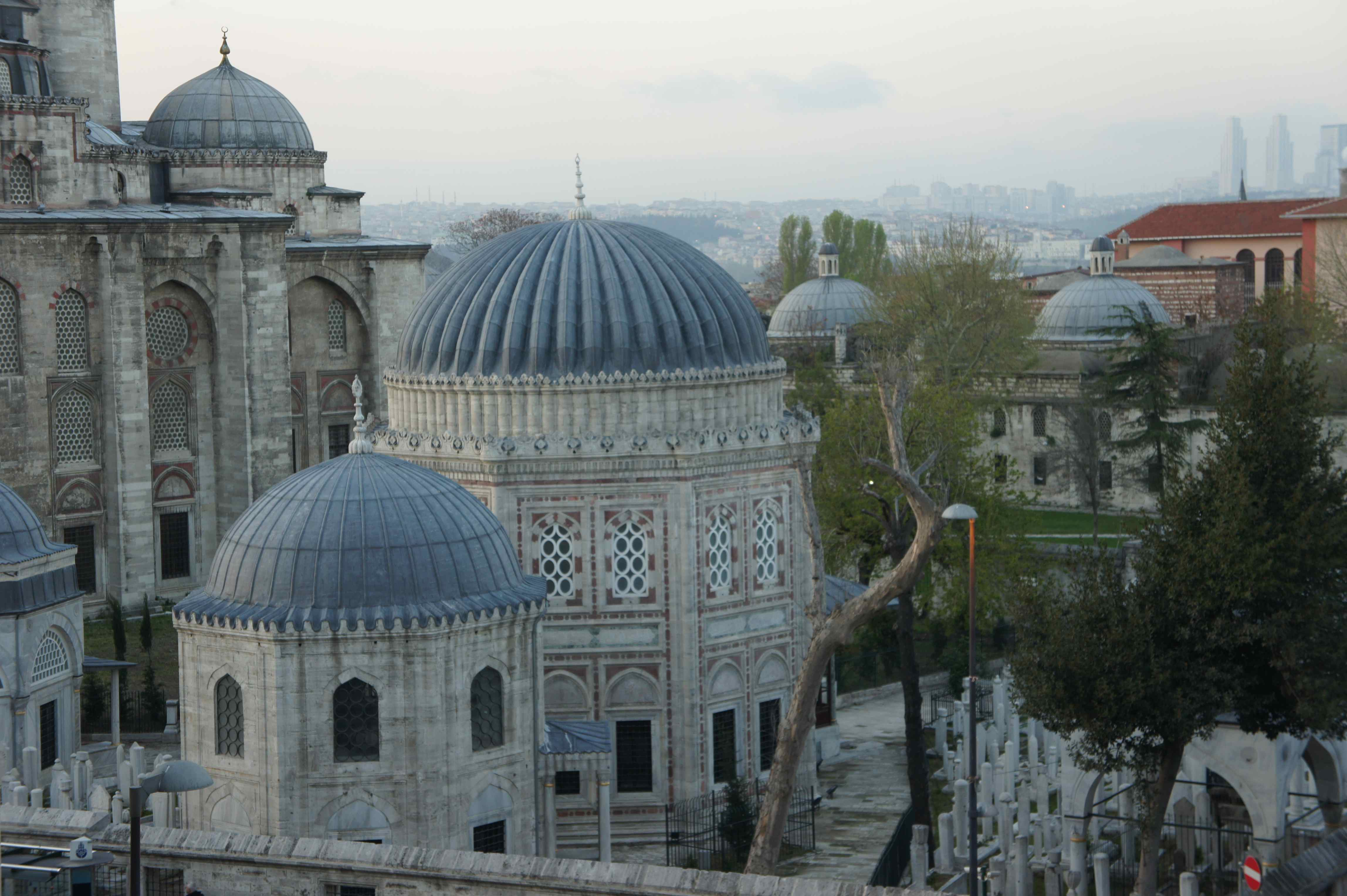 View over the great Şehzade Mosque from our balcony