A trip like this will take us both through populated areas with easy access to well stocked bike shops and through less developed or unpopulated areas where the supply of spare parts is close to zero.

When planning the trip we have carefully gone through what tools and spareparts to take along. We obviously carry spares for things that are very likely to break such as innertubes, brake cables and pads. Apart from that we have also decided to bring spares for items that although they are not likely to break, will cause a major problem if the really do break and are not heavy or bulky. Examples of such items are spokes, pannier hooks and derailleur hangers (swedish: växelöra). 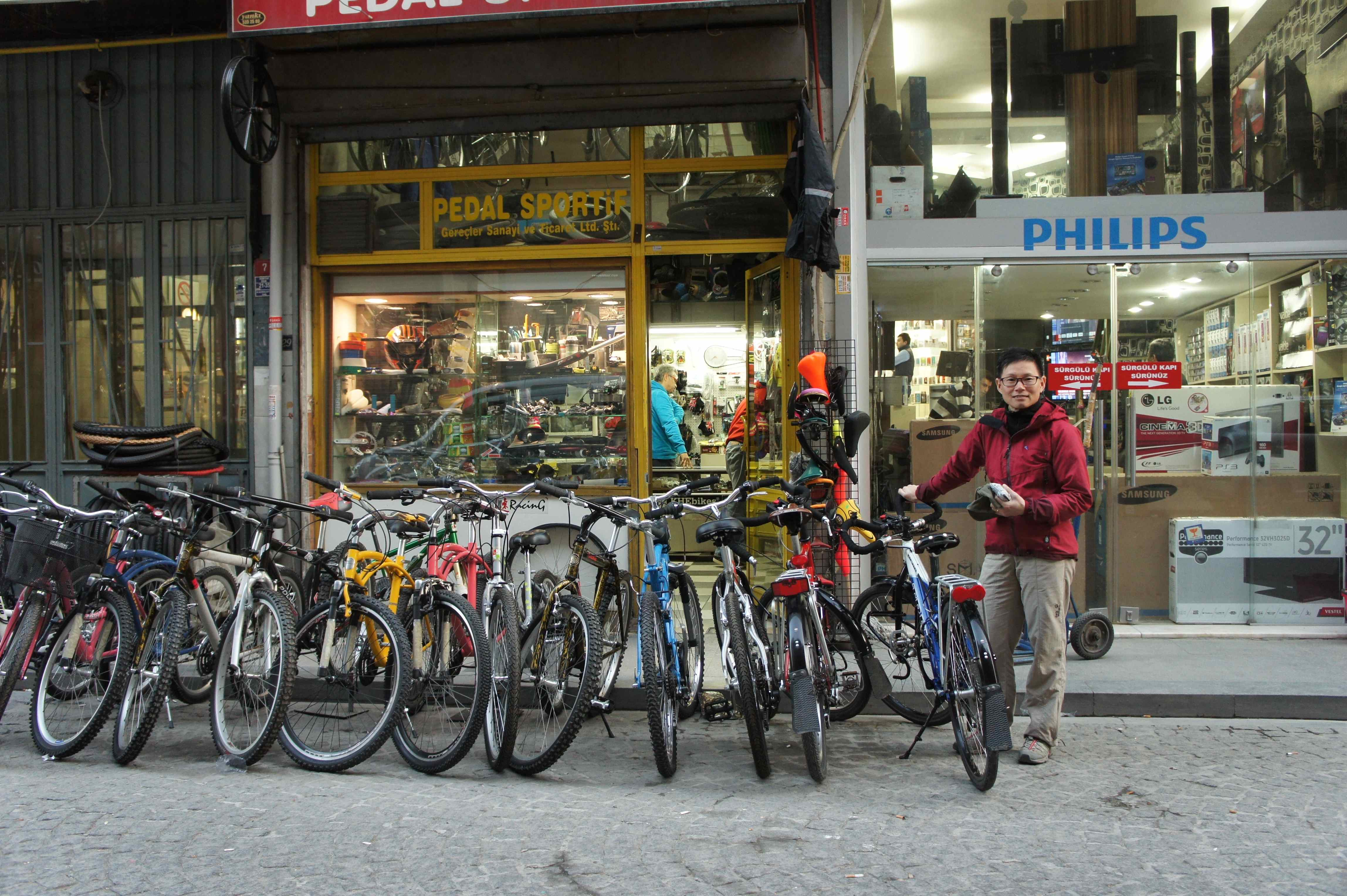 Outside the bike shop

A few parts on a bike are expected to last very long, require special tools for mounting and are either bulky or heavy to carry. We have decided to not carry spares for them and if they break it will be a showstopper. The perfect example of such a part is the bottom bracket (swedish: vevlager). To reduce the risk for any problems both bikes got new bottom brackets before we started.

A week ago when still in Bulgaria we cycled on a countryside road where the surface suddenly changed from asphalt to cobble stone right in the middle of nowhere. All cyclists hate cobble stone as it is truly unpleasant to ride on. After a couple of kilometers, the surface changed back to asphalt. I got happy again while Wej got very concerned since her bike had started to make an unfamiliar noise.

It was a rattleing noise that appeared for every turn of her cranks. First we suspected the vibrations on the cobble stones had moved her front derailleur slightly causing it to touch the chain. We checked the chain line, but no – that could possibly not be the problem. We continued to cycle and tried everything we could think of until we simply gave up. 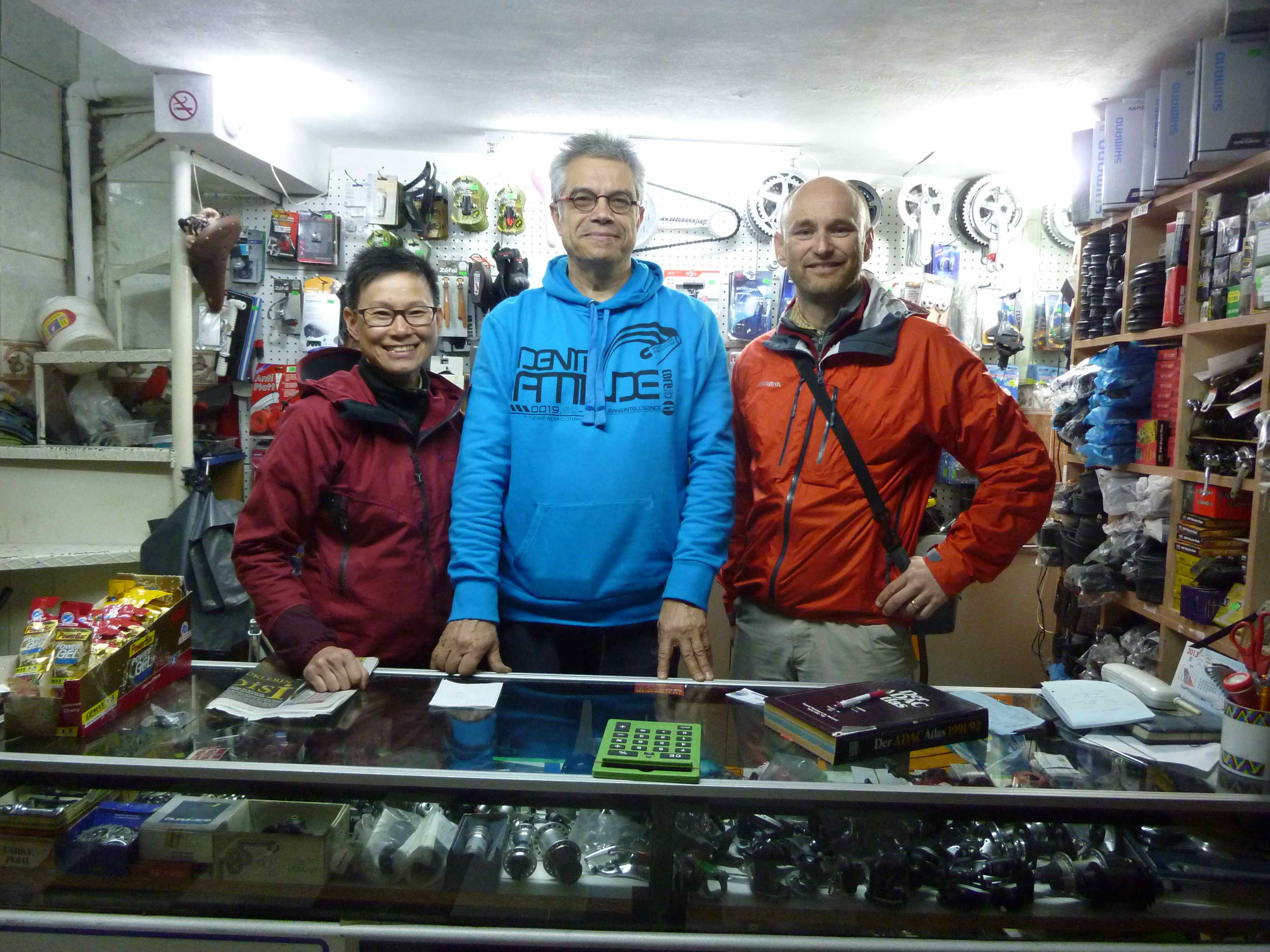 The owner Bülent in the middle

The following day we spent a rest day in the Bulgarian town Elhovo and I cleaned her drive train and changed chain. When we started to ride the day after her bike was silent and we were happy again….. for about 15 km when the got noise back.

With 300 km left to Istanbul we thought that even if it was the bottom bracket that was causing the noise it would easily last until we reached the city. Wej’s bike continued to make sounds and especially when going uphill. Knowing that there were good bike shops in Istanbul we couldn’t care less – the bikes were scheduled for a major overhaul there anyway.

The first thing to do during our first rest day was to find the bike shop our local friend Gökhan had adviced us to go to. We walked there and after getting lost in the Egyptian spice bazar (nice place to visit by the way) we found the shop not far from the Galata bridge.

The shop was small but we immediately saw it was filled with high grade cycle parts and when we sat down to talk to the owner Bülent he told us he used to be a mechanic for the Turkish national cycling team. All this seemed very promising and Bülent offered us a total service for a very reasonable price. The service included cleaning the bikes and the drive trains, opening up all the hubs to clean and grease the bearings, taking out and inspecting the bottom brackets and adjusting things that needed to be adjusted. 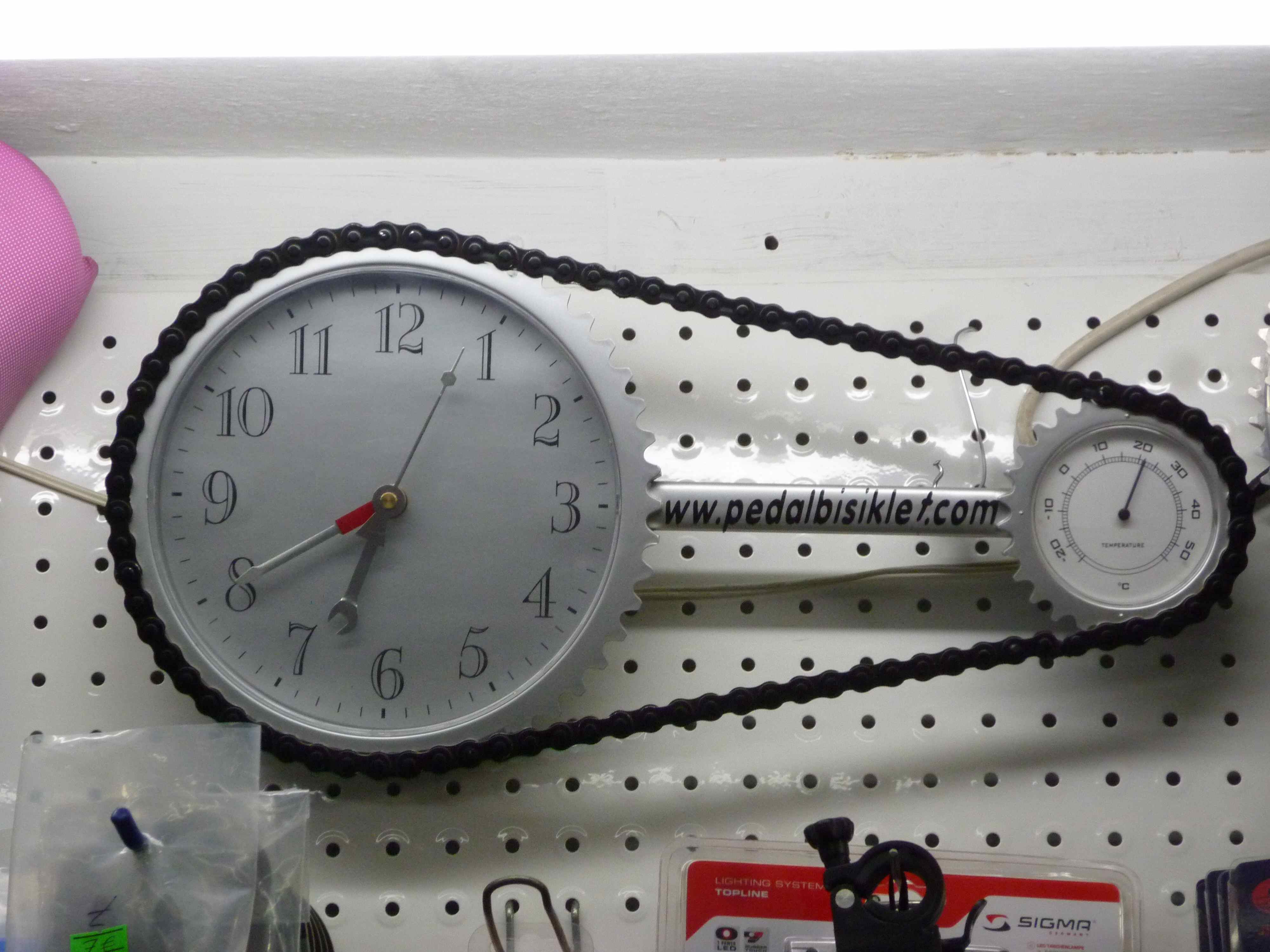 Any genuine bike shop should have a clock like this 🙂

I have a dynamo hub and before we left I bought a transformer that when connected to the the hub will provide 5 volt in a USB outlet that we can use to charge our cameras and GPS. We left our home in a rush and I had no time to mount it and since special tools are required I have kept it until it was time for service. I showed it to Bülent who immediately replied:

– ”power plug – that is a simple thing to mount”

When we returned the following day, the bikes and drive trains were shining, our handle bars had new tape and my bike had the 5 volt USB outlet mounted on the stem. Best of all is that the noise from Wejs bike is gone. Bülent said the bottom bracket looked good but some dirt probably had god in and caused the noise. He also mentioned that he has good contacts with bike shops throughout Turkey and if there is any problem along the way we should contact him and he will direct us to the closest one.

For other touring cyclists who go to Istanbul and need to get to a good bike shop we can recommend the one we used. The contact details are as follows: