We are now in the ancient silk road city of Khiva in Uzbekistan. From the Aktau to the town of Beyneu in Kazakstan it was 500 km cycling thorugh the desert and from Beyneu to Khiva it has been another 700 km mainly through desert.

We have passed some small town and villages on our way here. Some of them have been in the middle of the desert and with a seriously poor road leading to them and with at least 100 km to the next similar settlement.

In these villages/towns there are activities going on. Kids go to school and adults are busy doing their chores, but the contact with the surrounding world must be minimal and I wonder what they do a Saturday night in for example a little town like Shetpe. There can’t be much entertainment in town and the distance to the next town and the condition of the road makes it difficult to go there. Eventhough I grew up in a small place in Sweden I think I had way better opportunities to interact with people outside my village than the people in these towns and I every time I have visited these small desert towns I get more and more happy that my Mum and Dad didn’t bring me up in a burning hot and sandy town far far far from the rest of the world. 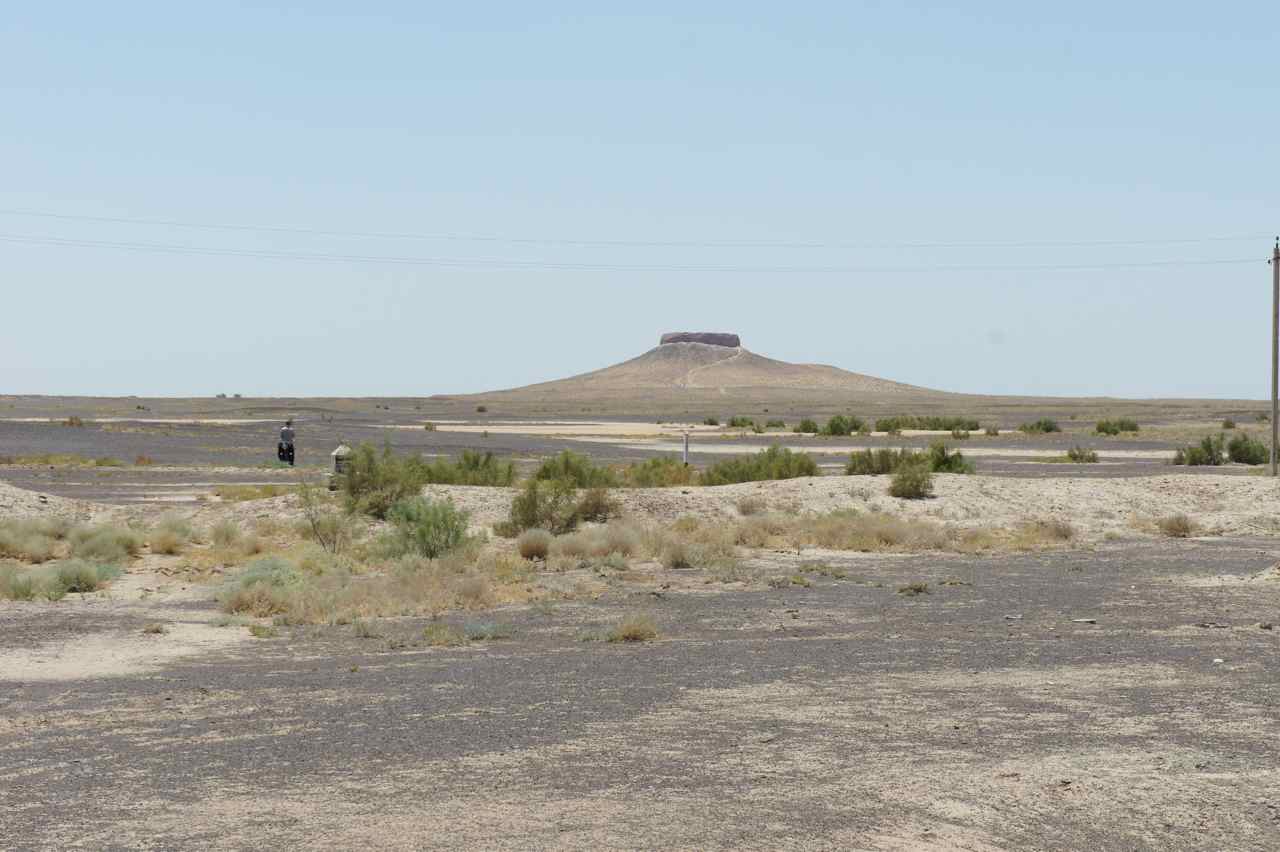 Ancient fortress on top of a hill in Uzbekistan

Beyneu was the first decent sized town we came to and even that was a town which felt far from the rest of the world, but it had something that we enjoyed highly – running water. We are so used to get as much water as we please from our taps and maybe it takes a tour through the desert and taking care of the daily hygien with less than a liter to understand how precious water really is. 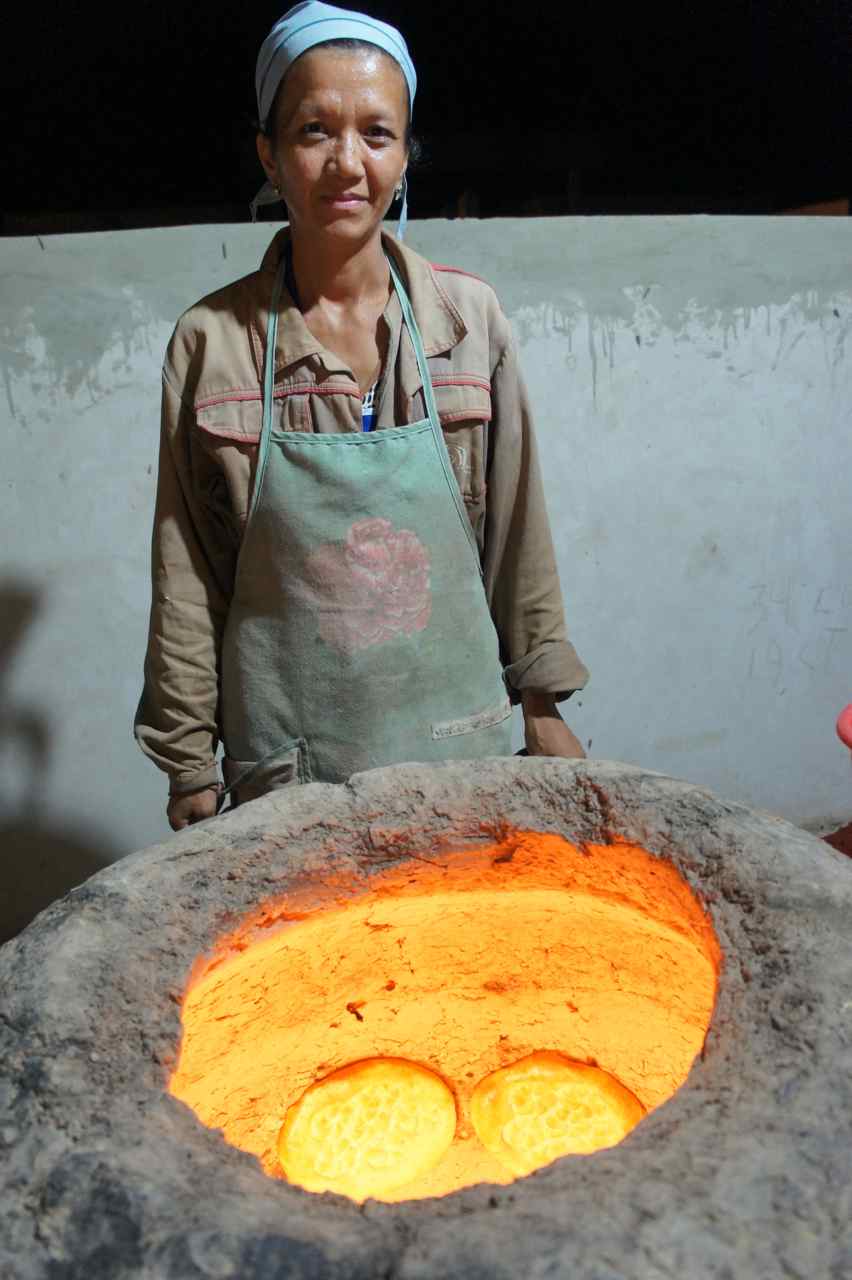 We spent a day in the not very bustling city of Beyneu by taking care of things needed to be taken care of and that was washing, cleaning bikes, blogging and sleeping. We also visited the local market where we bought a footprint for our tent…. 🙂 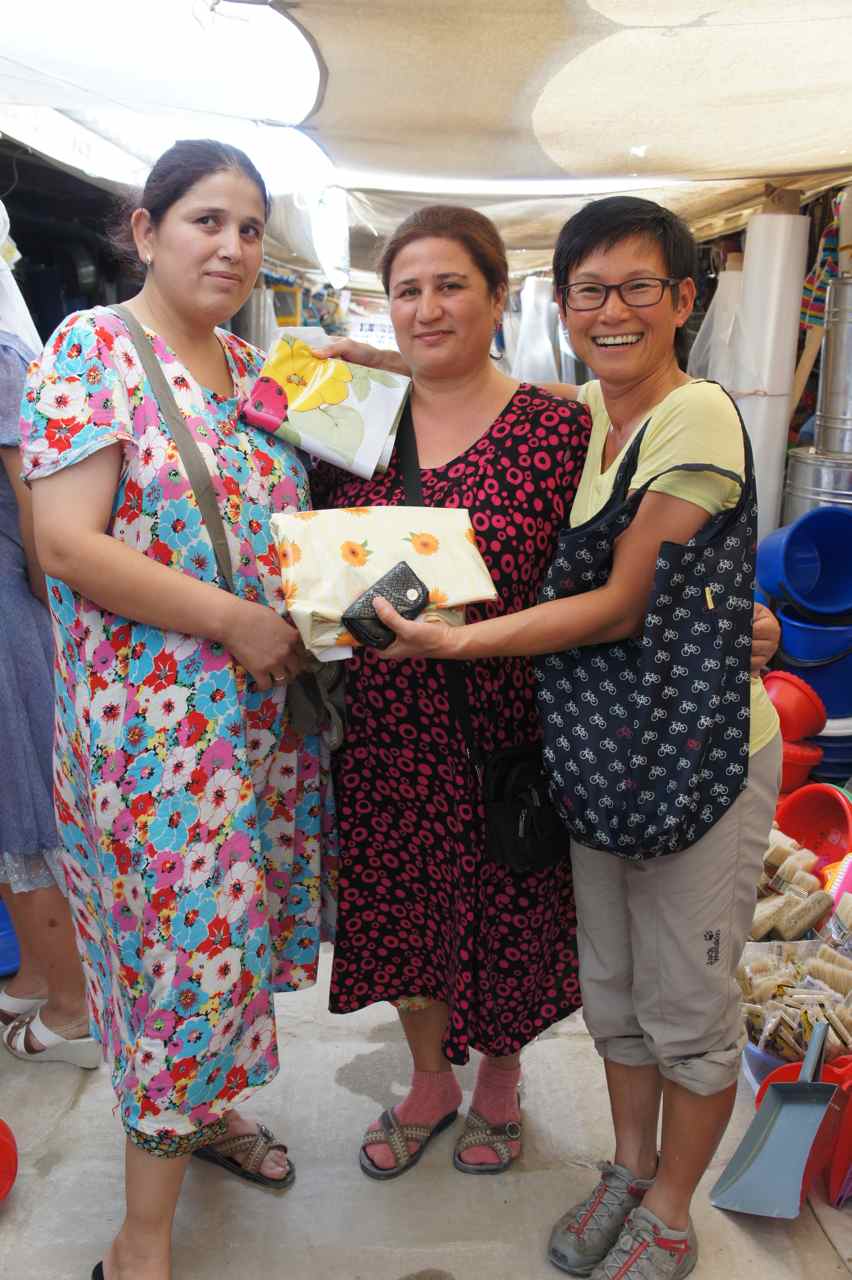 Well, it is actually not a real footprint but an oilcloth with a pattern of ladybugs that will provide extra protection from the nasty thorns that could otherwise penetrate the floor of our tent.

From Beyneu it was about 90 km to the Uzbek border. We didn’t intend to cross the border the same day so we started a bit late. The road towards the border is gravel and full of pot holes. Knowing it would be a race once in Uzbekistan we cycled slowly and went in to one of those little desert villages to buy some cold drinks to our lunch. I must say it again – it can’t be fun to grow up in the middle of the desert and the nearest town is a town like Beyneu. 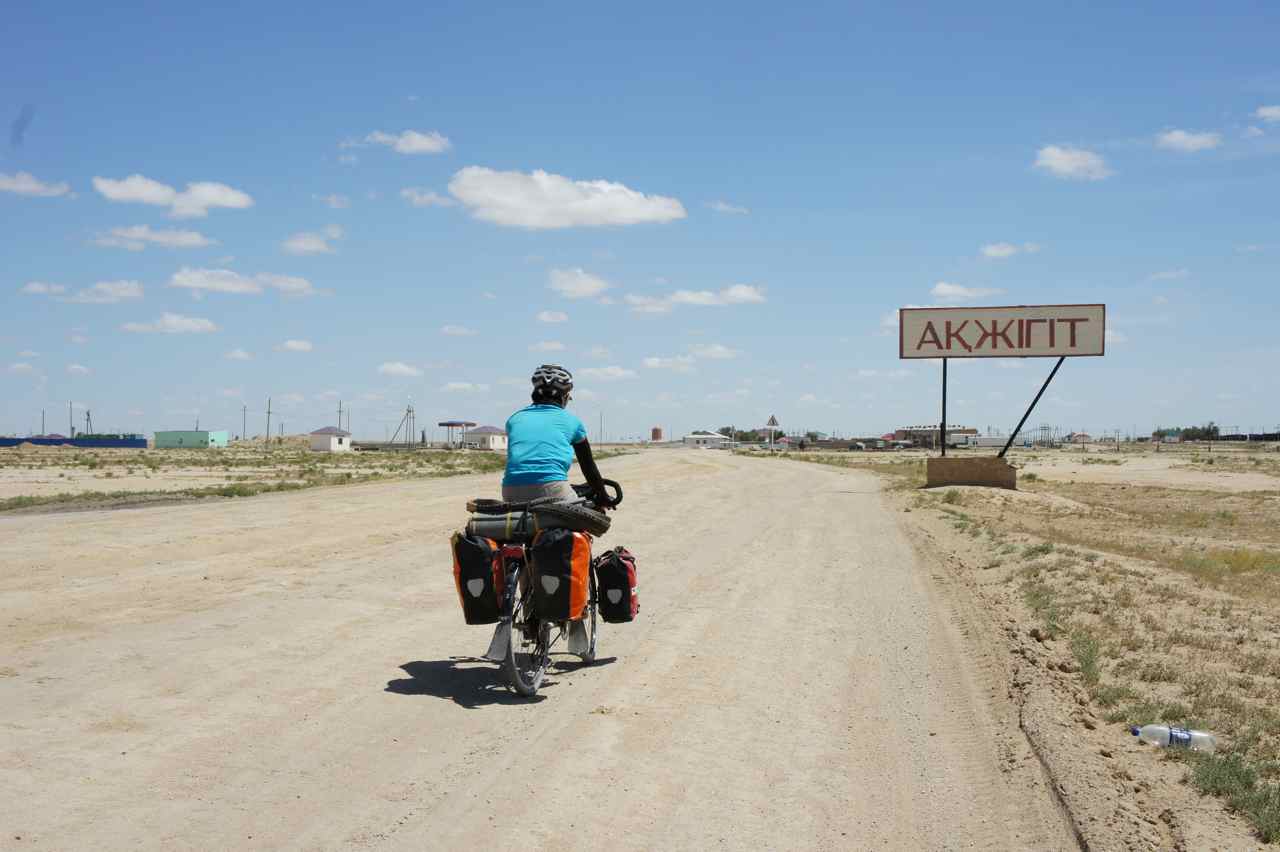 We stopped 6 km short of the border to Uzbekistan. The reason for this was that Uzbekistan has a system where foreign tourists have to register at a hotel at least every third day. It is 430 km from the border to the nearest hotel and therefore our intention was to enter early in the morning and then go as far as we could that day.

We had learned that the border passage was open 24 hours, but when we arrived at 7.30 we found out that it actually was closed for a shift change between 7-9. At around 9.30 we were let in to the border building and could start the customs procedure. When entering Uzbekistan one has to declare all currency, valuable items, vehicles (bicycles), medicines etc. before entering the country. We were six people in the group and it took until noon until we could start cycling.

Once inside Uzbekistan the condition of the road improved significantly. While it was a dirt road on the Kazak side it was a fine asphalt road on the Uzbek side. Sometimes the tarmac was a bit broken but for most of the time it was of good quality.

The road is straight to say the least. During our first day in Uzbekistan we cycled 110 km without making a single turn. It could have been boring but since we had a good tailwind we could cruise across the desert at good speed.

In thai the word for desert is translated as ”sea of sand” and I now I really understand why. The landscape was very flat and when turing around 360 degrees and seing nothing but a sandy horizon line it is not far away to call it ”sea of sand”. 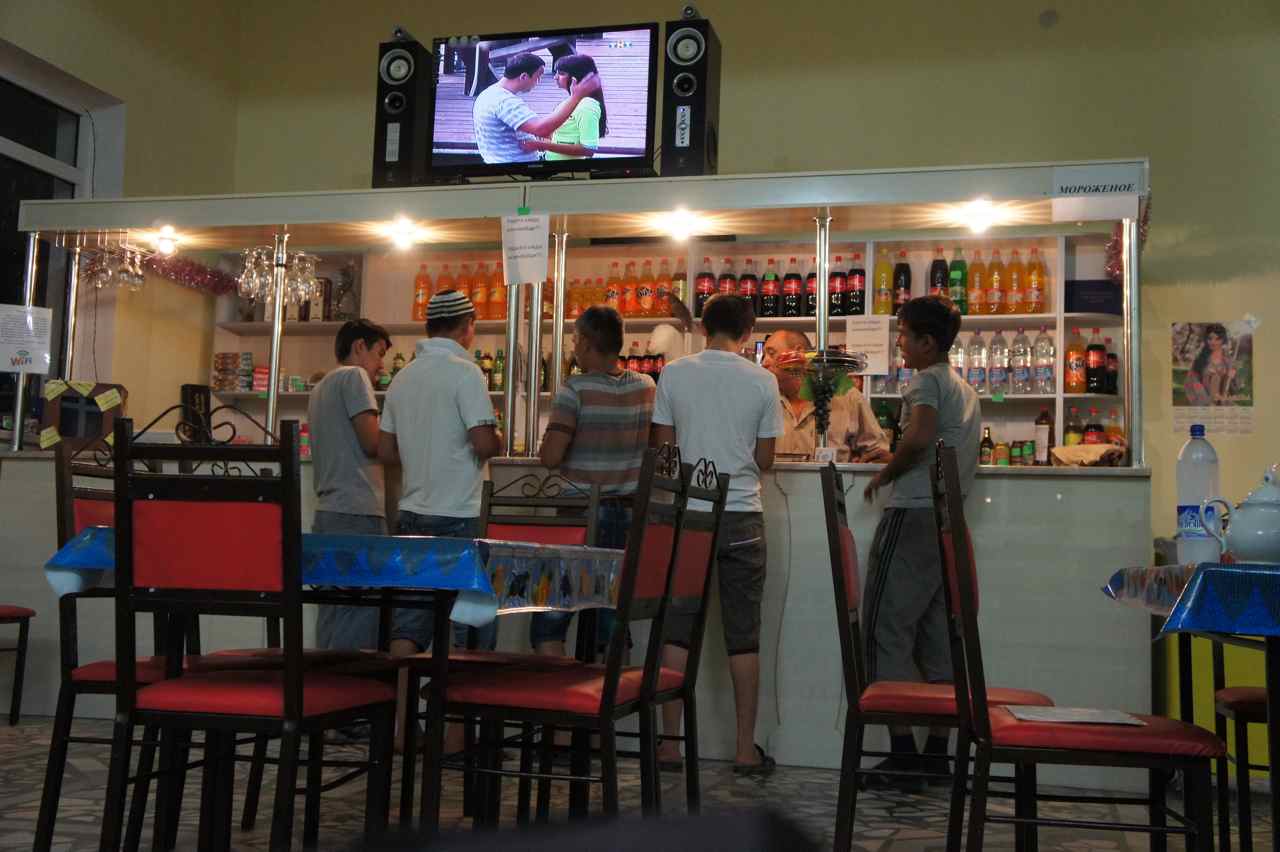 Seing a truck approaching from far away was like seeing a ship. First we saw the top of it and then after a while all of it became visable and then it took a long while until we actually met it.
This vast land of nothingness is hard to understand and I can’t really tell if I like it or not. On the bad road in Kazakstan it was a struggle to move forward and all focus was on finding a line through all the pot holes and cracks, but on the good road in Uzbekistan there was more time to look around. I wouldn’t like to live in this area but I am glad to have been able to visit it. Being in a group of friends also makes it easier, but I think I could also enjoy the solitude if we would travel without our current companions. 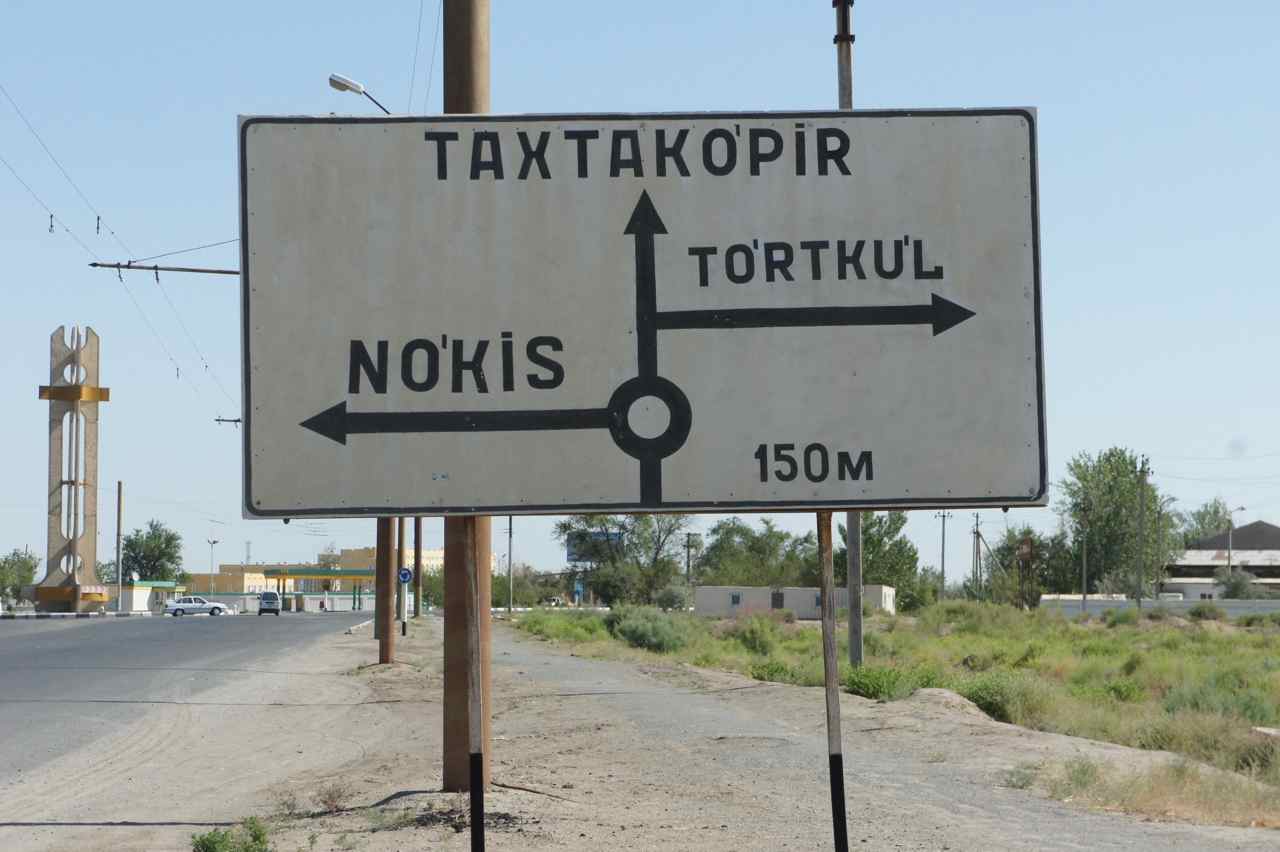 Tortkul to the right – will this be the place where will run out of toothpaste Micke???

During the second day in Uzbekistan we cycled 183 km and that is the longest I have ever cycled with a loaded touring bike. We had to make it reach Nukus in three days and decided to make use the middle day to get some extra kilometers done.

Our group is not really a group but individuals who happen to travel the same route at the same time. We cycle at different speeds and soon after we start biking we are all spread out, but we agree on where to meet around lunch and where to stop. During this long day there was a misunderstanding and half of the group went camping while our New Zealand friend and ourselves continued 2 km past the agreed camp site to a truck stop where we could enjoy a shower, food at the restaurant and sleep for free at the eating platforms outside the restaurant. After 183 km on the road it felt very good to be able to shower properly instead of doing it with 700 ml water. 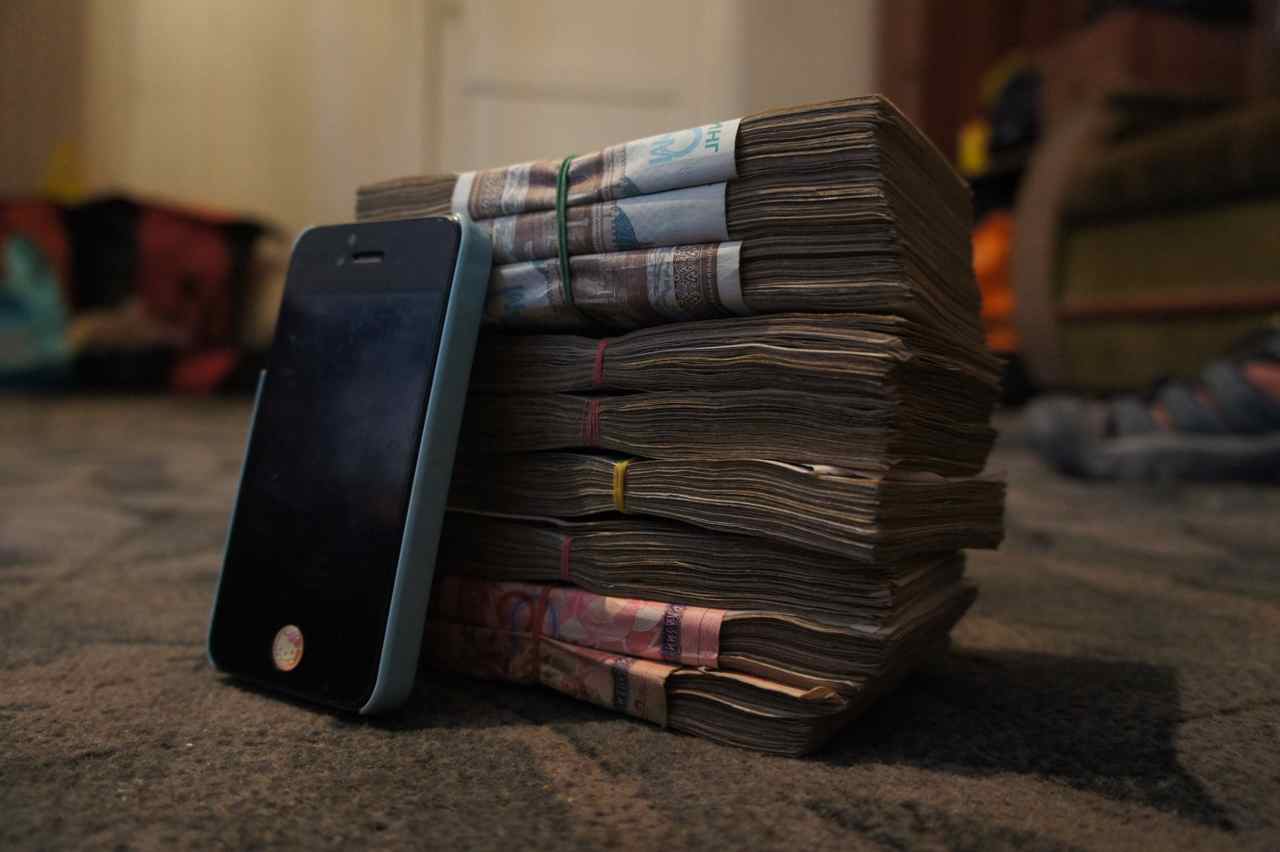 Uzbekistan has a high inflation rate and the official exchange rate is 25% below the one on the black market. This pile of money is what we got when we exchanged 300 USD

The following morning we had some 35 km to ride to Kungrad and right outside Kungrad the desert ended. It was not a gradual change, it was rather like a line in the terrain. West of that line sandy desert and east of it greenery. It is the water stolen from the Aral Sea that makes it possible to create green areas in the desert.

When we cycle in these green areas we feel like when cycling in Thailand. It is hot and a lot more humid than in the desert. Apart from the cotton fields there are lots of rice paddies and fields where vegetables are grown. At the roadside people sell water melons from small stalls and the villages are close to each other and there are a lot of people everywhere. But the greenery ends just as quickly as it starts. It is so evident that where there are no irrigation canals, there will simply be a sandy desert. 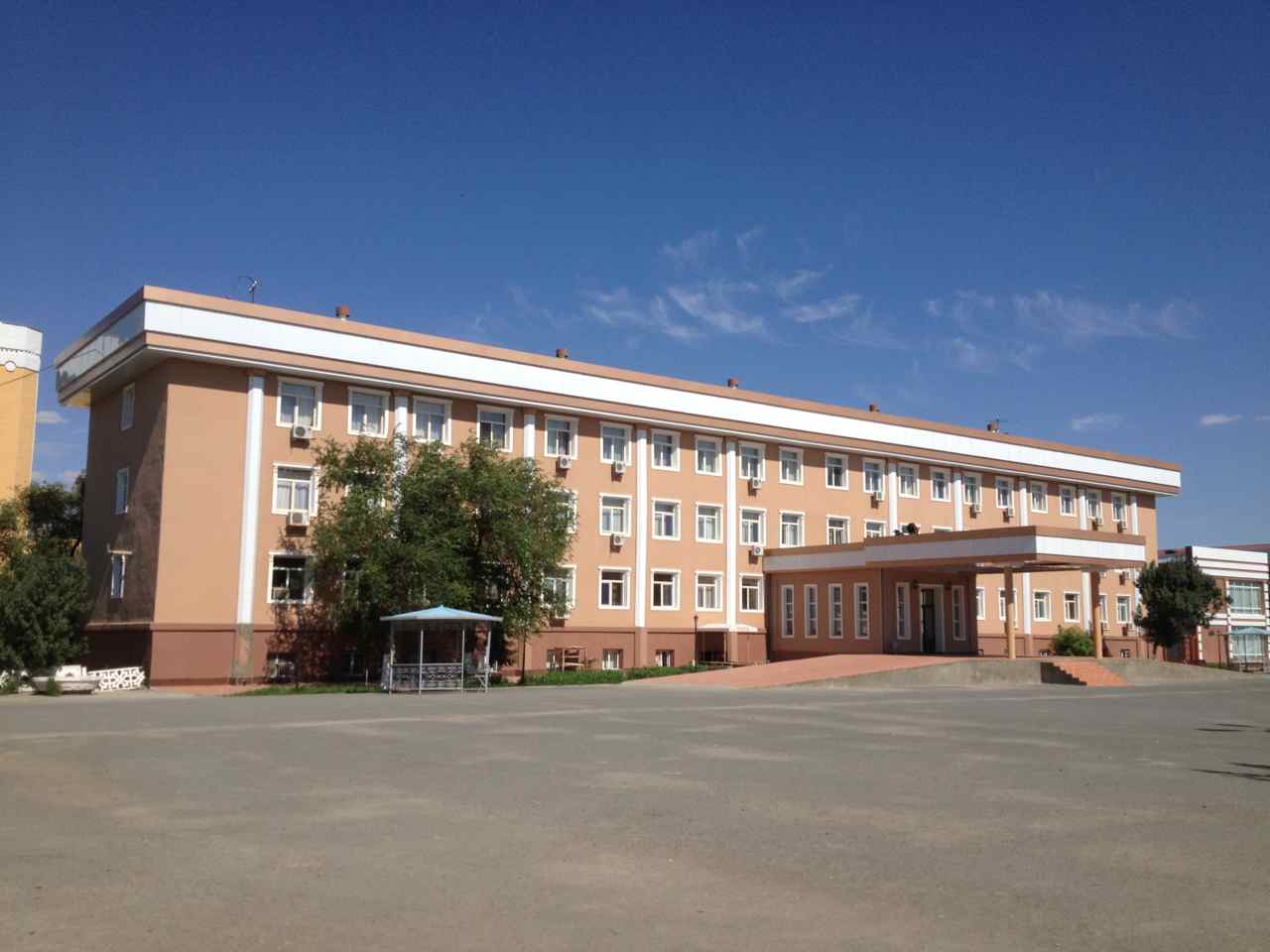 Hotel Nukus looking good from the outside…. 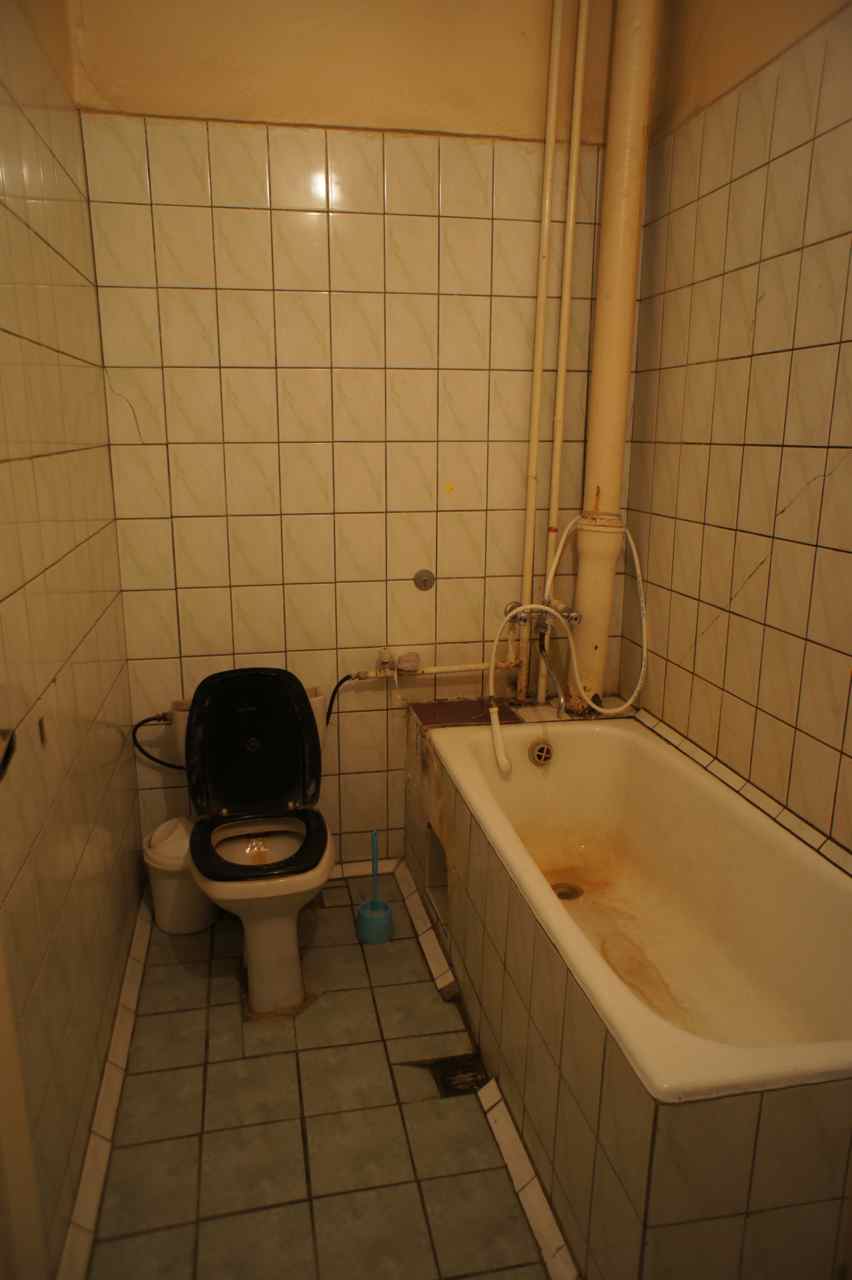 But not as good on the inside….

Arriving at Nukus we checked in at the cheapest hotel in town. It looked good from the outside, but the interior certainly had seen better days. Everything was in desperate need of repair and the 12 dollars per night each of us paid felt like a bit to much for what we got. Personally I would have prefered to stay at place like the truck stop last night, but we had to stay at the hotel to get the registration. 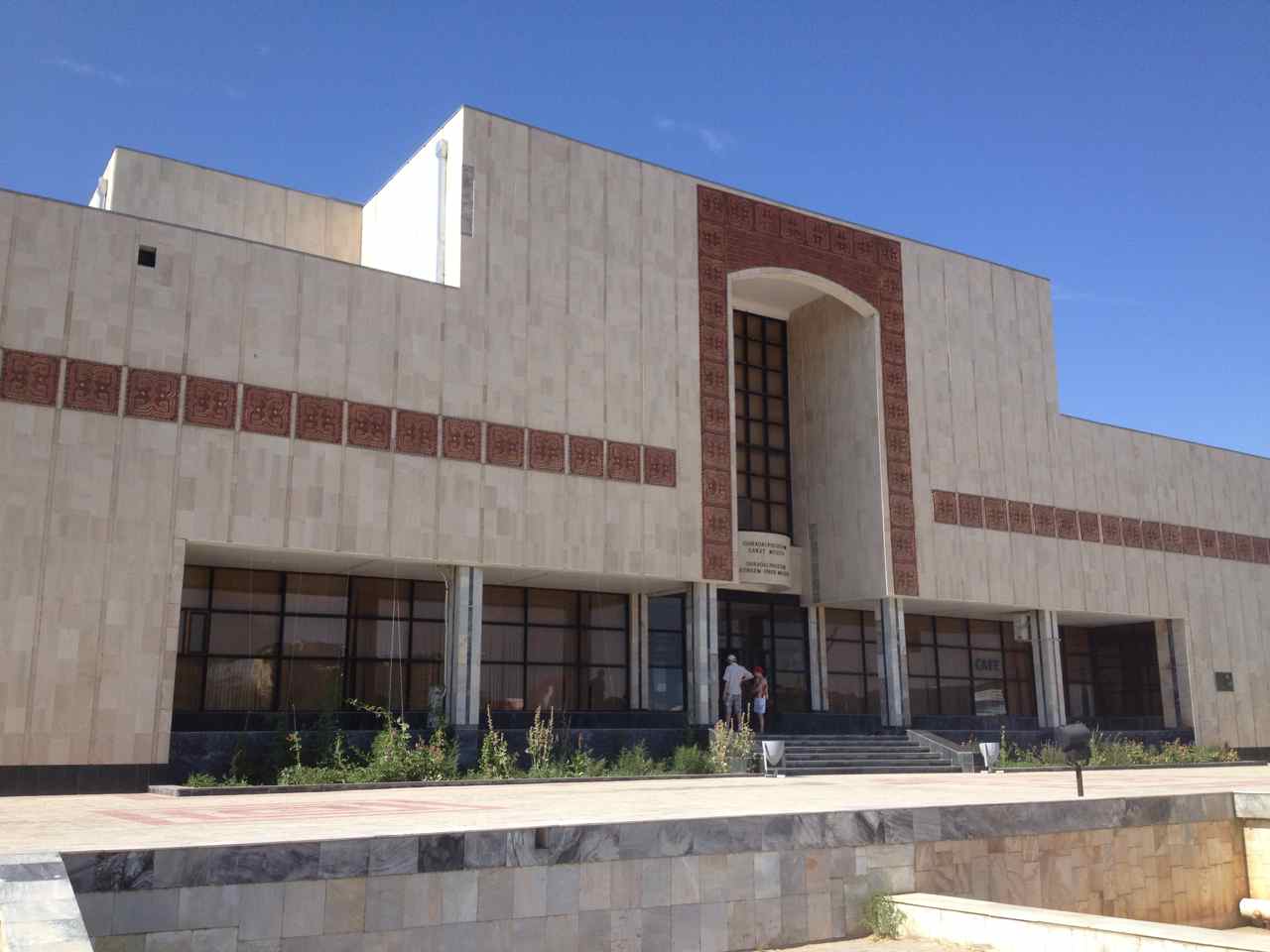 Nukus has one attraction and that is Igor Savitsky’s art museum. Savitsky was an artist from Moscow who settled down in Nukus and started to collect avant garde art from all corners of the Soviet union. The Kremlin knew about this, but since it was so far off from everything they let him do it and now his museum is the place to visit if one wants to see the art from artists who didn’t follow the communist art style. 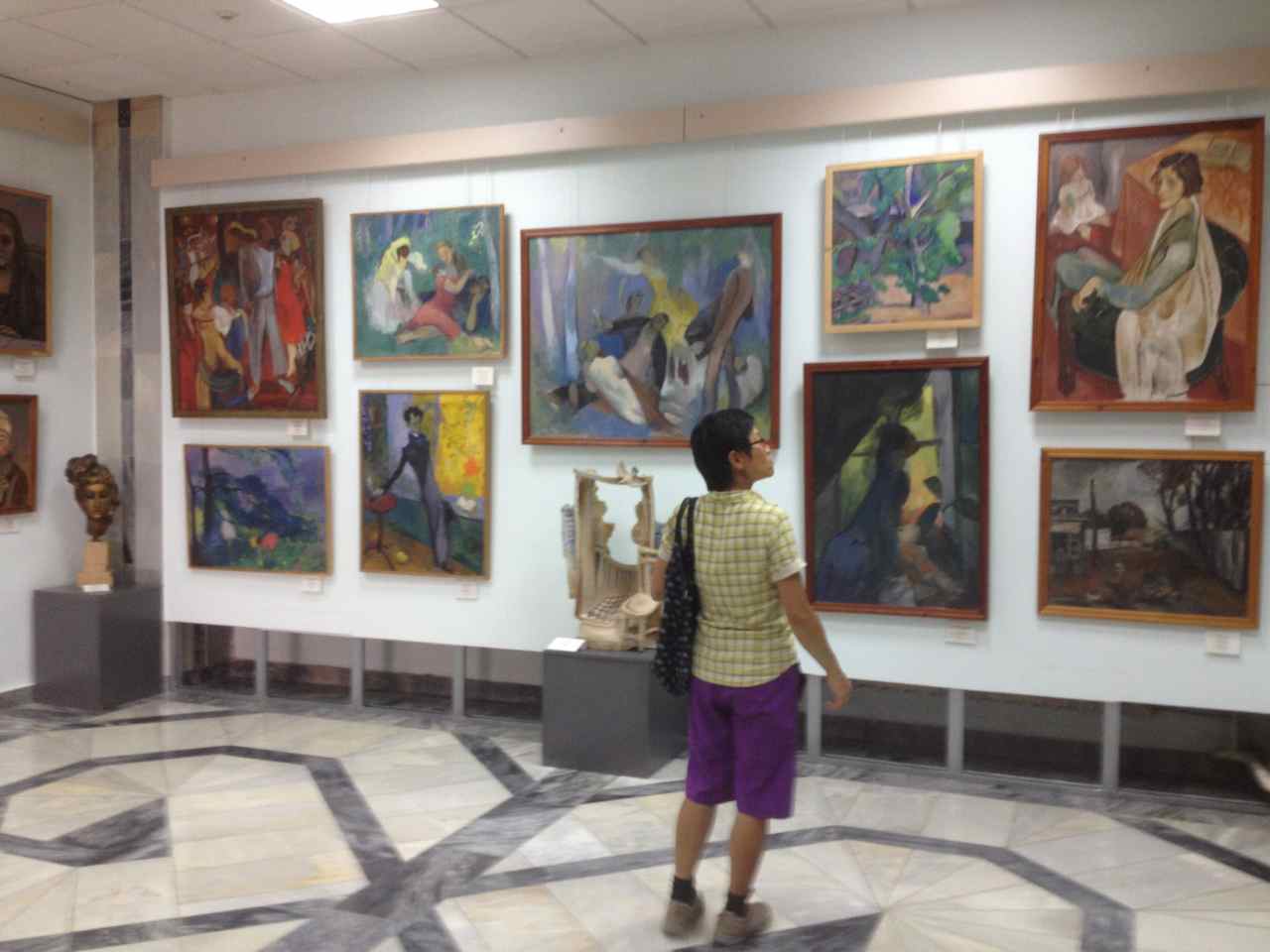 Enjoying soviet modern art in the midst of the desert

It took us two days to cycle from Nukus to the ancient silk road town of Khiva where we are right now. Khiva’s old city is just wonderful and not until we arrived here did we really get the feeling that we are traveling along the classic silk road. Take a look at the post Wej just made (in thai) and you will see some pictures of the old town in Khiva.

Tomorrow we will set out for the four day ride to Bukhara which is the next classic town on the silk road. 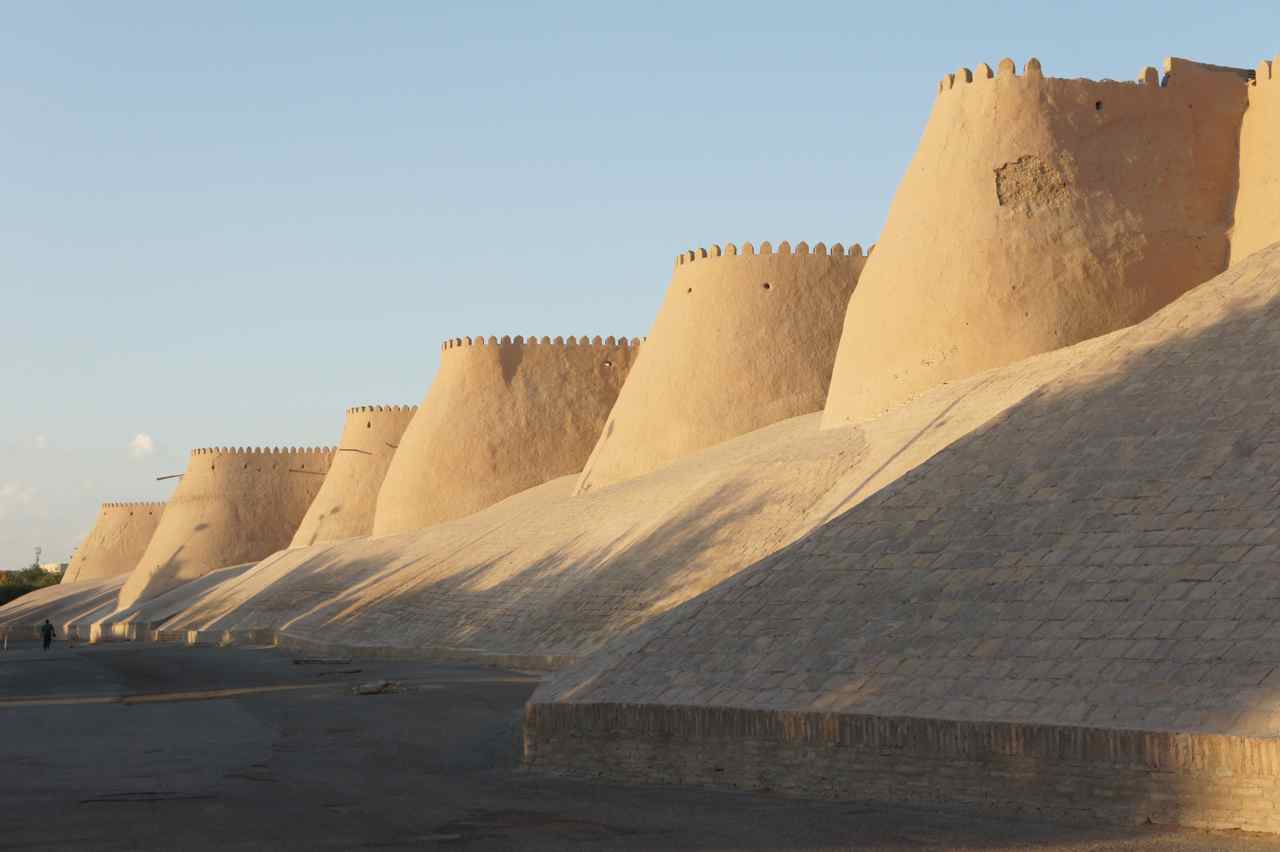 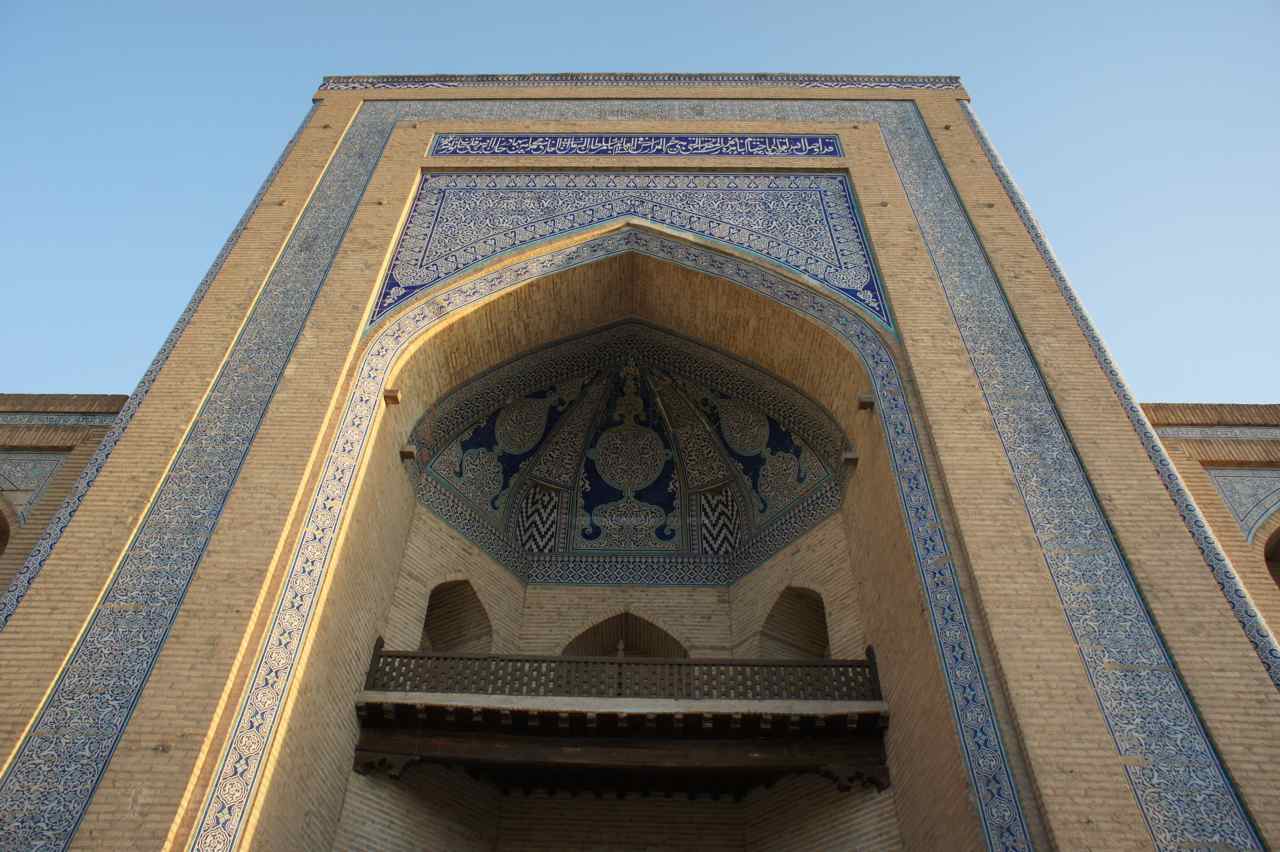 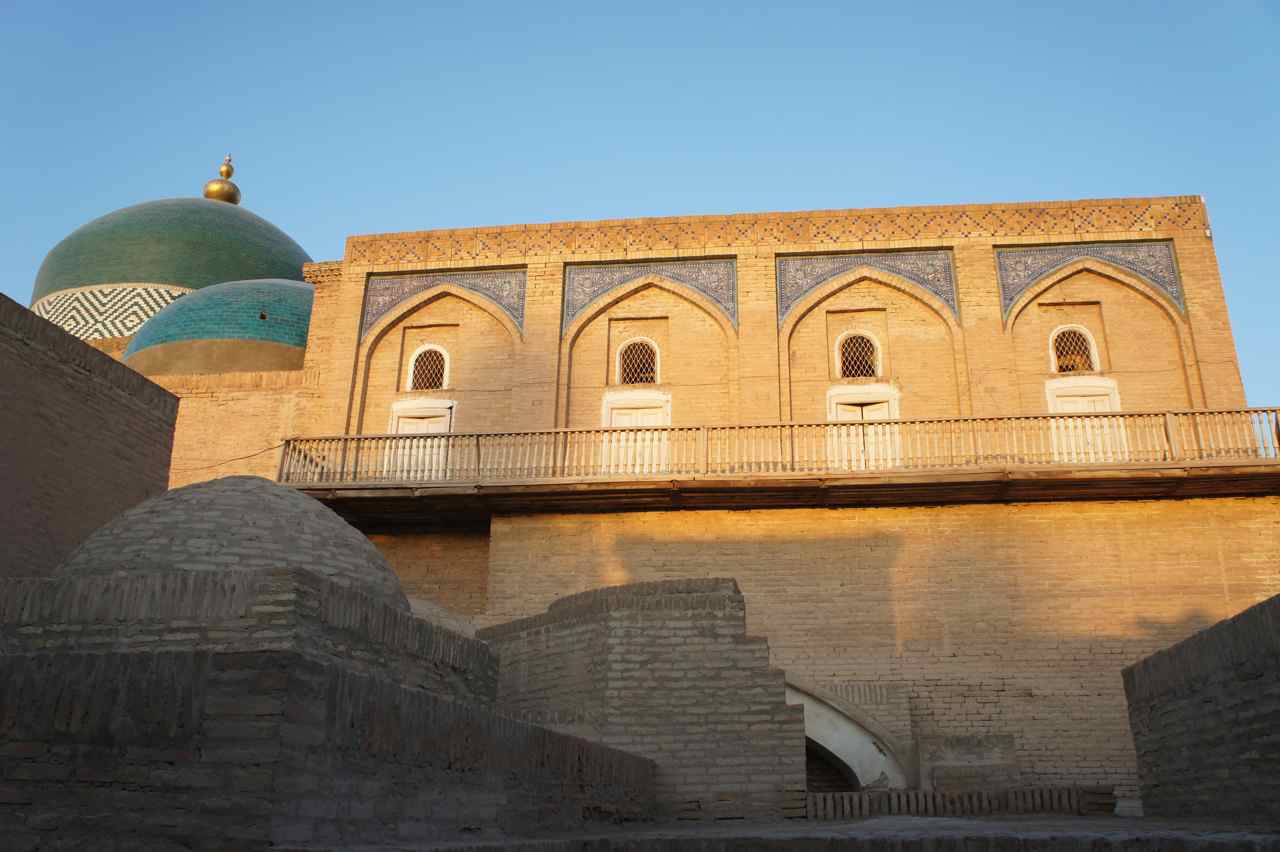