We knew already yesterday night we would not cycle far today. When we woke up our legs were stiff from yesterday’s extra long day in the saddle. We didn’t want to have a speedy morning and rush out of town. Instead we had a long breakfast and didn’t start to cycle until 11 and then we went into the city centre to do some sightseeing from our saddles. 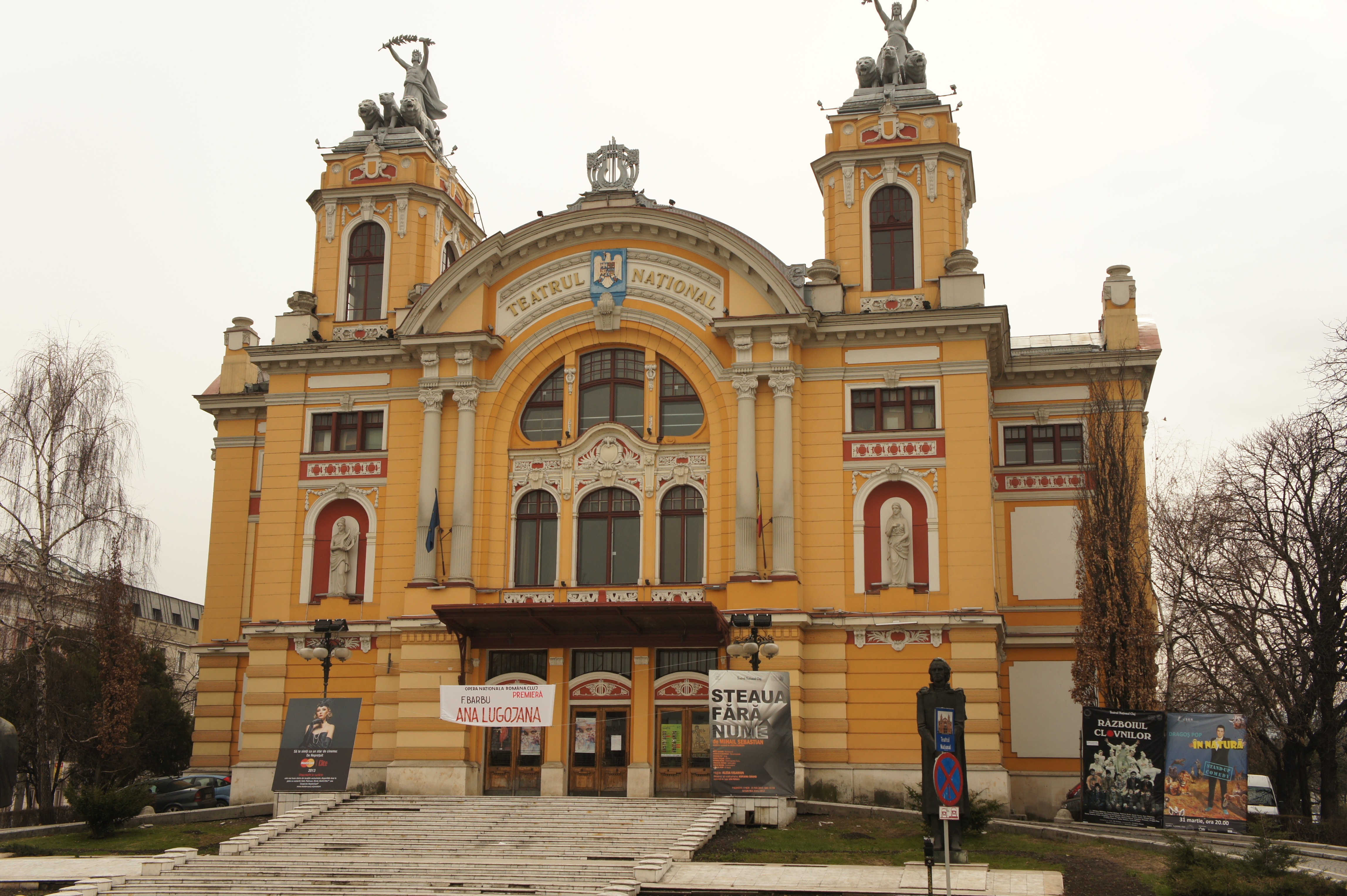 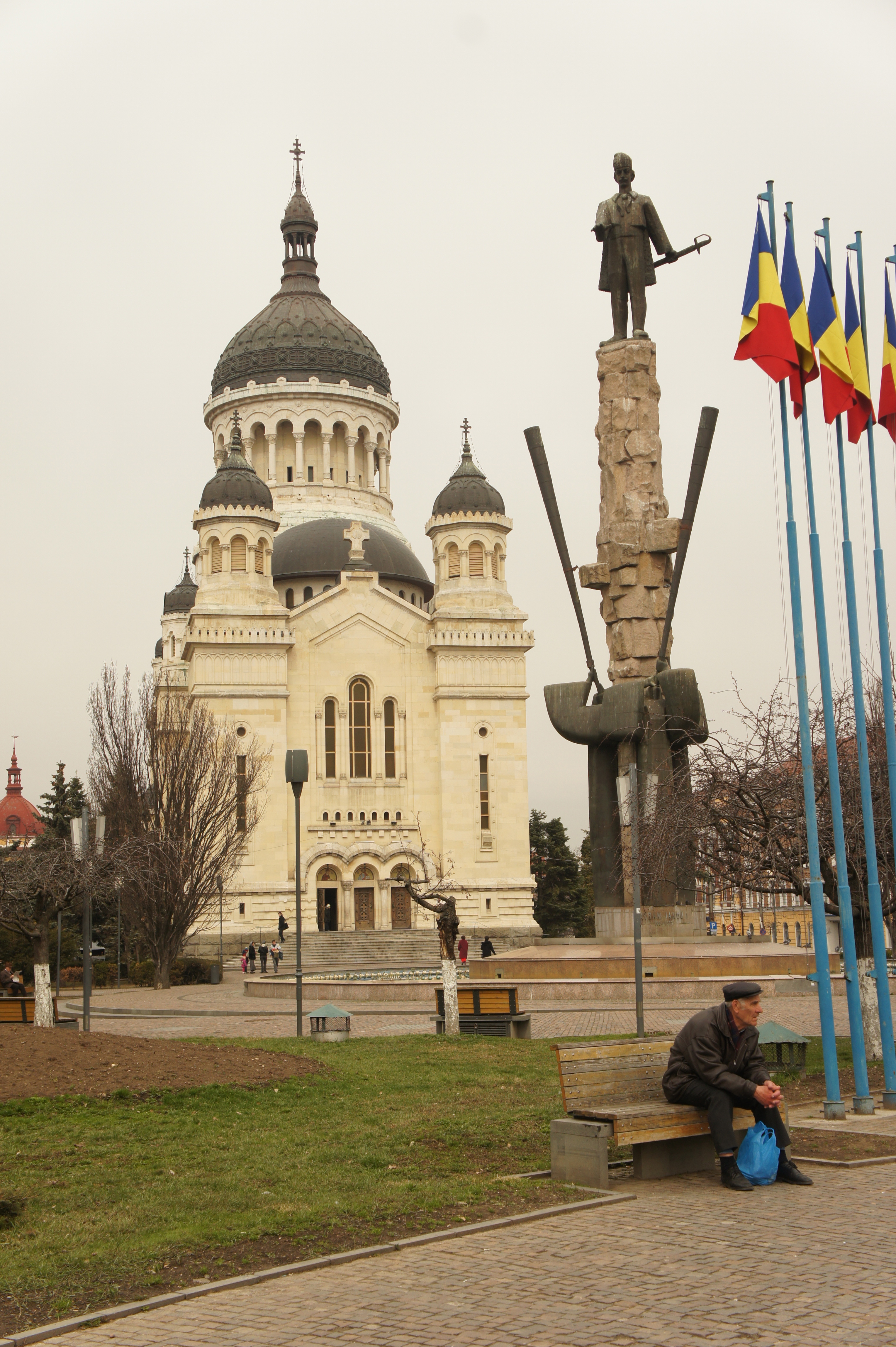 The Orthodox Church in the city centre 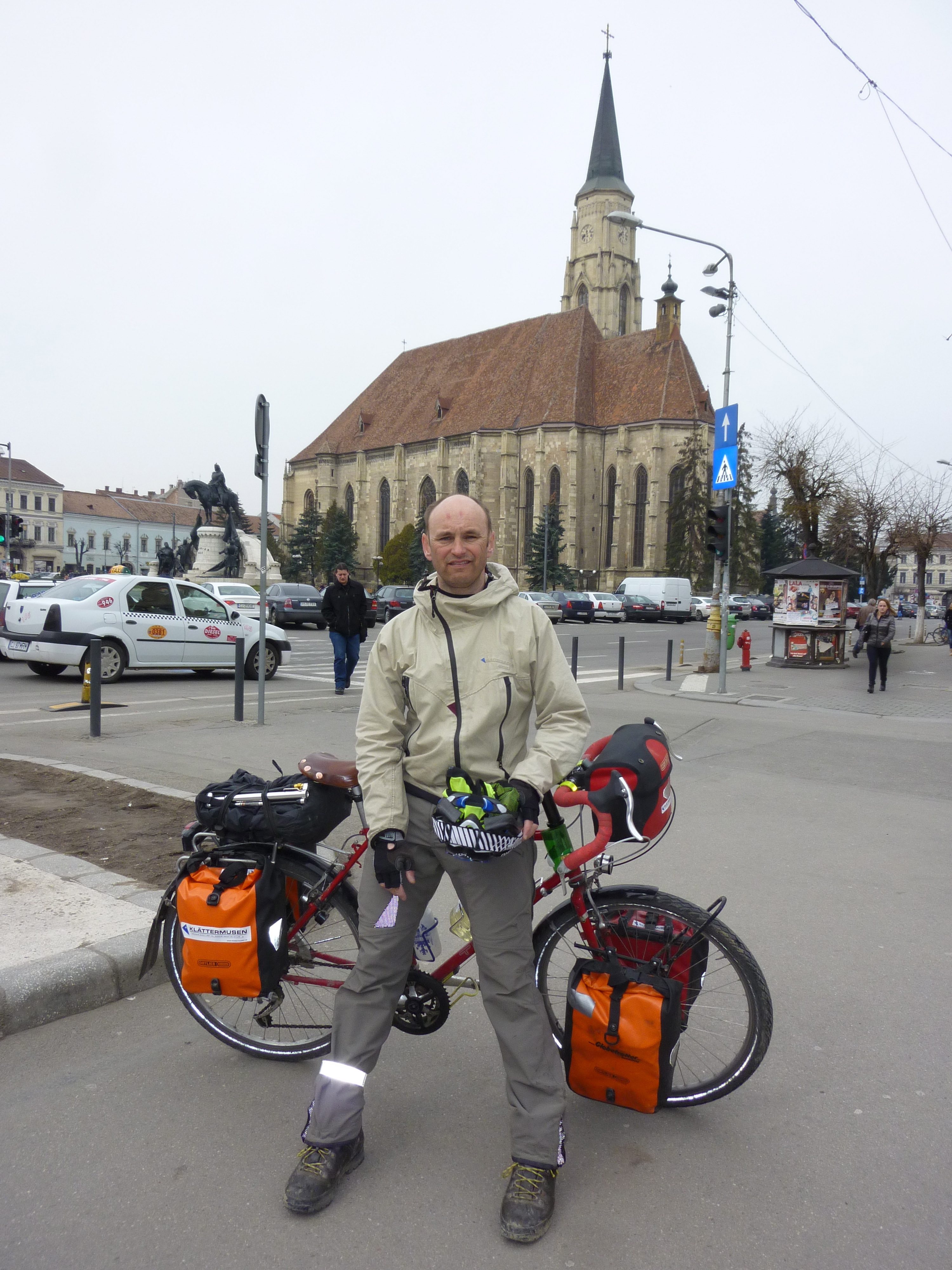 Sightseeing from my bicycle

Cluj-Napoca is situated between mountains and this morning the climb out of town started a few blocks from the main square. It was a climb of 400 vertical meters and all the way up we had a distinct feeling of lack of strenght in our legs due to the marathon ride yesterday.

We want to go on smaller roads but today we made a mistake and went on the big road that leads south from Cluj. It was a nightmare to ride on and it was one of the reasons why we stopped early today.

When we found a nice hotel in the town of Turda some 30 km south of Cluj we decided to stop. We have spent the afternoon doing maintenance on our bikes and we have also taken a walk in the city center. 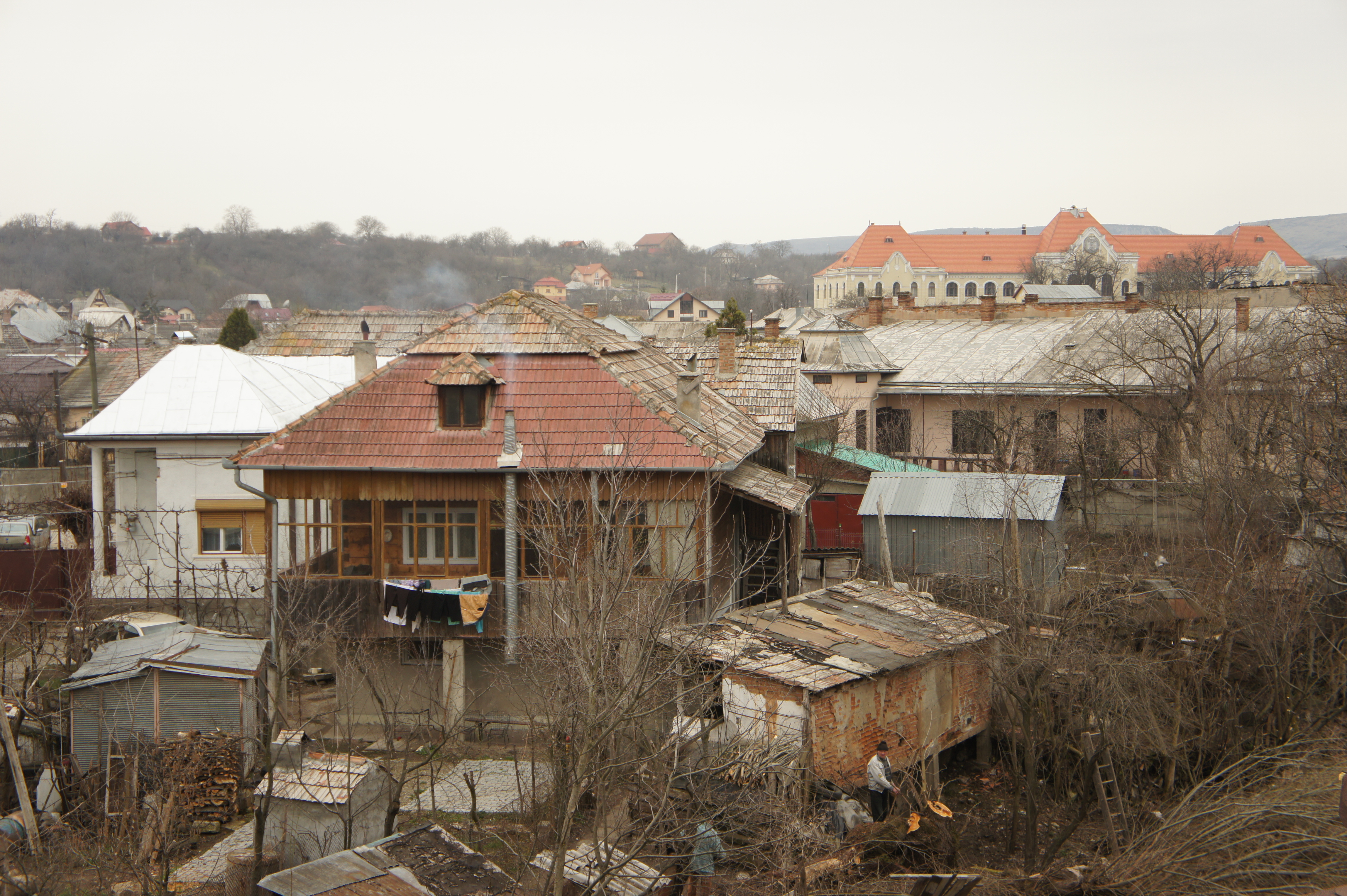 View from our window

In the city center we went into a big grocery store. It was the first time since leaving Sweden that we went to such a place. We are not homesick at all, but we felt excited to do such a normal thing as going to the grocery store to buy tomorrow’s breakfast. I think that being excited over doing something you do every day at home shows that we have started to leave or normal lives behind. 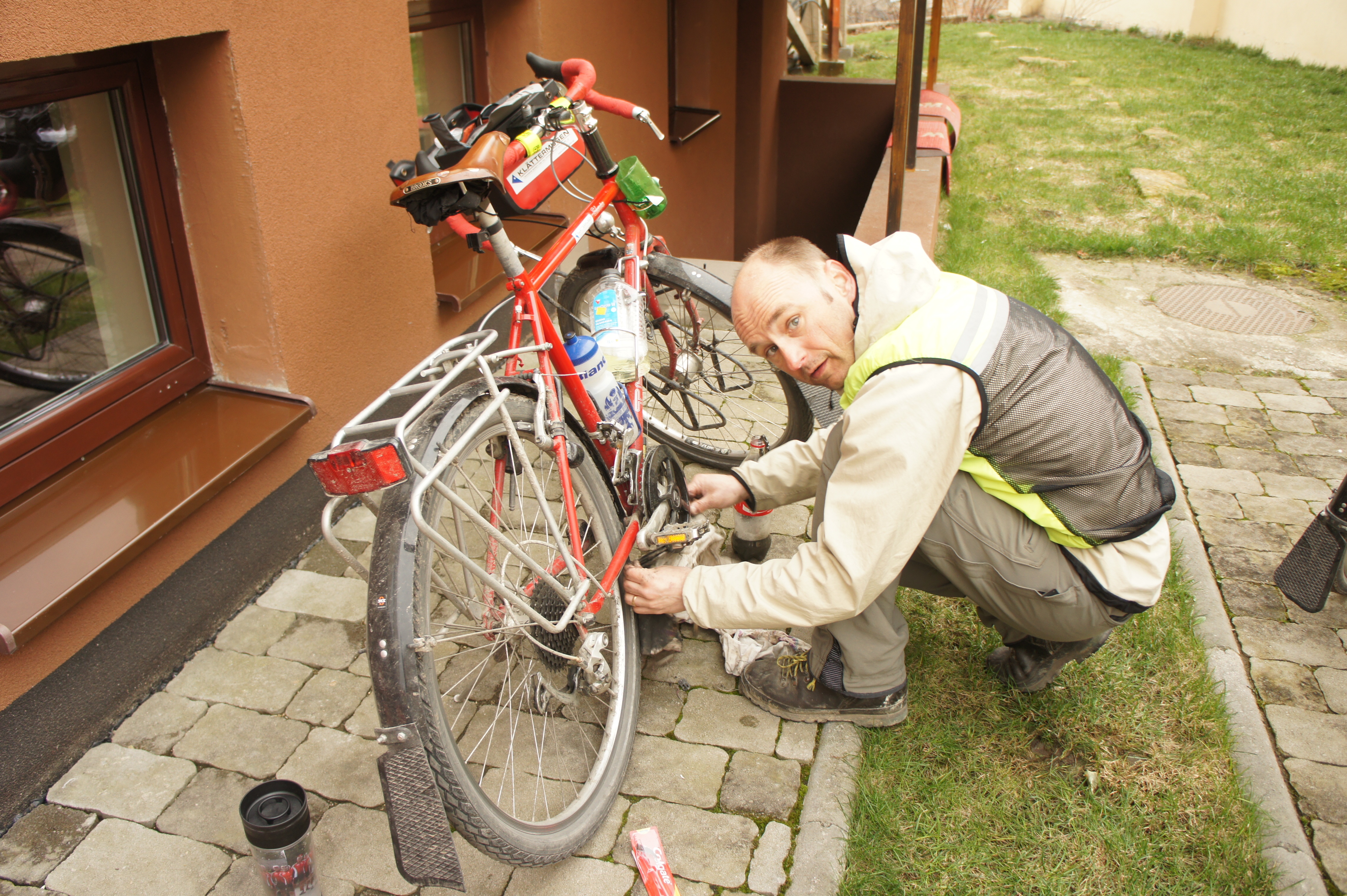 Doing my duty to clean our chains, chainrings and cassettes

We have not camped yet. Our plan was to stay in cheap hostels or motels as long as it was winter and then start to camp. Now the temperatures are OK but here in Romania the price for staying in a nice hotel in a town is about 100 SEK (11 euro) per person and night. With that kind of prices it is just too difficult to motivate ourselves to use our tent.

Staying in hotels saves us about one hour every morning since we only need one hour from waking up until we go. If we should pack tent, sleeping bags and cook food it would take a lot longer. Everytime I look back on my rear rack and see the tent or look to my left front pannier where all the cooking gears are I get a feeling of carrying too much up the switchbacks of Romania. But we will certainly need all the camping equipment later so it wouldn’t have worked to go without it.