A few weeks ago we asked all of you who follow this blog about advice for which route to take when entering Thailand. We got many interesting opinions both as e-mails and as comments directly on the blog.

After having put the question on the blog we started to discuss the issue intensively among ourselves and it seemed that both of us were more interested in going west after Luang Prabang and enter Thailand in the northern province of Nan. That route is more rough, not very populated and certainly less traveled. We felt that going this way would be the last stretch of adventure we would get before entering Thailand where we will have a comfortable ride on good roads with friends accompanying us most of the way to the finish line.

Entering Thailand in the north would also mean that we could pass Chiang Mai where we know a lot of people. It is also Loy Krathong festival on November 17th and it would have been interesting to celebrate it there.

However, the decision is now made to take the route straight south from Luang Prabang and enter Thailand by crossing the Mekhong river on the Friendship bridge between Laos’ capital Vientienne and the city of Nong Khai on the Thai side of the river.

It is not an active decision to take this route, it is an effect of bureaucrazy…..

When we learnt that China changed its visa laws we heard rumours that it would be increasingly difficult to get an extension. We have two Swedish passports each and quickly developed plan A and B.

Plan A was to apply for extension as usual and hope for the best. Plan B was to get a new visa outside China. The new chinese legislation is that one has to apply for a visa at the chinese embassy in the home country, in our case in Sweden. We prepared all required documents and sent them home to Göteborg together with the passport we currently don’t use. If the extension wasn’t granted, we would quickly leave for Hong Kong while an application for a new visa was being processed back home and then delivered to Hong Kong by courier.

It would have been a costly and 10 day long detour but we were prepared for it. When we applied for extension we were a bit nervous and extremely happy when our applications for extension were granted.

Wej will use her Thai passport when entering Laos and Thailand and doesn’t need any visas for these countries, but the passport I currently travel on has too short remaining validity to be able to use for an application of a visa to Thailand at the Thai consulate here in Kunming. The passport that I sent back to Sweden is valid for another four years and since it is already in Sweden I thought I could just as well apply for a Thai visa at the consulate in Göteborg.

This has now been proven to be extremely complicated. Both the Thai Embassy and consulate in Sweden requires paid (not only booked) air tickets (bus tickets won’t do…) in and out of the country. Having cycled this far we are certainly not interested in getting even a 5 minutes flight (there is no such flight anyway) across the Mekhong river and we don’t know yet what day we will return and thus haven’t bought any return tickets.

I have e-mailed the embassy and the consulate to ask for an exception but only got a polite answer that they have to stick to their rules. Fortunately, Thailand doesn’t have a uniform visa application procedure for its embassies and the embassy in Vientienne in Laos doesn’t need anything else than the usual application form, photo, passport copy and payment to be able to grant a visa.

My passport that is in Sweden will be delivered to me next weekend and now when it has proven impossible to get a Thai visa in Sweden for crossing the land border, I will have to go to Vientienne in Laos to try my luck there and this means that the route west from Luang Prabang towards Chiang Mai is not an option anymore and we will have to enter at Nong Khai whether we like it or not.

The struggle to get a visa has been a recurrent issue during this trip. Getting visas to the ex-soviet countries in central asia is known among travelers to be extremely complicated since it costs a lot of money and a lot of patience is needed. Getting a visa to Thailand is supposed to be very simple but unfortunately it wasn’t in my case. As a friend and warm supporter of Thailand since almost 30 years I must say that it saddens me to note that getting a visa from Sweden to enter and exit the Kingdom across its land borders is more complicated and expensive (need to buy air tickets that won’t be used) than it was to get my visas for Azerbaijan, Kazakstan, Uzbekistan and even China.

However, one of the things I like with Thailand is that things are never too serious and life is a bit ad hoc. If the Thai embassy in Sweden has very formal rules, it seems that the Thai embassy in Laos is much more relaxed and getting a visa there will most likely not be any problem.

We expect to get my visa for Thailand on Friday November 15th and cross the bridge into Thailand in the morning on November 16. The plan is to finish this long journey in Bangkok on Saturday November 30 and now we only have to decide which route to take from Nong Khai to Bangkok. We are working hard on this issue and hope to publish an update about the route through Thailand within a few days. If you do have any suggestion, please leave a comment. 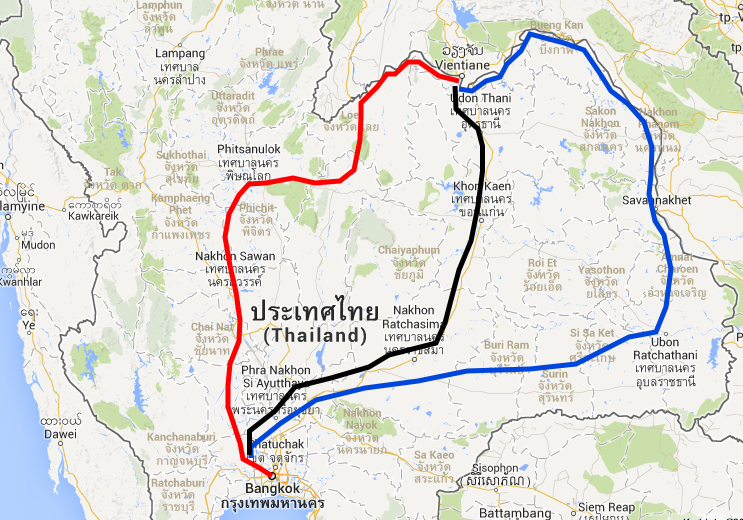 These are the alternatives from Nong Khai to Bangkok that we are considering now. Any suggestion or recommendation will be appreciated

2 thoughts on “Choice of route decided by bureaucrazy”