The river that we cycled along yesterday runs through the city of Ramnicu Valcea and there is a bridge in the city centre. When we got there work was going on and the bridge was blocked by large trucks and excavators. Signs showed the re-routed way to Bucharest and we followed them until they simply disappeared. We ended up in a residential area and an older gentleman approached us to offer some help. He spoke none of the languages we know, and we spoke none of the ones he eventually knows. He pointed towards the re-route north of the city and walked away. Then he got second thoughts and came back and made signs of us lifting the bikes. We understood this as it would be possible to pass the construction site. We went there and found a path that we cold take that led us past the area where work was going on and we could go over the bridge as planned. Going on the re-route would have been caused us ot cycle 7-8 km extra and that was someting we were not interested in.

The morning was cold, it was only -1 degree, but it felt a lot colder. We had to ride 10 km on flat ground until the hilly section started and we just wanted to get there as soon as possible so that we would get warm again. Climbing is hard work and it is strange, but when it is freezing cold we often want a hill so that we can get warm again.

These hills were rather long. Both were a bit more than 200 vertical meters and between the first and the second one there was a long downhill section that took us back to the level we started at 🙁 Going down those downhils were terribly cold and we had to stop on the top of each pass to put on extra layers of clothing to not get deep frozen during the descent.

We took many long breaks today to get warm and to find motivation. We have supported the gas stations along today’s route with a lot of money by buying their coffee.

In one of the switchbacks close to the top of the second hill there were a resting place with lots of restaurants that sells grilled food. It looked just like on a mountain road somewhere in northern Thailand. Car drivers had stopped to eat, truckers had their lunch, dogs ran around everywhere and all people looked at the crazy foreigners passing by on bicycles towards the top of the mountain. 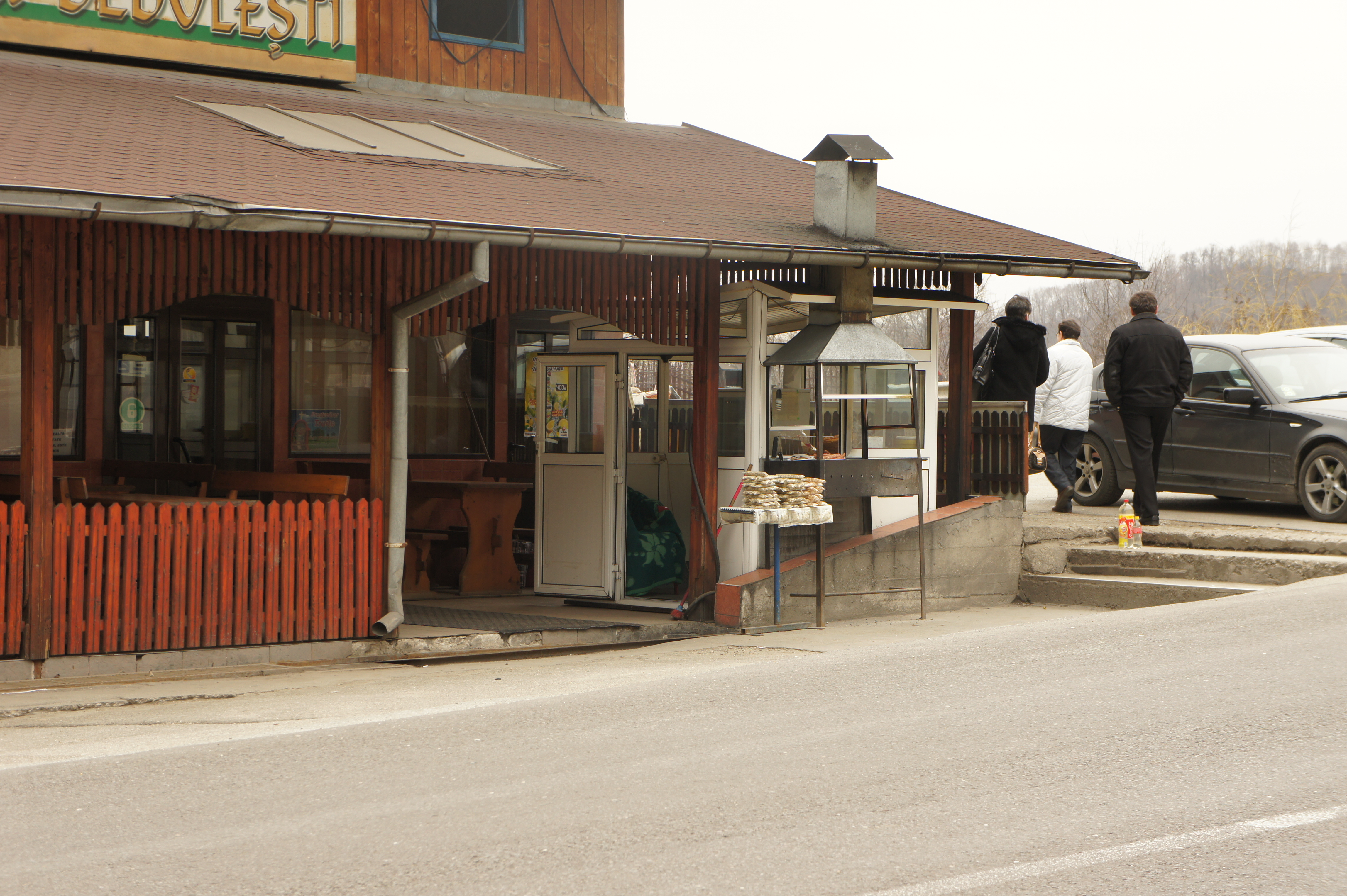 Barbecue at one of the restaurants at the highway rest place

Once down from the moutain it was still some 15-20 km to go to the town of Pitesti and there was only one road and all trucks in the southeastern part of Europe seem to pass there. One of us had to cycle mostly looking back and shouting to the other one when trucks approached so that we could go to the side and let them pass. The trucks came in large groups, often 5-8 of them together followed by a long tail of ordinary cars. It was good to stand beside the road when all those vehicles passed and between those groups we had the roads to ourselves.

Like a scene from any hilly road on Thailand. Barbecue chicken vendors side by side of each other.

When we arrived in Pitesti we were extremely cold. We wanted to go at least 10-20 km further to have Bucharest within reach tomorrow. I have a thermometer in my cycle computer and during the last our of cycling I could see the temperature falling from -2 to -4.5. The wind caught up and it started to snow.

It is now ”only” 102 km to Bucharest on a small road that is mainly downhill. Weather forecast looks bad with colder temperatures tomorrow, headwind and snow. We called our friend at the Thai Embassy in Bucharest and she said that schools would be closed tomorrow because of the weather conditions.

As mentioned in a post a couple of days ago we have now had winter in Sweden, in Hungary and in Romania. The problem with the weather in Romania is that it changes form day to day. Nice spring one day, snow storm the other and then next day again it is once again spring. We are sick of this kind of weather….