It is inevitable to get mechanical problems on a long tour. This post is about how we solved a few problems in Trabzon.

When we returned from our half day trip to the Sümela Monastery my rear wheel was flat again. We had left the bikes behind the bus ticket counter when we went to the monastery and there was no room to fix the tyre there so I simply took my bike and wheeled it 100 meters to the city square and started to work on it.

Turkey’s football association had an event on a stage at the square and we set up our little work shop beside it. Naturally we draw some attention and one of the organizers came to help me. He then gave us tea, drinks, souvenirs and had his photographer take a picture of him and us on stage with a trophy some turkish team had won in a tournament. 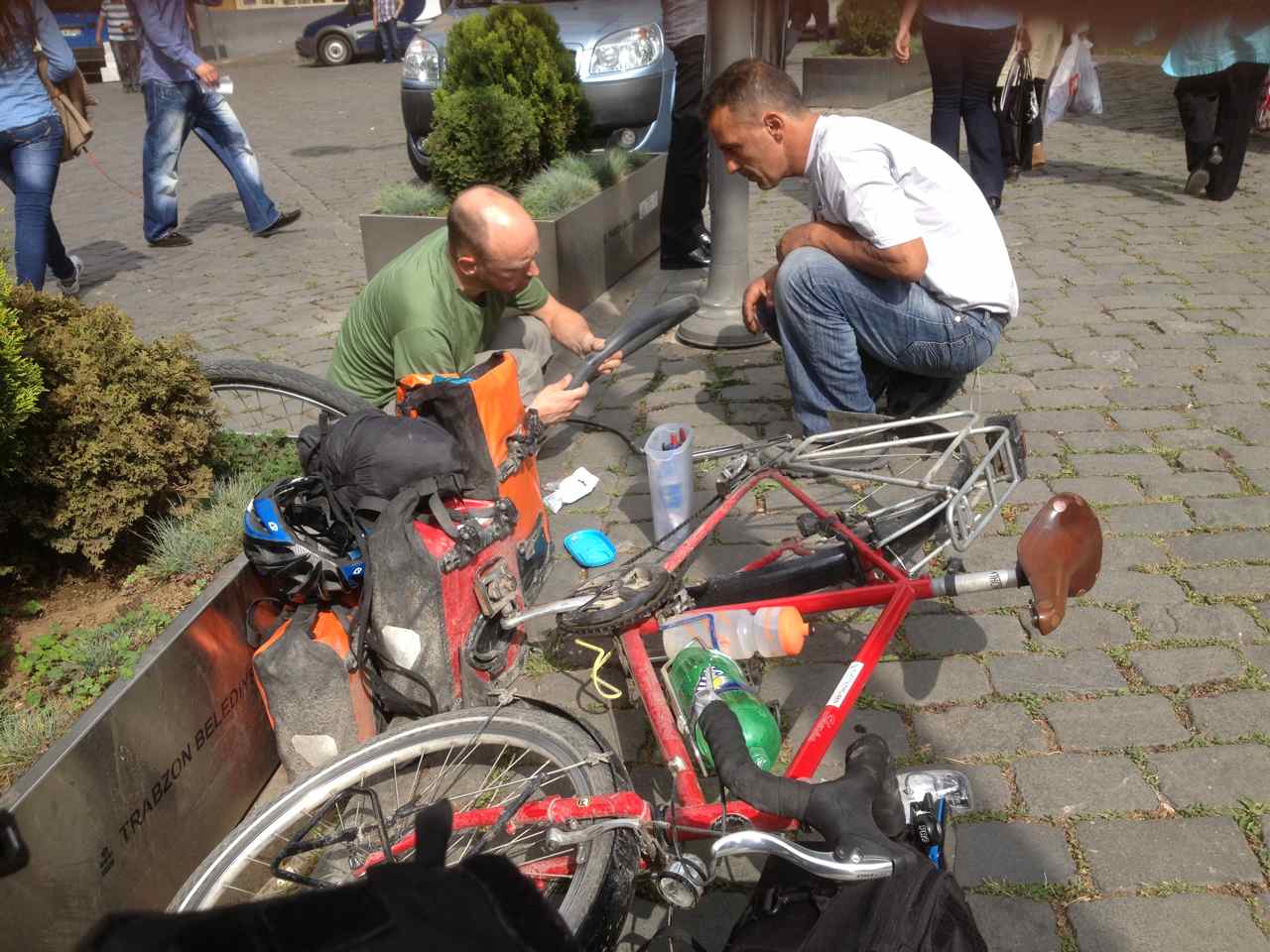 The guy from Turkey’s football association helping me fix my 5th flat.

The tyre had gone flat while we were away and I suspected that my last patch had not glued properly which turned out to be the case. We use glueless pathces and it is crap. Of the 6 flats I have got so far 3 have been due to those glueless patches not sticking properly. They may be quick to work with and probably good on short tours around home, but they are useless on an extended tour like this. We will buy some proper old style patches as soon as possible.

A few days ago my bike fell on its left side when it was parked at a gas station. Unfortunately my barend shifter (Swe: växelhandtag) broke and I could no longer change my front gears. The ride for the coming days was flat and I managed to put the chain permanently on the big front chainring.

I also discovered that one of my spokes (Swe: eker) had been bent. I suspect it happened when the bellboy at the hotel in Samsun dragged our locked bikes the 200 meters from the garage to the reception.

Riding only on the highest gears is possible as long as it is flat, but after Batumi in Georgia we will have to climb some big mountains and then I need to be able to shift between highest and lowest gear so this issue needed to be addressed.

After we had returned from Sümela Monastery we spent the afternoon looking for a bike shop. It was not easy but finally we found one. The owner/mechanic didn’t speak any English but one of his visitors who appeared to know nothing about bikes spoke a bit of German. I am happy, and a bit proud, to announce that we managed to communicate about what needed to be done to my bike 🙂 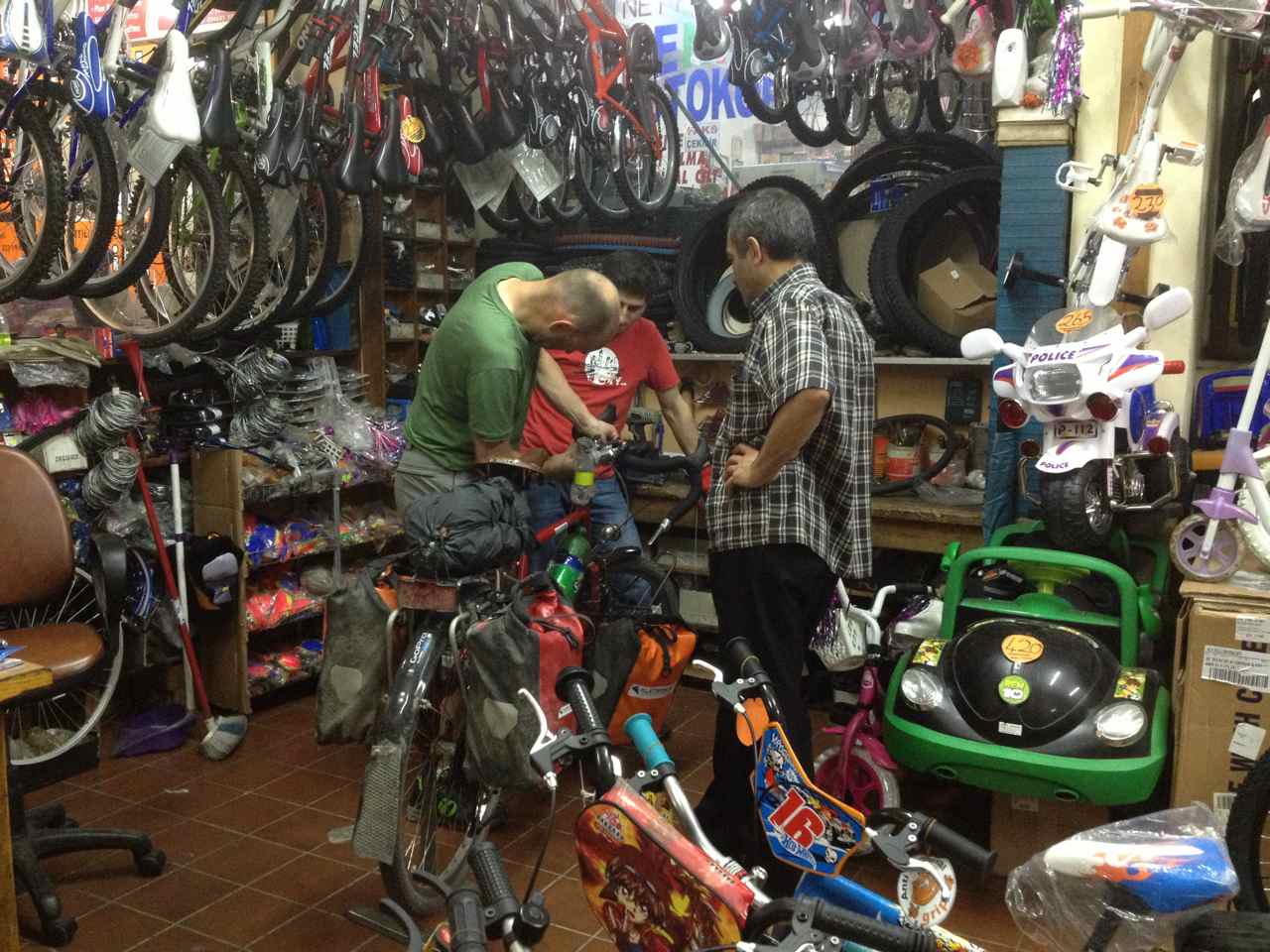 Using my limited German and showing what needs to be done. The guy on the right acted as translator

The shop was not well stocked, but certainly good enough. The shifter that had broken is a rather unusual type and I replaced it with a one that is intended for simple MTB or city bikes. I am sure it will last long enough for me to find a proper replacement if not all the remaining way to Bangkok. 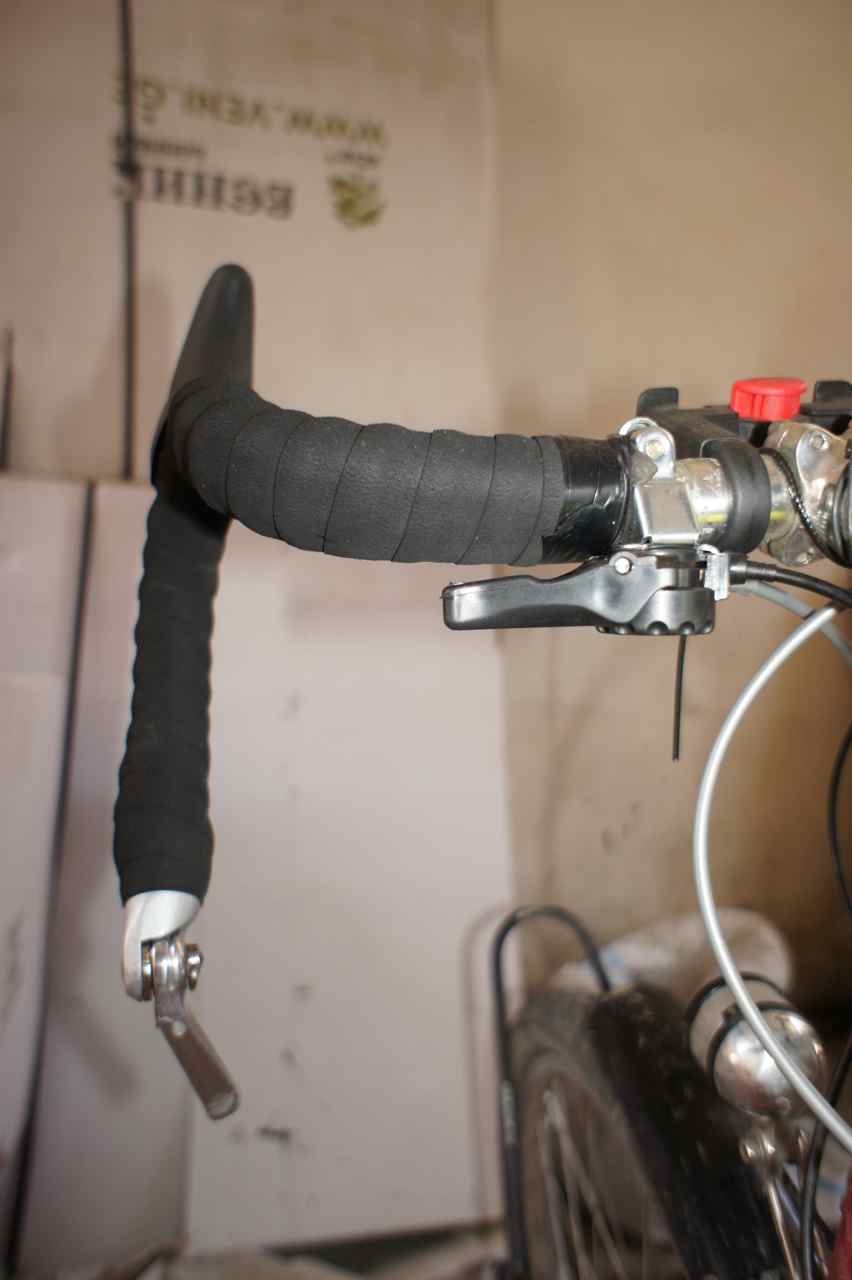 My new shifter set up. The broken shifter hangs dead at the barend and the new is upside down close to the stem.

There was not enough space to place it correctly on my handlebar so we put it upside down. It is certainly not the ideal position but a simple choice when the alternative would be to ride up the mountains using the highest gear.

I also asked the mechanic if he could help me to replace my broken spoke. He misunderstood the question and said he probably didn’t have any spoke with the correct lenght. I then pulled out our spare spokes from the seat tube and then he got the message and immediately started to work.

With a new spoke and ability to use all my gears I feel ready for the mountains of Georgia.

To other touring cyclists with mechanical problems in Trabzon.

If you are on the K. Maras Cd street with the back to the main square you will have to turn left to the small street immediately before hotel Zorlu. You will find the shop inside the galleria that is opposite to a hamam. It isn’t a well stocked shop but basic things can be fixed. 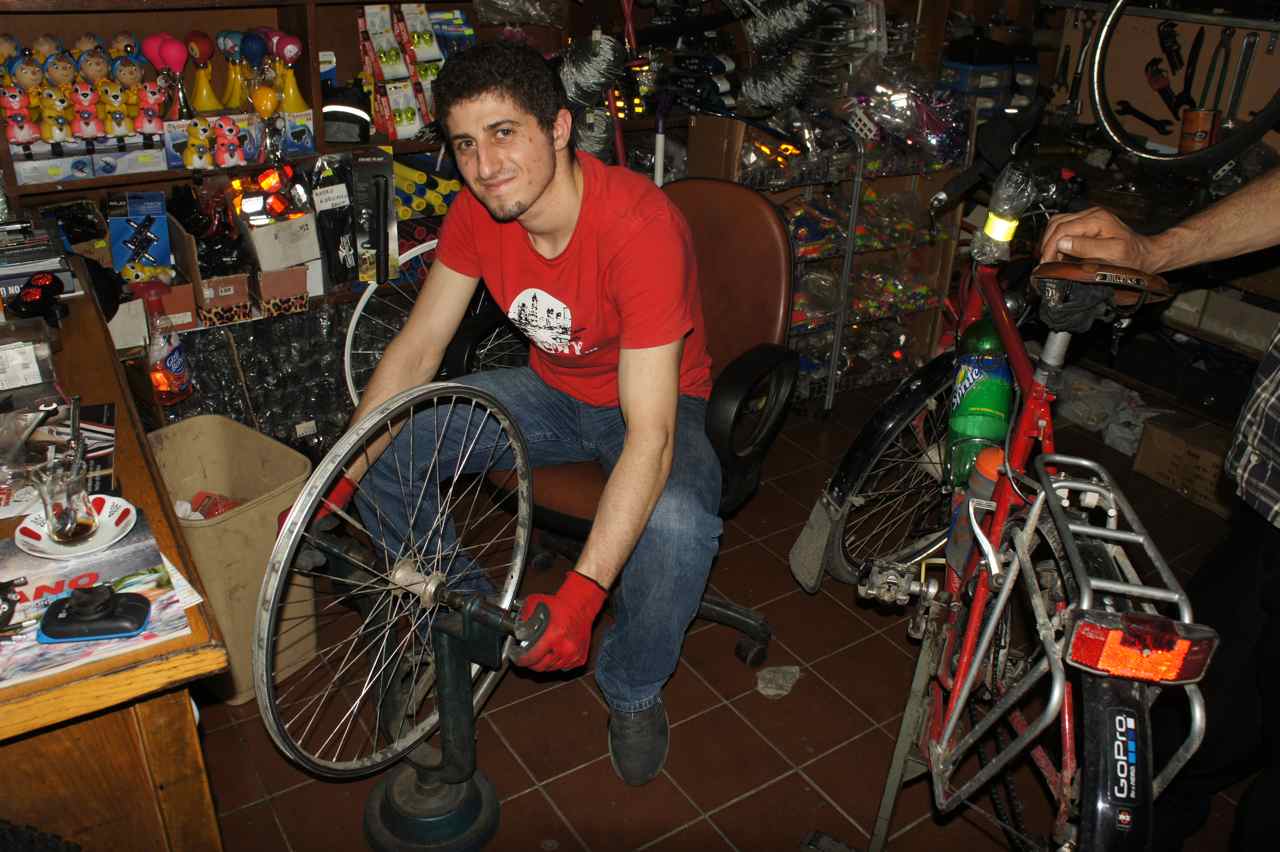 The mechanic trued my wheel after replacing the spoke.