Chengdu is nicknamed the City of Hibiscus but is maybe more known for being the home to lots of cute pandas. Being one of China’s biggest cities Chengdu has a lot to offer for a visiting cycle tourist.

Our first day was spent by riding 10 km through the center of the city to a bicycle shop where we hoped to get our drive trains cleansed and my rear wheel trued. Since it was holiday time, the staff in the shop were very busy and only had time to assist in trueing the wheel, which is something we hardly can do successfully by ourselves.

The second day we didn’t do anything but sleeping.

The third day we made an excursion to the shopping areas south of the city. We need to buy a mosquito net to use during our trip through Laos and Thailand and we firmly believed that this could be found at Decathlon which is a French sports and outdoor retail chain with stores all over the world. Opposite to Decathlon there is an Ikea store and although legally Dutch its products, appearance and feel still is 150% Swedish and best of all it sells Swedish sweets and other foodstuff to the joy of a bypassing cycle tourist.

Visiting Ikea a rainy Saturday after payday in Sweden is a bad idea if you want to be alone. The same goes for visiting an Ikea store in China during the ”golden week”, i.e. the week long break during the autumn – you will never be on your own and there will be waiting lines to everything.

We had a cup of Swedish style coffee and some cakes at the restaurant, but didn’t bother to go in to the store itself. Decathlon was slightly less crowded and we spent about two hours walking around and checking sportswear, cycle components and outdoor equipment. Unfortunately we never found any mosquito net, but we ended up with a bungy strap and a mirror for my bicycle.

We then walked back to Ikea to make a few important purchases and left the shop with Norrlands Guld (Swedish beer), Blueberry jam, Swedish crisp bread and some candy.

In Sweden the national language is Swedish and English is the first second language we learn. Swedes often get compliments for speaking good English while the opposite usually is said about the French. When looking for mosquito nets at Decathlon we had to ask the staff and all four people we talked to spoke good English. When shopping at Ikea we talked to three people who didn’t know a word of English until a fourth person arrived and helped us with our queries.

Anyway, the beer tasted wonderfully and some Swedish travelers at the guesthouse got very jealous when they saw us having crisp bread with blueberry jam…. so thank you Ikea…. 🙂 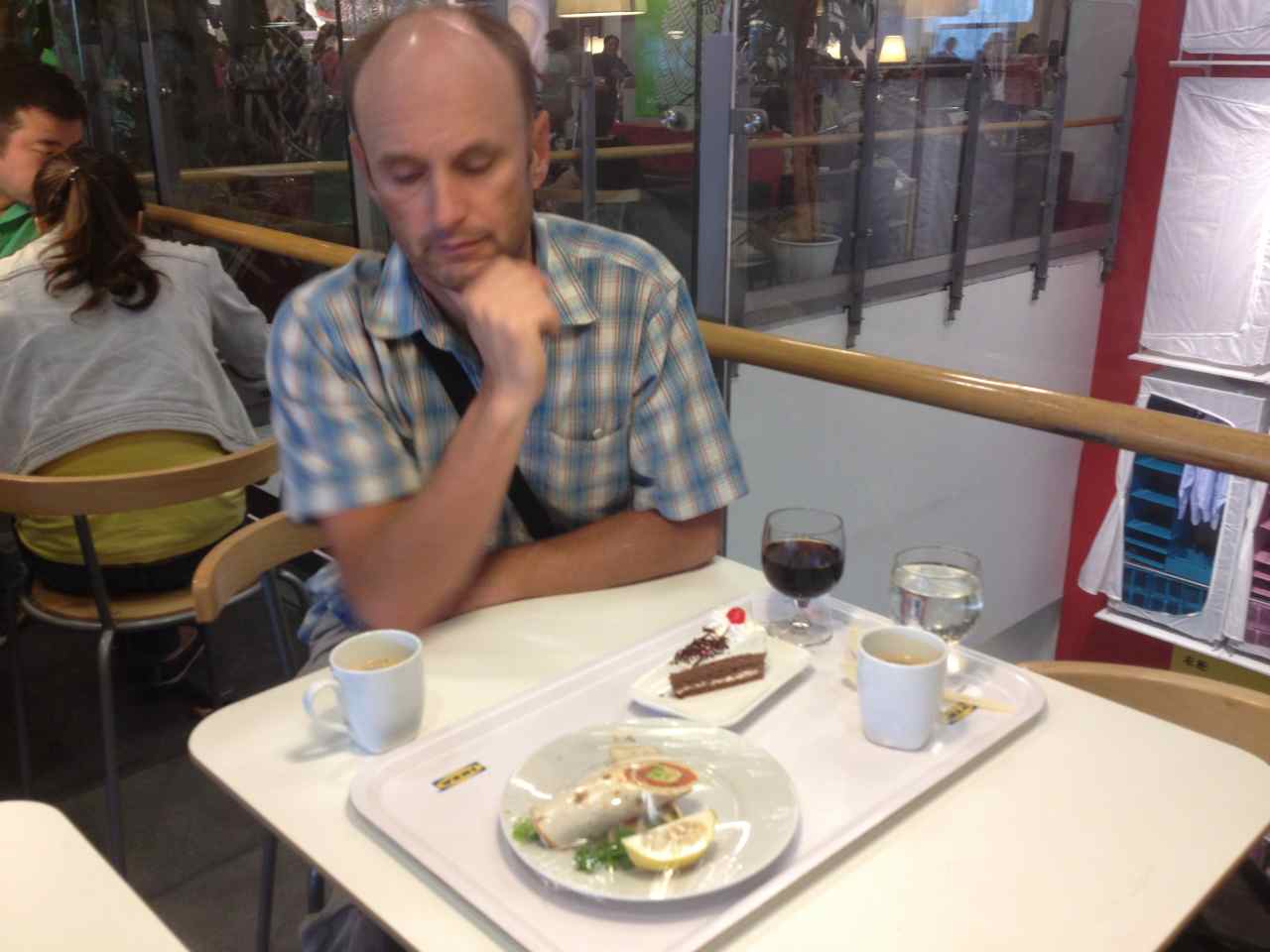 We bring a GoPro video camera along this trip and once we stop cycling in Thailand we will sit down and edit the material and make some short films about this journey. The GoPro comes with lots of mounts that can be used to attach it to almost anything. In a small shop in Russe in Bulgaria we bought some more mounts and now we wanted to buy a head strap or a helmet mount. Off we went to Chengdu’s center for electronics which is two large buildings with seven floors each packed with small and large electronic shops.

We walked around for two hours and to our surprise we found nothing. Nobody even seemed to know about GoPro, which is the leading brand in the market for action cameras.

I still contemplate what is worst, a Swedish company being beaten by a French when it comes to knowledge of English, or two chinese skyscrapers filled with electronics being beaten by a small shop in an unknown galleria in a town in Bulgaria…..

It has been nice for our bodies to get almost a week off the saddle and rest from the cycling. Yesterday we thought we should give them a special treat and went to get some massage. I wasn’t very impressed by the massage, but when the masseur towards the end of the session showed me a glass cup and indicated if I wanted it I thought that a cup of tea could be a good way to end a mediocre massage session.

The masseur then set fire to a piece of cotton at the end of a long stick and held it in the cup for a few seconds. I thought it was strange, but in a country where many people wear face masks in the streets to protect themselves from germs, I thought it was yet another way of making sure that the tea cup was clean. One second later I got a surprise when she put the cup upside down on my naked back. I could feel how the cup got stuck and then it suck my flesh into it as it cooled down. I thought it was a very strange way to serve tea and soon I had a dozen such cups on my back.

Back at the guesthouse I had to google what I had been through and found out that cup therapy is a classic treatment in China that is supposed to cure all sorts of ailments. I can’t say that I feel any better now than before I was turned into a kitchen shelf, but one thing is for sure and that is that getting a massage in the city of Pandas made me look like a leopard. 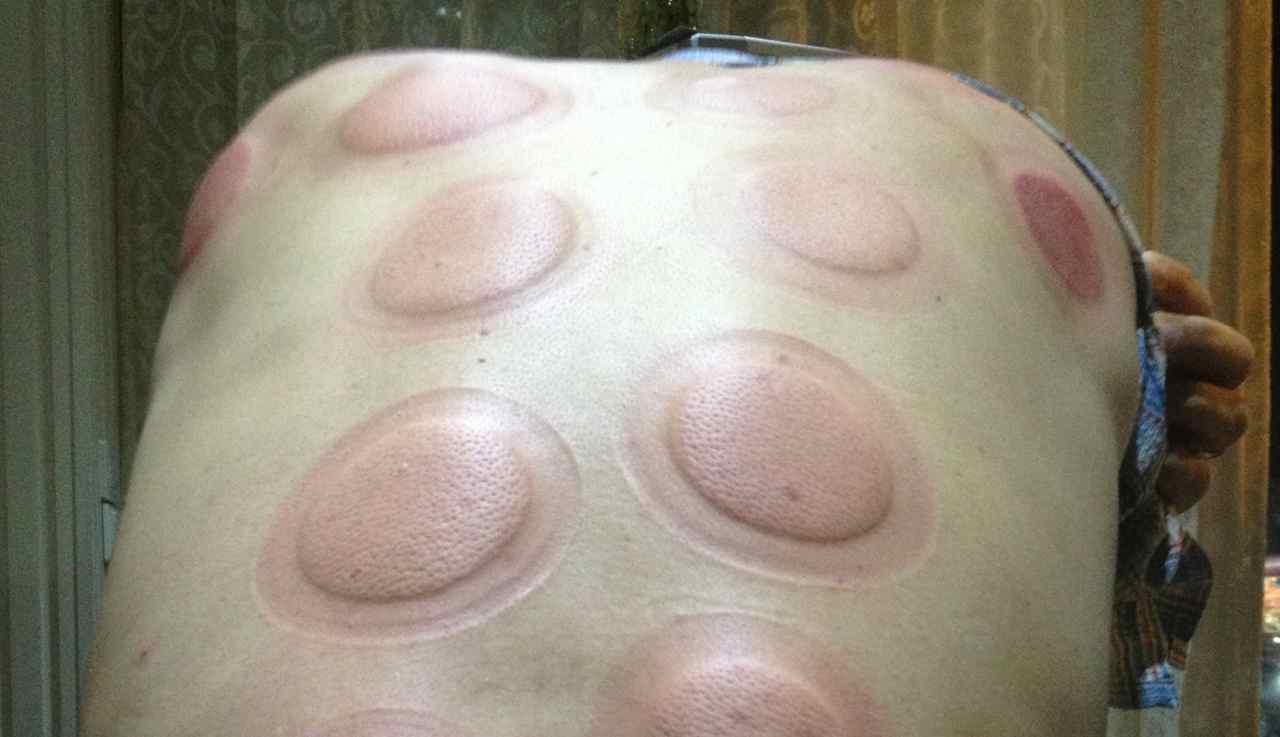 I thought the masseur offered me tea and ended up like this….

18 thoughts on “France vs Sweden 4-1, massage and electronics”