We were a group of five cyclists who had cycled together for two days but now it was time to split. Nick and Arthur had a tight schedule and needed to move on. Tom needed a rest and had decided to take a day off while we didn’t need any rest day, but since we wanted to pay a visit to the nearby Sümela Manastir we decided to stay a day too.

We woke up late and since we had good company we left later than planned and missed the bus to the monastery that clings to the rocks. Instead of visiting a site of major cultural importance we spent the day walking around in Trabzon city.
It is maybe a shame to say, but we went into a MacDonald’s restaurant. Not that we missed hamburgers and fries, but sometimes we want to re-live old memories.

When Wej and I lived in Bangkok in the mid 1990:s good coffee was scarce and the only coffee with acceptable taste and price was the coffee at MacDonald’s. Wej worked in a town two hours outside Bangkok and every Sunday when she would leave we went to MacDonald’s to have coffee, a strawberry sundae and a medium size french fries. This odd combination has stuck and we sometimes we go to a MacDonald’s to have our own special menu – this time it happened in Trabzon.

Outside the MacDonald’s there was a big event going on at the city square. We went to take a look and it seemed to be some sort of combination of cultural exhibition and travel fair and all neigbouring countries were represented. There were dance shows on stage and food stalls with food from those countries. 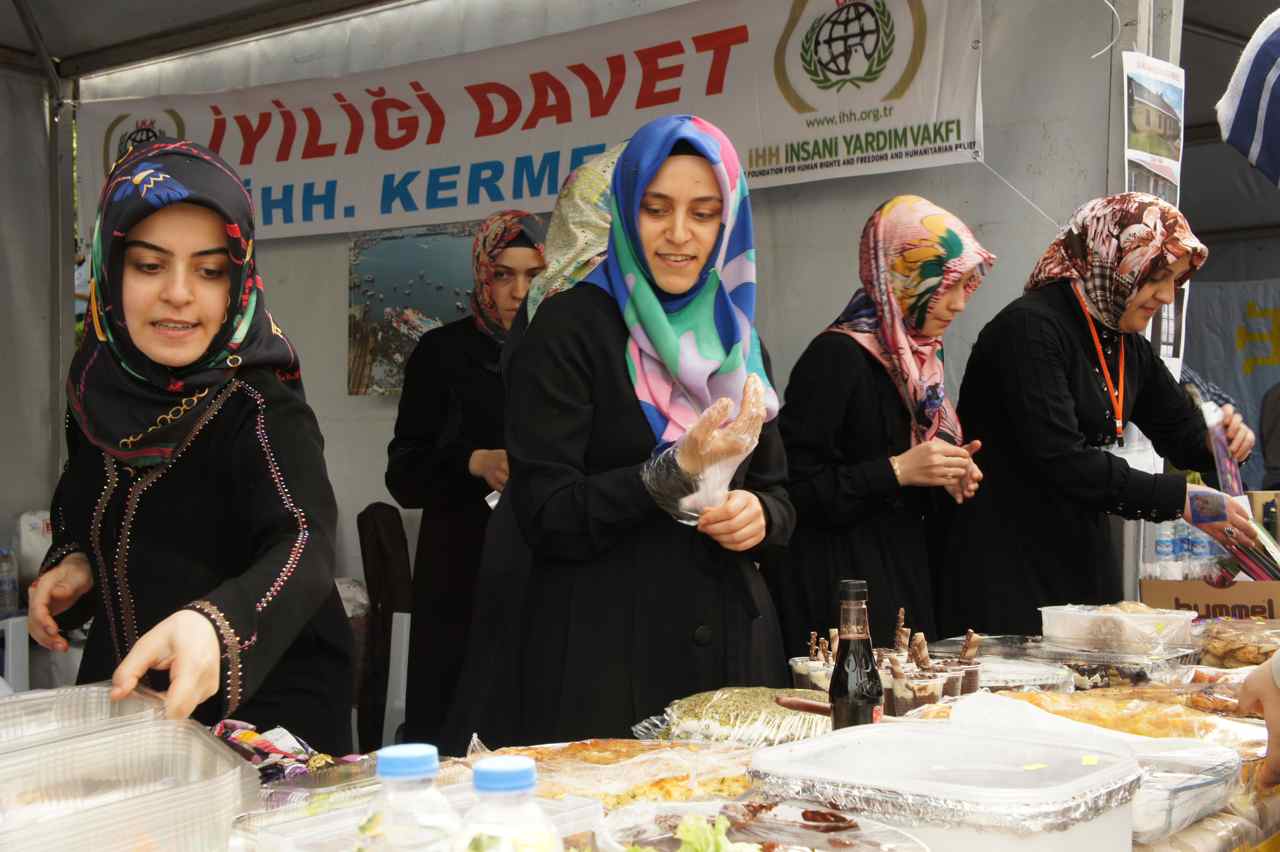 Women selling food and sweets at the fair

As we walked around the fair we spotted a thai flag and when we got closer we saw that Thailand was represented too. Wej told me she had got eye contact with the girl behind the counter and we waited until she was free to talk to us. She told us she and her fellow student friend had got a scholarship to come to study international relations at the university of Trabzon. Since she was busy we only had a short chat. After exchanging e-mail addresses and we continued to explore the city. 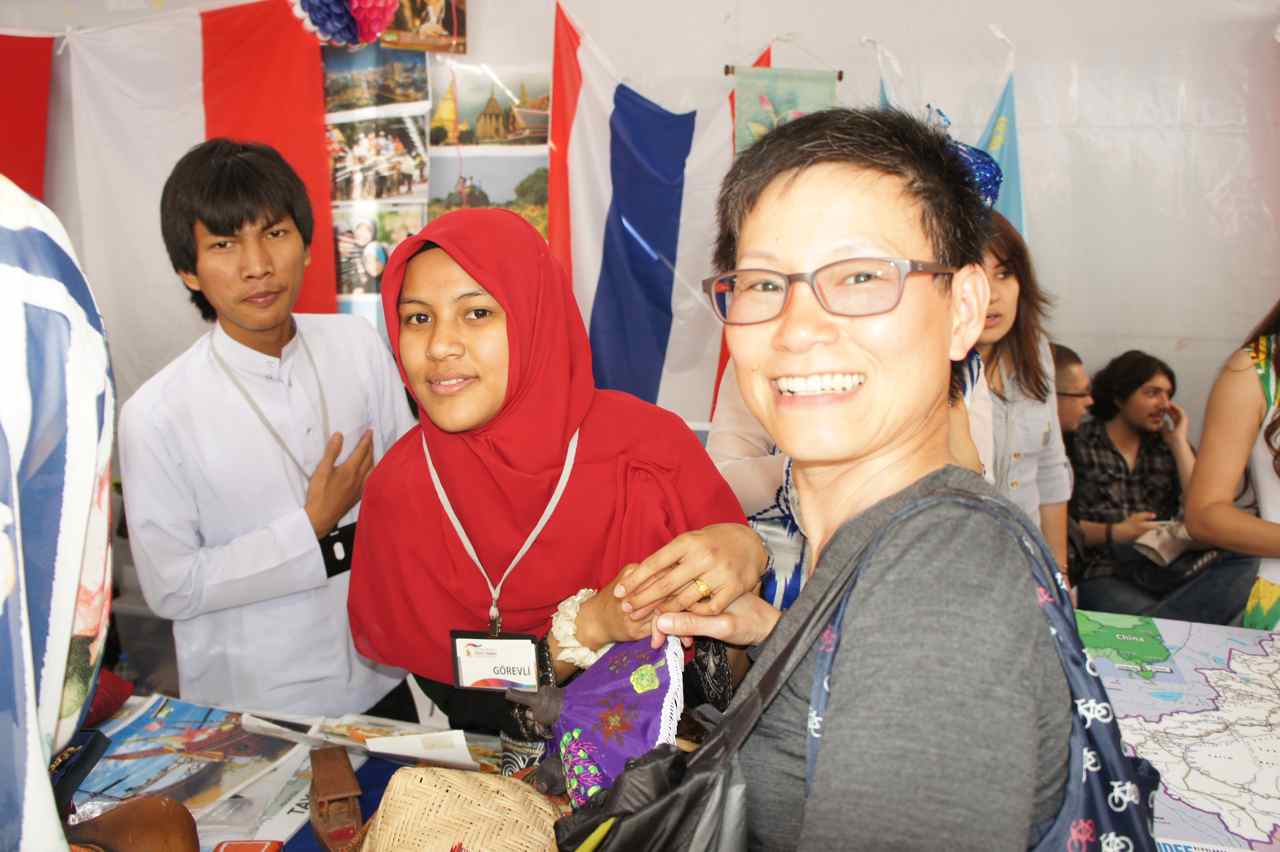 Wej and the two Thai students at Trabzon university

Trabzon is a busy city located on steep hillsides. Where ever we went it was either up or down. We had no real plans for what to see so we just went around to have a look of the city life. The main shopping street looked like anywhere else in the world. 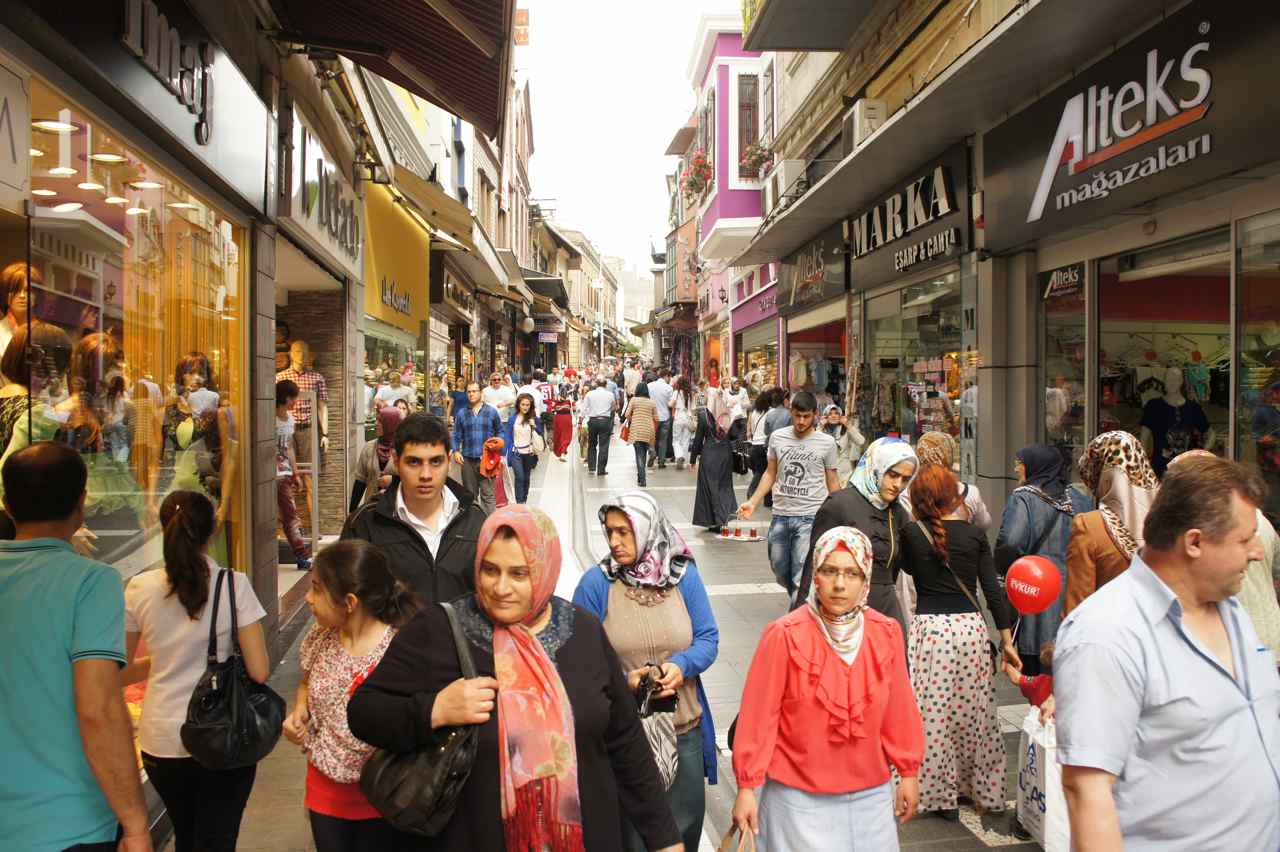 In the market zone the lanes were narrow and just as anywhere else in Turkey there were people walking around and distributing tea to the shops – just like when I got my tea at the barber shop a week or so ago. 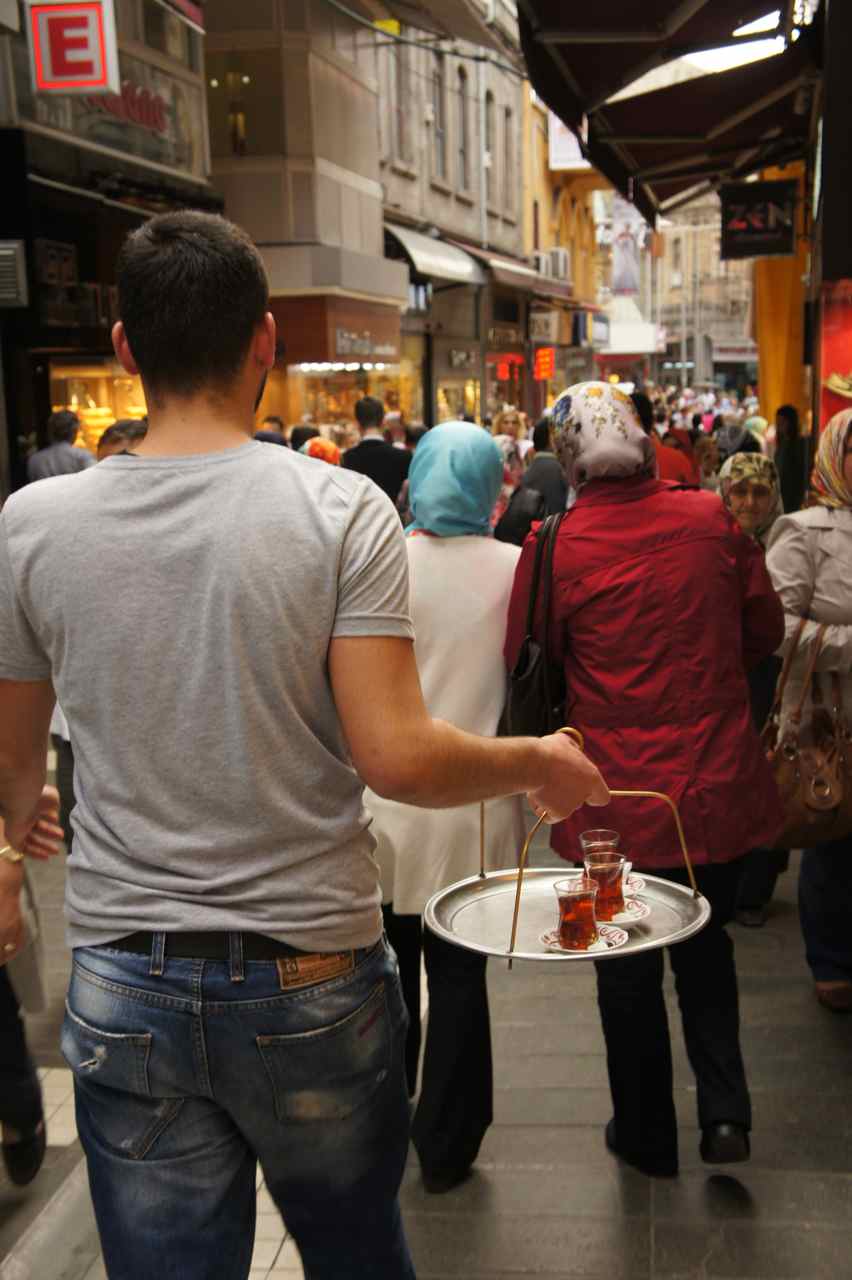 Just like in Thailand large crowds of people attracts food vendors. This guy sold steamed corn from a cart in the middle of the busy walking lane in the market. I am not so fond of steamed corn but Wej had some difficulties to decide if she wanted one or not. 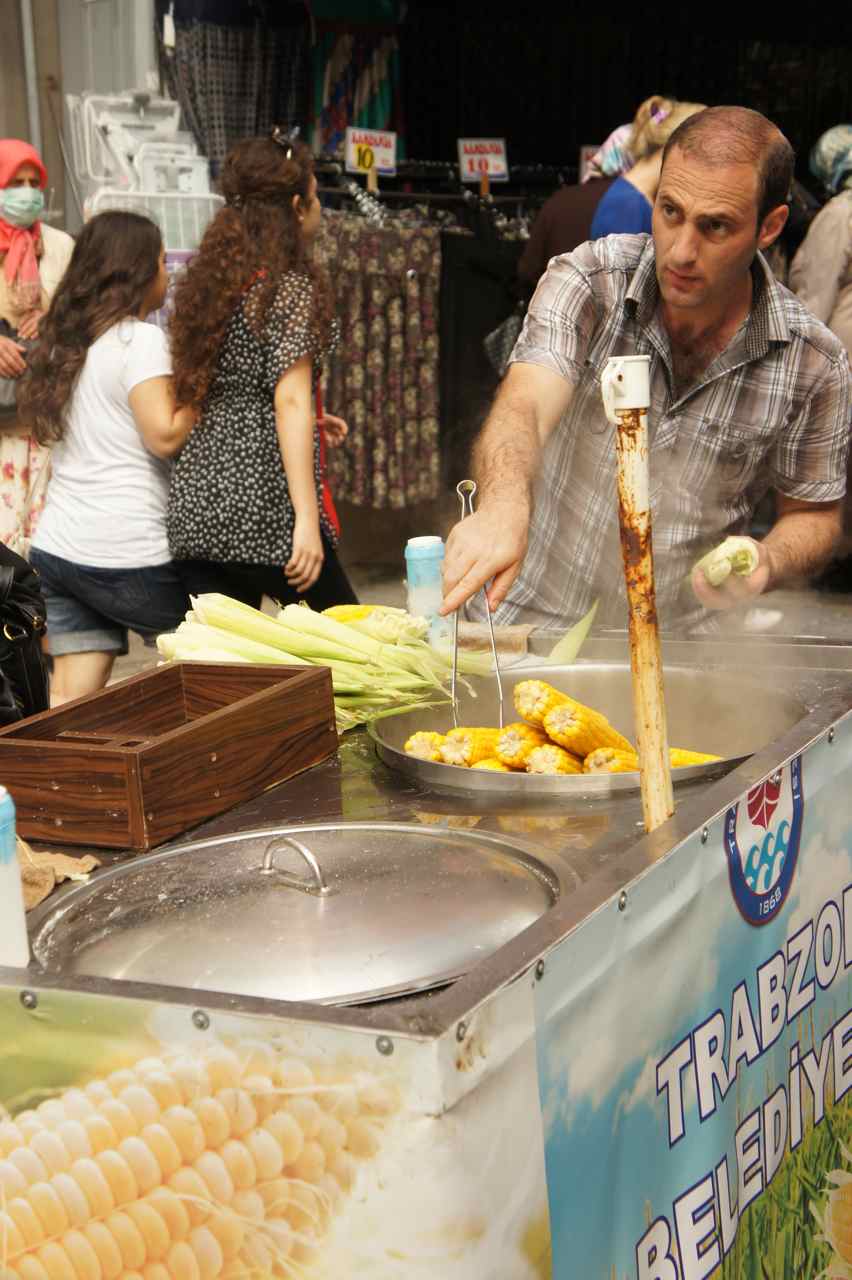 Commerce is going on everywhere, even in the underground passes under the highway. 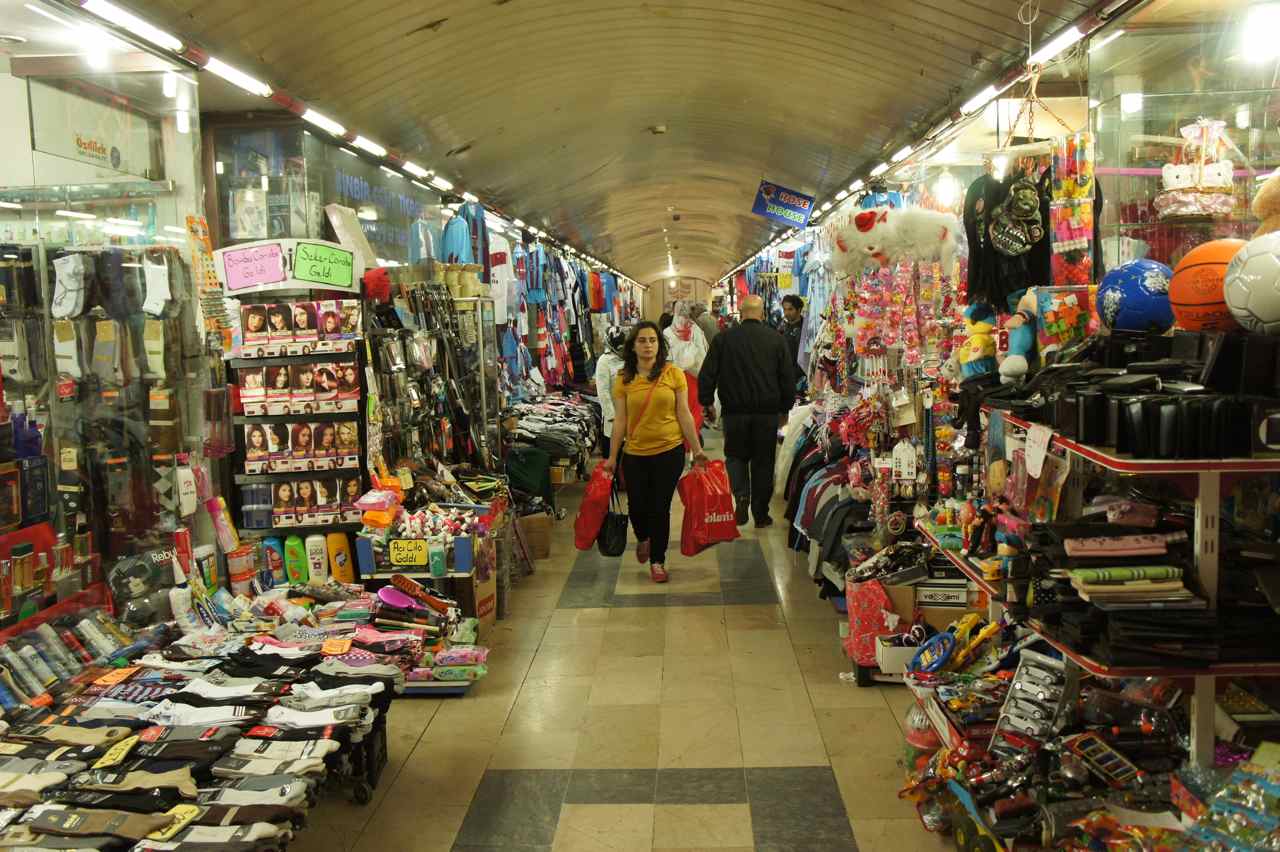 Busy pedestrian tunnel under the highway

It was a hot afternoon and after having walked around town we needed to sit down and relax for a while. What could then be better than the cafe and bar at the roof top terrace on one of the hotels? We took the lift up to the 7th floor. I ordered a beer and Wej had some coffee while we enjoyed relaxing in some nice chairs enjoying the view of the sea and the busy city center below us. 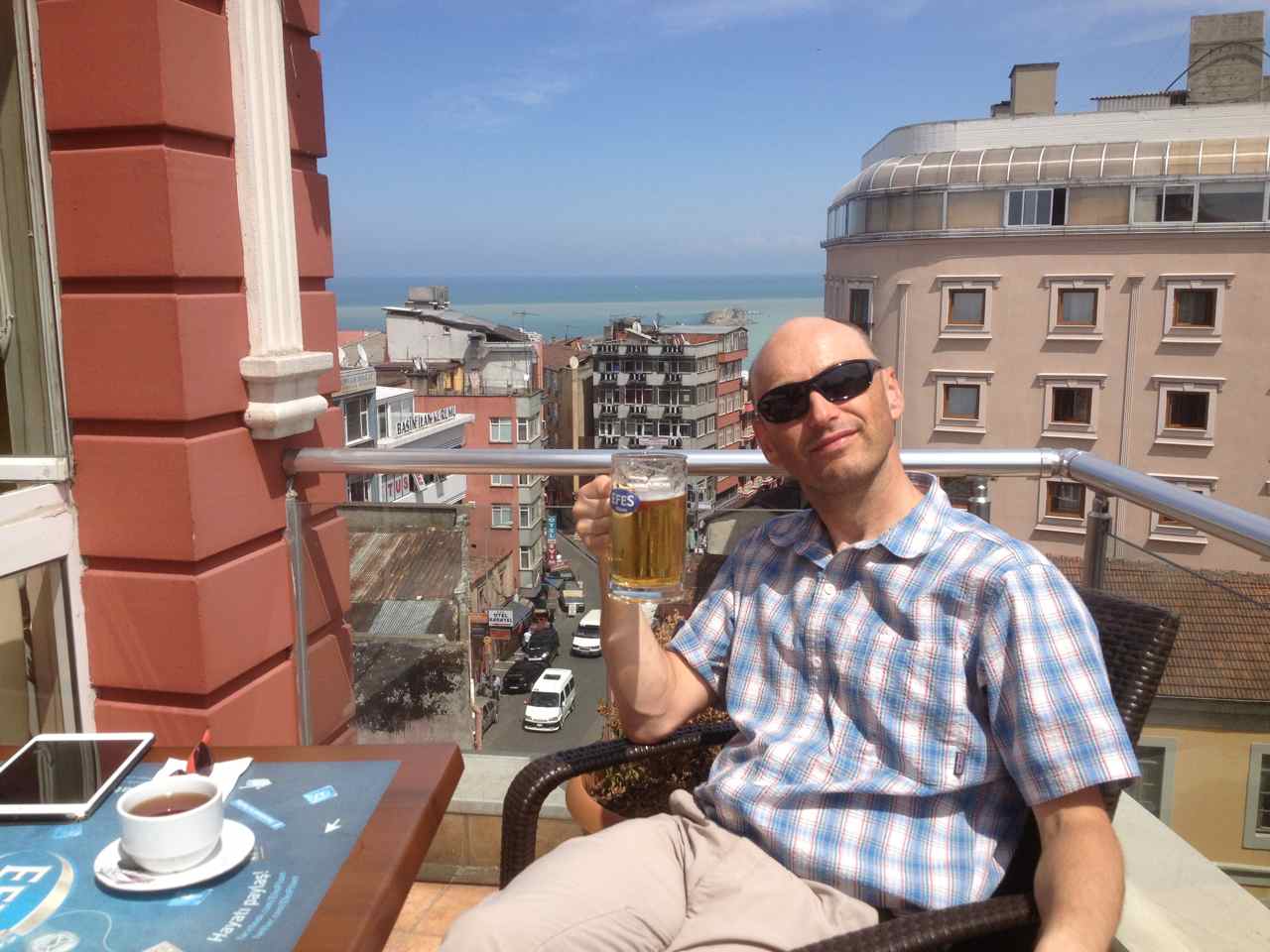 After a long day in the city of Trabzon we took a minibus back to the suburb where our hotel was. I wanted to buy a beer for me and Tom who relaxed at the hotel so we dropped by a store selling alcohol. Everytime I have bought a beer I have got it wrapped in old newspaper and put in a black plastic bag. Other things we buy are usually put in white or transparant bags but not beer. I have no idea, but if the purpose is to make it difficult for others to see what you have in your bag, then it doesn’t work. You only need to look for who is carrying a black bag….. 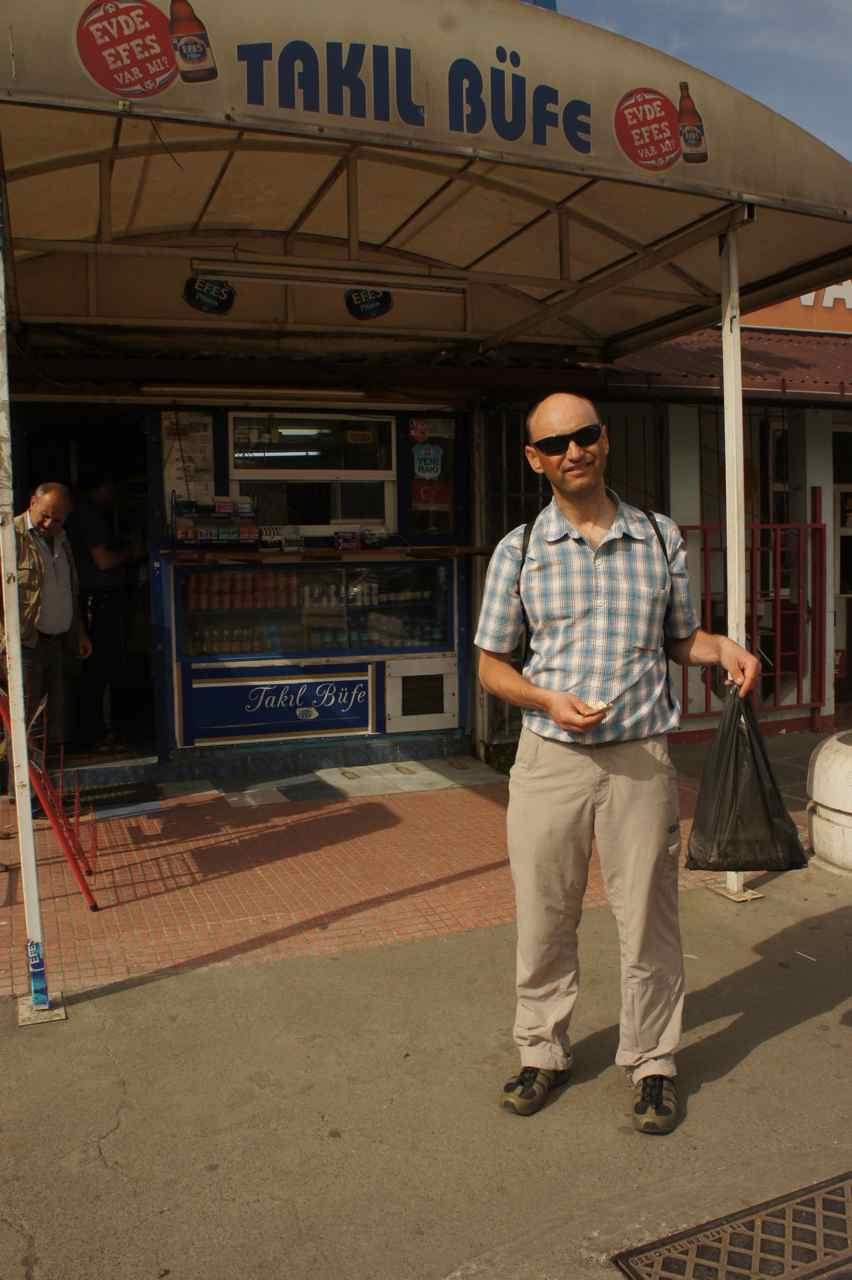 It was a cheap hotel that certainly had seen its best days, but it was cheap and certainly good enough for us. The bathroom was in need of an urgent renovation though and it seems like they already had started by replacing the lids to the ventilation with these colorful things. I wonder if the rest of the bathroom will have the same color tone once it is renovated. 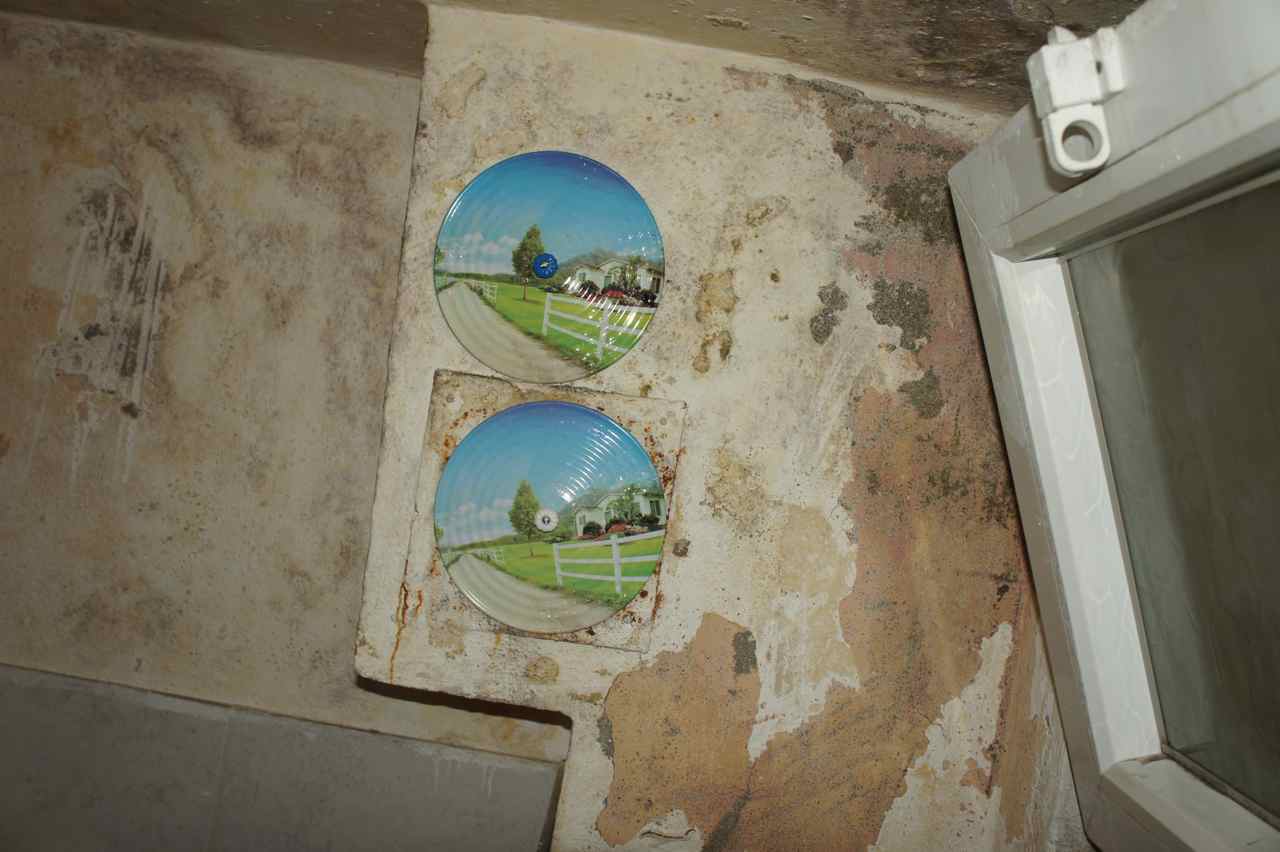 Lids to the ventilation pipes

When we woke up the next morning we checked out early and hurried into town to buy bus tickets to Sümela Manastir. We were allowed to park the bikes in a room behind the ticket counter and off we went.

Sümela Manastir is a very old monastery that has been built on the cliffs and partly carved into it. It is a famous tourist attraction only some 45 minutes with a minibus from Trabzon.

When we arrived we discovered that the place was crammed with people. Today was a Saturday and Monday was a national holiday so it felt like half of Turkey’s population had chosen to visit Sümela this day. We blamed ourselves for not having understood that it would be like this and pushed ourselves to go yesterday as planned. 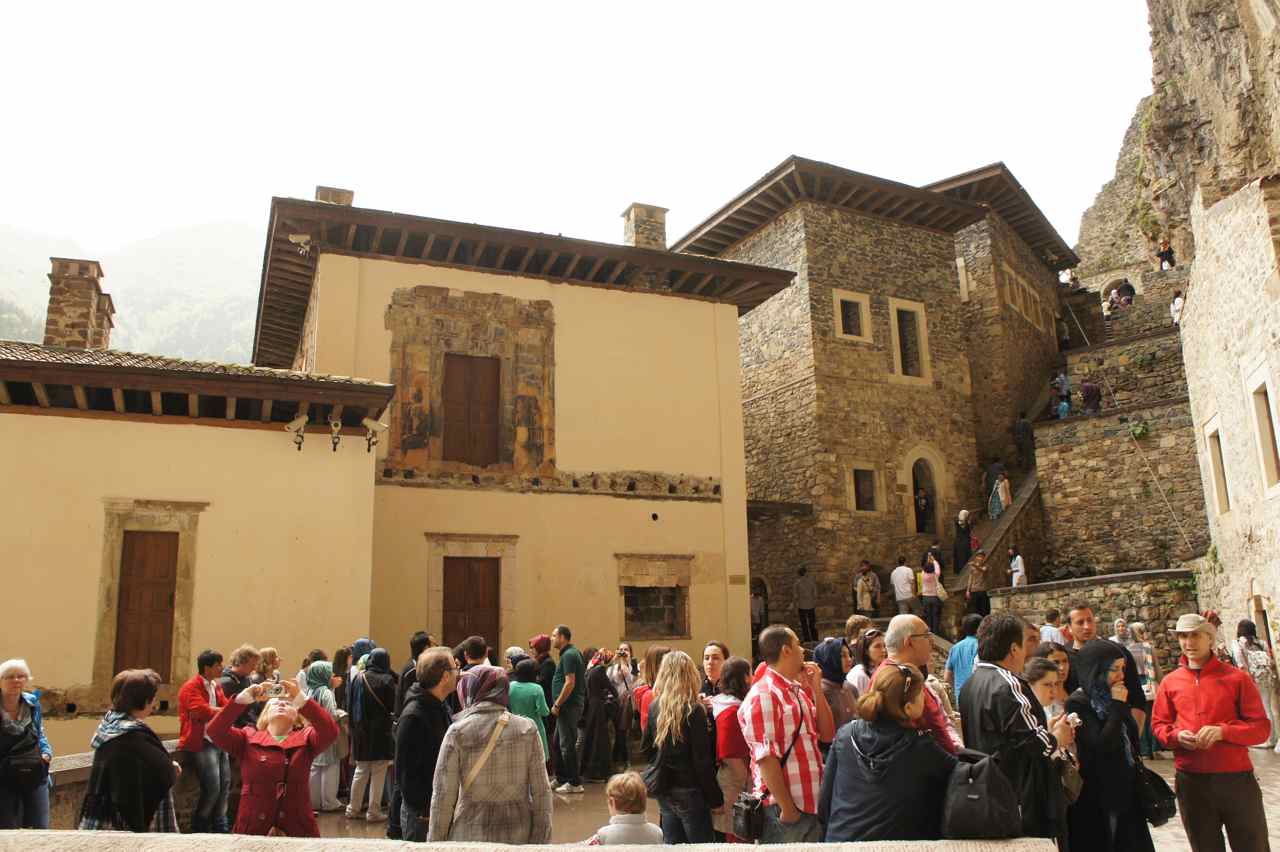 Crowded, an the only way in an out is the staircase on the right of the photo

All visitors had to pass a narrow staircase down to the courtyard. We were in the middle of it when it started to rain. The monastery sits at about 1200 meters altitude and we later learned that it rains 300 days per year. If we had only known this we would have brought our rain jackets…. 😉 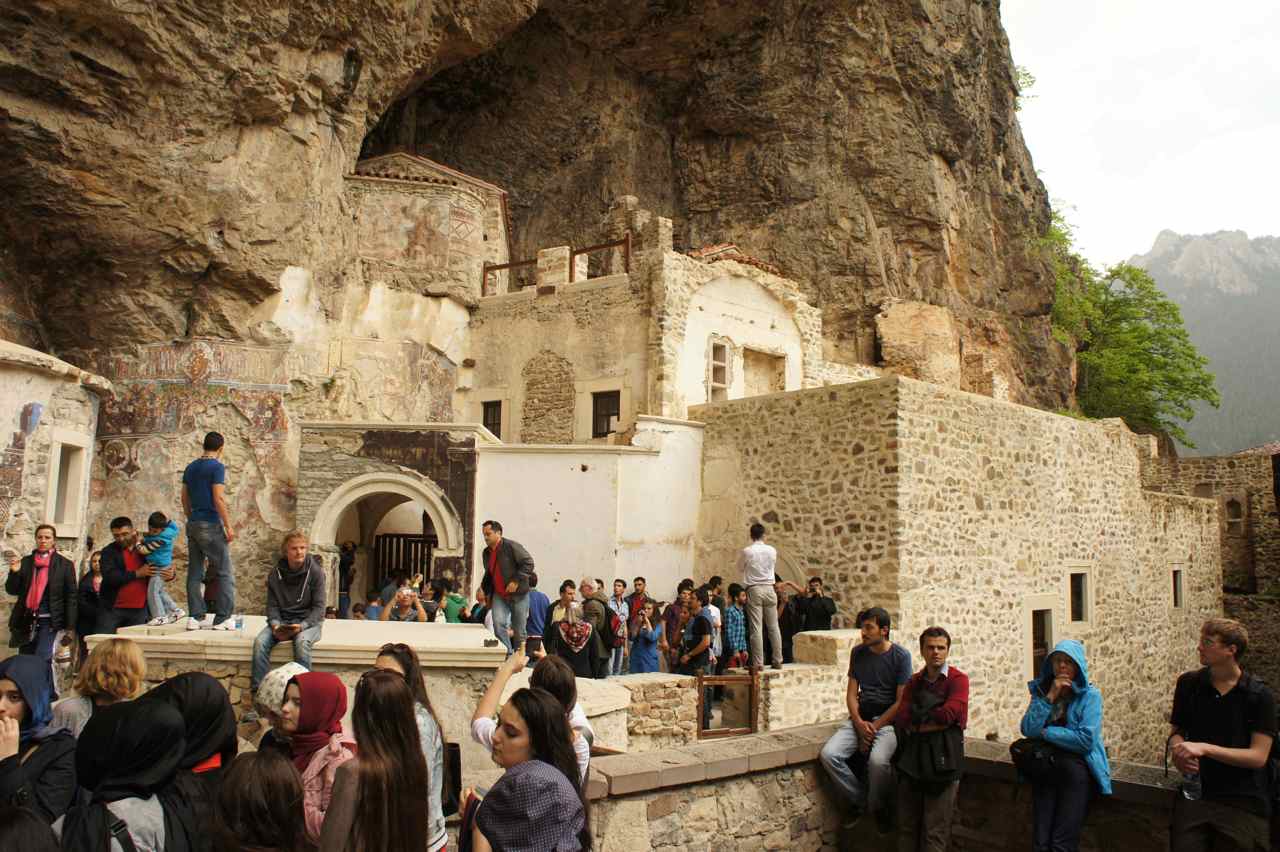 Lots of visitors at the Sümela Manastir

Sümela has huge mural paintings both inside and outside the main chapel. These murals were covered by names and dates carved into them with some sharp pointed tools. It looked like graffiti and I later learned that the culprits were bored soldiers from various armies and periods as well as some early tourists who seem to have no respect for a culturual treasure like this one. 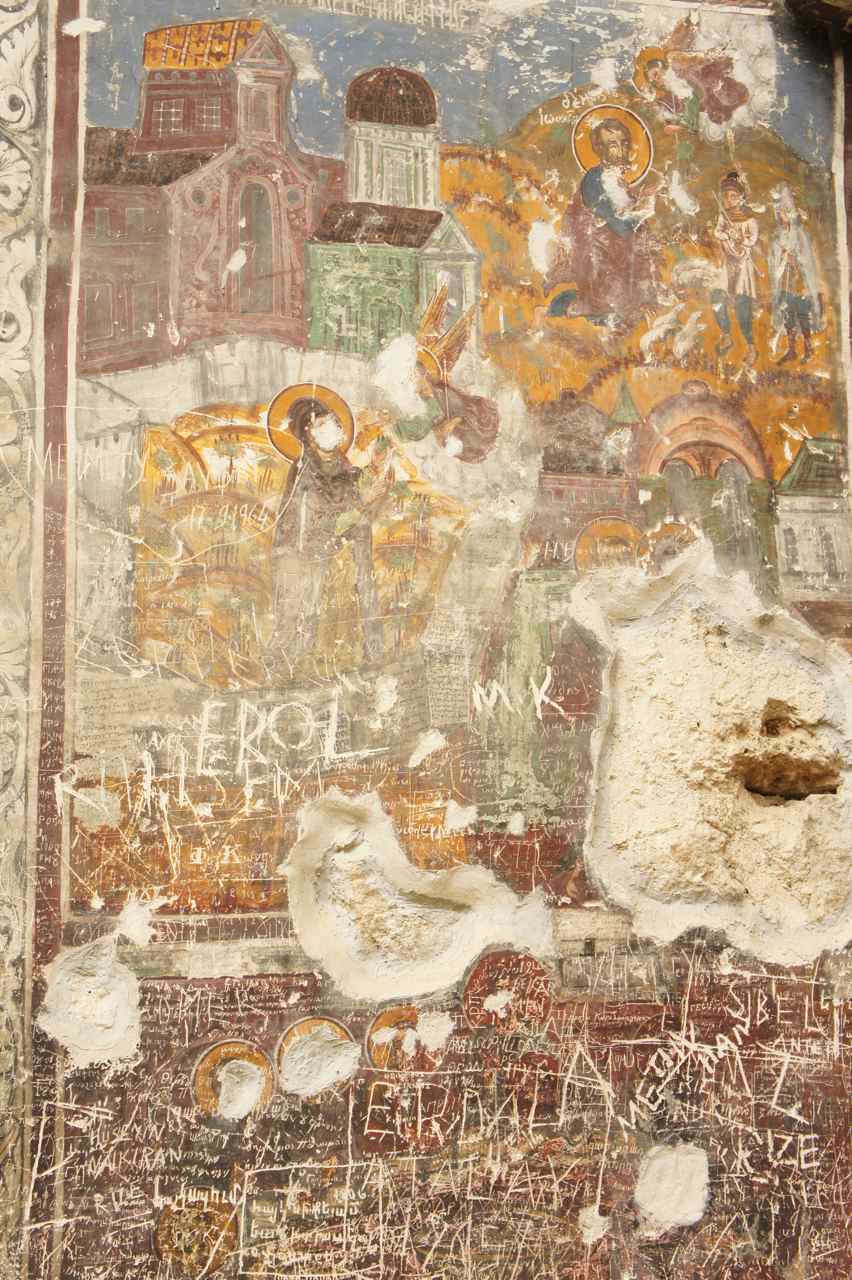 The driver of the minibus had left us at convenient walking station and told us that the bus would leave 1.30 from the restaurant. We didn’t understand much and when it was time to go we saw some of the Turkish people who had come with the same bus and asked them where to go. They told us to follow them and we started to talk on the steep zig-zag walking track down to the restaurant. The woman introduced herself as Deniz. She works as a teacher in Samsun and had come to visit her brother Mehmet who is a medical student in Trabzon. 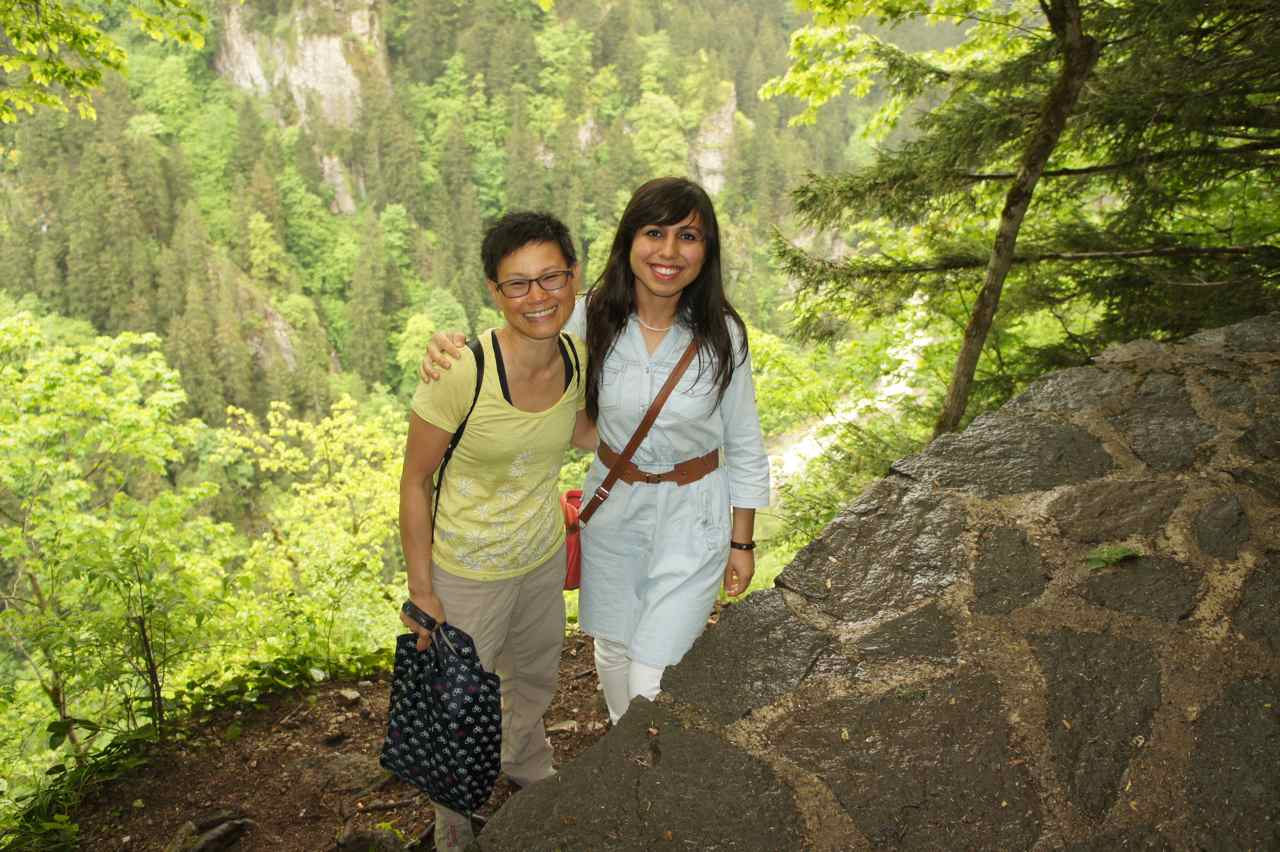 Just like at similar places everywhere there are expensive restaurants nearby. We had a nice köfte (meatballs) lunch with Deniz and Mehmet before going back to town. When I got my bike back I discovered I had got my 6th flat tyre. Instead of riding out of town we decided to stay one more night in Trabzon and fix all our technical problems which you can read about in the post ”Technical issues in Trabzon” below. 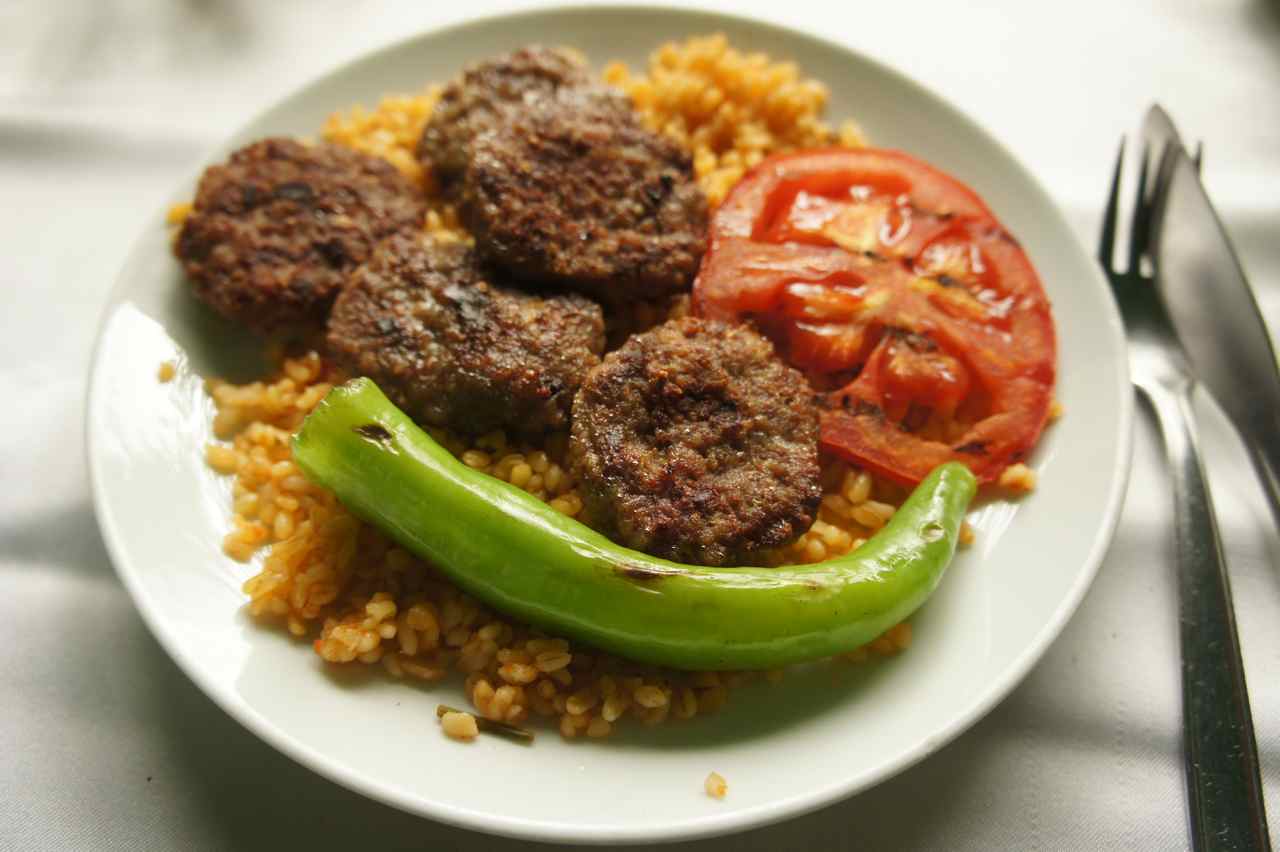