Access to internet is becoming increasingly scarce so you shouldn’t count on daily updates anymore. We will update as soon as we have a chance. Tomorrow (Sunday)) we will leave Batumi and cycle towards Batumi over the mountains which will take about five days.

Exit Turkey and entering Georgia – country number 8 on this trip
We were slightly behind schedule due to that we spent the previous afternoon after visiting Sümela to look for a bike shop and fix my spoke and shifter. With a steady tailwind and flat road we decided we wanted to go for Hopa almost 170 km away. Our friends in Zonguldak have relatives there who had promised to host us.

When we went down to the hotel’s garage to pick up our bikes we found that my tyre was flat again. I now know why – useless glueless patches – and I quickly changed to a new innertube and will repair the old one as soon as I have got hold on some proper old style patches.

By cycling along the turkish Black Sea coast we have learnt by using our own eyes what products come from what part of the country. We have passed the garlic capital in Tasköpru, the brick factories at Boyabat, the rice growing areas around Duragan, the hazelnut zone around Trabzon and as we went further east we entered an area where which supply most of Turkey with tea. The steep hills were covered by tea plants and trucks that overtook us were loaded with tea and on the road we could see tea leaves that had fallen off those trucks. 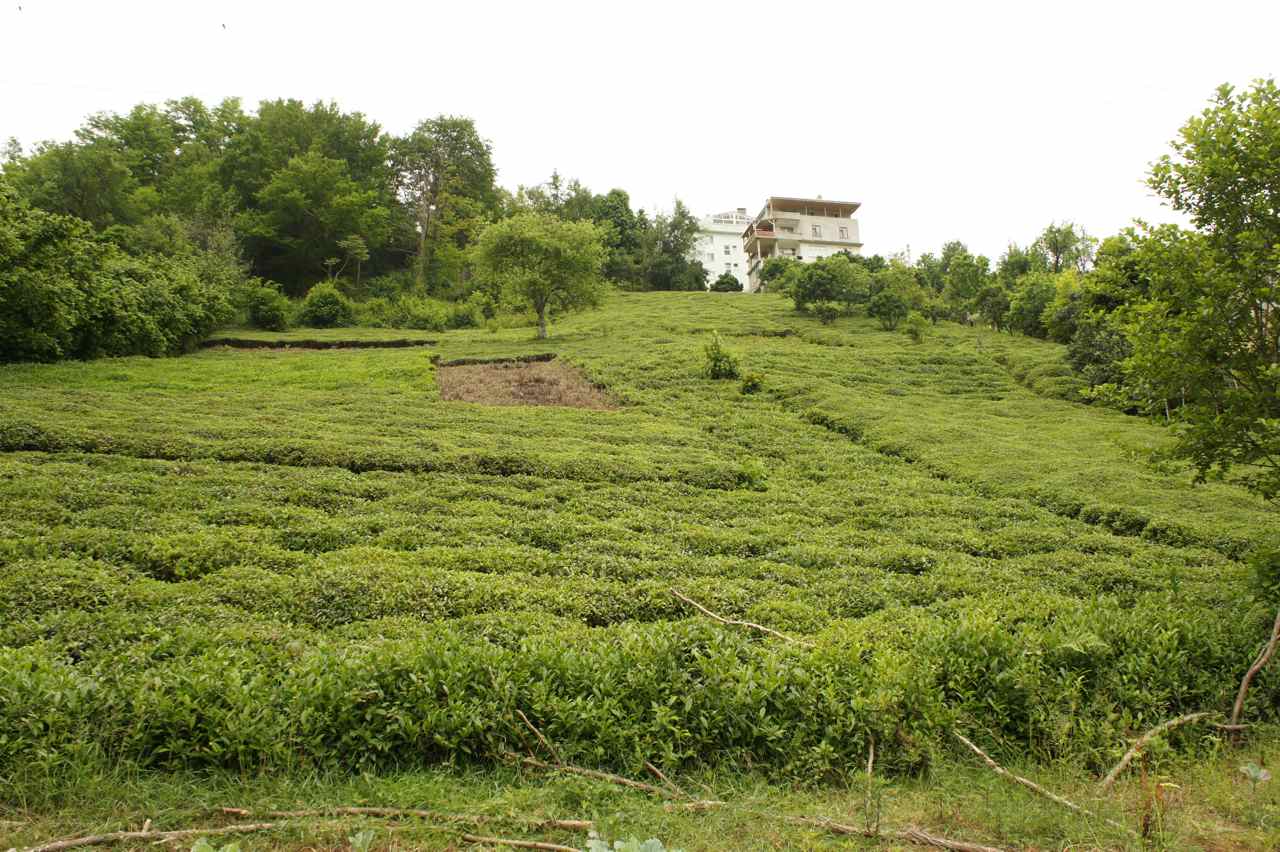 Bread is called ”ekmek” in Turkish and we have started to call it that when we speak to each other. ”Please pass me some ekmek” or ”do we need to buy any ekmek?” are phrases we use among ourselves. Ever since we left Istanbul we have passed bakeries with signs telling that they sell ”Trabzon Ekmek”. It must be something special and when we were in Trabzon we finally found out what it was. Trabzon bread is a huge round loaf of bread that is as big as at least 5 normal loaves. Since we couldn’t eat that much ourselves and thus never bought any. We were however told it has a slightly sour taste and stays fresh longer than normal bread. Maybe it’s made of sourdough…

The ride east from Trabzon was very smooth and we proceeded at high speed and when we found a bakery that sold small size Trabzon breads we immediately stopped to buy some. We couldn’t leave Trabzon without having tried the famous Trabzon Ekmek… 🙂

Whenever we stay at a hotel we stock up on those little jam, butter and hazelnut packages that are usually provided at the breakfast buffets. They are perfect for our needs since they are (1) free, (2) portion size, (3) hard to break and (4) if one breaks only a little jam is spread around in our luggage. 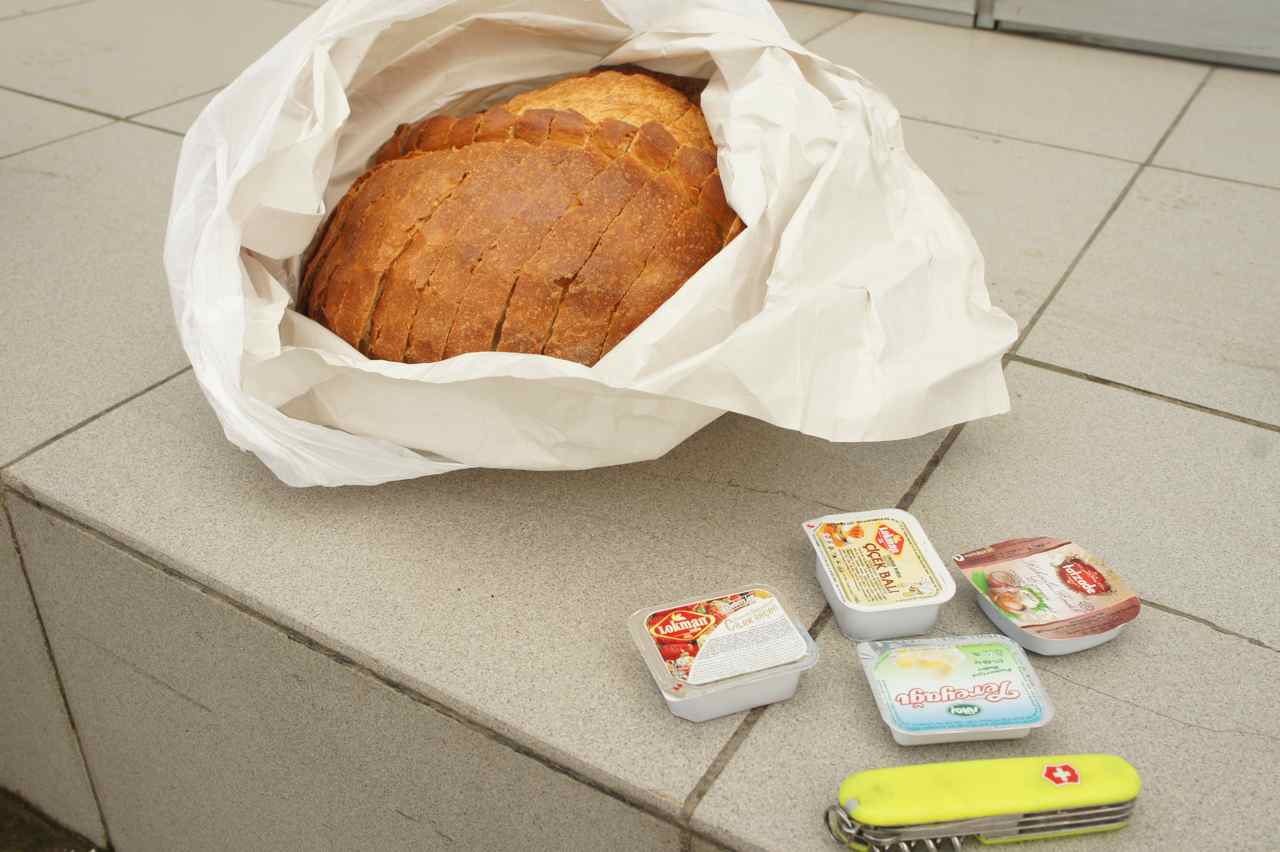 A small size Trabzon bread and jam from the hotel

After having ridden for a few hours we decided it was time for lunch and stopped at a gas station. We sat down outside and started to eat our Trabzon bread with butter and jam from the hotel when the gas station attendant saw us and hurried to serve us some tea. This kind of generosity and hospitality is something we will always associate Turkey with.

Just like elsewhere in the world there are often exercise equipments placed in Turkish parks and public places. When riding east on the big Black Sea highway we bumped into this place. Not a park and only a two different training equipment, but with a nice view of the Black Sea. 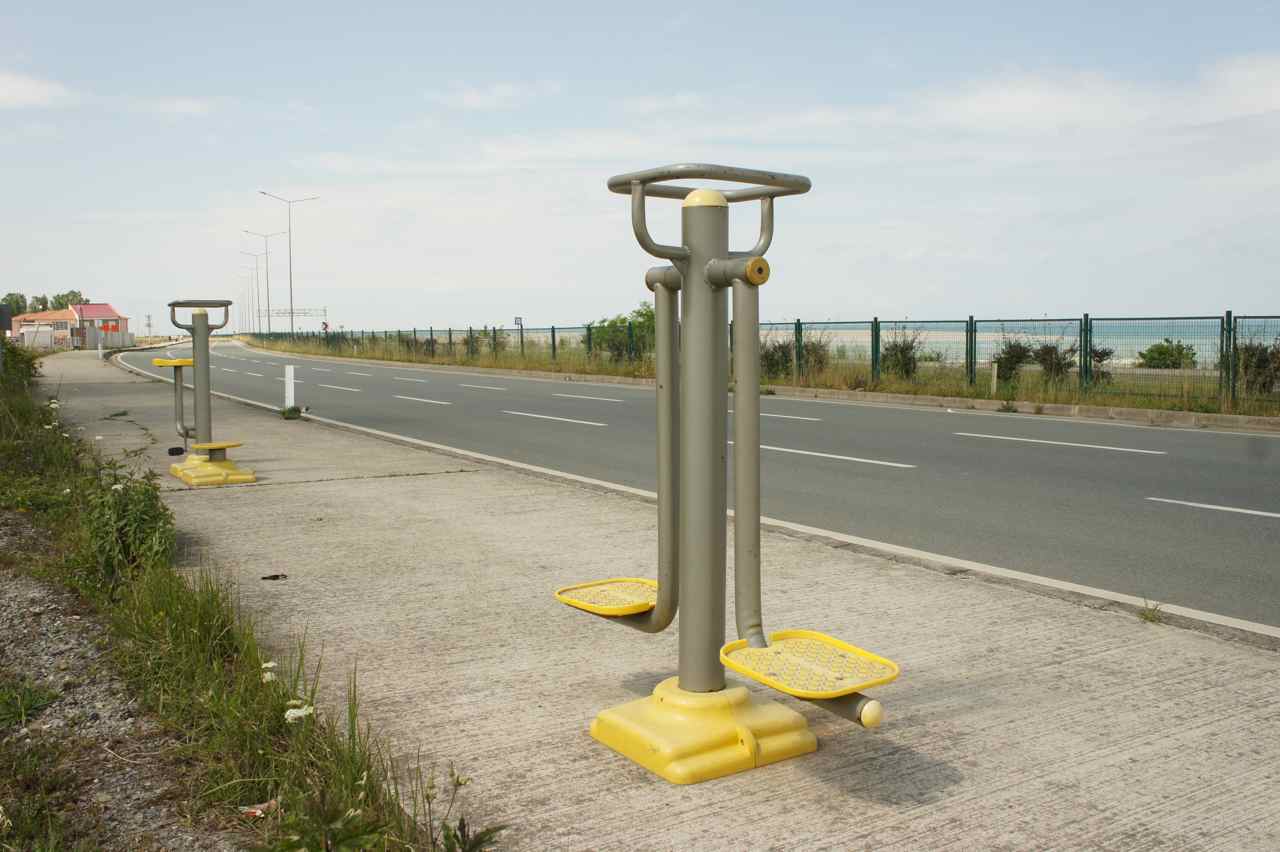 In central Europe most gas stations had a open wifi network without password for visitors to use. In Turkey they also have wifi internet, but the staff at the gas stations rarely know the password. We wanted to get in touch with our friends in Zonguldak to arrange for our arrival to Hopa, but we had problems finding any internet connection. The sms text messages we sent didn’t seem to get through either so we decided to try to find a camping spot instead. 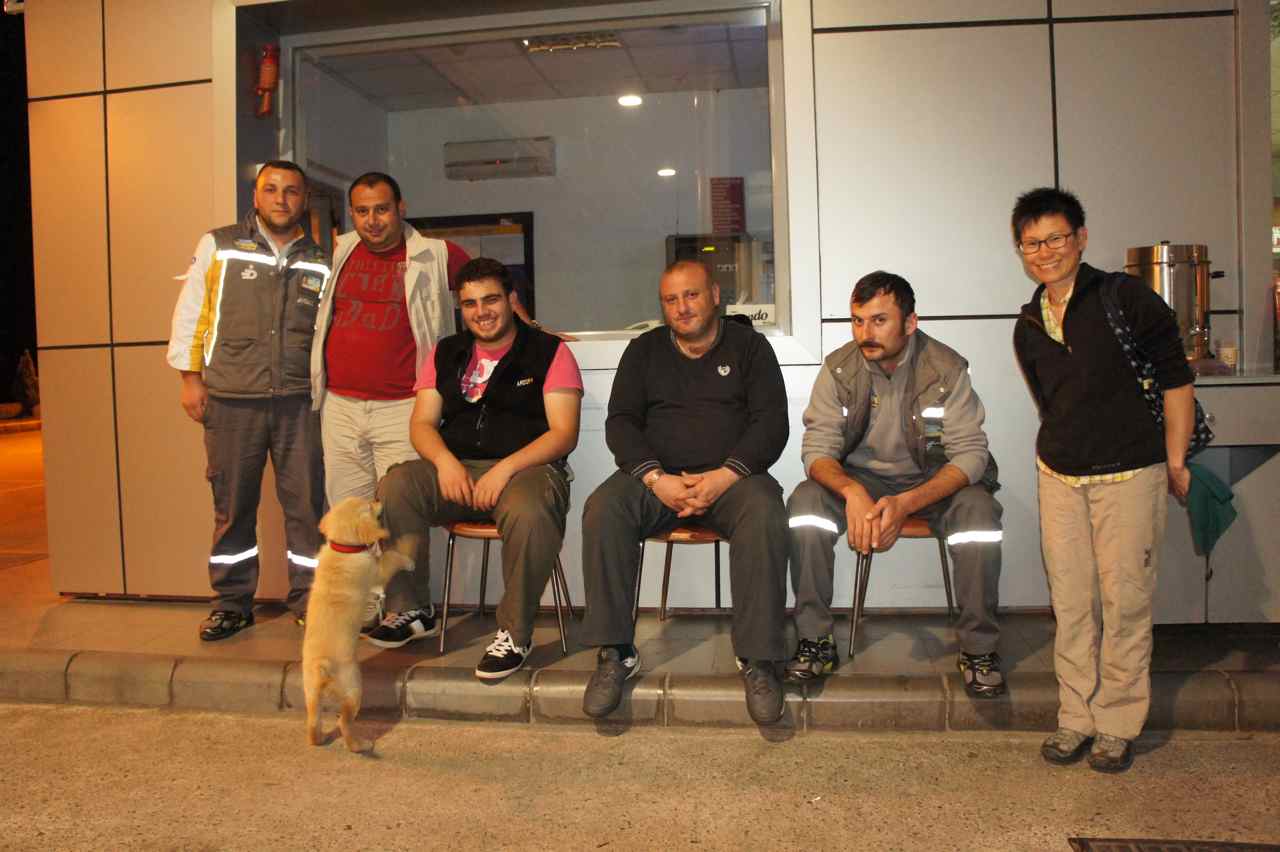 We went in to a gas station some 35 km short of Hopa in hope of finding a spot to pitch our tent. We were soon surrounded by staff and some hangarounds and a few minutes later we had a glass of tea each in our hands. One of the guys spoke very good english and he asked us where we were going and where we would stay tonight. We said we wanted to pitch our tent and asked if it was possible somewhere around the station. A few minutes later the manager came out and showed us where we could put it. 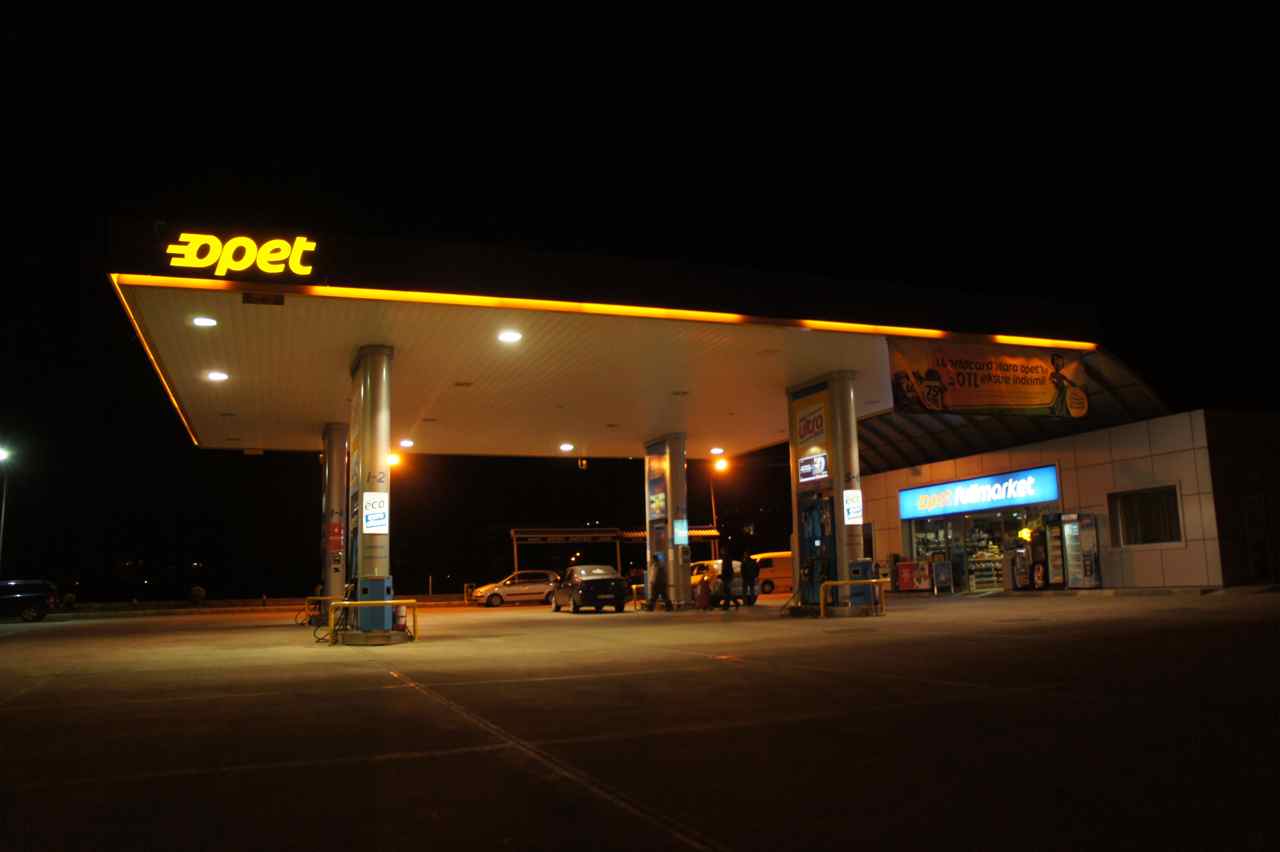 Most gas stations in Turkey have a room for prayer and so did this one, but here it was a rather unusual place. The station had brought in an more than 100 year old barn from the mountains that used to a corn storage. 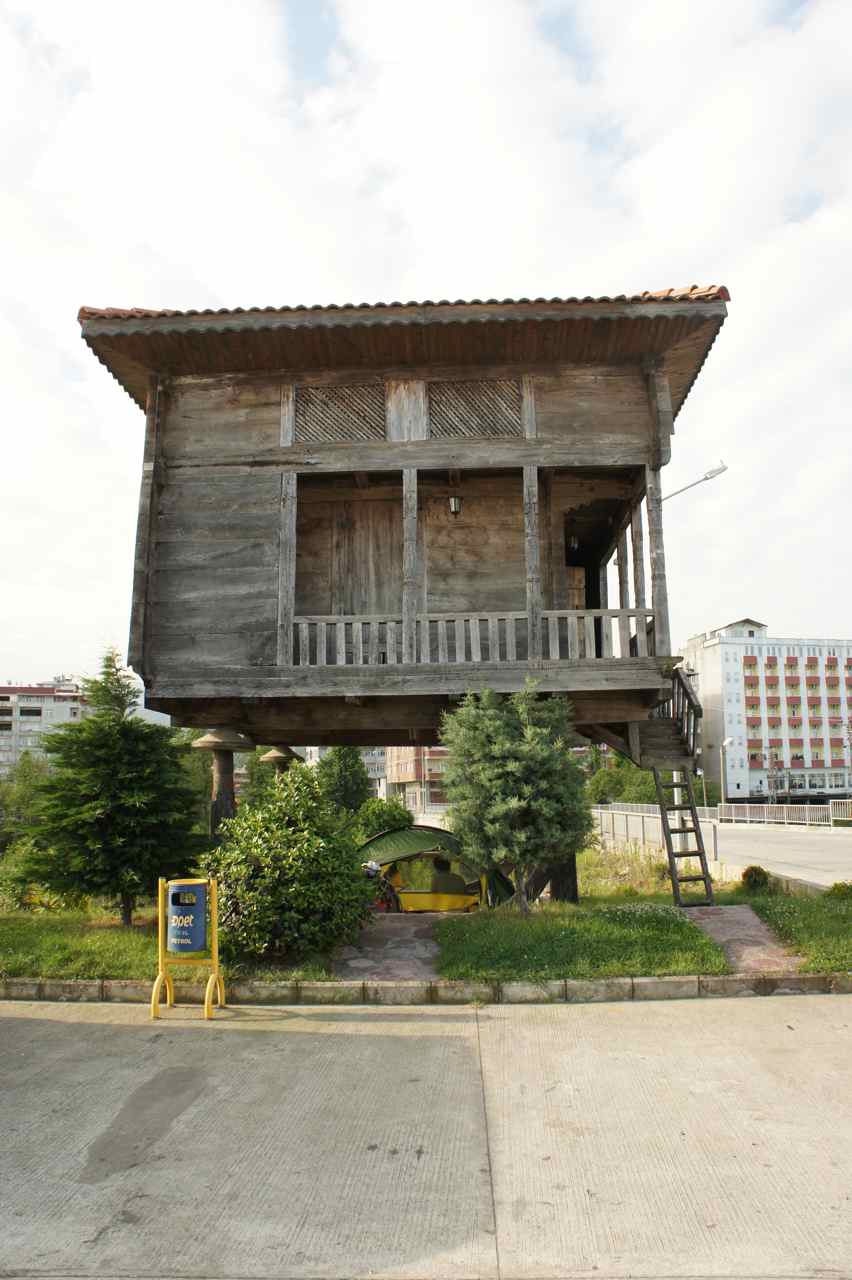 Old corn barn turned into room for prayer. Note our tent under it. Wej is sitting inside it.

The century old barn on pillars with beautiful details carved into the old wood had now been turned into a room for prayer and we were told to camp under it. 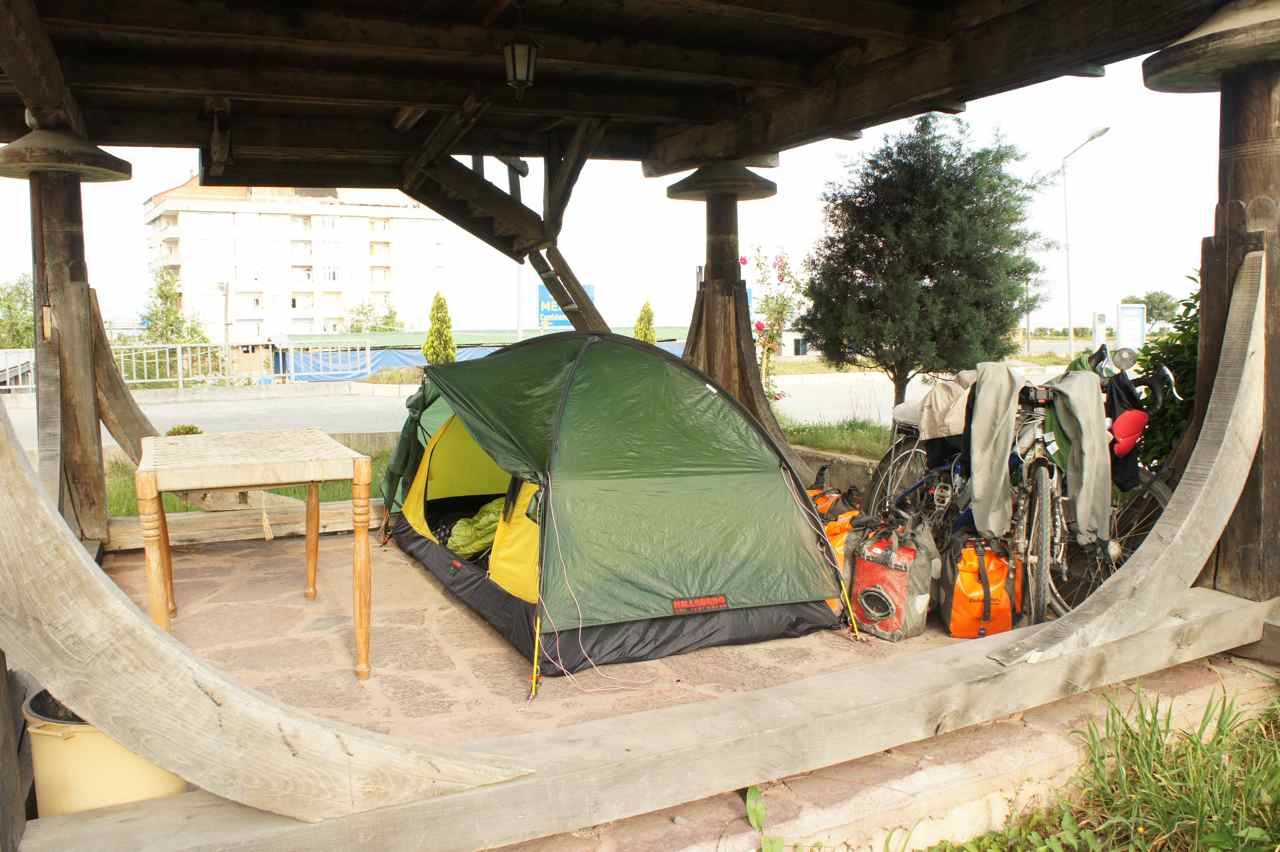 Camping under the to prayer room turned corn barn

We were then asked if we had eaten any dinner yet and when we replied no, Hakan (the guy who spoke English) invited us to his home for dinner. We all jumped into his car and went to his house to have a wonderful dinner that his wife had prepared. Turkish hospitality again…… 🙂 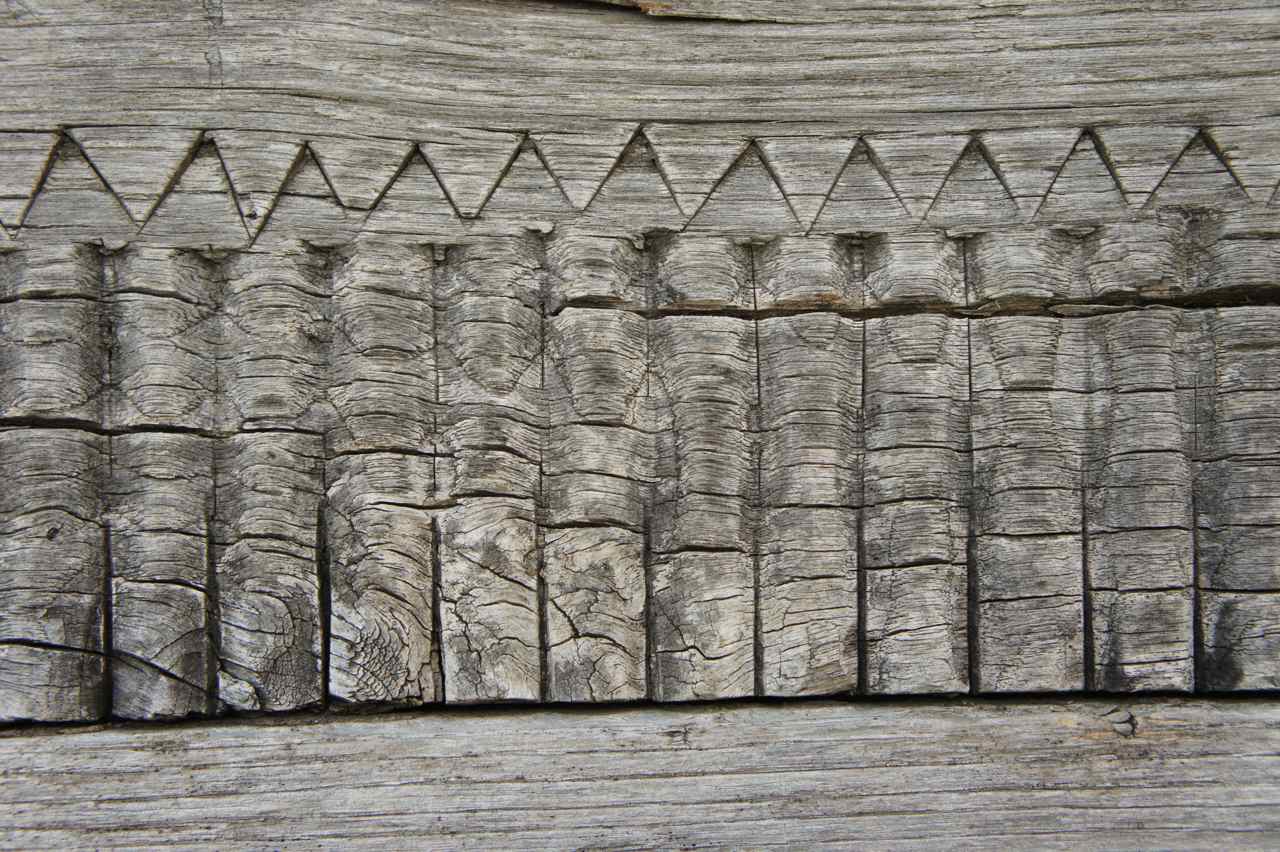 Detail from the corn barn

The following morning we had the what was left of our Trabzon ekmek for breakfast and headed east. Since we couldn’t get in touch with our friends’ friend in Hopa we decided to continue towards Batumi in Georgia.

Turkish desserts are wonderful and when we saw a cafe we stopped to have a last taste of it before leaving Turkey. Next to the cafe was a bakery that was run by the same owner who invited us to come and take a look. 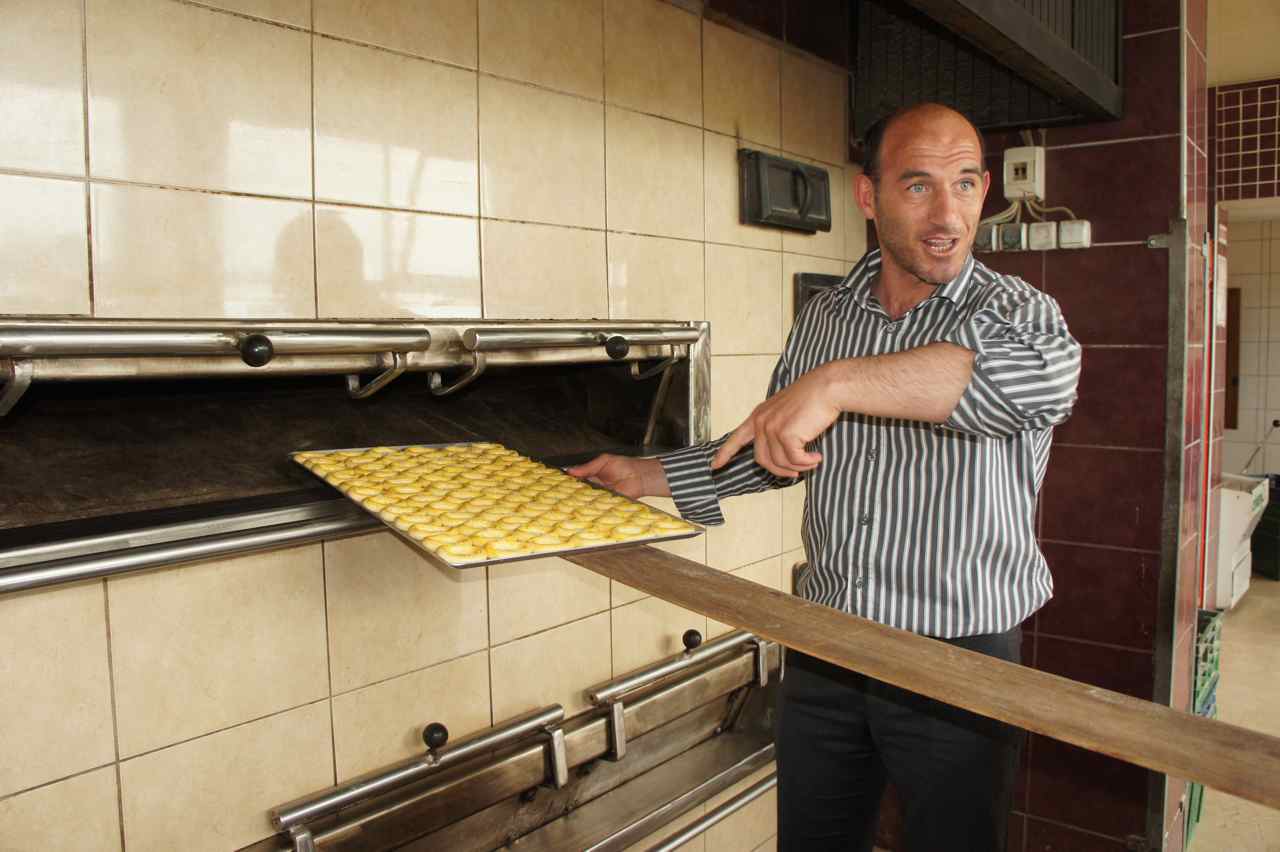 It was now time to leave Turkey which is a country we have started to like very much and that we certainly will return to both to visit friends and travel. We have liked the people, the hospitality we have received, the food and the interesting sights we have seen. 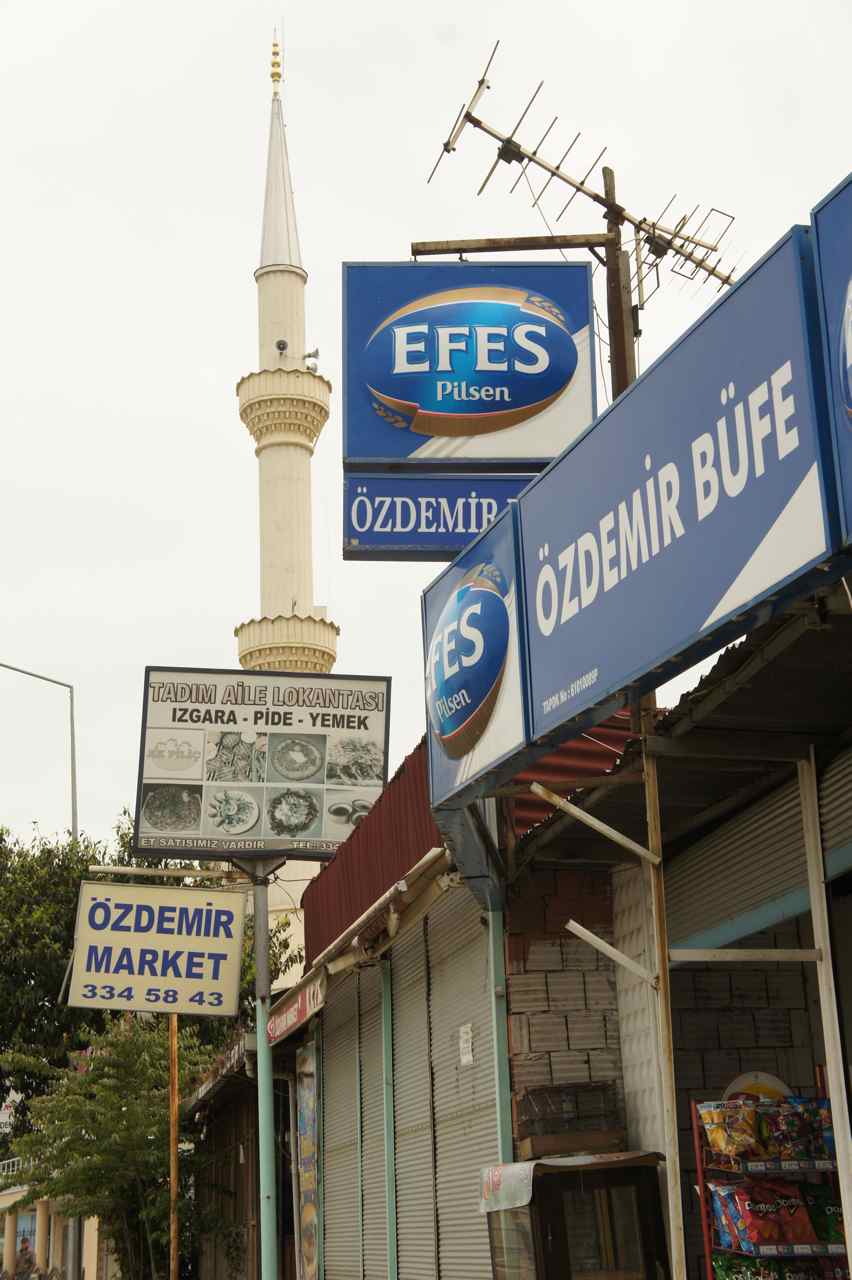 The variation that makes Turkey rich. A minaret and a beer shop side by side.

The border area to Georgia looked like an airport terminal and we stopped to buy some chocolate to finish our remaining turkish currency. 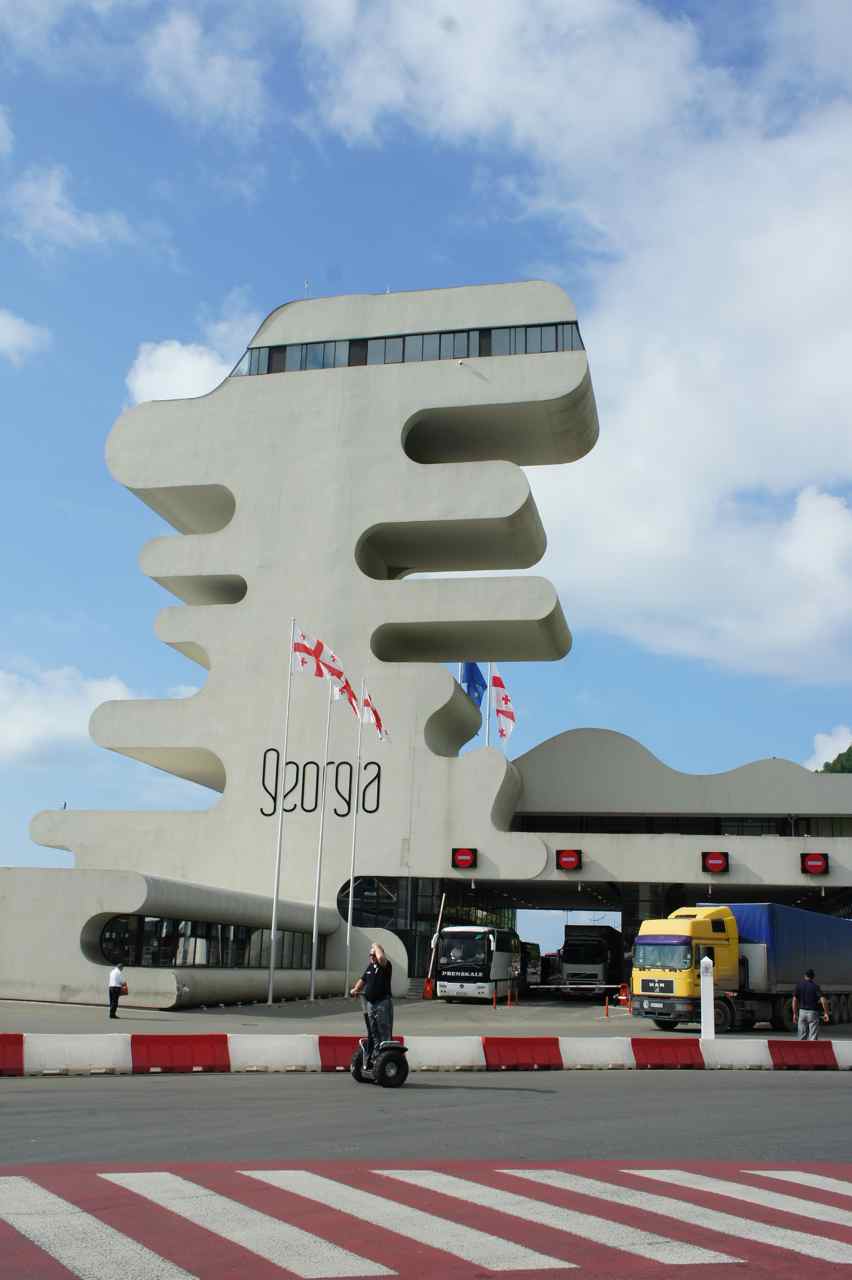 Normally when we pass a border we choose the lane the cars go rather than the lane for trucks. This time we were told to through the corridor where the bus passengers walk. There was hardly anybody there so we cycled through it. See the short video clip below.


Batumi was only 16 km from the border and it was a quick ride on a road that was a lot smaller and not as well maintained as the one we had been riding on in Turkey. Only a few kilometers after the border we passed Gonyo which is a millenium old Roman fortification. It looked very well preserved and resembled any any of the roman forts in the Asterix cartons. Unfortunately it was closed so we continued towards Batumi city. 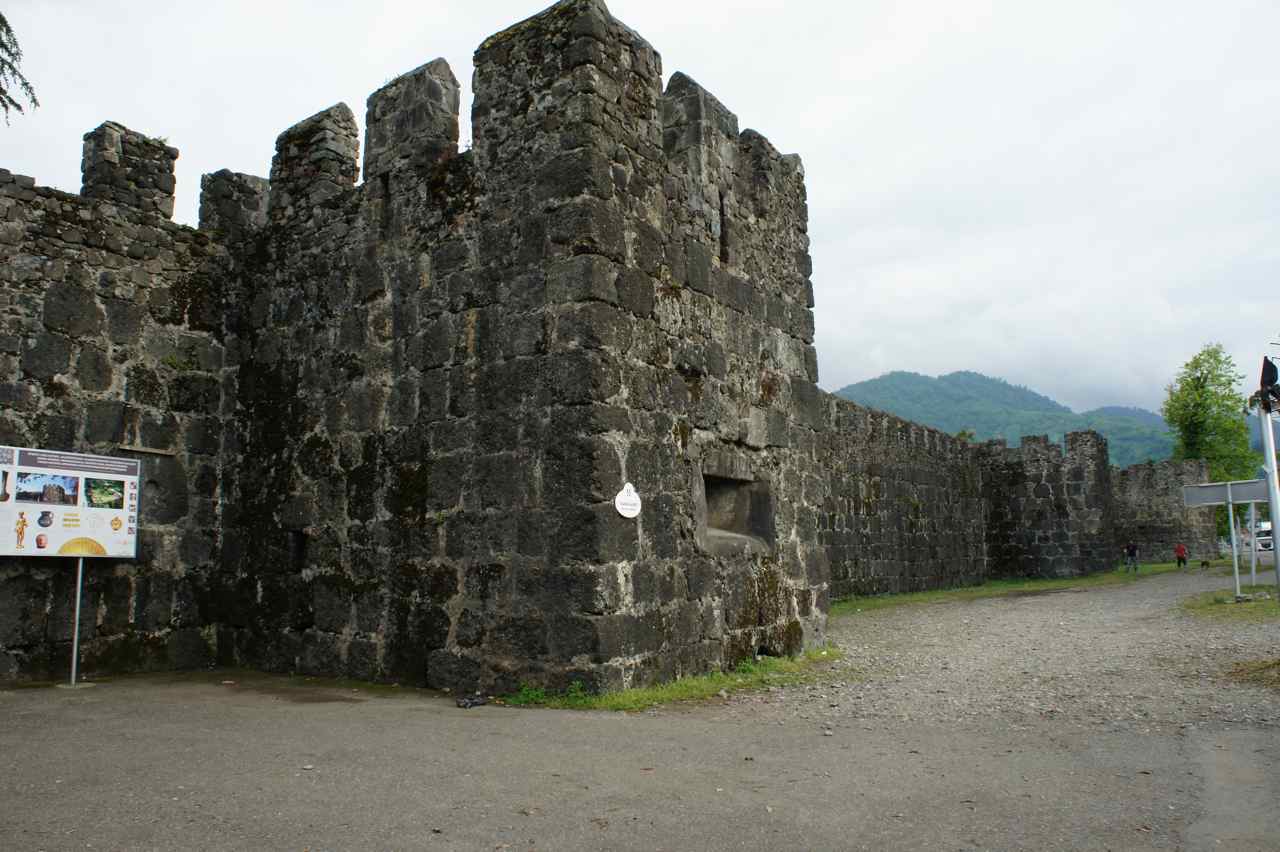 Where are Asterix and Obelix???

We aimed straight for the Globus Hostel in the city center where we knew Sawang Thongdee who is another thai cyclist was staying. After checking in to a 20 bed dormitory we went out to have dinner with Sawang and it was very nice to meet someone from Thailand again.

Sawang is an experienced cyclist and has cycled the Karakhoram Highway, Iran, China, Pakistan, Centralasia, Turkey, Armenia and many more countries we dream about and now he was spending two months to dig deep into Georgia. 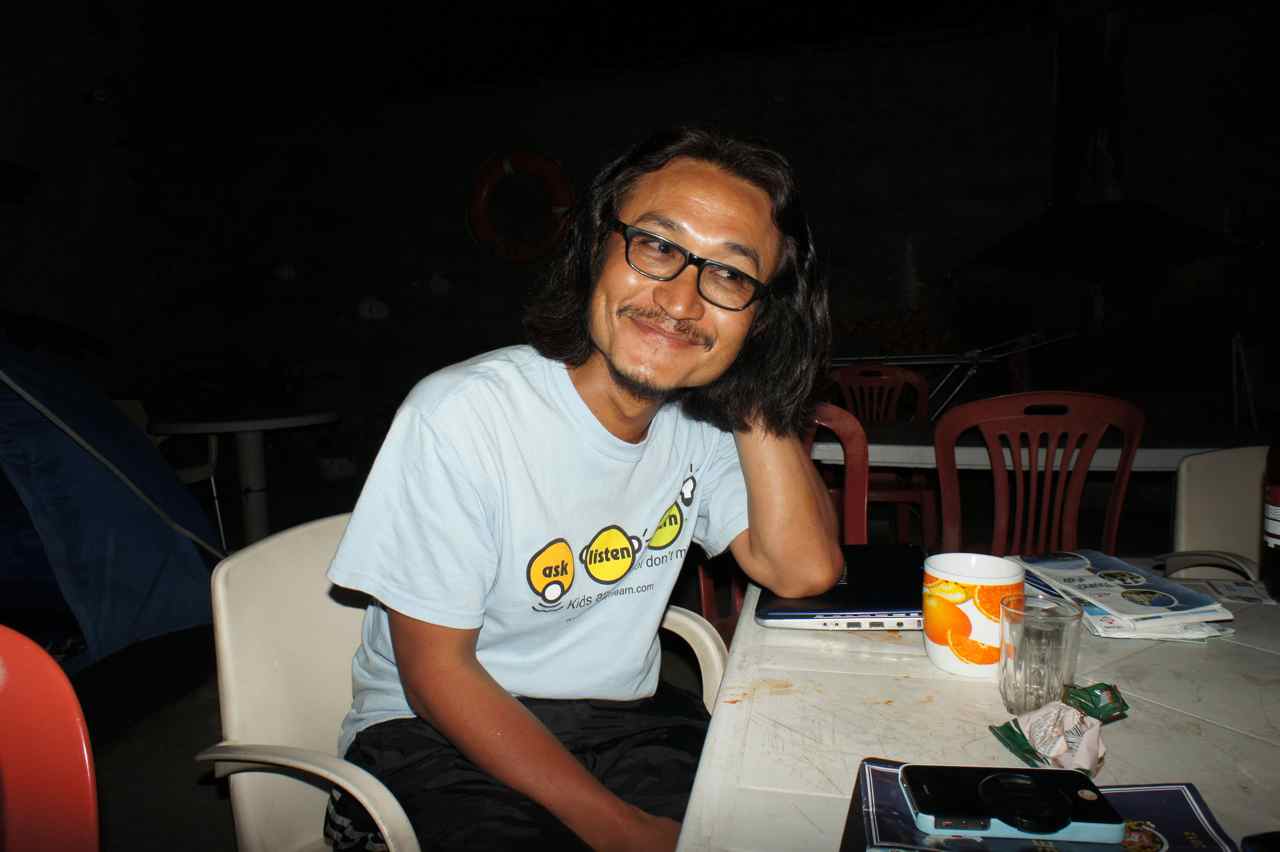 Sawang had already been in town for a couple of days after a side tour up to the great Caukasus mountains and he brought us to a nearby restaurant where we could have some interesting local Georgian food. For Wej it was great to sit down to talk to someone from her own home country and although I am not Thai, when meeting Sawang I got the feeling as when running into a countryman at a far away place overseas. 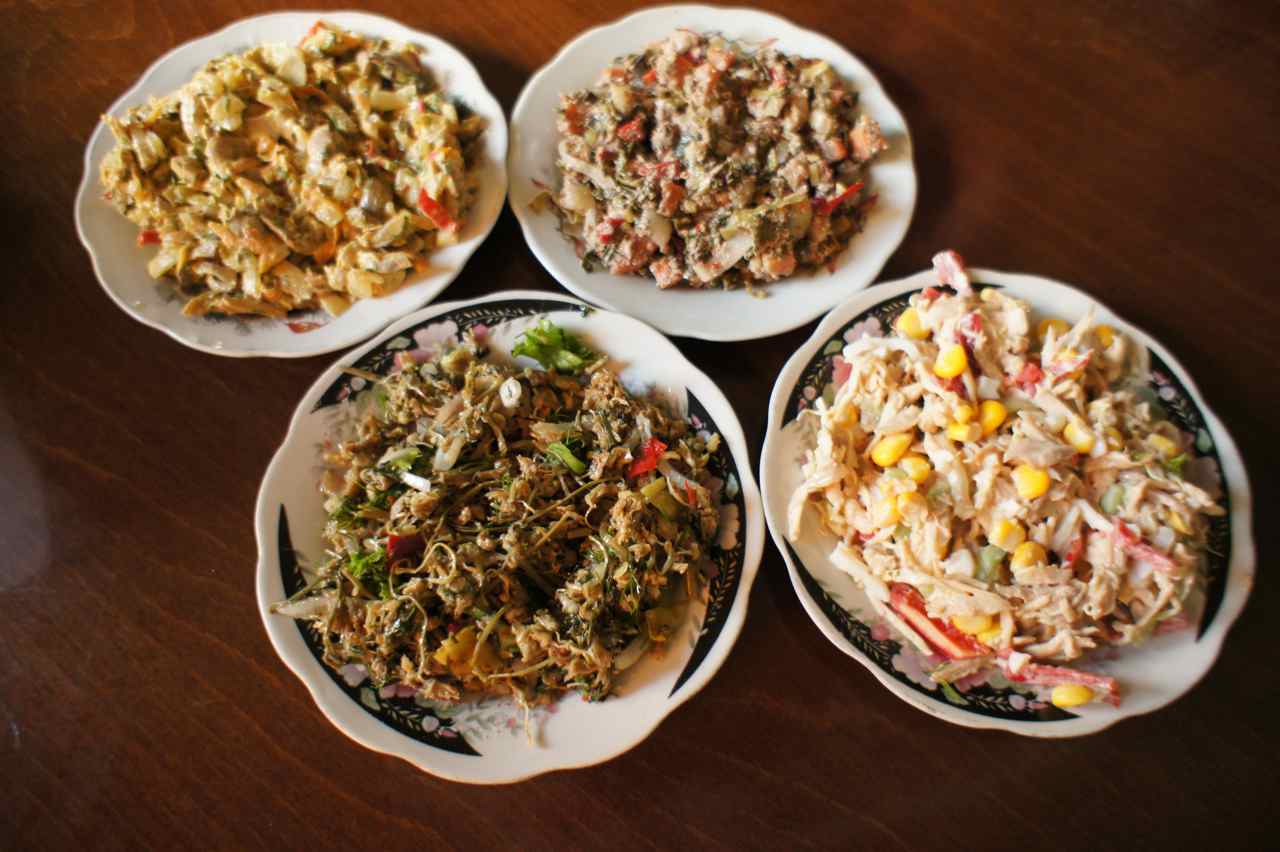 Georgian sallads. Tasted wonderful and we hope will have more soon.

Pork is not eaten in Turkey, but in Georgia there is plenty of it and the georgians know how to cook it…. 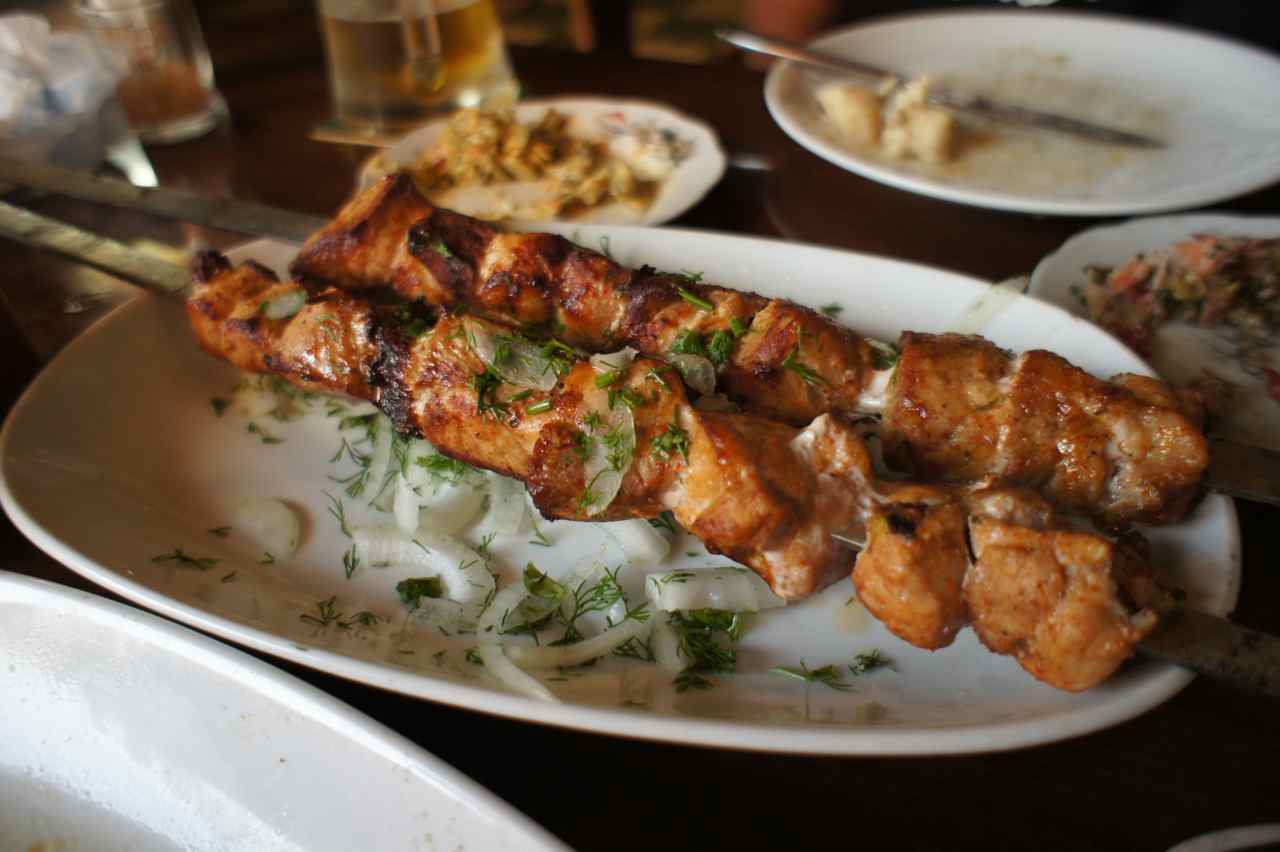 We have now entered the visa hassle zone. The number one discussion topic among fellow travelers is how and where to obtain visas. We haven’t needed any visas so far, but we we would need one for Azerbadjan which has tightened its visa policy during the last few years. However, the rumours said that getting a visa at the consulate in Batumi would be easy and the following morning we went to the consulate to try our luck.

The guy at the consulate was very laid back. He sat smoking and playing computer games in his little office when we arrived. When asked what documentation we needed he told us, 1 photo, 1 passport copy, the application form and 150 GEL (approx. 65 €). He told us to come back on Friday and we asked if we could get it on Thursday instead and then he replied ”sure”.

When picking up the visa he didn’t even look at our application forms. He asked what day we wanted to go, filled in the sticker and put it in our passports. Simple and no need of expensive and hard to get letters of invitation.

We have then spent two days relaxing and discovering Batumi which is filled of hotels and resorts. Now it is a bit empty, but when the summer season starts it will be very crowded. I don’t like swimming in cold water and when we stepped into the Black Sea in Sile a few weeks ago the water was definately too cold to swim in. Now it had got better and I went into the water of the Black Sea for the first time ever.

The beach in Batumi consists of small round stones. Many people prefer sand but I prefer these stones because you won’t get any sand between your toes or into your ears 🙂 They were however very hot to lay on during the mid day heat. 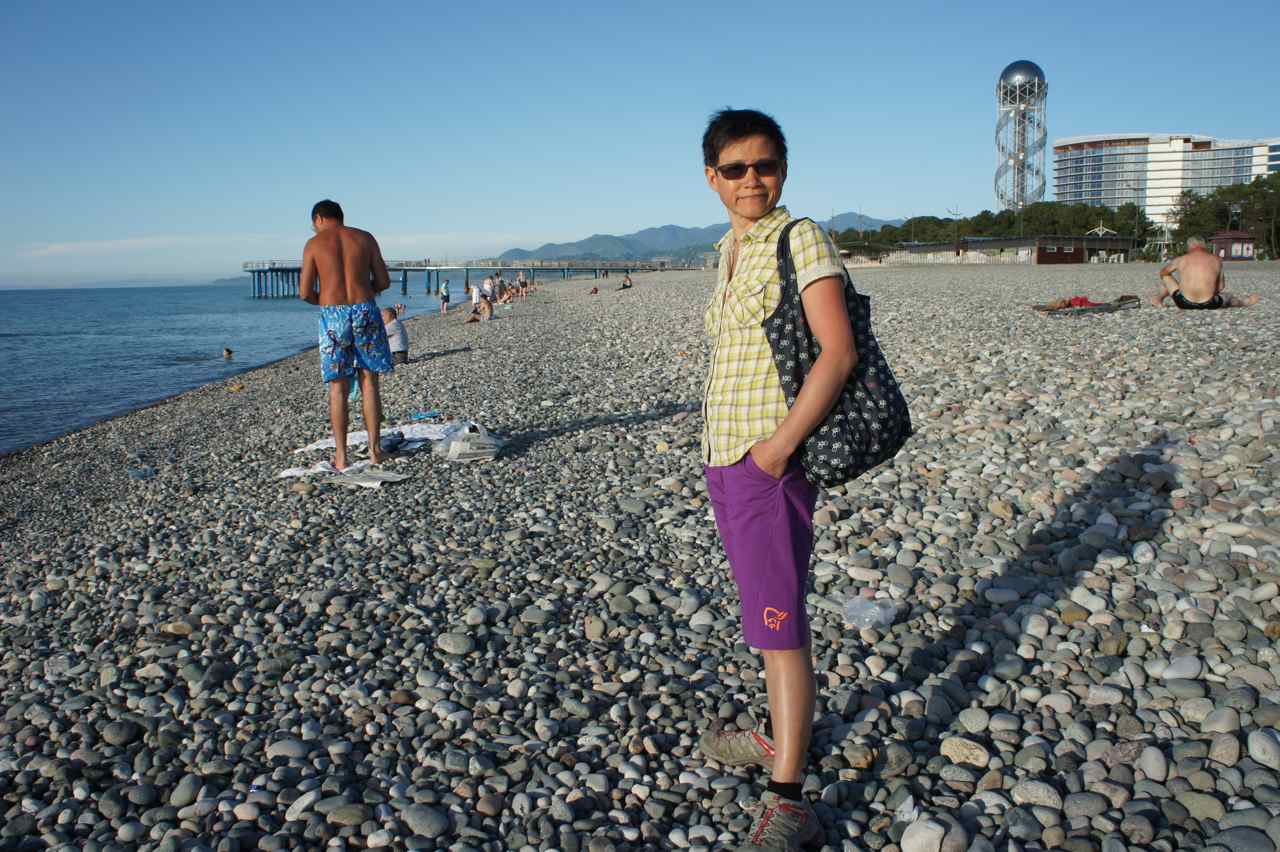 On the beach in Batumi 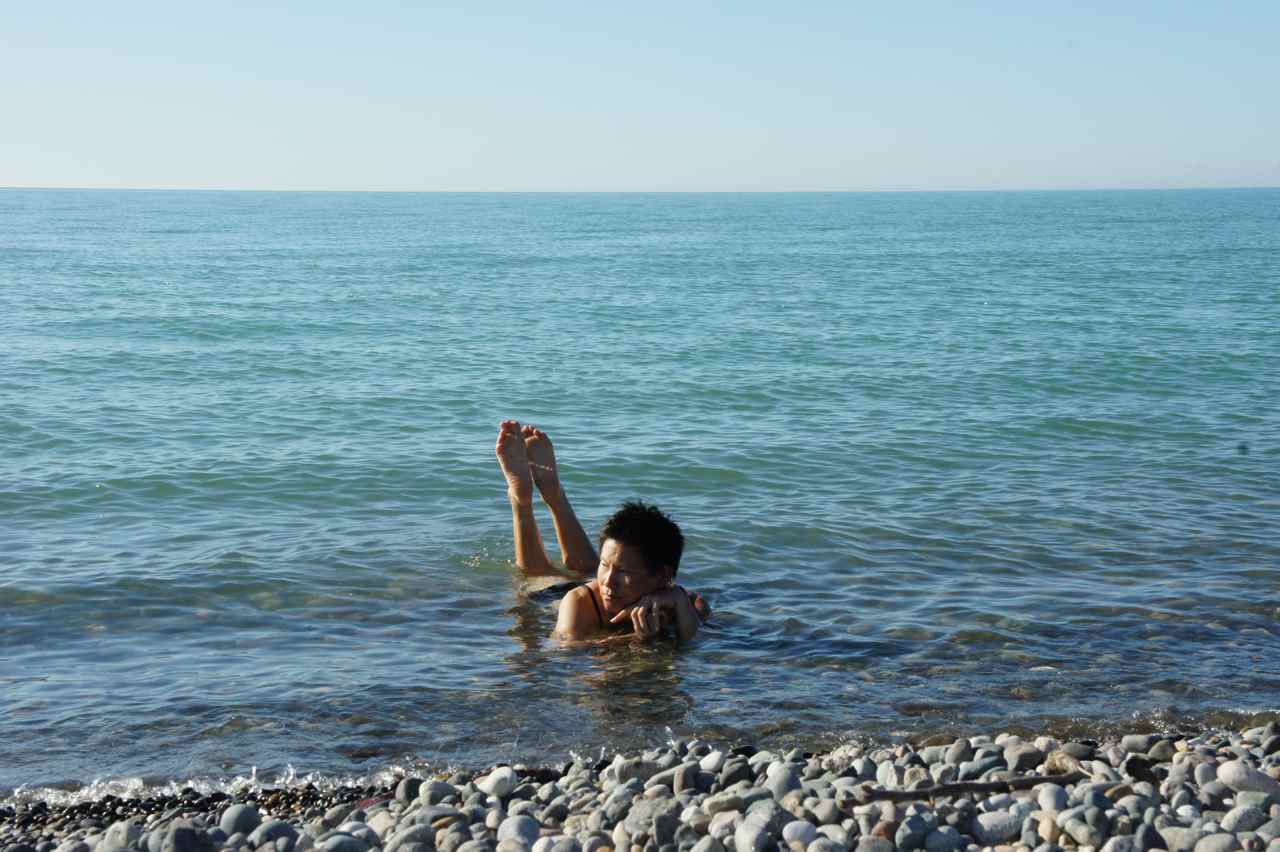 Wej cooling down in the water of the Black Sea 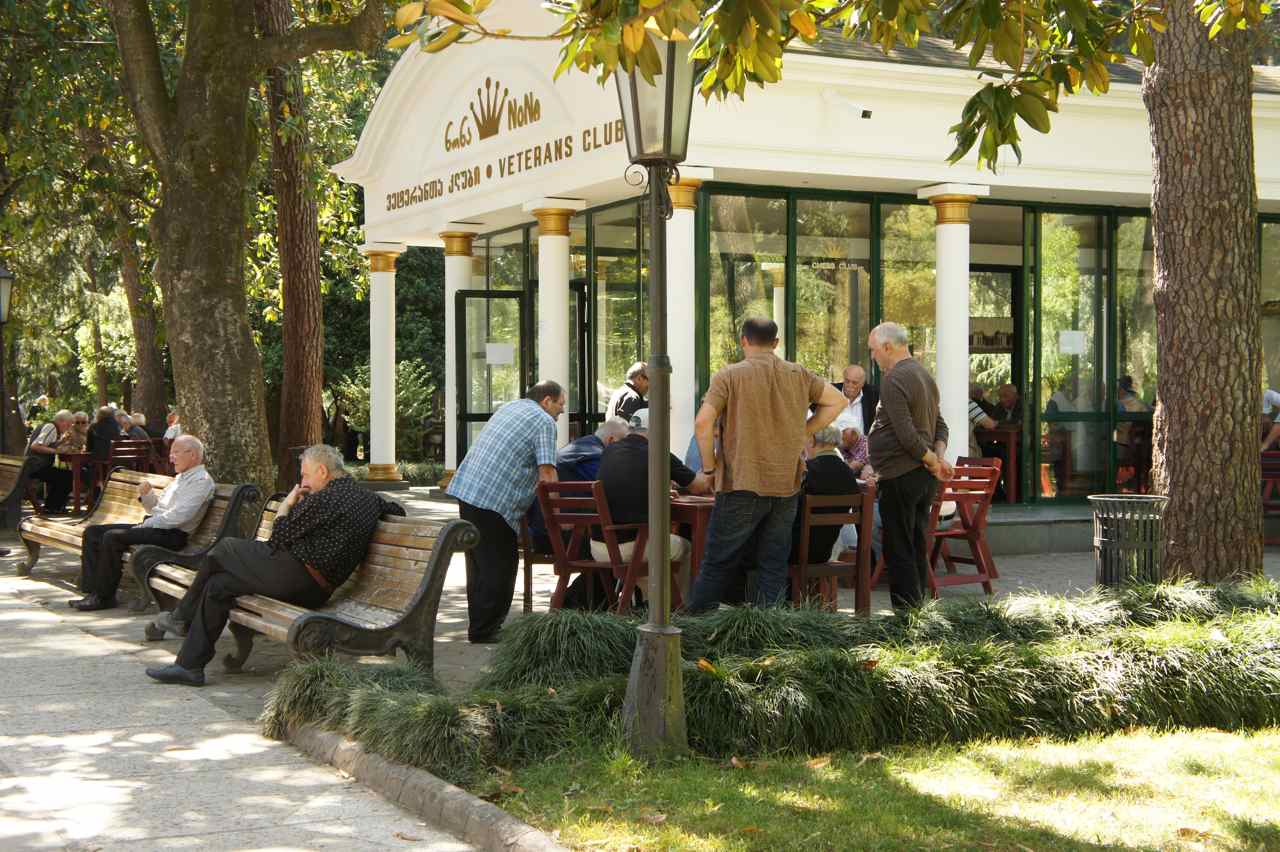 Between the city center and the beach is a long park called “Boulevard”. There are restaurants and a chess club 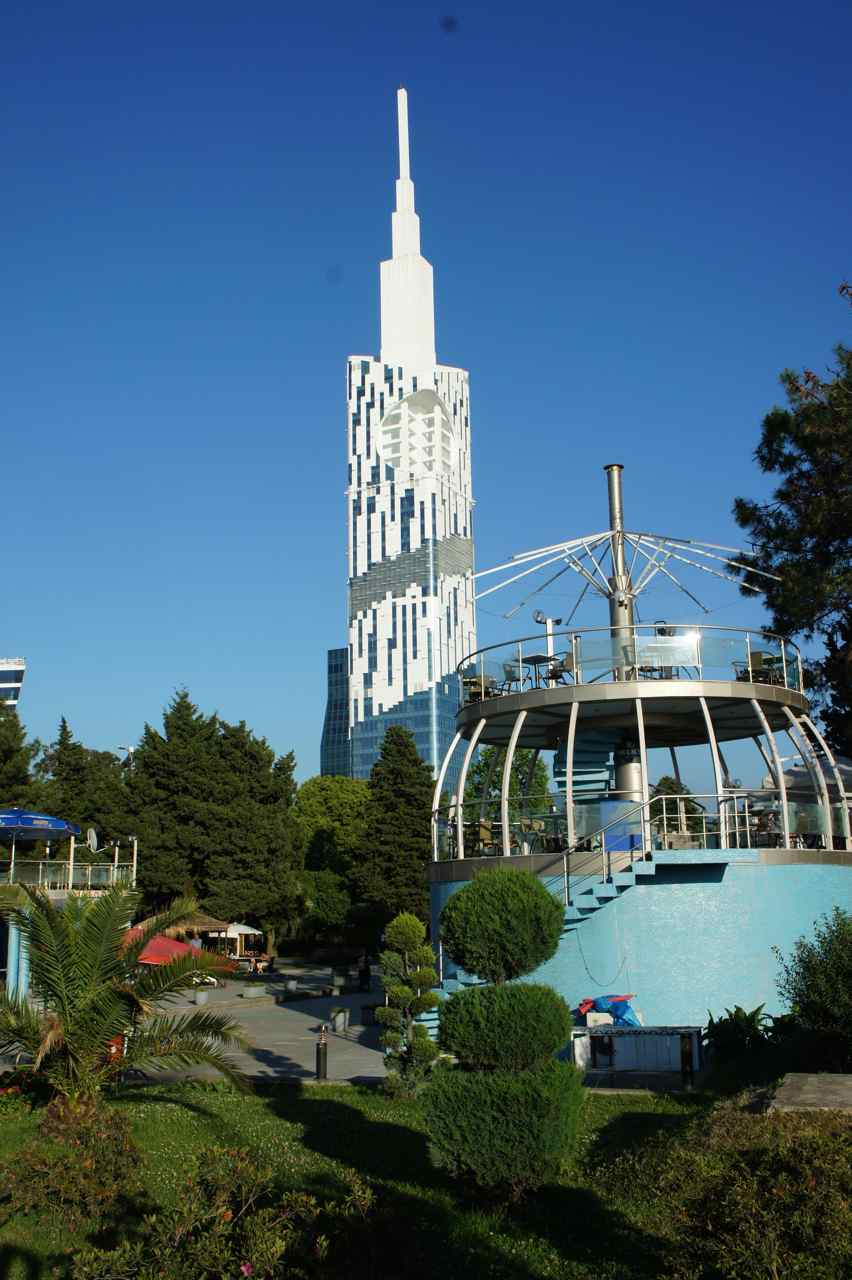 A skyskraper not far from the beach. 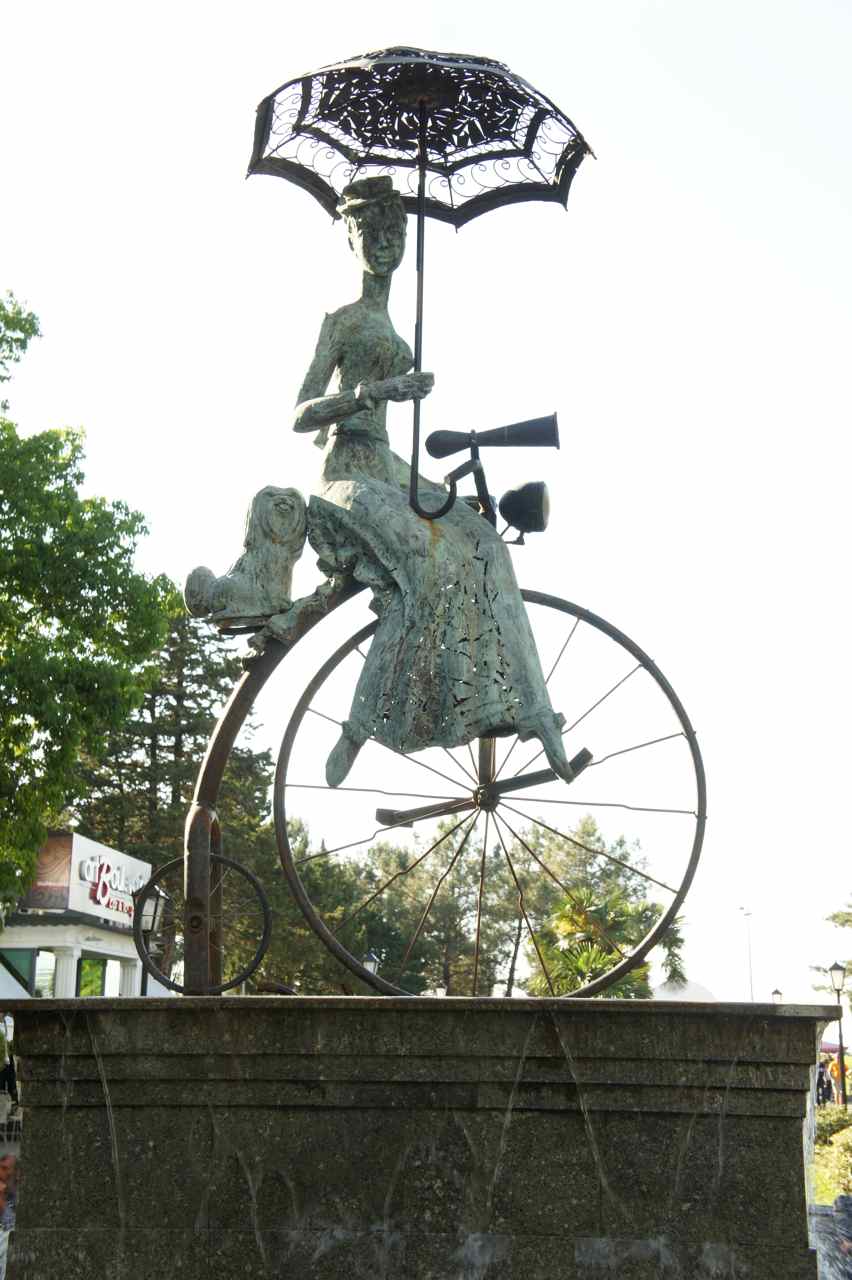 We are not the only ones who have come here by bicycle. Statue in the Boulevard park. 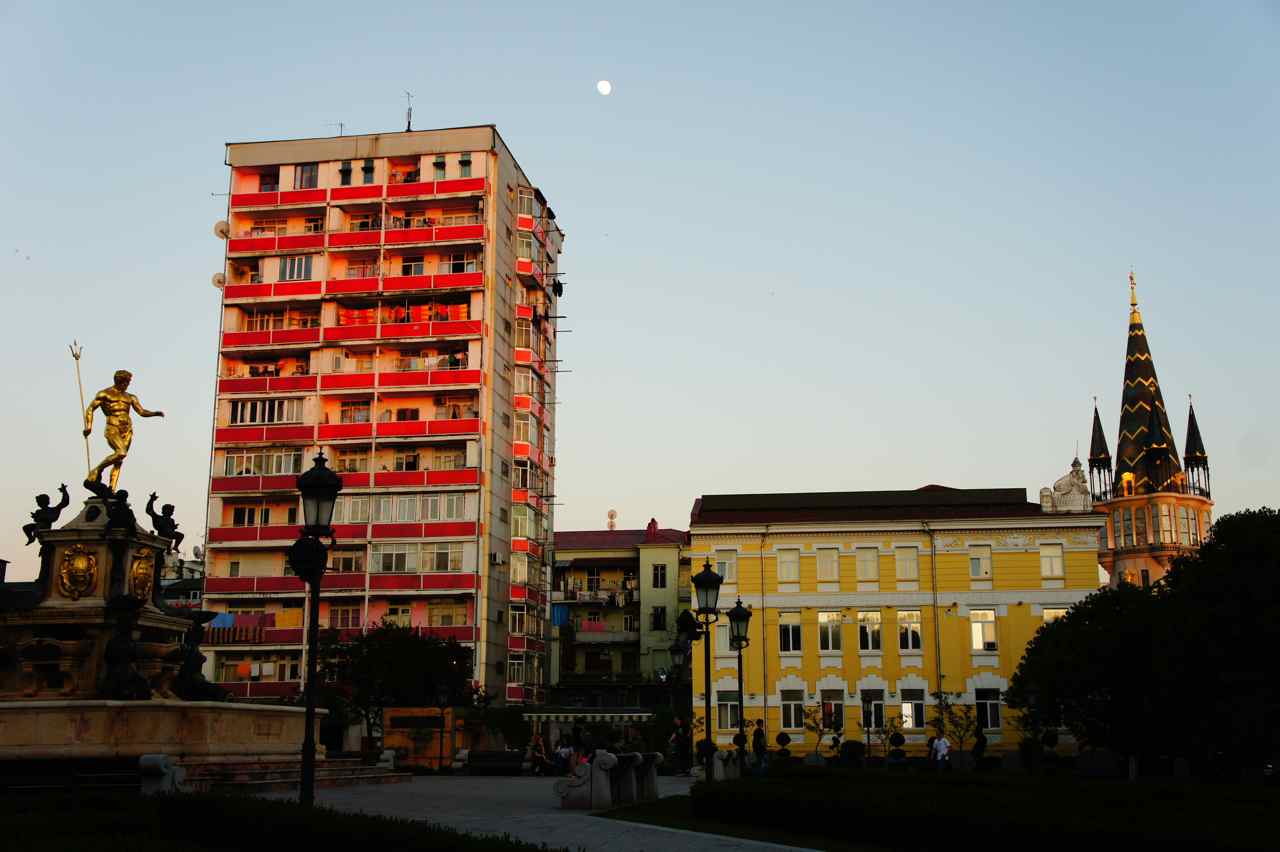 Colorful buildings in the center 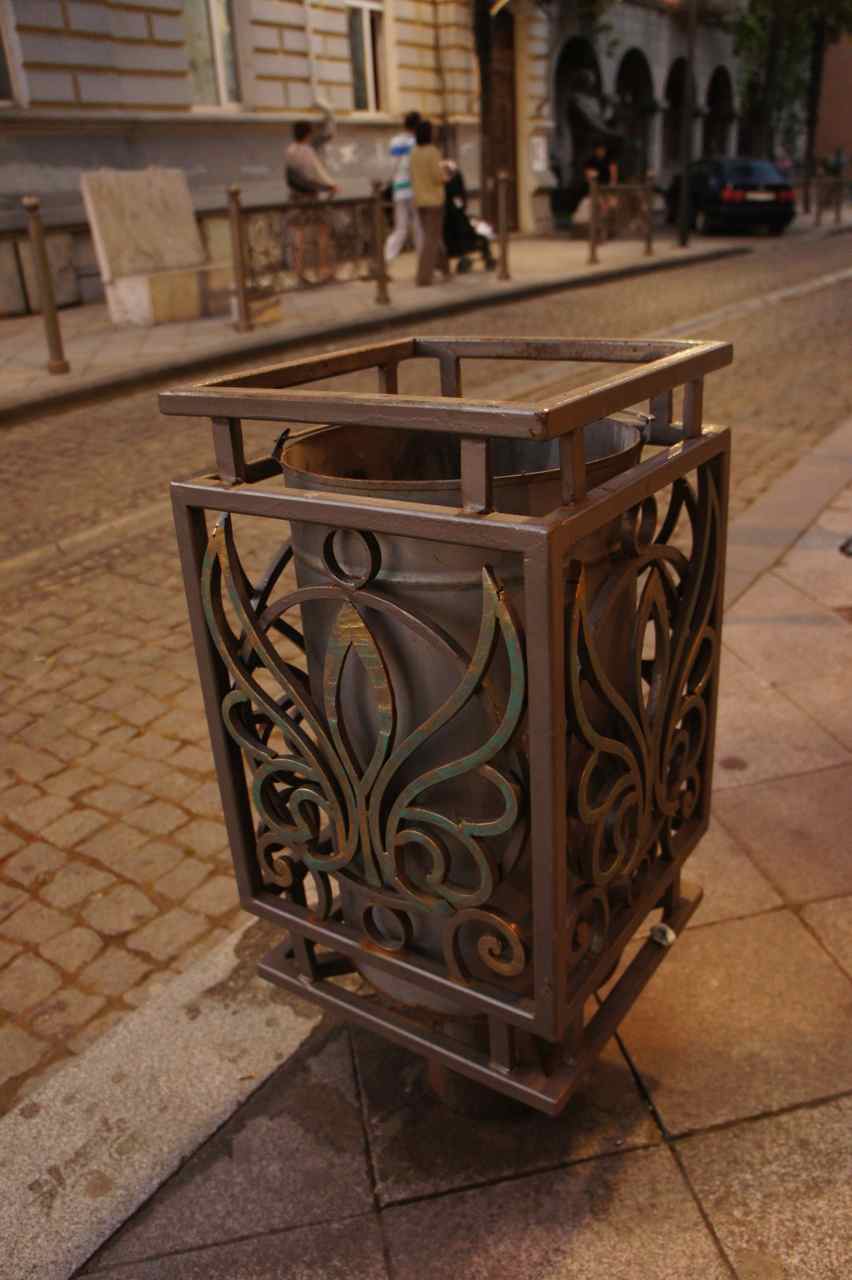 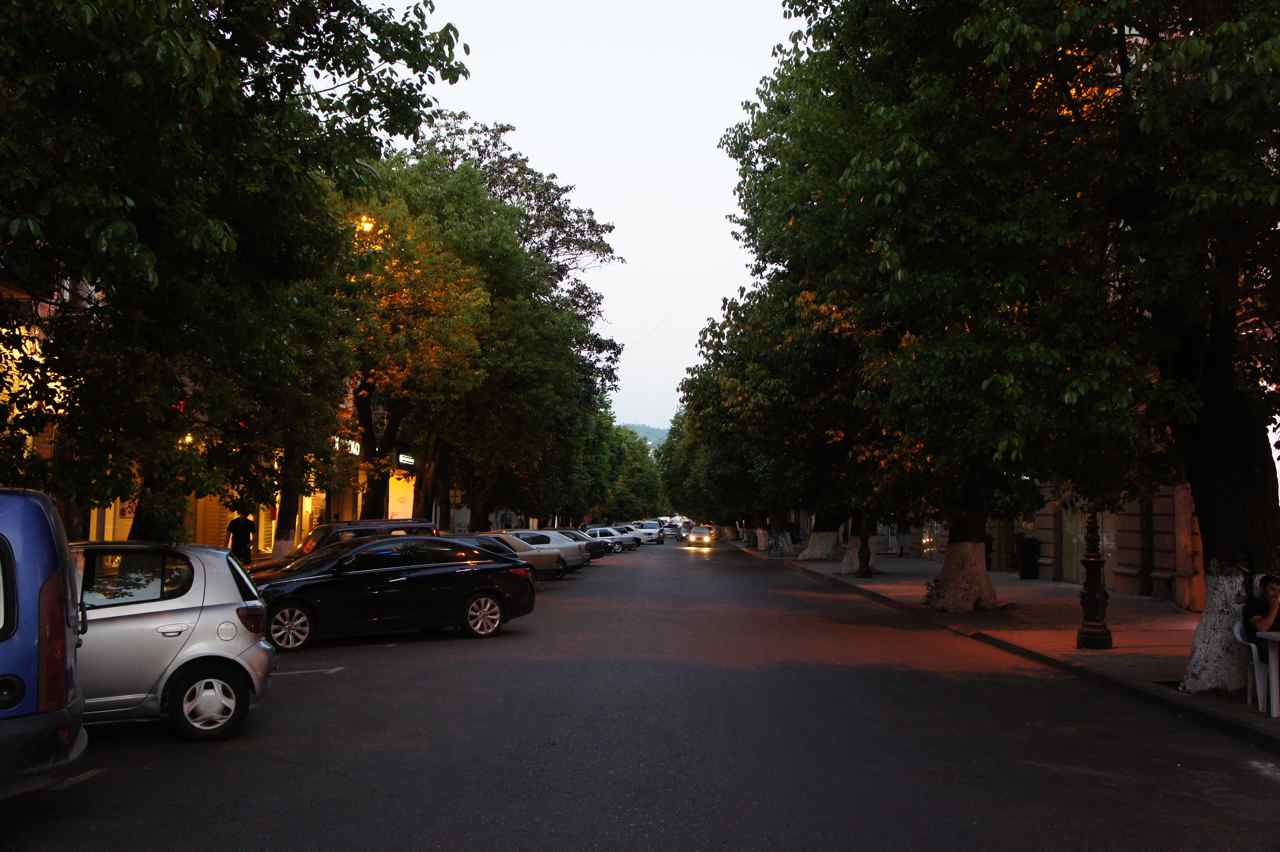 A Batumi street at dusk