When Greta’s flight passed over our guesthouse I was busy cleaning and checking my bicycle. It was nice to get back its original colours from underneath all the layers of dust from northern Laos and south China. What wasn’t as nice was to discover a broken spoke in my rear wheel, but I am glad that I discovered it then and not when we were packing to leave the following morning.

The two broken spokes I have previously got on this tour have both occured when hotel staff have moved my locked bike without lifting the rear wheel. I don’t know if this was the case this time, but at least I got to practise how to change spokes and true a wheel without proper tools.

We have read many blogs telling about how hard it is to cycle in Laos. The road is supposed to be bad, the mountains tall and steep and the temperature like a pizza oven. When cycling towards Luang Prabang we started to think that those accounts were severely exaggerated – we started to think that cycling through Laos was like a walk in the park…… Then came the climbs south of Luang Prabang….

In the deserts of western China we could tick off our first no.2, i.e. +200 km in a day. On the first day after leaving Luang Prabang we could tick of the second no. 2 which is climbing more than 2000 meter in a day.

After uphill comes downhill and the following day was going to be fun. That was at least the plan until I woke up in the middle of the night and felt all my joints were stiff and my back was aching. All of these are classic symptoms that tell me I will soon get ill and when I woke up in the morning I didn’t feel well at all.

It took ages for me to pack my stuff and we delayed our departure a couple of times until we around mid day decided to not cycle. I went back to bed and spent the rest of the day sleeping or reading my book.

I need to apply for a visa to Thailand and since it takes two working days and we have decided to cross the border on Saturday I had to apply no later than on Thursday morning.
The unplanned restday wrecked our plans of a nice and gentle ride towards Vientiene and now we had to speed up in order to make up for lost time.

I felt much better after resting for a day but I was still a bit weak. The aim was to cycle 150 km to the town of Vangvien. It went well for about 100 km but when my speedo showed 110 km I completely lost all my power. We stopped at a shop at the far end of a small village to buy a softdrink and discuss what to do.

I got knocked out and slept for an hour behind a shop.

Going back is never an option but I would have needed a pack of hungry wolves behind me to muster enough energy to ride the remaining 35 km. It wasn’t simply going to work. Wej who is a master of communication had already started a conversation with the young lady running the shop. Without telling me she asked the lady if we could pitch our tent somewhere near her house which was behind her shop. The answer was ”no, it’s not necessary because you will sleep in our house tonight”….

The family then fed us and prepared mattresses for us to sleep on in their living room. Meeting complete strangers like this is the best part of this trip and here in Laos it is even better since we are able to talk directly without using dictionaries or body language.

Having dinner in with our host family. Their house is still under construction and will be wonderful once it’s completed.

We were still delayed and it was almost exactly 200 km from our host family’s house to the Thai embassy in Vientiene. It could be possible to cycle in a day but the sun sets so early now that there is simply no time to ride that far before it gets dark. Our plan was then to ride as far as possible or at least 150 km and do a very early start on Thursday in order to make it in time to the Thai embassy.

Misty morning when leaving our hosts in Kasi

When we set out in the early hours it was still misty and a bit cold but as soon as the sun came up, it chased away both the mist and the nice temperatures. We stopped to have breakfast in Vangvien which is a famous tourist town.

At 17.00 we saw a nice looking motel. We still had about 35 minutes to sunset, but we were satisfied since we had reached within striking distance to Vientiene so we decided to check in at that motel. The place looked good and had a huge garden, but there was nobody there and we were close to giving up when someone finally turned up. Investing in a nice motel but not have any staff to take care of guests looks to me as a recipe for a future bankruptcy.

Our bikes were loaded at 5.45 the next morning and we set out in complete darkness. The dawn came not long after and at 6.15 it was full daylight. 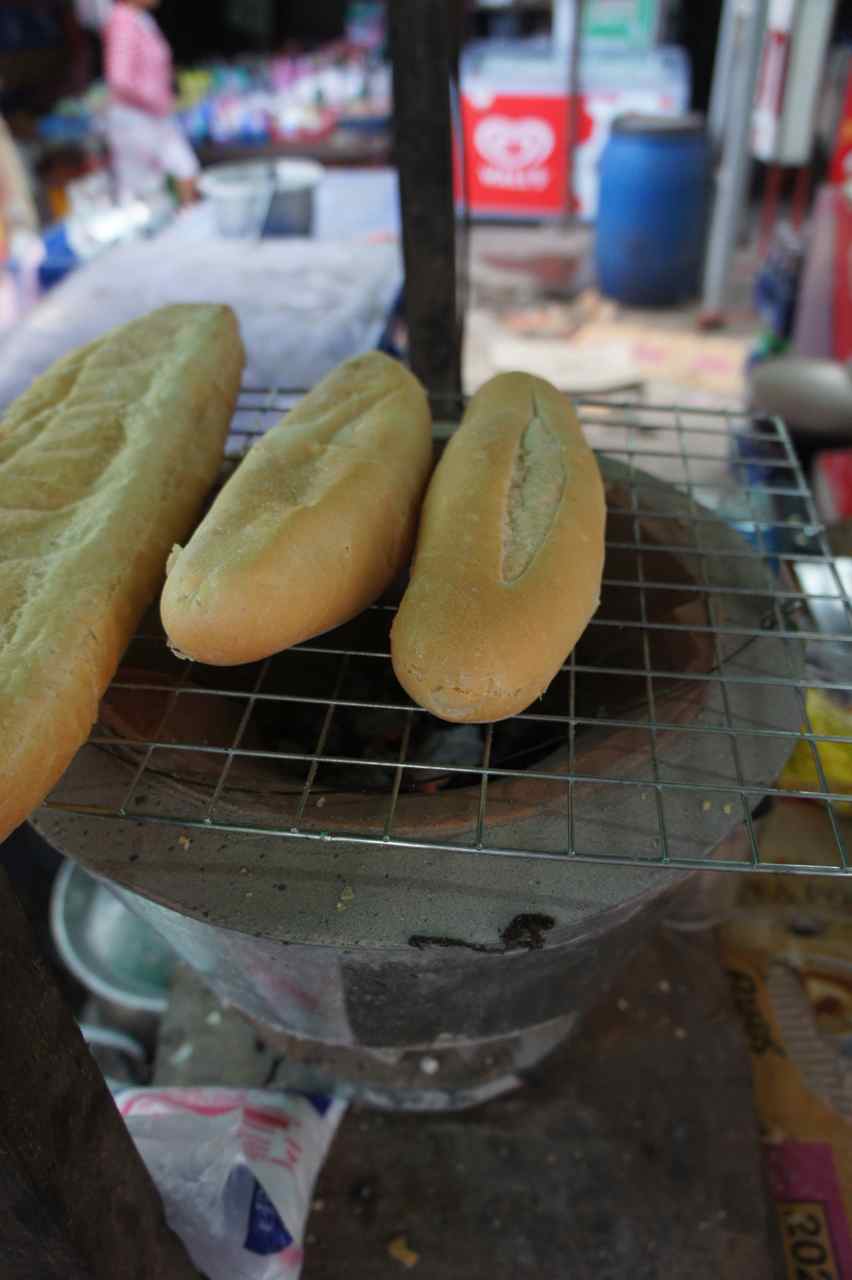 Laos used to be a french colony and being a colonized by foreign masters must be national tragedy on an astronomical level but at least there was one little small advantage in being colonized by France – the ”khao jii”.

Think of a freshly baked french baguette, think of it grilled over a charcoal fire and filled with yummy indigenous laotian fillings such as sweet hairy pork (moo yo), pork paté, coriander and spicy sauses. It is a perfect mix of local cuisine and french baking traditions. We had it every morning when we visited Vientiene 8 years ago and when we arrived in Luang Prabang we wanted to have it again, but in Luang Prabang they don’t grill the baguettes first which is a major mistake that won’t make them anywhere close to as tasty as the grilled ones that are for sale here in Vientiene. 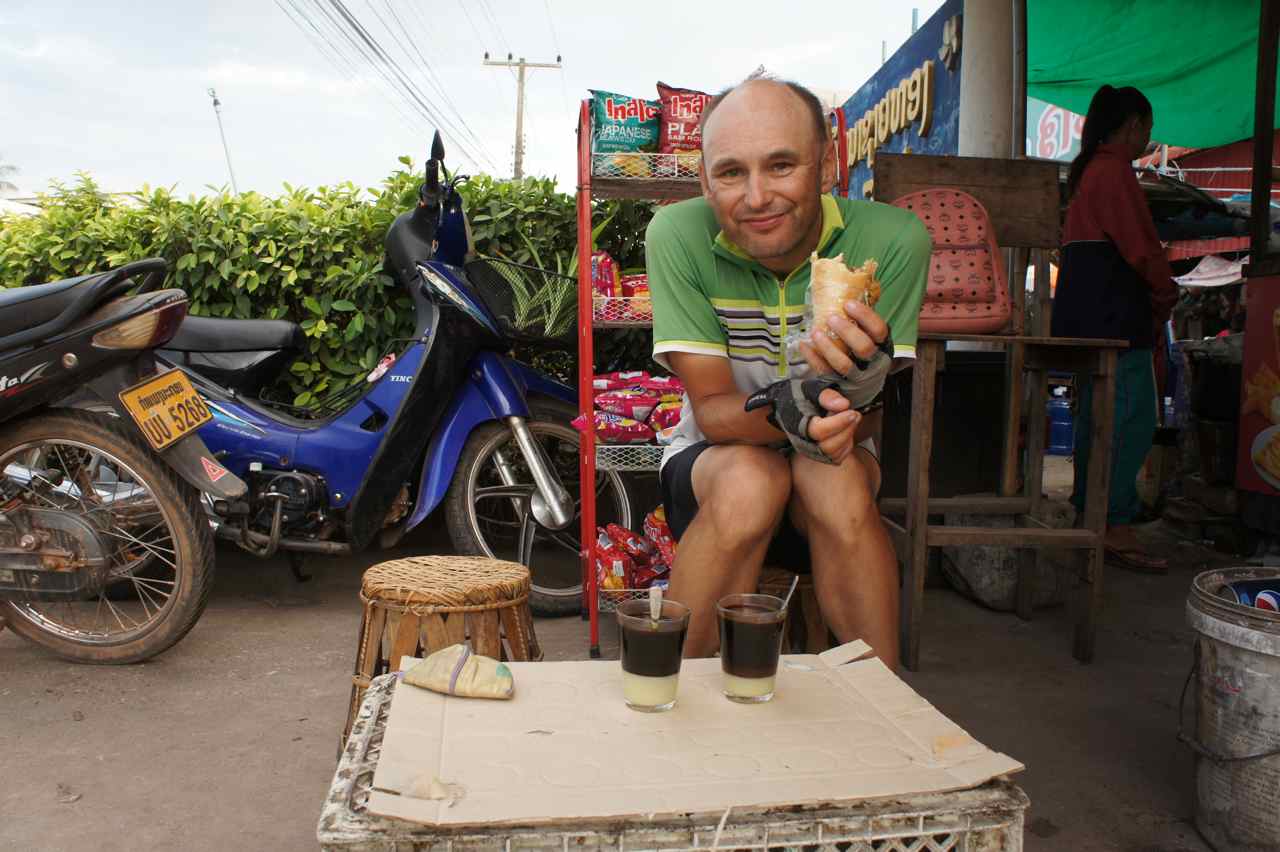 Breakfast at a food stall along the road consisting of a grilled baguette and a strong laotian coffee. This rocket fuel brought us to the Thai embassy long before it closed for the day

A ”khao jii” baguette should be grilled on the spot and served with the very strong and sweet Lao coffee. We have enjoyed it every morning we have been here and it is a reason in itself to some day return….

We made it in time to the Thai embassy and today I got my passport back endorsed with the last visa and we are prepared to cross the 14th border into the 15th and final country of this journey. 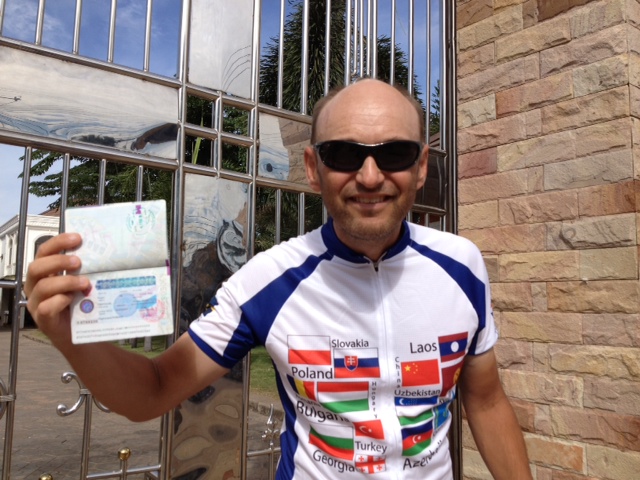 Happy after having secured the final visa on this tour

And being in the fourth capital city on this tour we had to get the photos taken in front of its most wellknown landmark, the Pratu Xai…. 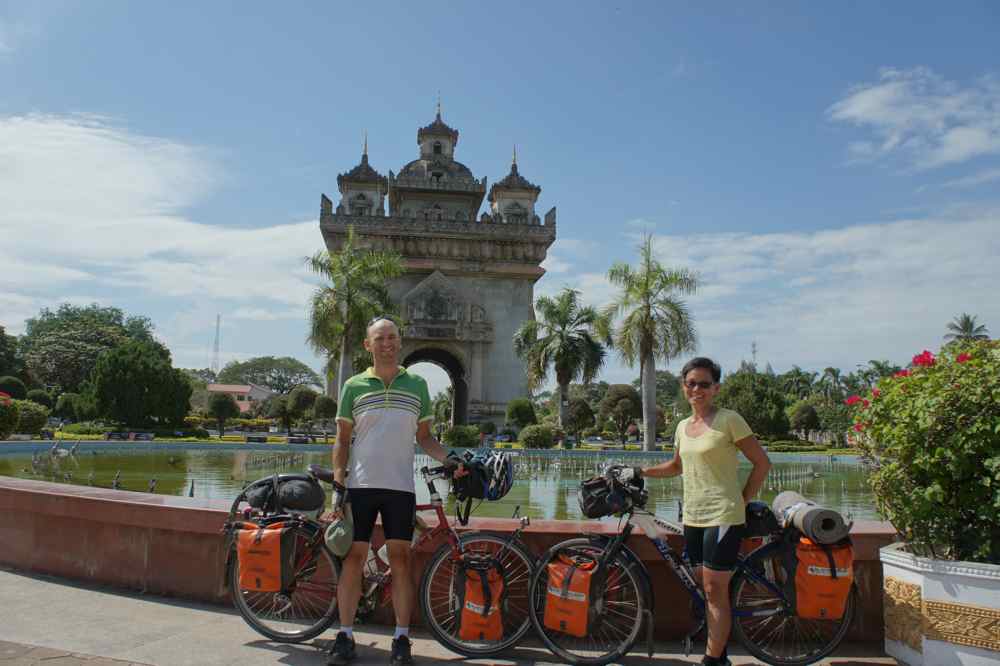 At the Arc de Triomphe in Vientiene

We try to carry a minimum of equipment on this tour and I think all of you have seen my white and green cycling jersey so many times now that you are fed up with it. Well think of me then… It’s the only one I have and I have been wearing it almost every cycling day since Bulgaria and I have handwashed it in wash basins in public toilets, streams, lakes, showers or anywhere else where there has been some running water, but rarely in a washing machine.

Take a good look at it in the photo below because it is the last time you will see it…. 🙂 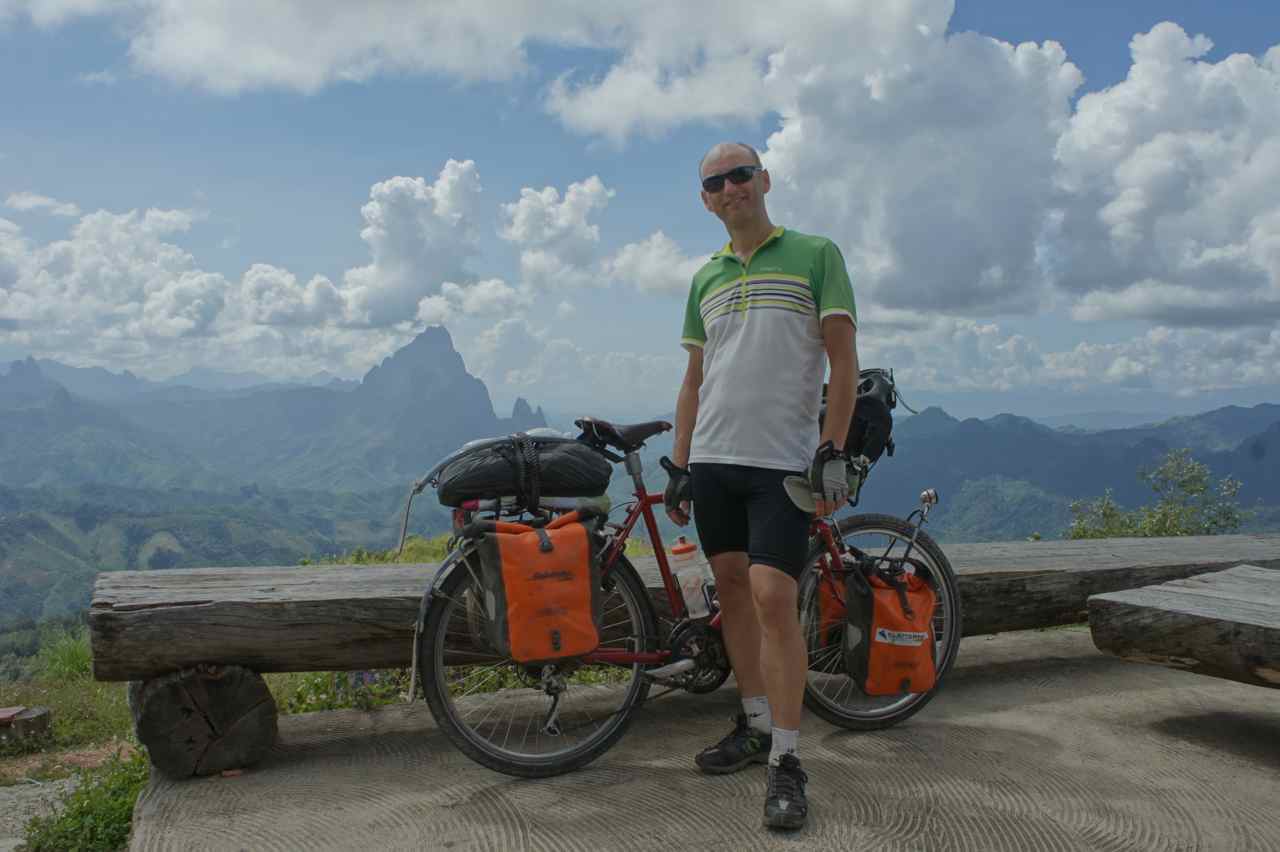 Our dear N’Arm and her friend Kong have designed the logo that is on our business card and now they have even designed new cycling jerseys for us. We got them delivered to our hotel this morning and we are more than satisfied and owe both of them a big thank you. We will wear these cycling shirts with pride from tomorrow morning when we cross the Mekhong river into Thailand and all the remaining way to Bangkok. 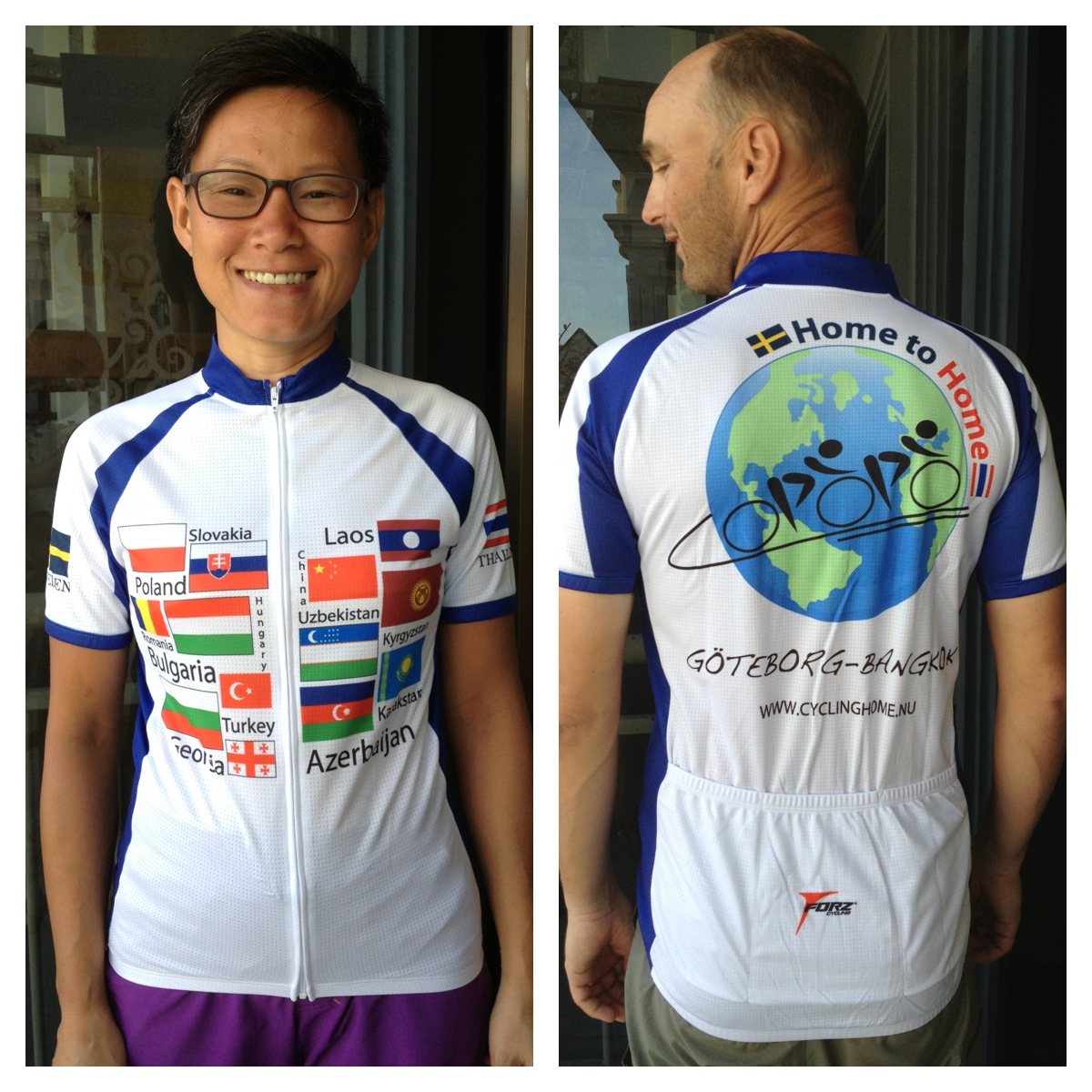